Norwegian Air has announced it is canceling its whole long-haul network and will look to focus on domestic operations within Norway and some European routes.

A new business structure outlined by the company’s Board of Directors has proposed a fleet of 50 narrowbody aircraft in operation for 2021, rising to 70 by the end of 2022. Currently, the airline and its subsidiaries have 132 aircraft in service.

“Our short-haul network has always been the backbone of Norwegian and will form the basis of a future resilient business model,” said Jacob Schram, CEO of Norwegian.

This includes around 37 Boeing 787-8 and -9 Dreamliners which, as part of the new business strategy, become redundant for future operations. The fleet has been grounded since March 2020.

According to the airline, customers with affected bookings will be contacted and will be refunded.

The remaining fleet is made up of Boeing 737-800 and MAX 8 aircraft. The airline also has 30 orders for the Airbus A321LR which were penciled in to be delivered this year, although the impact of the drop in air travel is likely to see this pushed back again. These were due to be delivered back in 2019 as the carrier was under significant financial stress even before the COVID-19 pandemic.

The decision by Norwegian will mean up to 1,100 long haul crew members will lose their jobs who were based at Gatwick alone. It also means operations out of France, Italy, Spain and the United States will see insolvency practitioners becoming involved in the shutdown. 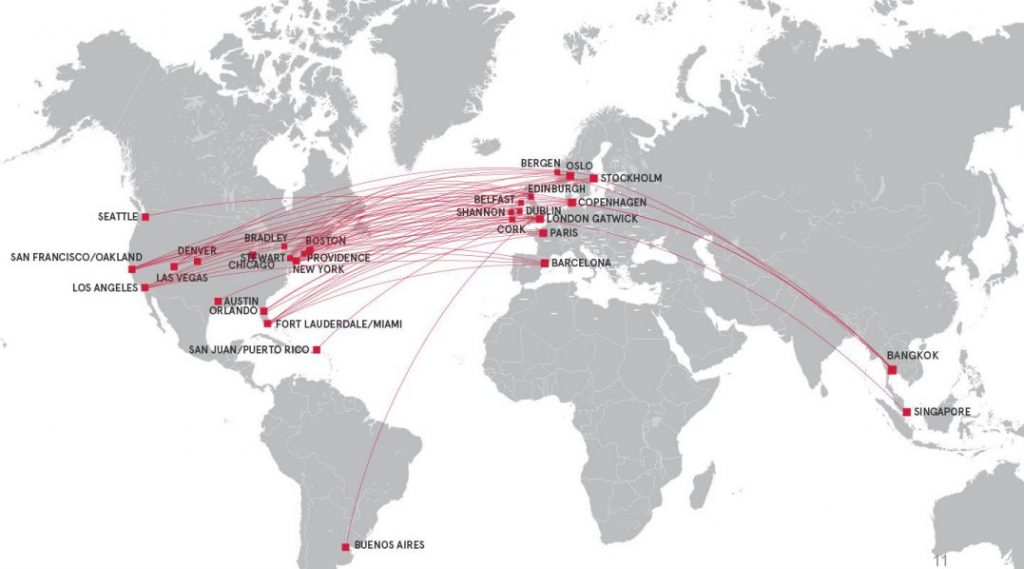 “Our focus is to rebuild a strong, profitable Norwegian so that we can safeguard as many jobs as possible. We do not expect customer demand in the long haul sector to recover in the near future, and our focus will be on developing our short-haul network as we emerge from the reorganization process, said Schram. “It is with a heavy heart that we must accept that this will impact dedicated colleagues from across the company. I would like to thank each one of our affected colleagues for their tireless dedication and contribution to Norwegian over the years.”

In a letter to staff, the Executive Vice President Guro H. Poulsen said, “This means that Norwegian Air Resources U.K. Limited (the Company), as well as the two related group affiliates operating in the U.S., France and Italy will now probably cease to trade.”

Regarding the business proposal, the carrier will aim to reduce its debt to around NOK 20 billion ($2.3 billion) whilst raising NOK 4-5 billion ($550 million) in new capital. According to the company press release the airline has received “concrete interest in the participation in the private placement.”

In the future, Norwegian will only operate within Norway, the Nordic region and “key European destinations”.

“I am pleased to present a robust business plan today, which will provide a new start for the company. By focusing our operation on a short-haul network, we aim to attract existing and new investors, serve our customers and support the wider infrastructure and travel industry in Norway and across the Nordics and Europe,” said Schram.

Reacting to the news, the British pilot union, British Airline Pilots Association (BALPA), said of the decision to shut down the U.K. arm of the company as “devastating for all Gatwick-based crew”.

General secretary of the union, Brian Strutton, continued to say, “The airline has struggled in the face of the ongoing COVID crisis, despite the combined efforts of all the company’s recognized trade unions, who have worked tirelessly to remain flexible and accommodating.

“The airline has failed for several reasons but there can be no blame apportioned to the pilot, crew or other staff groups,” he added.