KLM Royal Dutch Airlines’ subsidiary KLM Cityhopper has taken delivery of its first Embraer E195-E2 aircraft, registered PH-NXA. The aircraft will be the first of the type in the regional airline’s fleet and is leased from ICBC Aviation Leasing. The delivery took place at Embraer’s production facilities in Brazil.

The delivery is the first of 25 aircraft currently on order by the carrier with options for ten additional aircraft should the airline wish to exercise them. Of the 24 remaining aircraft to be delivered, nine will be leased from ICBC Aviation with the remaining 15 leased from Aircastle Limited.

In a press release, Warner Rootliep, Managing Director of KLM Cityhopper, said, “The new E2 is really going to make a difference. The addition of the E195-E2 to our fleet is a vital part of our plane to reduce our carbon footprint at least 50% per [passenger/kilometer] by 2030.”

KLM Cityhopper already operates types from the Embraer E-Jet family with a mix of Embraer E175s and Embraer E190s currently in the fleet. At the time of writing, the airline operates 17 E175s and 32 of the larger E190s.

Not only will the E195-E2 be the newest, most efficient type operated by the airline, it will also be the largest. While the E175 and E190 seat 88 and 100 passengers respectively, the E2 will be laid out in a 132 seat configuration. The aircraft will be split into three classes with 20 business class seats, 8 economy comfort seats, and 104 economy seats. 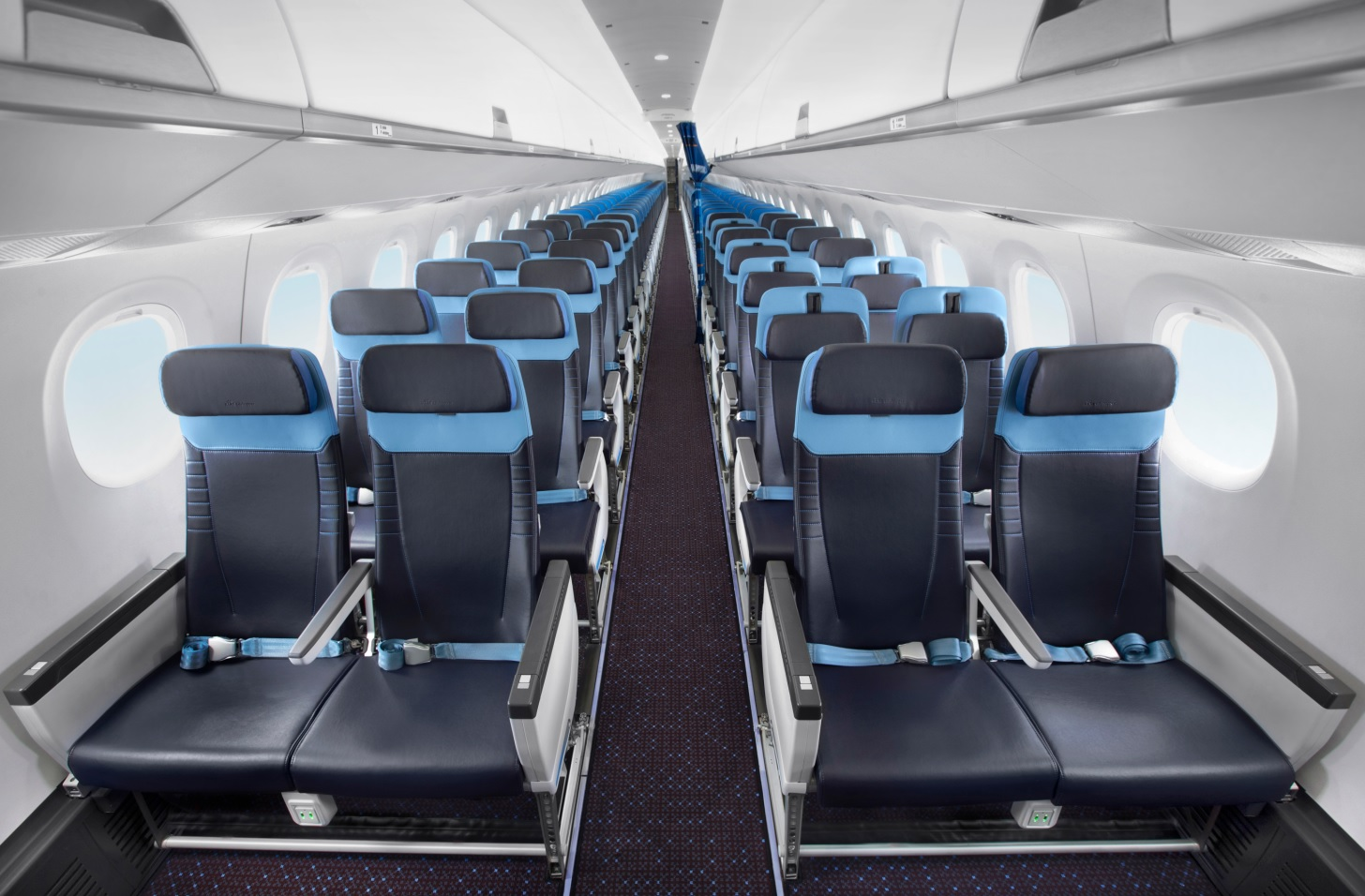 Up close with the interior of KLM Cityhopper’s E195-E2. (Photo: Embraer)

Due to technological advancements, the E2 family of aircraft offer much lower emissions and noise levels compared to their older counterparts. According to Embraer, noise footprint of the E2 is 60% smaller while carbon emissions are nearly 10% lower per trip.

Boeing and Southwest Airlines on Monday announced a new order for 100 Boeing 737 MAX aircraft, with options for an…

The International Air Transport Association (IATA) has set an ambitious goal for global air travel emissions: cut the CO2 the aviation industry emits by 50% of 2005 levels by 2050. Airlines are at different stages in their adjustments, with some carriers clearly breaking out as clear leaders in the fight…

Amid a slowdown in transatlantic travel, Air France is launching a new service to Denver, increasing its total U.S. destinations…

SKY continues to bet on the Peruvian connectivity and inaugurated new interregional routes this week. According to alnnews, this April…

American Airlines has announced a new expansion for its upcoming summer schedule. In response to strong demand, the airline expects…