On Thursday, Ecuadorian startup Ecuatoriana Airlines released its branding and livery on its social media platforms, making it one step closer to a potential launch in October of this year.

Ecuatoriana is the launch of a new airline startup in Ecuador, named after the defunct national airline of Ecuador, Ecuatoriana de Aviación, tapping into the nostalgia of the Ecuadorian people. The now-defunct carrier was launched in 1957, steadily growing as a government-owned carrier until 1993, when it faced troubles amid an economic crisis at the time. The airline was privatized in 1995 before facing further economic difficulties in 2000 and ceasing operations in 2006. In the past, the iconic Latin American brand operated long-haul services to North American destinations like Chicago O-Hare, Miami, Los Angeles, and New York’s JFK International Airport.

The launch of the new Ecuatoriana fills the regional connectivity hole left by the liquidation of TAME, another former flag carrier of Ecuador that arose after the demise of Ecuatoriana de Aviación. According to CEO Eduardo Delgado, 85% of Ecuadorian airports are left unserved due to the pandemic, leaving room for growth amid a global health crisis. Currently, the main competitors to Ecuatoriana are the two main Latin American airline groups: Avianca Ecuador and LATAM Ecuador offer basic connectivity throughout Ecuador using Airbus A320 family aircraft.

Ecuatoriana aims to be a low-cost carrier, offering lower costs via new technology and low operating cost on its Bombardier Dash 8 Q400 aircraft.

In a webcast event for the announcement of its branding, CEO Eduardo Delgado revealed the airline’s launch timeline and its potential routes. Its CEO stated that Ecuatoriana could receive its aircraft operating certificate between September and October, launching flights in October. The carrier’s inaugural flights between Quito to Guayaquil would be simultaneous and operated by a fully female crew.

Ecuatoriana’s logo features a blue, cyan, yellow, and white color palette, with a tri-colored hummingbird as the icon, representing Ecuador’s biodiversity and culture. Meanwhile, its Boeing 717 aircraft will feature different variations of its scheme via different colors on its tail. 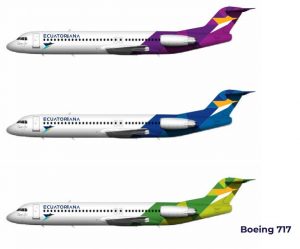 The designer in charge of the project, José Luis Iturralde, wanted to remove any distinction between the new startup Ecuatoriana and TAME, the former flag carrier. Additionally, he wanted to create a product that represented Ecuador’s national identity, painting it in an elegant and luxurious light. “The airline does not necessarily have to carry the colors of a flag. They carry the colors of the beauty of Ecuador,” said Iturralde, according to Aviaciononline.

Ecuatoriana is not the only South American startup this year. Another airline that is launching flights soon is Itapemirim, a Brazilian low-cost carrier, which received its first Airbus A320 in February, though flights are unknown when to start. Meanwhile, other carriers are growing amid a plethora of airline bankruptcies between Latin American legacy carriers. For example, Viva Air announced 26 new routes in 2021, part of its growing route network in Colombia.