It is once again time for another Essential Air Service (EAS) trip report. Just like my journey on Air Choice One, this trip is another unique experience that connects two larger cities using a small EAS community.

For this trip I will be flying from Nashville to Pensacola, Fla. with a stop in the small EAS community of Muscle Shoals, Ala. with Boutique Air. While Southwest does offer a Nashville to Pensacola nonstop flight, I’ve always said “Why pay more to fly less” as Southwest’s nonstop was actually the more expensive option in this instance.

On the day of the flight, I was actually flying into Nashville on another airline. Usually, passengers walk in the sterile area between any two gates, but due to construction at the airport, which is due to last until 2023, Concourses A and B are separated from Concourses C and D.

So if you fly into Nashville on Allegiant Air, Alaska Airlines, American Airlines or Southwest Airlines, make sure to give yourself some extra time to walk over to the other concourse to re-clear security. If you flew into Nashville on a different carrier, you can just head right to the gate.

I did have to walk and re-clear security, but I didn’t mind this as it gave me a chance to check out the carrier’s check-in area. Boutique Air’s check-in counter is located on the north side of the airport between JetBlue and Cape Air. 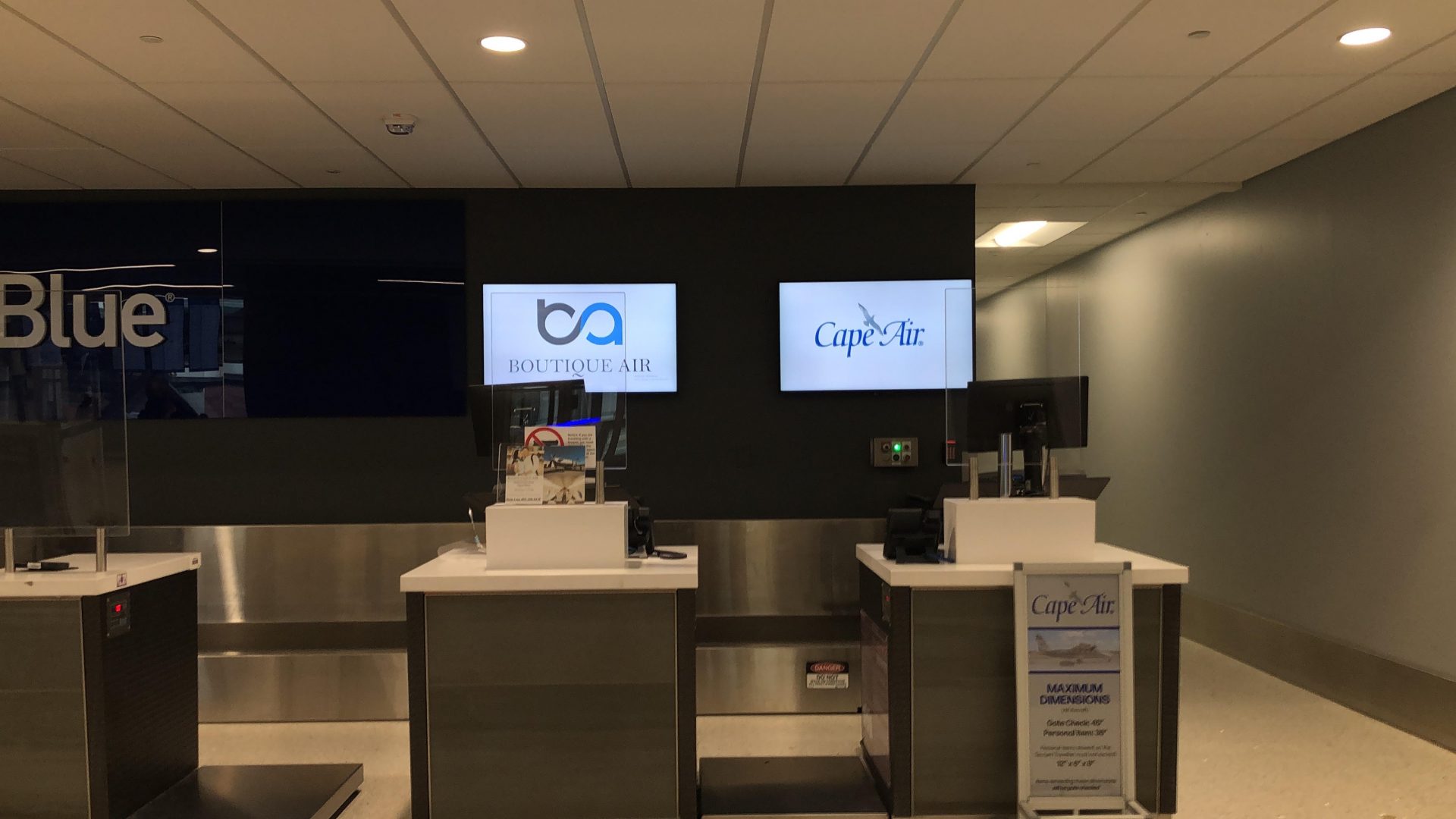 Nobody was at the counter yet, which makes sense as I was incredibly early and it was still three hours before my flight was scheduled to depart. So I headed to the carrier’s website, checked in online and got a mobile boarding pass for both legs of my trip. 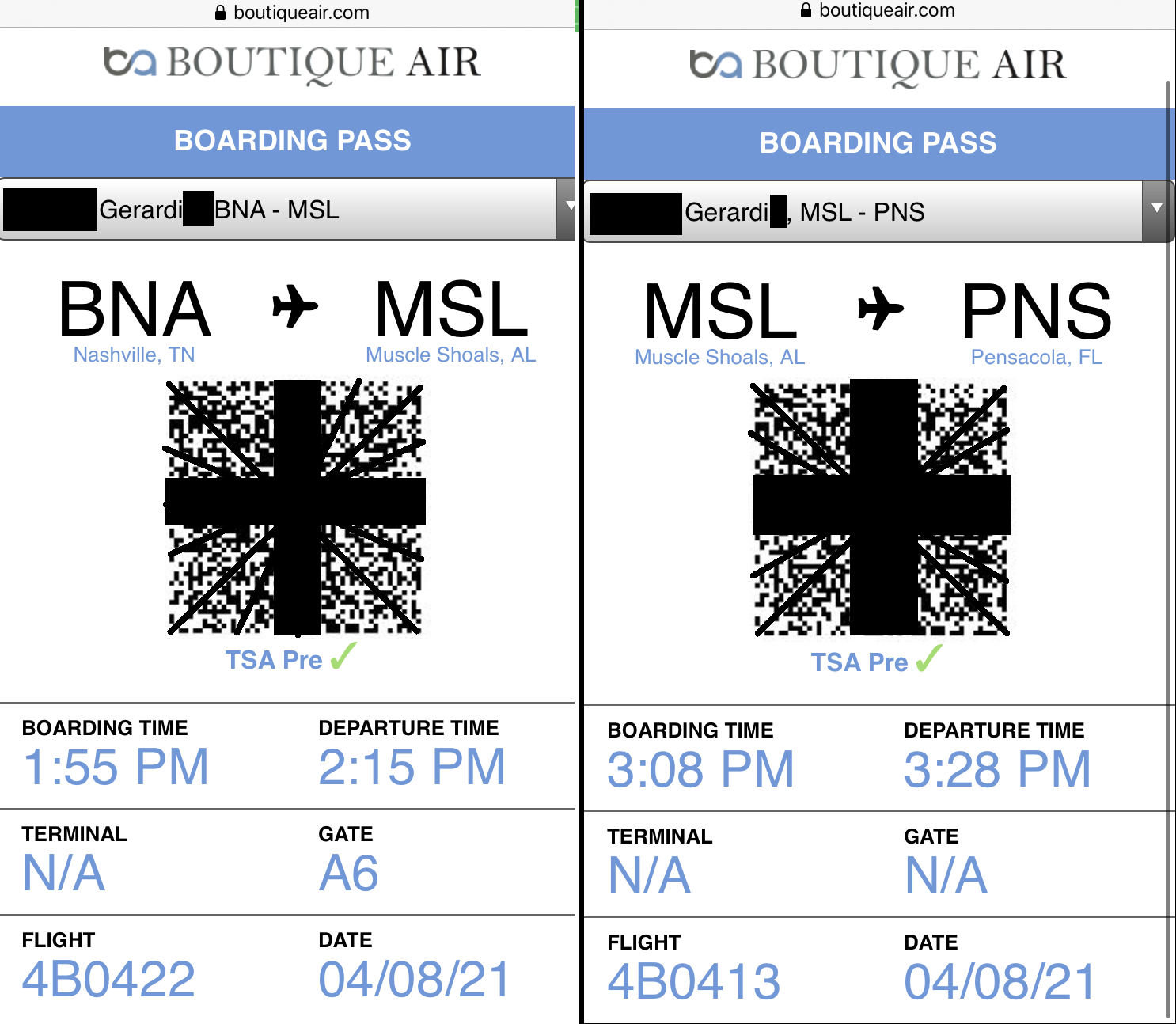 Boutique Air offers two online check-in options. Once you’ve checked yourself in, you can opt for a mobile boarding pass like the one I received, or, if you have access to a printer, you can click the second option, which will email you a PDF version of your boarding pass so that it’s in an easier format for printing.

As I entered my KnownTravelerNumber (KTN) when the flights were booked, I was eligible for TSA-PreCheck, as the carrier is one of the many airlines that participates in it. The check-in counter for the carrier is located only about ten feet from the entrance to the North security checkpoint, which was really convenient. 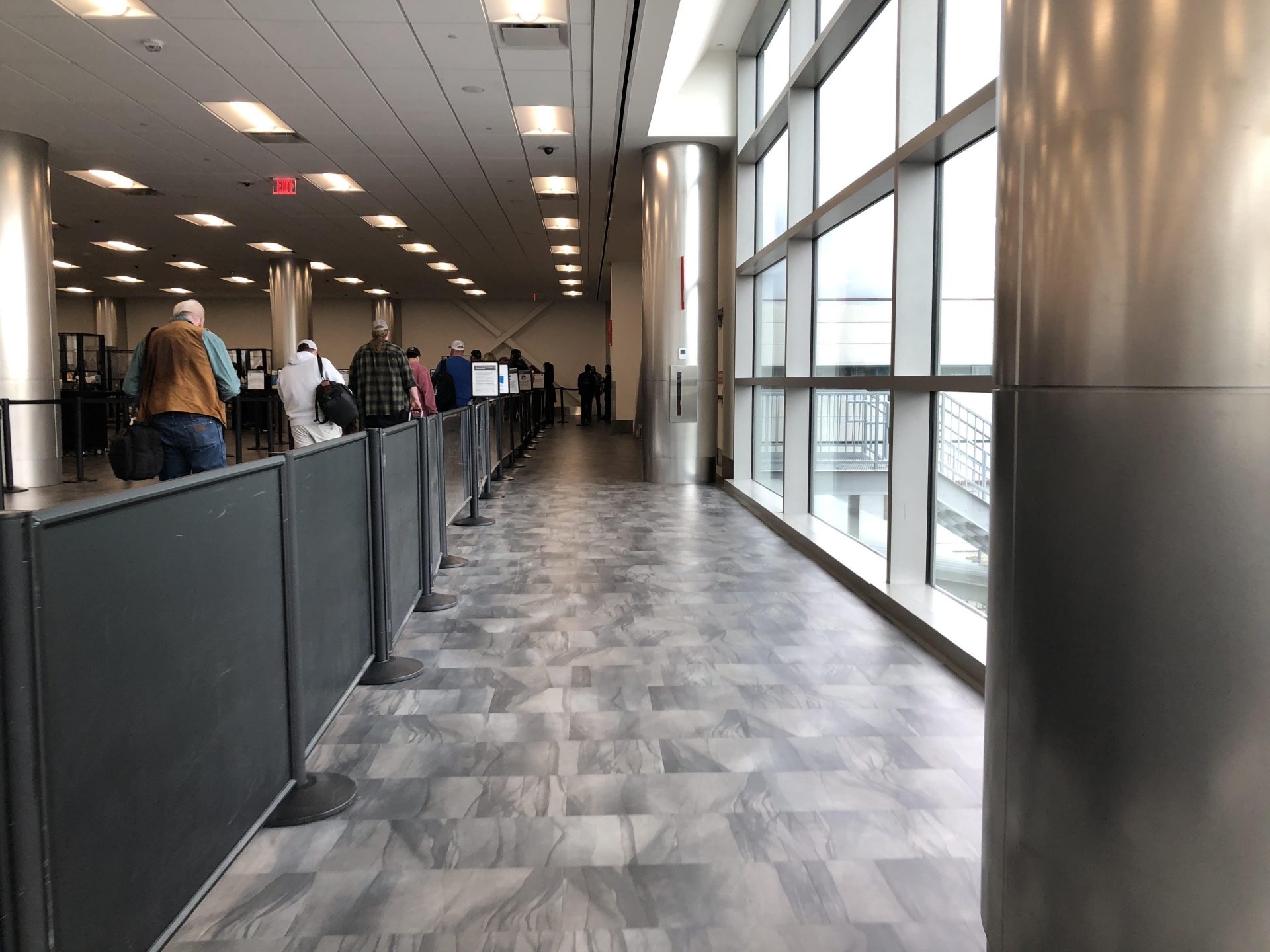 The regular line did have quite a crowd and snaked back and fourth multiple times, while the PreCheck line was practically empty and had only a couple of people in it. After proceeding through security. I began to make the walk down the A concourse to my gate, A6. 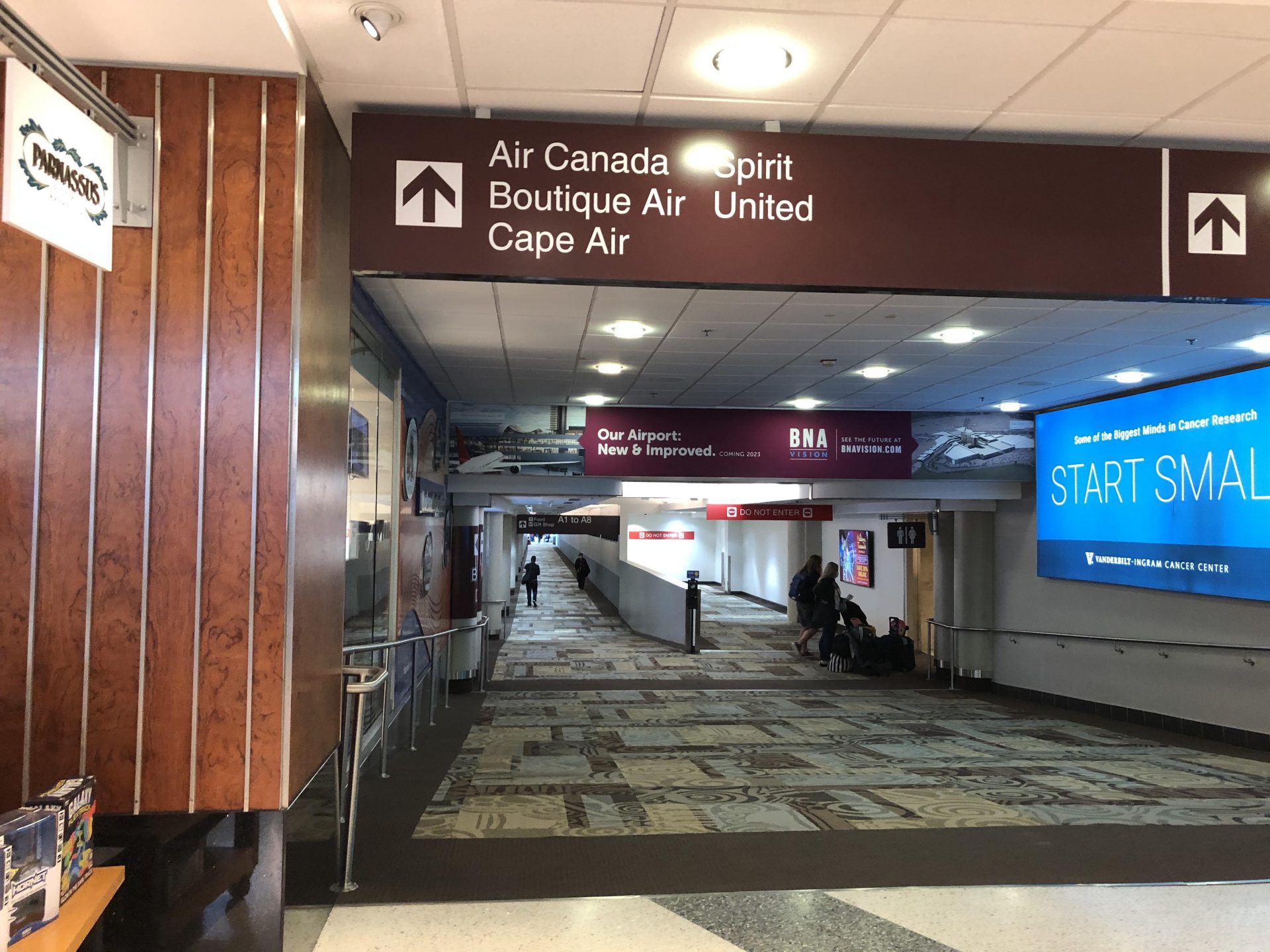 While walking down the concourse, I got a flight update text message from the carrier, which I did sign up for when the tickets were booked: my first flight had been delayed about one hour. This was followed by another text notifying me of the delay for my second flight.

The text message from the airline (Photo: AirlineGeeks | Joey Gerardi)

I did expect a delay, as there was some stormy weather in the area that morning, and the carrier usually uses the same plane for the entire day of flights.

For reference: MSL refers to Muscle Shoals, ATL refers to Atlanta, PNS refers to Pensacola, and BNA refers to Nashville.

The entire routing for the aircraft in a single day goes MSL-ATL-MSL-PNS-MSL-BNA-MSL-PNS-MSL, and I was picking up the aircraft in the middle of its day. So this means a weather delay in the morning will delay the remaining flights for the day. This is something you risk when you fly smaller carriers, but due to the fact it was the same plane taking me all the way to Pensacola, there was zero risk of missing a flight.

I continued to head to the gate to meet up with a Boutique Air personnel. Although I checked in online, passengers are still required to check with an airline staff member to get their weight and the weights of all their bags for weight-and-balance calculations. This practice is due to the size of the aircraft. 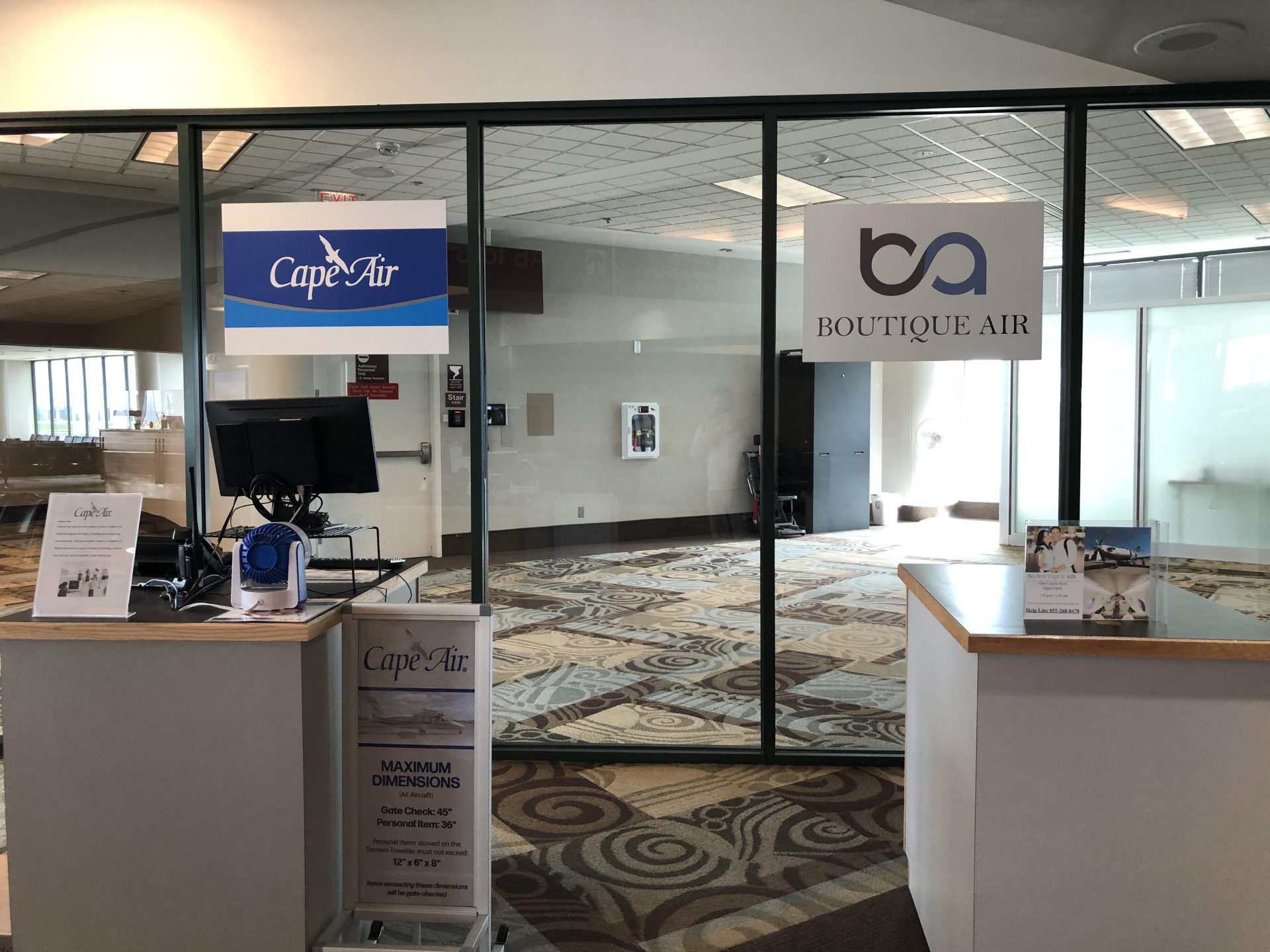 Similar to the check-in counters, Cape Air was located along side Boutique, as they also operate flights using smaller turboprop aircraft. After getting my weight, the staff member said I was free to leave the gate area as long as I was back 30 minutes before our new departure time.

After grabbing a bite to eat in the terminal, I headed back to the gate area, more specifically A7 this time, as this is where the stairs to the ramp are located. 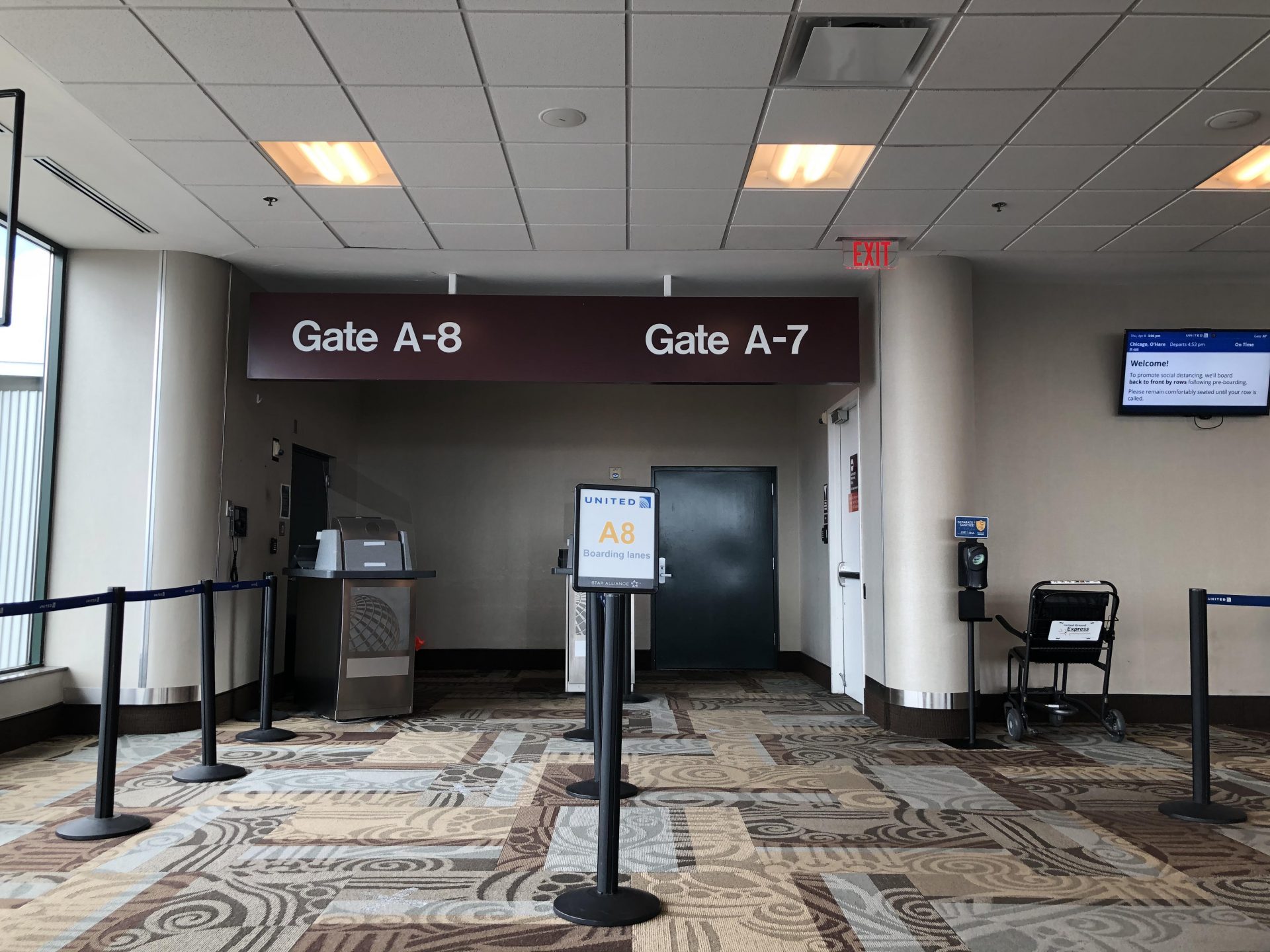 Gate A7, where the stairs to out ground boarding gate were located (Photo: AirlineGeeks | Joey Gerardi)

I then found a nice spot in the terminal near our gate to watch landing aircraft and began to track our inbound aircraft. While sitting at the gate, I was approached by what turned out to be one of my fellow passengers, and they asked me if I knew whether or not their bag would fit in the overhead bin of the aircraft. I chuckled and responded with, ‘what overhead bins.’

A lot of people who book flights between two large cities with the carrier don’t know what they have booked a trip on. Most book the flights on a third party website or through American and United’s websites, so when they show up at the airport the fact they are flying an 8-seat prop plane is a shock.

As I was talking to the other passengers, I watched our aircraft glide onto the runway, passing in front of the Nashville skyline just before touchdown. 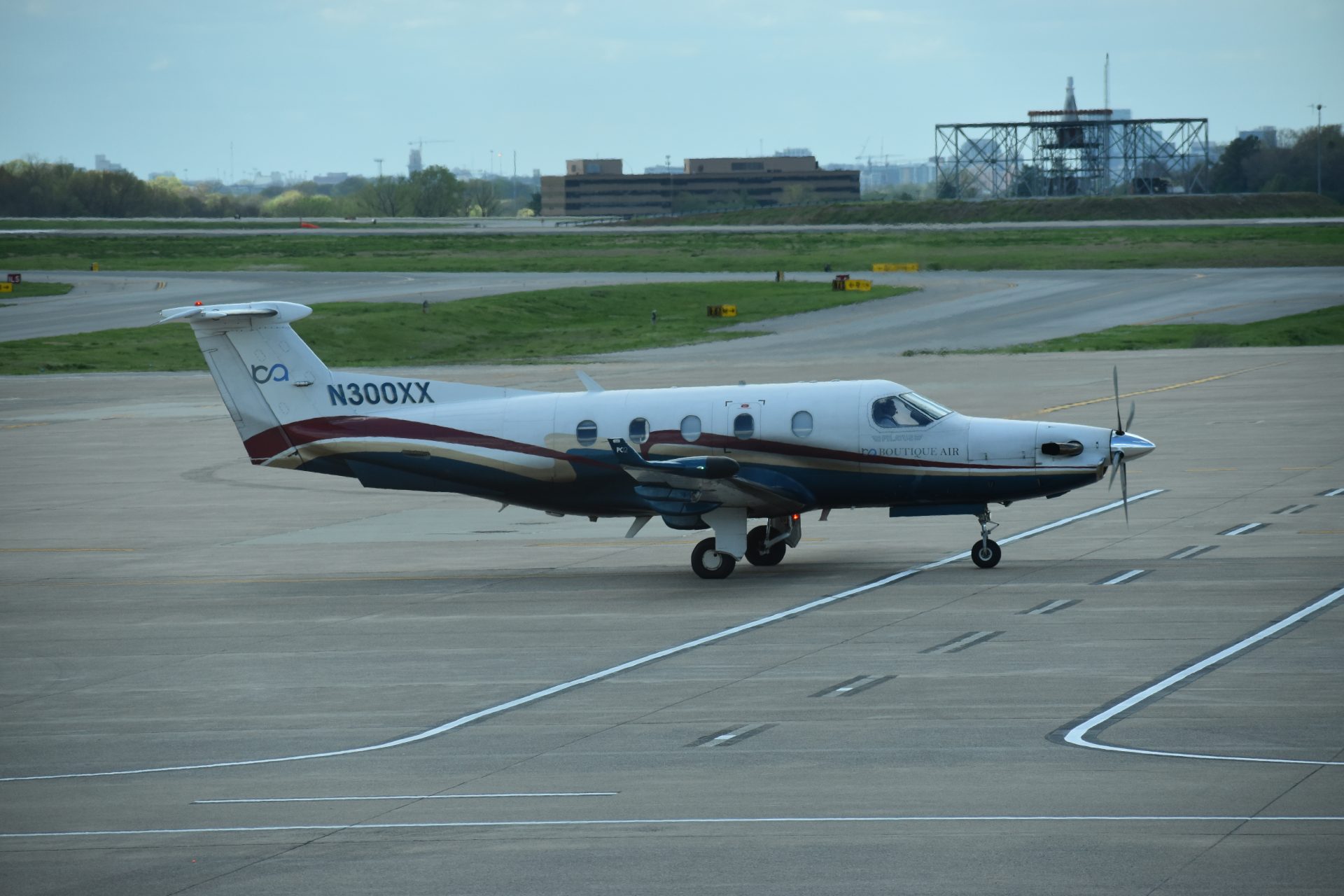 While taxiing by the window, I pointed out to the passengers that this aircraft was ours. They all laughed nervously at nearly the same time, by this point I knew this flight was going to be a fun one not only for me, but an experience the other passengers wouldn’t forget.

Make sure to tune in next week to see how the rest of my trip went.