On Thursday, American Airlines announced its latest venture into the South American market, signing a letter of intent with Chilean ultra-low-cost carrier JetSMART to create the “broadest and most rewarding network in the Americas.”

In a statement, the Fort Worth, Tex.-based carrier revealed that it plans to purchase a minority ownership stake in JetSMART, as part of a partnership and codeshare agreement with the Indigo Partners-backed carrier. In addition, American Airlines and Indigo Partners – the group behind successful carriers like Frontier Airlines, Volaris and Wizz Air – can jointly supply the capital to facilitate further growth in South America for JetSMART. 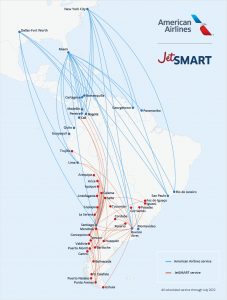 In its press release, American Airlines Chief Revenue Officer, Vasu Raja, states, “This proposed investment in JetSMART would give customers access to the largest network, lowest fares and best travel loyalty program in the Americas. This would enable JetSMART and American to grow aggressively and profitably across Latin America as demand recovers whilst preserving the best aspects of each carrier’s business model.”

While JetSMART does not currently offer a frequent flyer program, American Airlines frequent flyers can utilize and earn AAdvantage miles on JetSMART flights. Vasu Raja adds, “This partnership would also make AAdvantage the largest travel loyalty program in the Americas, creating more ways for customers to earn travel rewards and use their miles to access new destinations and elite benefits globally, no matter whether they earn in Latin or North America.”

Right now JetSMART operates to 33 destinations throughout South America, primarily in Chile and Argentina. While GOL has a premium economy cabin, JetSMART has no premium cabin to service business travelers connecting onto the airline. It utilizes 20 Airbus A320-family aircraft, a mix of Airbus A320CEOs and Airbus A320NEOs, featuring a full economy-class layout in a 182-seat configuration. In the future, JetSMART will receive 79 Airbus A320-family aircraft, allowing for further growth in South America via increasing frequency on existing routes and launching new ones.

Estuardo Ortiz, Chief Executive Officer of JetSMART, said, “By connecting and growing our respective networks and maintaining our distinct business models, we see a compelling value proposition. When completed, this proposed partnership would accelerate JetSMART’s path to becoming the leading South American low-cost carrier while expanding service for American’s customers.”