One of the things I looked forward the most to once I moved to Europe was insanely cheap travel – in other words, flying the continents’ ultra low-cost carriers (ULCCs). I always thought that was a myth and that fares were rarely low, but once restrictions started to be lifted and I started to look for flights, I realiszd: low fares here are a modus operandi rather than an exception.

So in this last month, I’ve had the opportunity to try, here in Italy, domestic flights with three of Europe’s largest ULCCs: Wizz Air, Ryanair and Volotea. The impressions with each of the three was enough to make for a three-part trip report, comparing the products of the three.

Now this first part of the trip report will be shorter because, when I took these flights, I was in a vacation mood, so I could not keep track of time and register everything, but I think it can portrait an overall good picture of the flight experience.

For those who are not familiar with the name, Wizz Air is an airline that, for most of its life, focused heavily on Eastern Europe, registering interesting profits along the way and eventually annoying Ryanair in some markets.

In the last couple of years, however, it started to grow further into Western Europe. COVID came and, instead of pulling the brakes, it sped up: benefitting from its huge cash reserves and leaner structure, it advanced into several markets there.

In Italy, it opened its first base in July 2020 at Milan Malpensa. Not satisfied, during the subsequent months, Catania, Bari, Palermo, Napoli and Roma Fiumicino followed.

From one of my two home airports, Pisa (the other one is Firenze, although this one is not served by the ULCCs), Wizz serves two cities in Italy, both in Sicily: Catania and Palermo. The other destinations are Bucharest and Tirana, though at the time I did not have the second shot of the vaccine, so I did not bother searching for tickets. Brindisi, in Italy, is also open for reservations, though for 2022 only.

Wizz’s website was awesome, very simple and intuitive. The fares search engine is even better: they never “hide” the lowest fares, which is one thing I always felt when booking back in Brazil; it’s really easy to find the sales since you can see all prices for each calendar month. 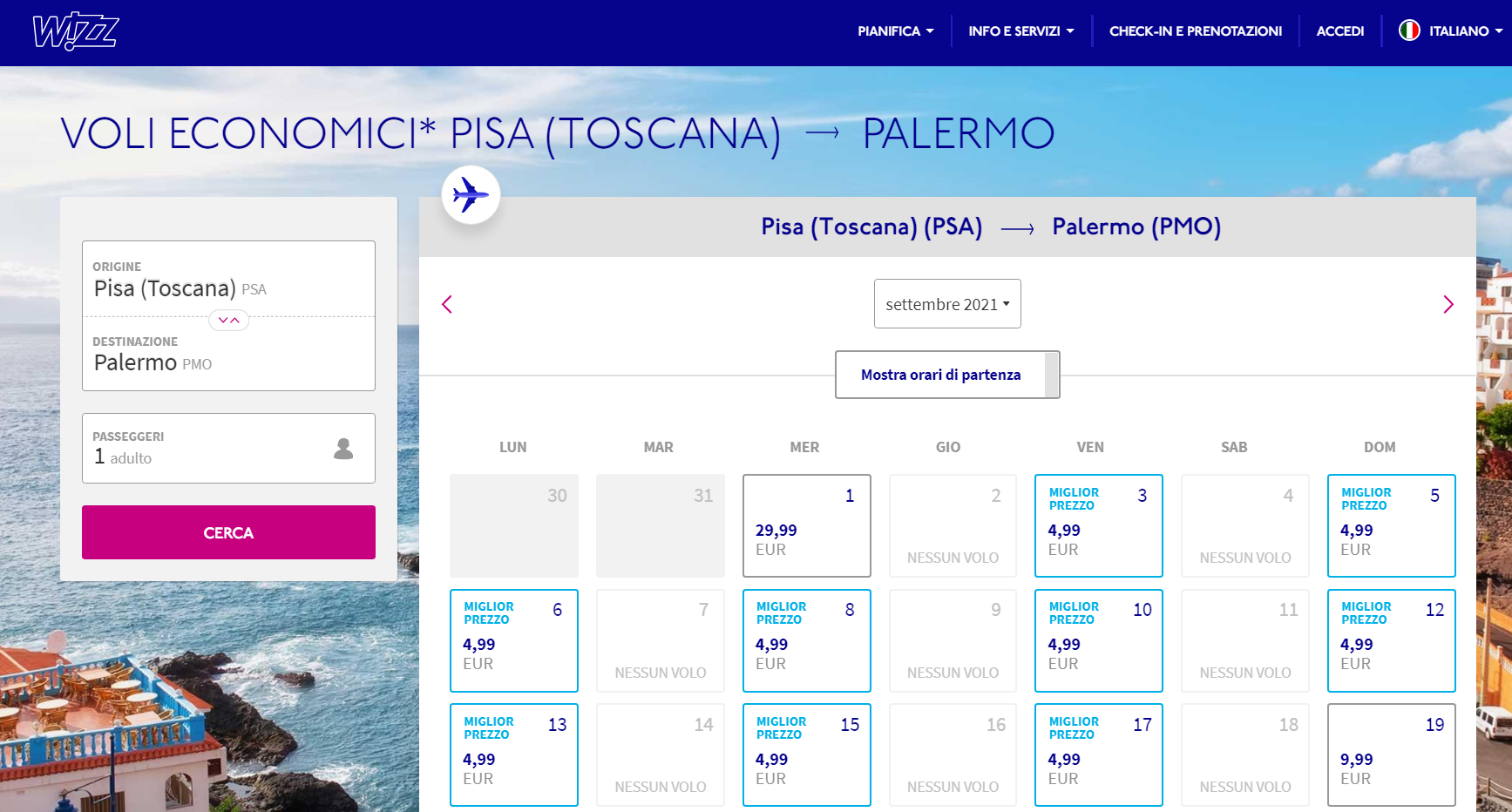 However, one thing I noticed was that the low fares were available really shortly in advance, which signed they could be struggling to sell the seats. But I benefited from it, opting for a one-night trip to Palermo.

The process of finishing the booking with the Europeans ULCCs, I learned with time, reminded me of the bomb doding scene in “1917”, as everywhere you look at they’ll be offering additional services; but that was not something exclusive to Wizz. I understand that this is part of their business model so I’m not complaining, but I think the airline gains credit with me if they manage to make the process less painful, while still attracting the customer to pay for such services. Wizz didn’t quite exactly manage this.

As soon as I got over the ancillaries jungle I got the roundtrip for EUR29.98 for the bare fare – it could have been less had I chosen other dates.

As the flight dates arrived, I could check-in via the app, which was very easy and fast to use. Because I chose not to pay for a seat, the airline system randomly chose one for me; thankfully I got a window, with seat 16F in my name. 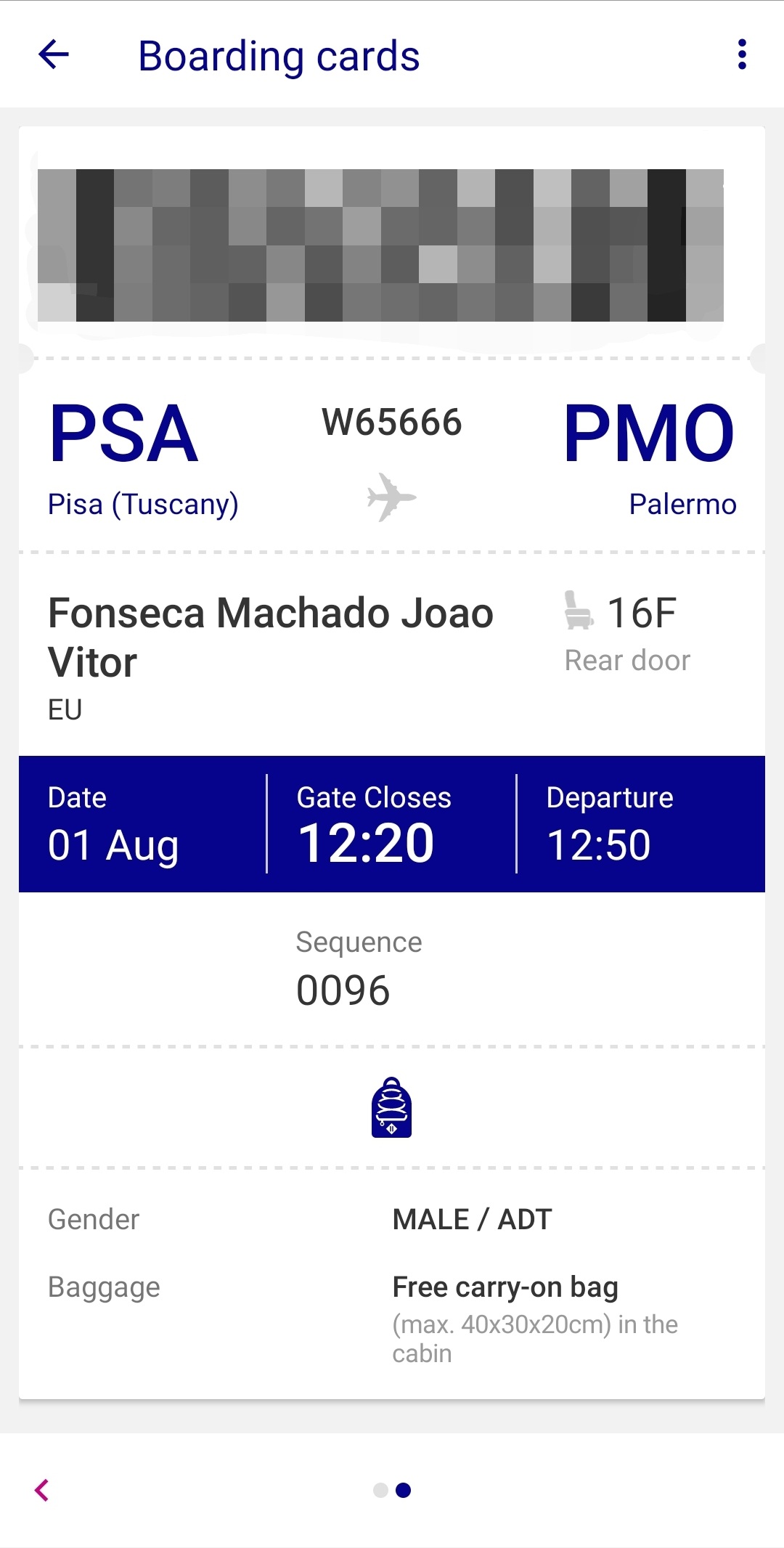 I’ arrived to Pisa Airport (a more detailed review about it will come on the second part), which was quite full, two hours before the flight. The safety screening had a little bit of line, but in 15 minutes I was airside.

I didn’t need to rush anyway. Apparently, Wizz has been struggling a lot with its on-time performance in Italy during this summer season, so my aircraft, which made a Palermo-Pisa-Palermo rotation, was delayed. So, even though departure time was 12h50, I only boarded the aircraft at 13h01. 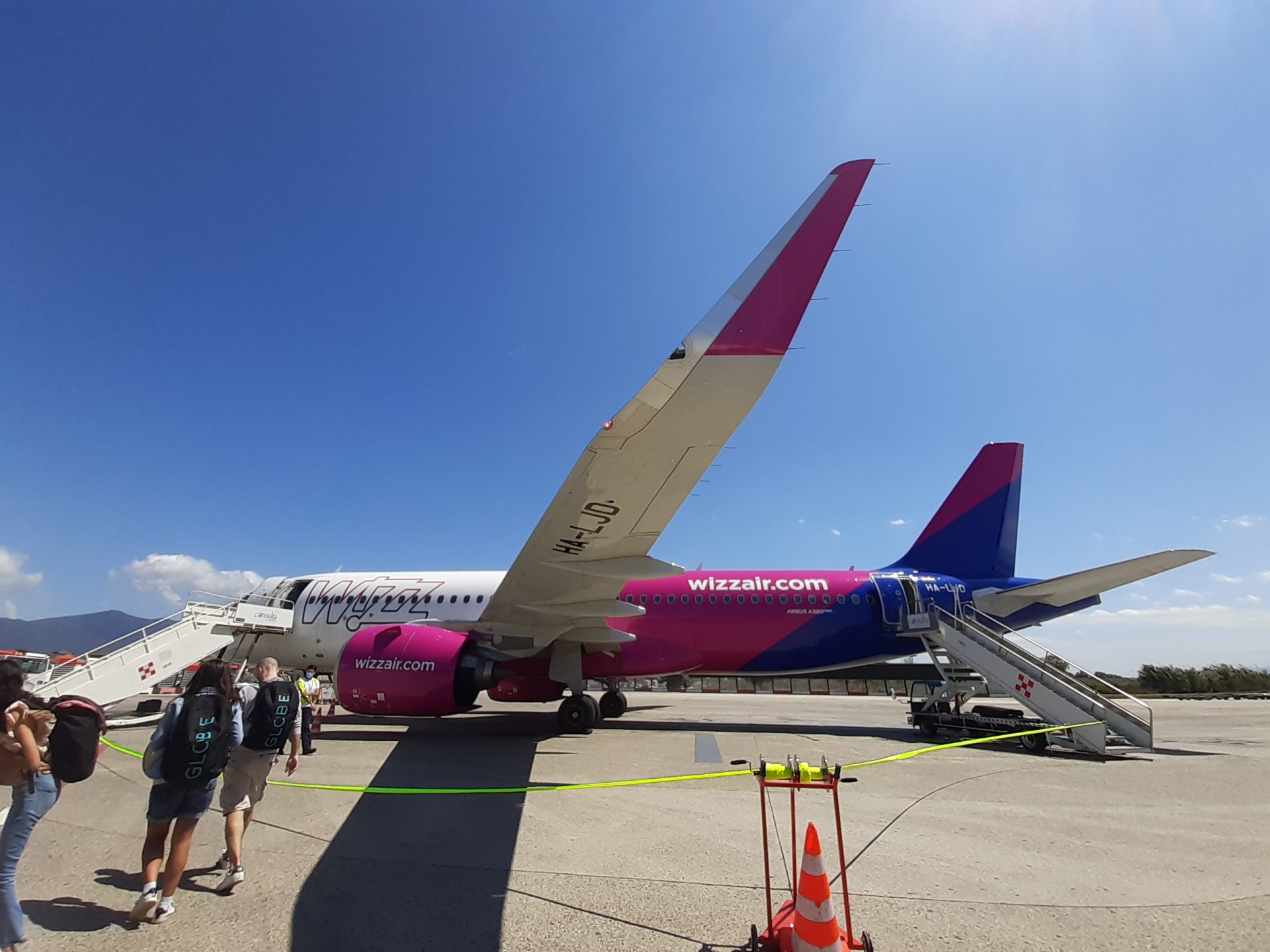 Nevertheless, the airplane was brand new. Wizz is putting its newest-generation aircraft in Italy, I think because competition is tougher here than in other markets. For this flight, HA-LJD was deployed; one of Wizz’s six Airbus A320neos, it was delivered to the Hungarian carrier in August of the previous year, according to Airfleets.

Despite the last-minute low fare I got, the flight was seemingly almost full. Taxi was started at 13h21, with a short trip to runway 22L leading to a smooth take-off at 13h25, with a 35-minute delay. The A320neo always impresses for its silence.

A left turn followed, so we bowed to Sicily, and as soon as the seat belt signs were turned off, the flight attendants started to prepare the buy-on-board service. I was interested to see what they would offer. Unfortunately, even though the menu in their inflight magazine (it surprised me they even had one!) promoted hot and fresh food for sale, they were only selling packaged snacks, so I just bought a coffee for EUR2.90, with a 10% discount as I paid with card.

The flight attendants all looked very polite and kind, and apparently most, if not all, spoke Italian. After the service was finished, duty free products were also offered.

I took the uneventful rest of the flight to read Wizz’s magazine. It looked more like a massive advertisement than a magazine – many airlines manage to reduce this impression – so it was not very interesting really. Soon the descent into Palermo was started.

Despite the 35 minutes delay upon departure, we managed to arrive at 14h30, 15 minutes after schedule. Not ideal by any means, but better than nothing.

Palermo Airport is overseen by Montagna Longa, which makes for a beautiful background. Hope I can return for some planespotting there eventually! 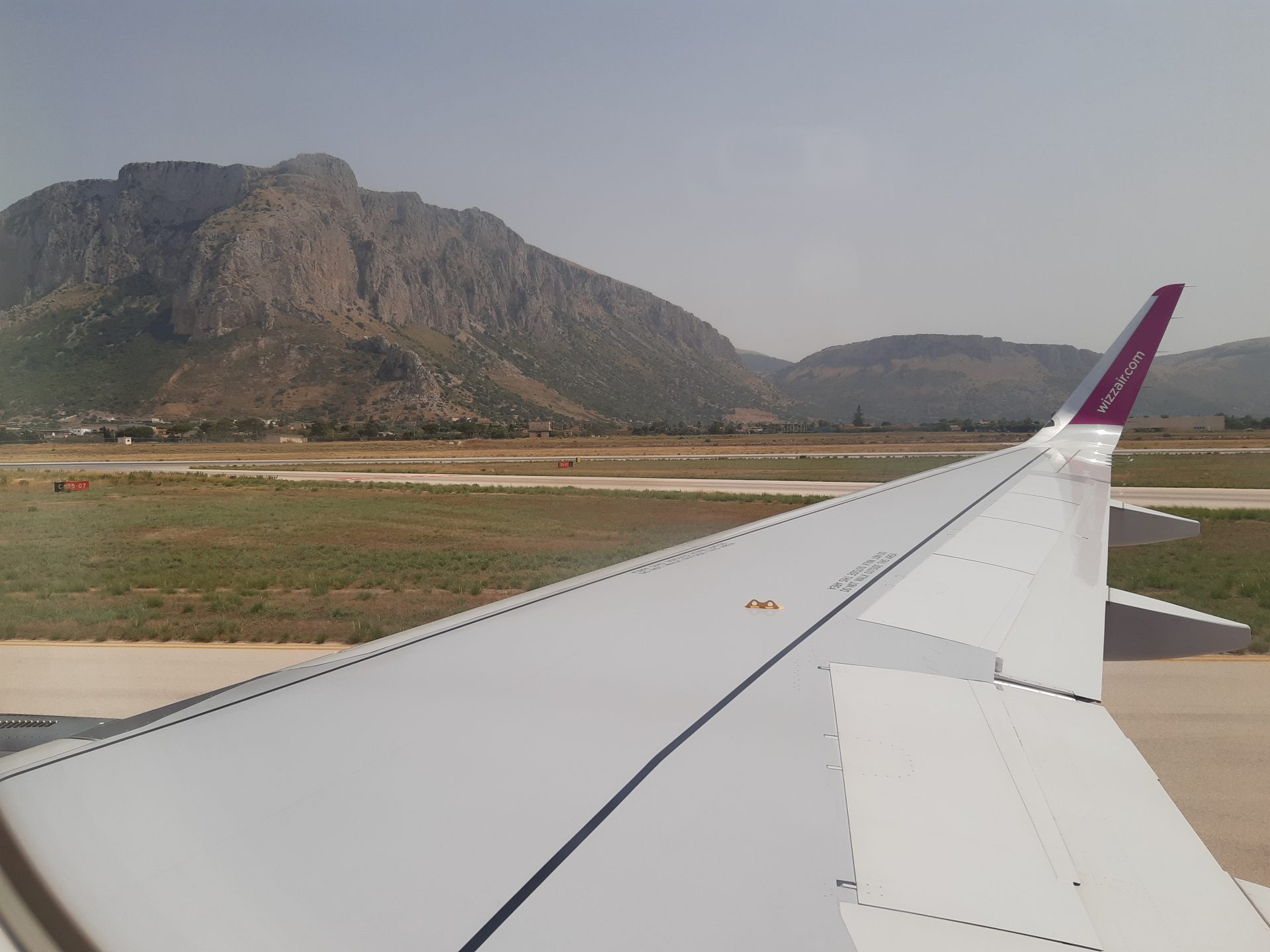 Deboarding took place in a remote position, and since I had no dispatched luggage, in no time I was out of the terminal, waiting for my bus to downtown Palermo.

The night passed like a breeze; flash forward to the following morning and I was back to the airport. Safety clearance was quite fast, albeit once again the boarding was late, although less than in the previous flight. I only got on the plane at 10h54, 11 minutes before the scheduled time. It didn’t help that boarding was made with buses.

Once again the flight would be operated by HA-LJD; I had gotten a window once again, 18F. 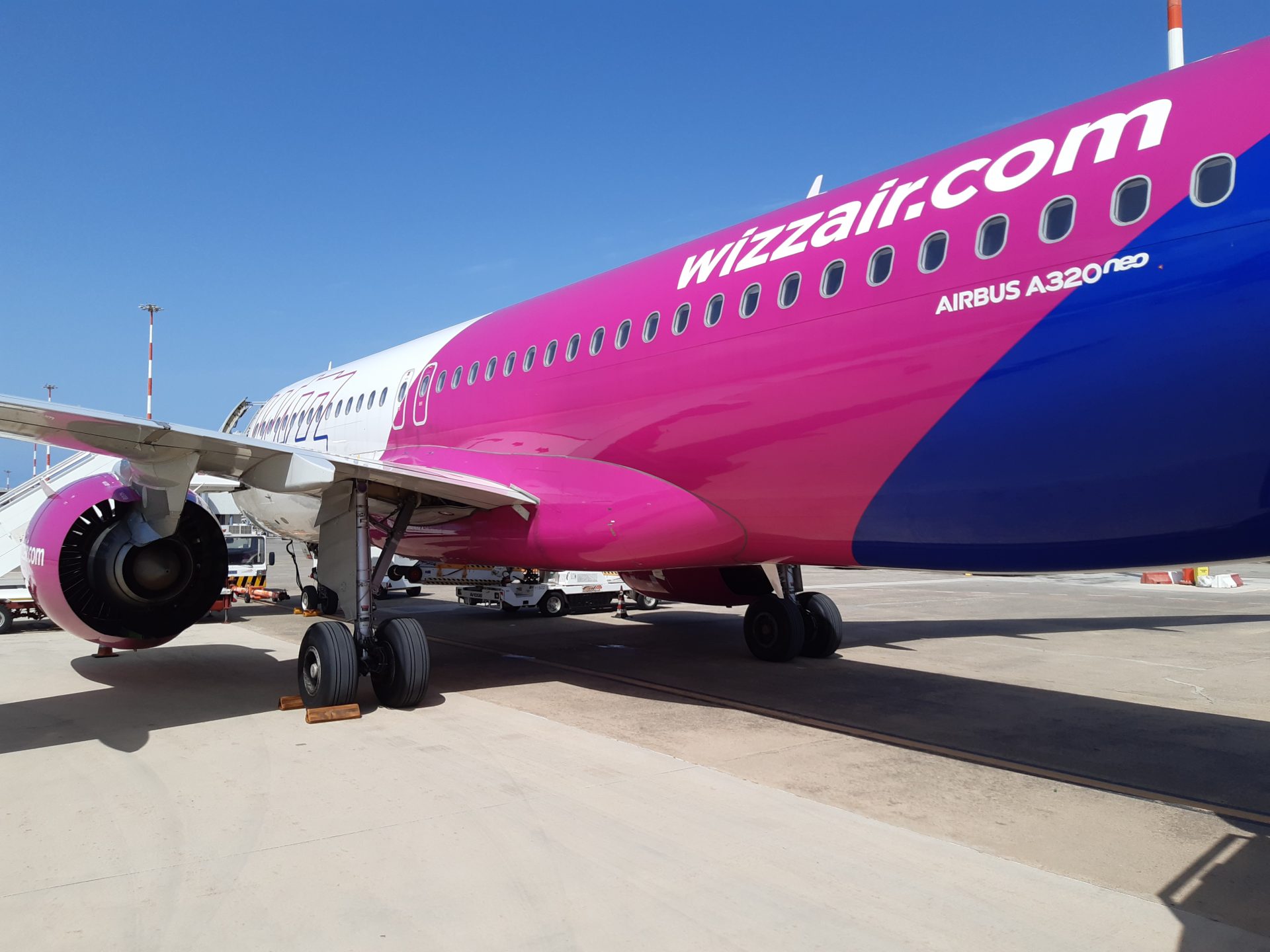 This time, though, boarding was finished on time. The plane was empty: only 76 passengers were spread over the 168 seats. The flight attendant said on the PA system that we could spread out; I took seat 2F, almost at the front. 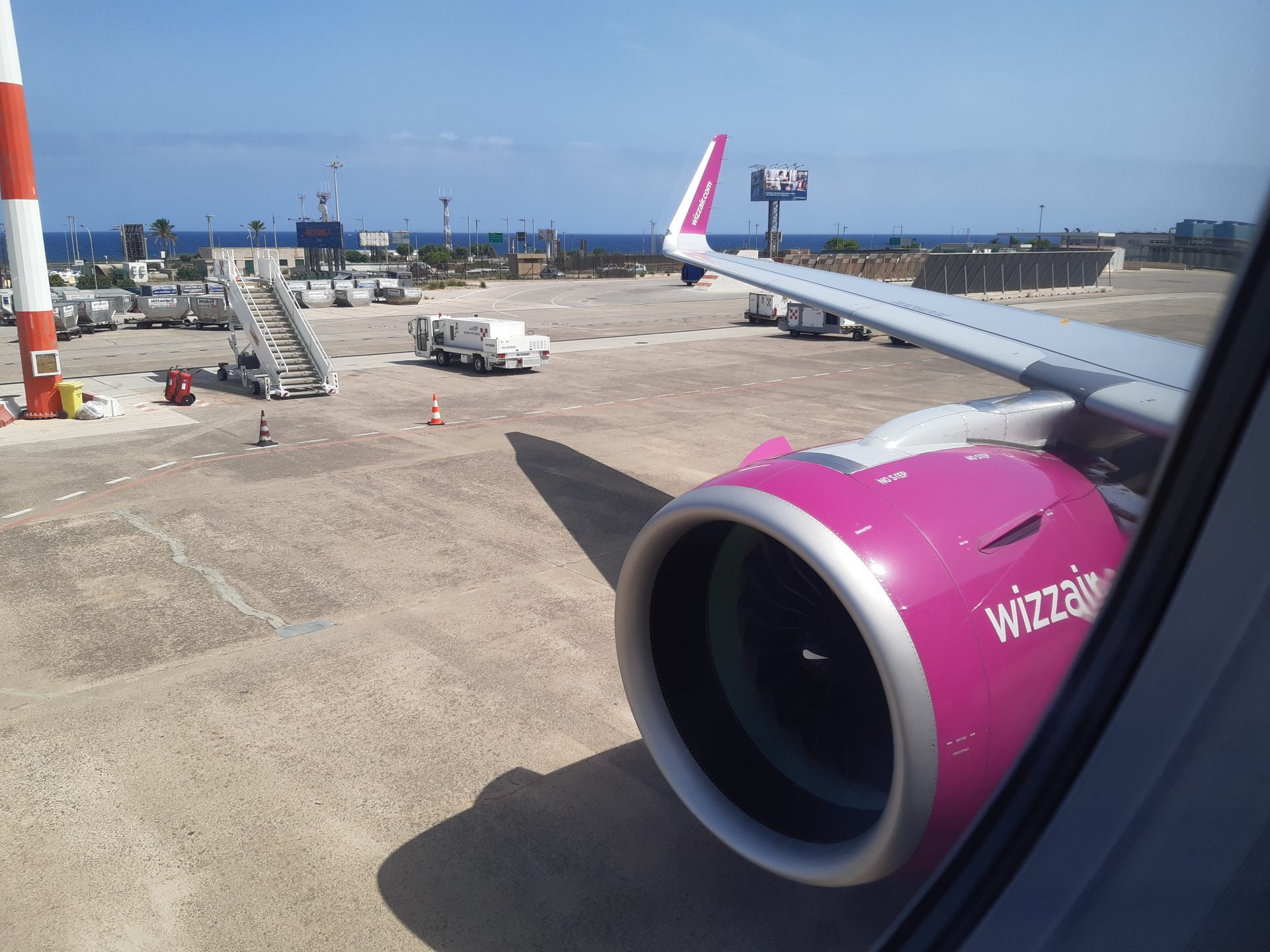 I really like Wizz Air’s cabin; it felt very modern and was not as uncomfortable as I imagined. It was very taken care of, too, as it should, since the aircraft was one year old at that time. 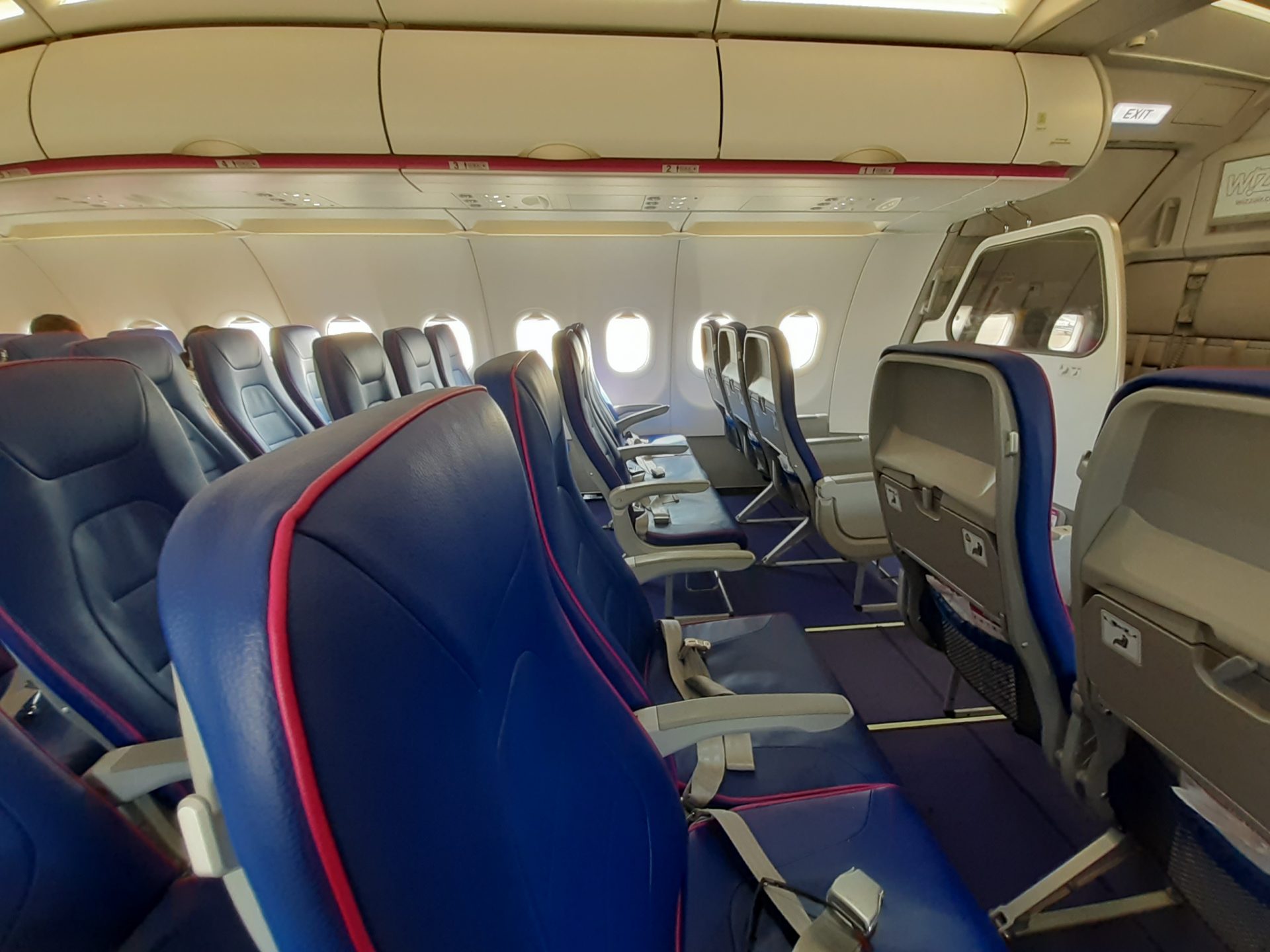 Doors were closed on-time at 10h56, nine minutes before schedule. A slow taxi to 07 runway followed, and, at 11h12, the A320neo effortlessly took off the ground.

The flight was pretty much the same as in the first leg, though the onboard service was way faster because of the very light load. Flight attendants seemed as cool as the other time.

This time, I bought a coffee and a can of Coke; the Hungarian branding at the can reminded me of how great European aviation is. This culture of exchange is what makes it so great and, most importantly, so cheap for customers.

Apart from that, I took the flight to appreciate the sights of the western Italy coast. Just before descent, Fiumicino Airport could be seen from my side of the plane, which was quite nice; we also passed near Mario de Bernardi Air Base, in Pomezia, near Roma. 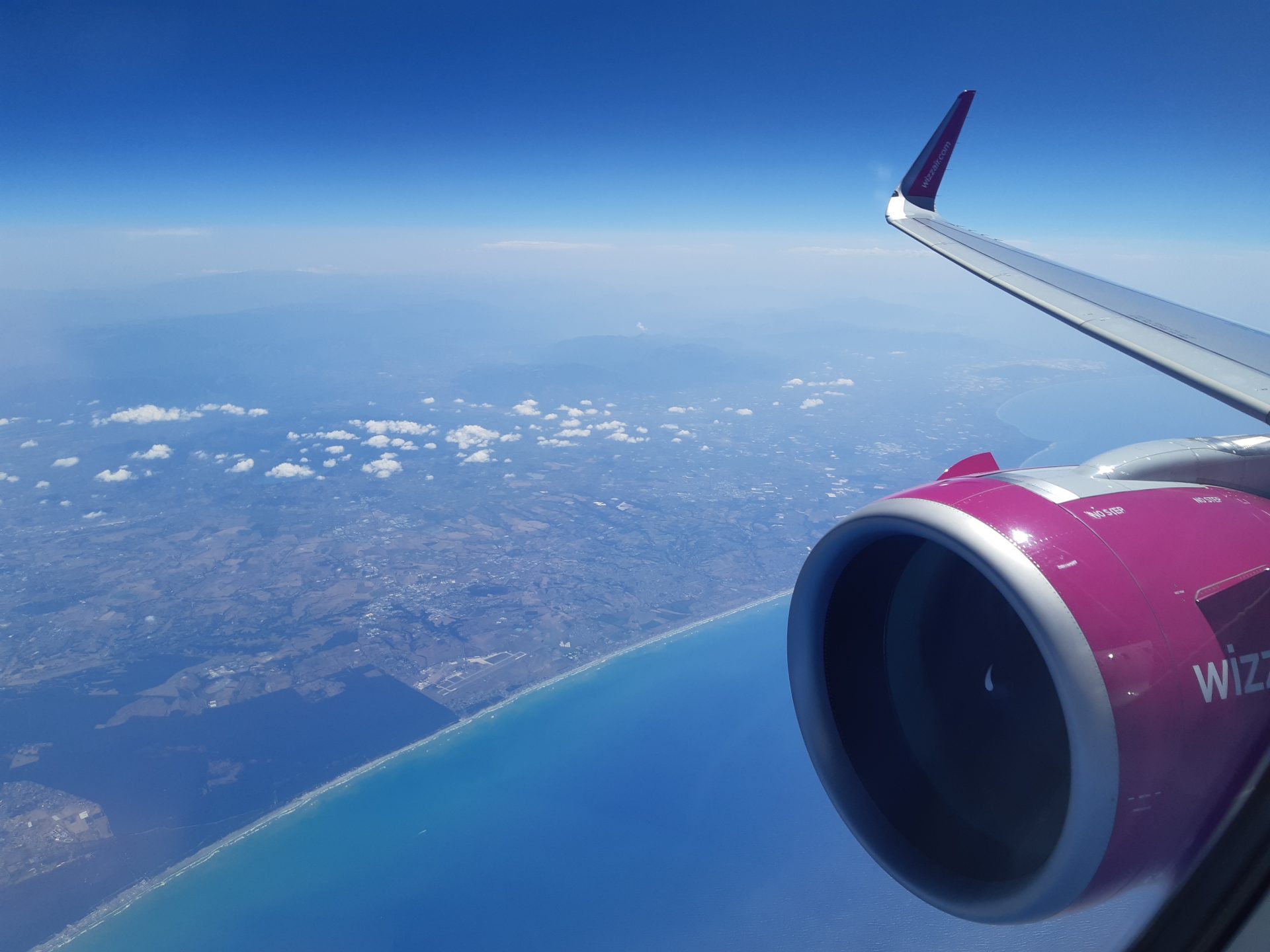 Descent into Pisa was smooth and at 12h20, five minutes before scheduled time, HA-LJD touched down in Tuscany.

Deboarding was very fast and in less than fifteen minutes I was out of the terminal, waiting for my shuttle to the train station.

My first experience with a true ultra low-cost in Europe was great. Was it perfect? By no means. But the easiness to find a cheap fare, to buy the services I needed – though I didn’t need many and it was pretty annoying to dodge them – and to get in the plane to actually enjoy my destination really got me hyped. It got me thinking about the next trip already – which you’ll read about in the next part of this report.

Overall, Wizz Air delivered a solid low-cost product and tremendously good value-for-money, which is what matters in the end. I’m sure they will be a very influential player in the Italian market in the years to come; the product is good and so is its management. ULCC competitors will by no means have an easy time countering them.