After one year of delay due to the pandemic, the 13th China International Airshow Opened Sept. 28 in the southern coastal city of Zhuhai, China. After three restricted professional days and three public days, the airshow closed on Sept. 3. Compared to the previous event in 2018, this airshow was considered to be tuned-down, and that showed with regard to both commercial deals signed and viewing experience. However, the airshow is still praiseworthy, especially on the aerobatics showcase and public engagement of the airshow.

After six days of showcasing Chinese new military aircraft and the latest aviation technologies, the air show closed with a relatively moderate scorecard. Major aircraft manufacturers Boeing, Airbus, Embraer and China’s COMAC did not report any new orders on the airshow. However, new partnerships were announced to fuel the further growth of their businesses in China.

Boeing announced its cooperation with Guangzhou Aircraft Manufacturing and Engineering Company (GAMECO) to expand Boeing 767-300BCF — short for Boeing Converted Freighter — production in China. Boeing has a finishing center in Zhoushan, China, and a number of Boeing 737-800BCF conversion lines in China. This is the first time Boeing brought 767-300BCF conversion lines to China.

COMAC, similar to Boeing and Airbus, did not report any addition of C919 orders. The manufacturer also decided not to showcase the highly anticipated jet due to the prototypes’ busy testing schedules.

Other than the major aircraft manufacturers, aviation technology providers such as Honeywell were also actively participating in the airshow.

Although the airshow did not end with satisfying commercial results, the airshow was still a success in many aspects. The public engagements improved by significant margins compared to previous events.

This airshow was equipped with a full online airshow available on everyone’s desktop. For viewers onsite, the airshow had flight simulators and virtual reality kits to help them experience the new technology.

Finally, the aerobatic showcases were highly acclaimed by viewers. The Chengdu J-20 fighter took to the sky on professional days. The fighter is the latest fourth-generation fighter in China. The Bayi Aerobatics Team also performed fascinating stunts with Chengdu J-10 fighter, the third generation fighter that has equipped the People’s Liberation Army since the late 2000s. 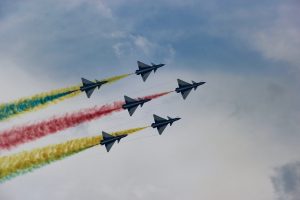 Commercial aircraft also attracted many eyeballs during the airshow. COMAC flew a COMAC Business Jets converted from the company’s regional jet ARJ21-700; Airbus cooperated with China Southern and brought an A350-900 to the airshow for static showcase on professional days; and China Southern painted a Boeing 737-800 with a special livery for Youth of Zhuhai, as a thank you to the city for hosting the airshow.

The 14th China International Airshow will take place in November 2022. The public is hoping for more aircraft, such as the Airbus A220, to come to the airshow, as those wishes were not fulfilled in 2021 due to Covid-19 restrictions. With the Beijing Winter Olympics coming up in February 2022, onlookers are looking for China to gradually ease restrictions on international travel, which would mean that the airshow could welcome more international partners come late-2022.