On January 12, 2022, ITA Airways President Alfredo Altavilla and CEO Fabio Lazzerini attended a hearing at the Transport Commission of the Italian Chamber of Deputies. During the meeting, they presented the 2021 results of the airline and the future prospects of the Italian flag carrier in 2022.

After approving the business plan in July 2021, the Italian Newco bought the Aviation branch of the former national airline to start flight operations and acquired the Alitalia brand only so that no other airline could use it. To comply with the discontinuity imposed by the European Commission, after the acquisition of the brand, it started flight operations on October 15, 2021, under the name ITA Airways. The inaugural flight AZ 1637 departed from Milan Linate and landed in Bari at 7:35 AM operated with an Airbus A320 in Alitalia livery. On the same day, there was the launch of its own “Volare” loyalty program, as ITA did not purchase Alitalia’s MilleMiglia loyalty program, because of the discontinuity required.

According to the airline’s data, the 52 aircraft in its current fleet in 2021 flew about 23,000 hours and carried 1.26 million passengers. Right now there are about 230,000 members subscribed to the new loyalty program and revenues amounted to 86 million euros, 50% less than those forecast in the business plan. This was due, according to Chairman Altavilla, above all to the pandemic, which negatively affected international routes, and to the fact that ITA Airways’ advertising campaign suffered considerable delays and consequent ticket sales suffered.

The Italian flag carrier, however, ended 2021 with more than 400 million euros in cash, a figure higher than the business plan forecast of 250 million. This came about, the president says, thanks to correct investments and sound service contracts. The airline’s punctuality in 2021 was 90% and Completion Factor 99.8%, making it one of the top airlines in the world.

The main hub will remain Leonardo Da Vinci airport in Rome Fiumicino and the second will be Milan Linate. As regards the domestic network, where the new “Superior” class is already active, unprofitable and non-strategic routes have been reduced. From Rome, there will be, in summer 2022, 17 destinations to Northern and Southern Italy, with particular attention to the preservation of routes where there is no competition from low-cost carriers. From Milan, with a similar strategy, there will be 11 domestic routes to Southern Italy.

Regarding the international network with medium-haul routes in Europe and North Africa from Rome and Milan, there will be a total of 45 point-to-point routes, with a reduction in non-profitable routes.

With regard to the intercontinental network, ITA Airways currently only operates the Rome-New York flight. From the beginning of May 2022, ITA Airways will introduce more routes to North America, Boston, Miami and Los Angeles, to South America with Buenos Aires and San Paulo and finally to Tokyo Haneda.

ITA Airways has also recently signed an agreement with Airbus for 28 new-generation aircraft to renew its fleet, including 7 Airbus A220s, 11 Airbus A320neo and 10 Airbus A330neo. The company finalized an agreement with Air Lease Corporation (ALC) for 31 aircraft, including 5 Airbus A330neo, 9 Airbus A321neo, 2 Airbus A320neo and 15 Airbus A220 for regional routes. The Italian airline has also chosen to lease 6 Airbus A350s for the long haul, to complete the modernization of the fleet and thus pursue the green objective of cutting fuel consumption and CO2 emissions by 25%. 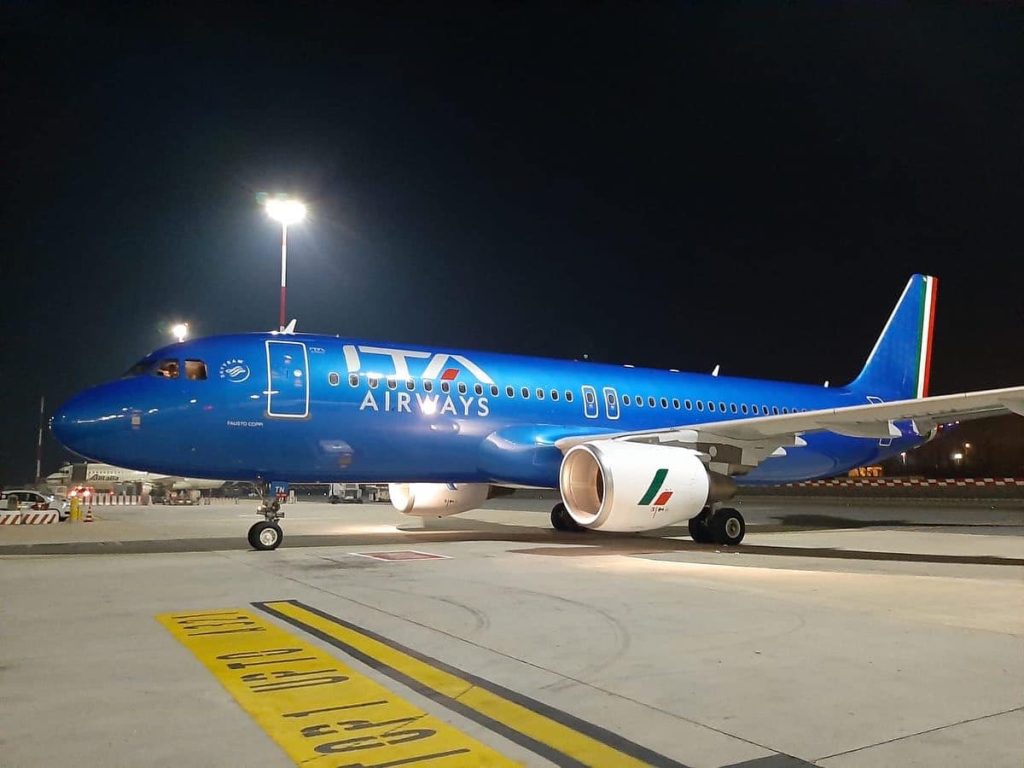 The average age of ITA Airways’ employees is under 50. This average will be further lowered by the entry of young pilots from the ITA Airways Academy, assures Altavilla. If the fleet and network growth assumptions are consistent with the economic scenario envisaged in the business plan, the airline forecasts that it will be necessary to hire around 1,000 new employees in 2022. Among these new hires will be 300 captains and first officers and over 600 flight attendants, to be followed by a large investment in their professional training.

Compared to passenger traffic, Cargo traffic is growing strongly. This counter-trend is obviously due to the pandemic, which has greatly reduced passenger flights and led to the use of many aircraft in “Preighter” configuration, i.e. aircraft whose seats have been removed to make more room inside the passenger cabin. However, this choice is short-term, as ITA Airways will base at Milan Malpensa 2 Boeing 777-200ER aircraft in wet lease available from mid-January until July 2022, with the aim of obtaining 50 million euros in revenues from “full-cargo” operations.

The Italian Transport Commission Is Not Satisfied

ITA Airways underlines President Altavilla, which is not large enough to stand alone in the market and offer extensive coverage of its network. It is necessary to integrate the airline within an alliance to guarantee growth and positive economic results in the long term. SkyTeam agreement has a duration of only one year and therefore ITA Airways can leave it by December 2022 without penalty, by giving at least 6 months’ notice.

The Chairman of ITA Airways confirmed negotiations have been carried out with both European and non-European operators and that the process of selecting an industrial partner will be completed by the first half of 2022.

Following the hearing and at the end of the PowerPoint presentation, however, there was no shortage of controversy on the part of members of parliament who expressed their dissent over certain unjustified decisions made by the Italian airline. First of all, the “loss” of territorial continuity with Sardinia. This has contributed to the loss of revenues compared to what was foreseen in the business plan, given that the connections with the Peninsula have ended up under the control of the Spanish low-cost company Volotea. Finally, what was highlighted as “offensive” was the failure to deliver the official business plan for the second consecutive time. The 2022 Business Plan is still “always presented in a very quick and confusing way by the management of ITA Airways and the slides cannot be a substitute for a real business plan documentation”. Therefore, the committee requested a third hearing to be held next Wednesday.

Vincenzo Claudio Piscopo
Vincenzo graduated in 2019 in Mechanical Engineering with an aeronautical curriculum, focusing his thesis on Human Factors in aircraft maintenance. Currently, he is pursuing his master's degree in Aerospace Engineering at the University of Palermo, Italy. He combines his journalistic activities with his work as a Safety and Reliability Engineer at DMD Solutions.