A Spirit A320 in New York (Photo: AirlineGeeks | William Derrickson)

The low-cost carrier industry is about to have some major breakthrough changes, beginning with the definitive merger between two of the largest and most prominent low-cost carriers in the U.S.; the first airline merger since Alaska purchased Virgin America back in 2016.

Under a $6.6 billion deal that was unanimously approved by both companies’ board of directors on Monday, Frontier Airlines will be acquiring and merging with fellow rival Spirit Airlines to go from competing against each other, to creating what might be the U.S.’s fifth-largest airline, as well as the largest low-cost carrier in the entire country.

Even prior to today’s deal, both low-cost carriers were already bigger than competitors such as Allegiant, and the combined airline will then go on to be larger than Alaska Airlines and even JetBlue.

This merger will give Denver-based Frontier Airlines a majority 51.5 percent stake in the new combined airlines, and Florida-based Spirit Airlines will own approximately 48.5 percent of the company, allowing for it to be able to give its investors 1.9126 shares of Frontier Airlines, with an additional $2.13 in cash for each share they own, giving Spirit shareholders an implied value of $25.83 per share – representing a premium of 19 percent.

With the branding of the new airline still unknown, the overall combined revenues are estimated to be at $5.3 billion based on the airline’s respective financial results for 2021. And considering that both low-cost carriers have highly varied route networks, this merger will allow for the new carrier to offer more than 1,000 daily flights to over 145 destinations in 19 countries across the U.S., the Caribbean and Latin America, including the likes of major cities as well as underserved communities. 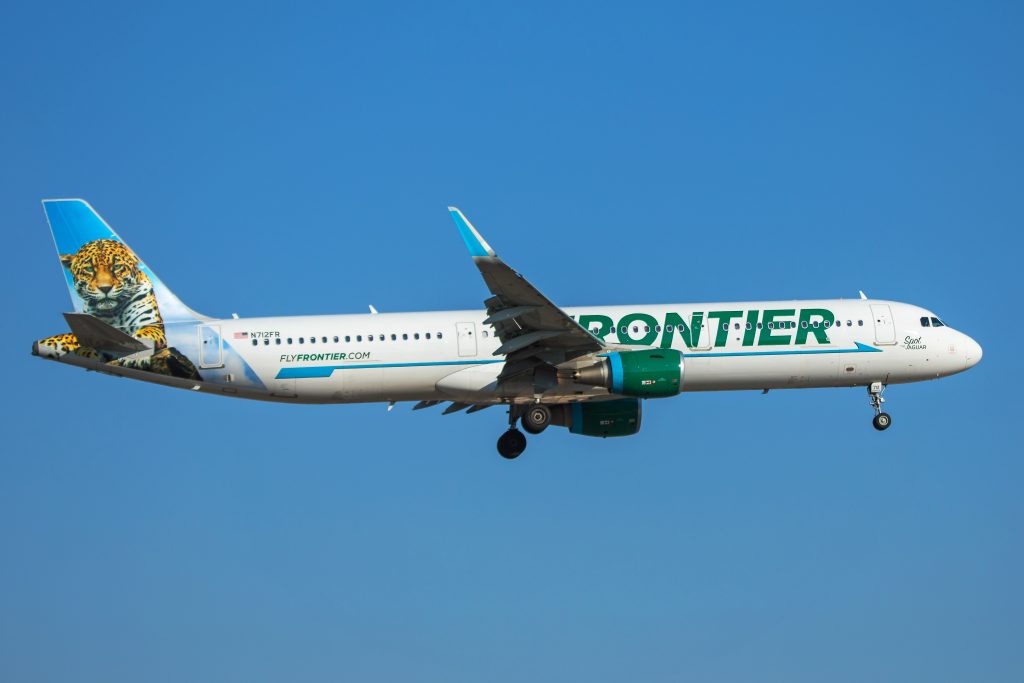 An A321 in Frontier’s “Spot the Jaguar” livery on approach into Las Vegas.
(Photo: AirlineGeeks | William Derrickson)

“We are thrilled to join forces with Frontier to further democratize air travel,” said Ted Christie, President and CEO of Spirit Airlines in a press release. “This transaction is centered around creating an aggressive ultra-low fare competitor to serve our Guests even better, expand career opportunities for our Team Members and increase competitive pressure, resulting in more consumer-friendly fares for the flying public. We look forward to uniting our talented teams to shake up the airline industry while also continuing our commitment to excellent Guest service.”

Frontier Airlines and Spirit Airlines definitely made good rivals along the years, but this merger shows that they are indeed better as merged partners – considering that both airlines operate an all-Airbus only fleet, as well as similar business models of being ultra-low-cost carriers and extremely comparable fare structures. Additionally, both airlines have overlapping hubs, as well as unique destinations such as the Spirit Airlines hub in Fort Lauderdale.

And so besides a shake-up in competition and ample new job opportunities for the aviation industry, the merger of the two airlines will also be creating many more low-cost varieties for passengers as well. The new airline will have a combined fleet of one of the youngest, and most fuel efficient aircraft across the U.S, allowing for it to deliver an estimated $1 billion in annual consumer savings and to be even more reliable in service through a variety of operational efficiencies.