Early Monday morning, U.S.-based ultra-low-cost carriers Spirit and Frontier announced their plans to merge the two airlines in a $3 billion cash-stock deal. The airline duo expects annual run-rate operating synergies once full integration is complete. While the deal is expected to close in the second half of 2022, a variety of movements are crucial to the success of this merger in its infancy.

Indeed, it has been quite a while since a full-fledged merger has taken place among a group of U.S. airlines, so here are five key points to watch in the Frontier-Spirit deal:

U.S. anti-trust laws and airline mergers have not always meshed well, and time will tell if this deal is sniffed out by the Department of Justice (DOJ).

In 2013, the U.S. sued American Airlines and US Airways as part of their merger with Attorney General Holder stating, “This transaction would result in consumers paying the price—in higher airfares, higher fees, and fewer choices…If this merger goes forward, even a small increase in the price of airline tickets, checked bags or flight change fees would result in hundreds of millions of dollars of harm to American consumers. Both airlines have stated that they can succeed on a standalone basis and consumers deserve the benefit of that continuing competitive dynamic.”

The parties eventually settled the case on terms that the airlines would divest slots and gates at key constrained airports across the country to ultra-low-cost carrier airlines (ULCCs), which included cities such as Boston, Los Angeles, New York’s LaGuardia Airport, Washington, DC and more. The key point here is the emphasis on low-cost carriers. 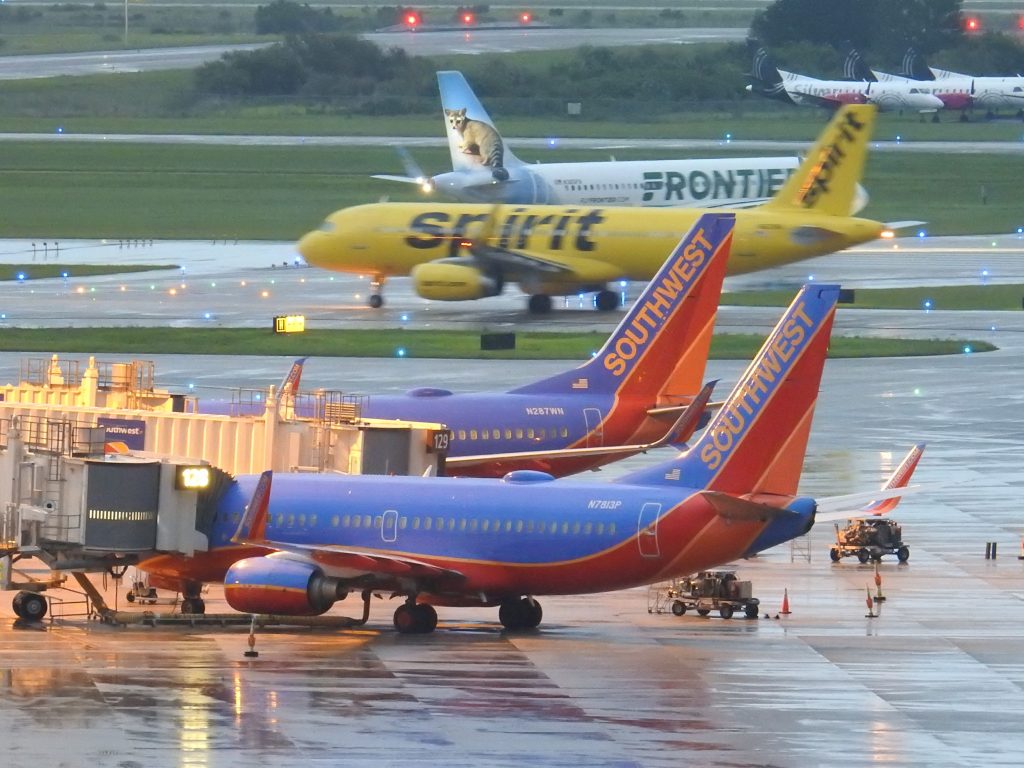 In 2016, the DOJ again sued Virgin America and Alaska Airlines over their merger, resulting in a requirement where Alaska would ‘significantly’ scale back its codeshare agreement with American.

Anti-trust divisions within the upper echelons of the DOJ have long advocated for LCCs and ULCCs. They believe that these airlines are key to sustaining a healthy competitive environment, which may prove key for Spirit and Frontier in appeasing the regulators.

It is a safe bet that these regulators are already sniffing around, and of course, the carriers have prefaced much of their merger marketing material on ‘subject to government approval.’

Most of the workgroups at Frontier and Spirit are unionized, including pilots and flight attendants. In the past, integrating these workgroups has proven to be a major hurdle, especially when factoring in things like seniority, bid schedules and contracts.

According to an Association of Flight Attendants statement regarding the recent merger news, the union said it represents over 4,600 Spirit flight attendants and 2,900 at Frontier. While both Frontier and Spirit do not plan on any job cuts as part of the merger, there’s been no mention of seniority integrations.

“Our first priority is to determine whether this merger will improve conditions for Flight Attendants just like the benefits the companies have described for shareholders and consumers. Our support of the merger will depend on this,” the statement added.

The airlines expect to add 10,000 direct jobs by 2026 with 83% of the combined workforce unionized. Airline leadership says union leaders and employees also found out about the merger early Monday morning.

While Frontier and its parent company Indigo Partners are acquiring Spirit on paper, both maintain separate brands. Among them is Frontier’s famous aircraft livery, which includes an animal on each tail.

So far, there has been no mention of branding plans as part of the merger or if a completely new brand will be created. This plan is expected to be announced by the merger’s close date.

For example, even though US Airways technically acquired American on paper in 2013, the American Airlines brand prevailed.

Even though Frontier will be the surviving entity here, it is unclear how the two airlines plan to brand blend. 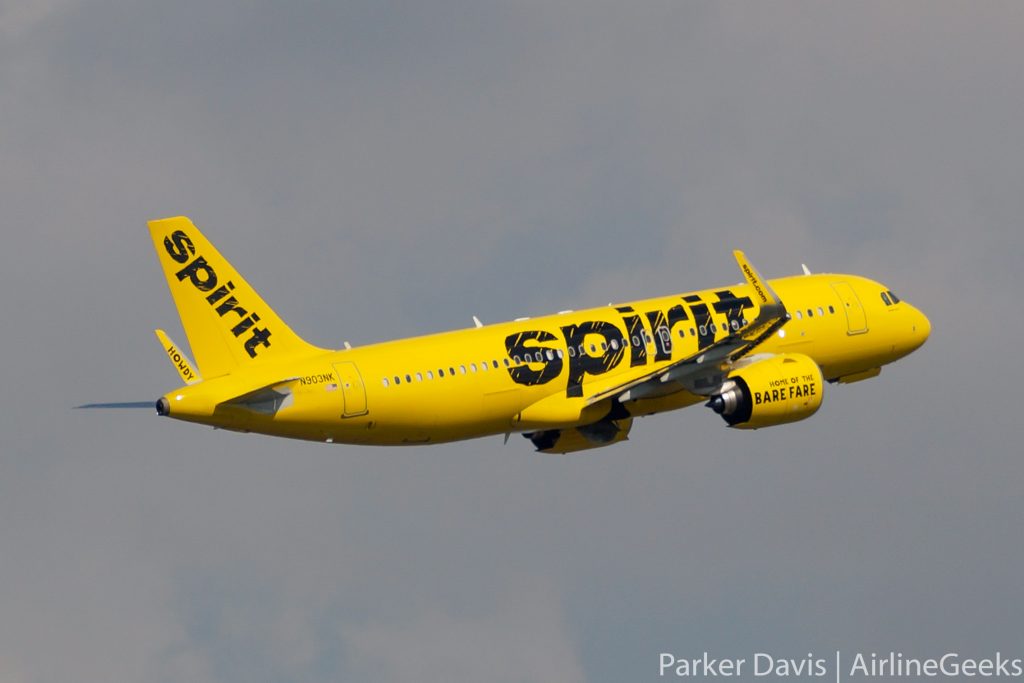 Per Cirium data, Frontier maintains a 2% market share, while Spirit controls 3% of the U.S. domestic market. Notably, the carriers overlap on about 18% of flights and operate similar schedules out of a variety of key low-cost destinations, including Orlando and Las Vegas.

The combined route networks would make it the U.S.’s fifth-largest airline — stepping on the toes of JetBlue and Alaska.
As Aerology points out, both airlines maintain similar regional market shares in several areas. Adding these two networks would result in over 1,000 daily flights opening the door for routes to smaller cities and ones previously exited, such as Washington Dulles.

Don’t think the DOJ will consider a state a market (nor would an 18% share be alarming), but combined carrier set to become second largest in Florida, jumping DL and WN (and behind only AA—with hub in MIA).

Quick look at share in the combined carrier’s top 10 airports below. pic.twitter.com/c4rQUHmstn

Leveraging each airline’s unique crew bases, hubs and focus cities will be critical from a network strategy point of view. They’ll need to refine these networks to not overshadow but instead compliment each other. Some point-to-point operations in addition to ultra-low-cost constraints and targeting markets correctly could make or break the merger.

This one is key. Airline mergers aren’t cheap and often come with a mirage of operational and administrative difficulties. The premise behind both Spirit and Frontier’s business models is keeping costs low, resulting in lower pricing for the consumer. Often, operational issues – including delays/cancellations caused by the airline – are costly. These types of issues can hinder an ultra-low-cost carrier’s growth.

In this case, it isn’t like US Airways-American where one was saving the other post-bankruptcy. These are two financially healthy airlines with business models that have stood the test of time. Diluting this health with union conflict, fleet planning, messy network strategy, etc. could certainly slow down its anticipated growth.

Now, there are a lot of factors that Spirit-Frontier has working in their favor, including all-Airbus fleets, healthy route networks, and a clear strategic business focus.

Follow Ryan
Ryan Ewing
Ryan founded AirlineGeeks.com back in February 2013 and has amassed considerable experience in the aviation sector. His work has been featured in several publications and news outlets, including CNN, WJLA, CNET, and Business Insider. During his time in the industry, he's worked in roles pertaining to airport operations and customer service while holding a B.S. in Air Transportation Management from Arizona State University along with pursuing a concurrent MBA and law program. Ryan has experience in several facets of the industry from behind the yoke of a Cessna 172 to interviewing airline industry executives. In addition to supporting AirlineGeeks, Ryan works full-time in the aviation industry.
Follow Ryan
Latest posts by Ryan Ewing (see all)
airlineairlinesFeaturedFrontierlow costOrlandospirit frontierULCCultra low costvegas
Related Stories
[ Related Stories ]January 24, 2023 4:30 pm ET
By Will Lee