Australian flag carrier Qantas today announced a set of aircraft orders aimed at expanding both its international and domestic route networks. The Australian airline committed to ordering a minimum of 52 Airbus aircraft — 12 A350s, 20 A320XLRs and 20 A220s – as it plans new non-stop flights from Australia to cities like London and New York, as well as improving domestic flight capabilities.

The major plans, named Project Sunrise and Project Winton on the international and domestic sides, respectively, will implement changes as early as 2023 for domestic flights and 2025 for its long-range, non-stop routes.

Riding Into the Sunrise

The airline’s plan, codenamed Project Sunrise, will include non-stop flights to the four corners of the globe. According to the media release, travelers from Australian airports will be able to access cities such as London, Paris, Cape Town, Rio de Janeiro and New York with direct flights to start from Sydney in 2025, although it plans to expand this service to both Brisbane and Melbourne at a later date.

As Qantas looks forward to the sunrise, it is also looking to utilize so-called sustainable fuels. The aircraft will operate with Rolls-Royce Trent XWB-97 turbofans which can operate on sustainable aviation fuels (SAFs), and offer 15% increased fuel efficiency compared to first generation Trent engines as well as reduced noise.

“New types of aircraft make new things possible,” Qantas CEO Alan Joyce said in a statement on the new fleet. That’s what makes today’s announcement so significant for the national carrier and for a country like Australia where air travel is crucial.”

He added, “Throughout our history, the aircraft we’ve flown have defined the era we’re in. The 707 introduced the jet age, the 747 democratised travel and the A380 brought a completely new level of comfort. The A350 and Project Sunrise will make any city just one flight away from Australia. It’s the last frontier and the final fix for the tyranny of distance. As you’d expect, the cabin is being specially designed for maximum comfort in all classes for long-haul flying.”

Qantas released a comprehensive rendering of its A350-1000, revealing greater space by removing excess seats – its aircraft will have to lowest seat count of any A350-1000 currently in service. This arrangement will provide 140 economy seats with a 33” seat pitch, 40 premium economy seats with a 40” seat pitch, a buffering ‘Wellbeing Zone’ between the two for comfort on the 20 hour flights, 52 business suites with a self-service bar (say goodbye to the A380 bars), and six first-class enclosed suites with separate recliner chairs and ergonomic beds — a total of 238 seats. 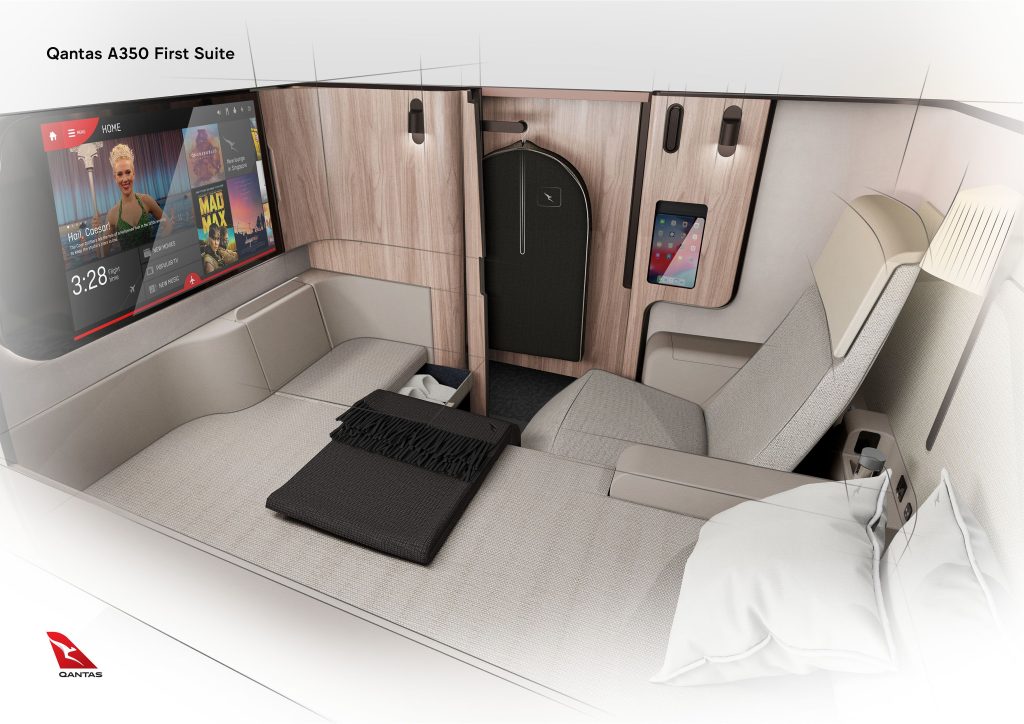 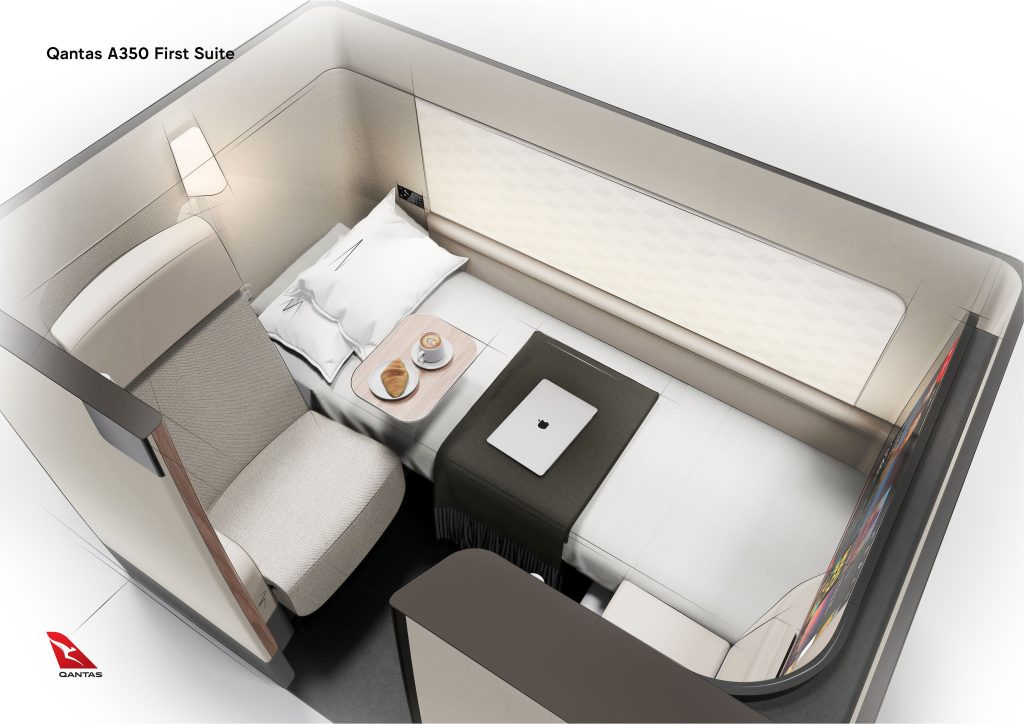 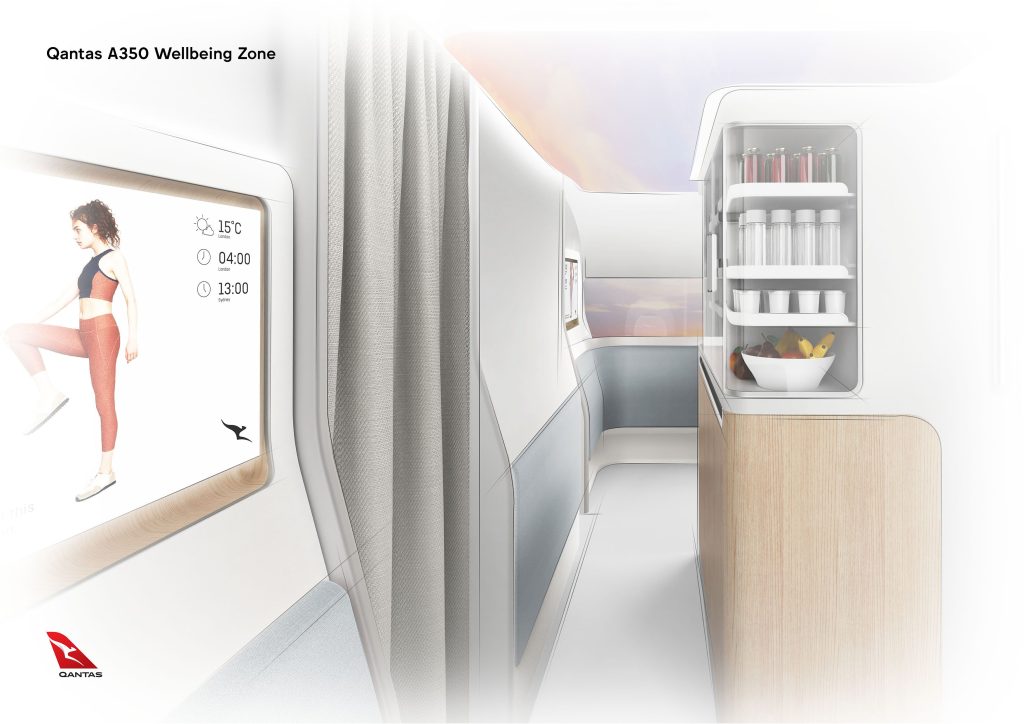 Qantas A350-1000 Wellbeing Zone, where passengers in all classes can stretch during the long flights. (Photo: Qantas) 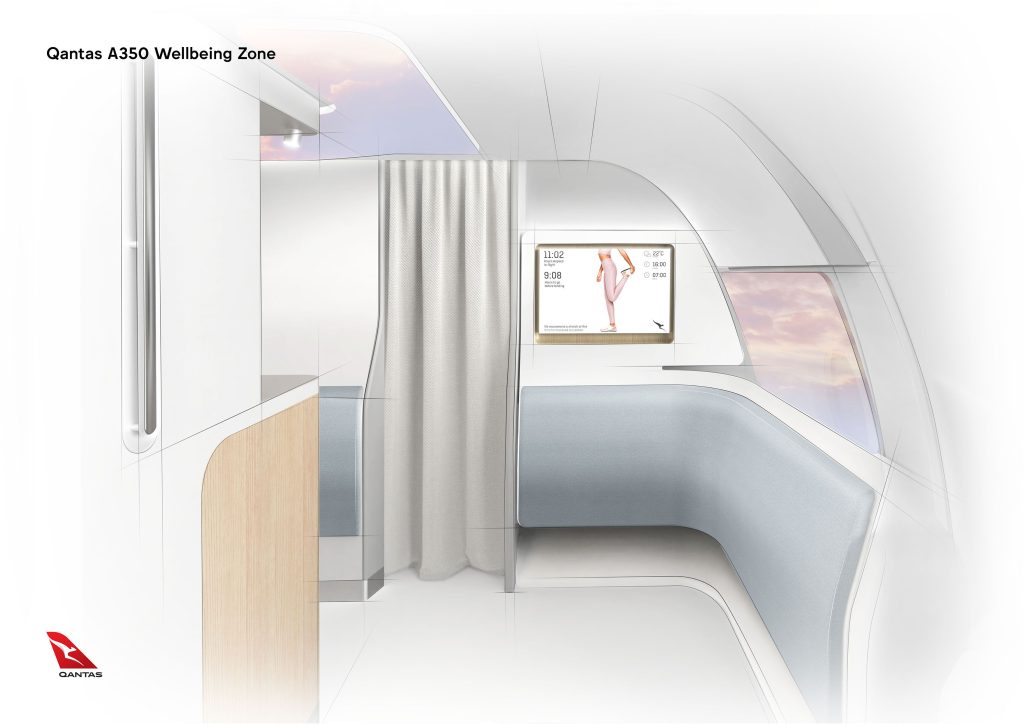 Although prices have not yet been mentioned, there is little reason to doubt that the prices will be significantly more expensive than multi-leg flights.

Qantas plans to improve its domestic capabilities with its Project Winton,  ordering 20 Airbus A321XLRs and 20 A220-300s to stagger the replacement of its retiring Boeing 737 and 717 aircraft. The initial deliveries of its new aircraft will start in late 2023, with the arrival of its first A220, and joined later by the A321XLR the following year.

The new aircraft will offer improvements in both passenger capacity and range, with Qantas saying the new A321XLR will have an additional 1,629 nautical miles and room for 200 passengers — an increase of 15% without compromising any legroom — compared to its existing Boeing 737 fleet. The A220-300 will have capacity for 137 passengers — a 25% increase — while nearly doubling the range of the Boeing 717 to over 3,200 nautical miles, meaning it will be able to travel non-stop to any city in Australia.

Both new aircraft will open further opportunities for Qantas in the Asia-Pacific market, adding to the existing order of 109 A320s from low-cost subsidiary Jetstar. All in all, it adds up to what Joyce called “the largest aircraft order in Australian aviation,” adding that it “is a clear vote of confidence in the future of the Qantas Group.”

That confidence, however, has been put to the test in recent weeks as the airline has faced backlash from unions, passengers and Australian customer advocacy group Choice. During this year’s Easter holiday period, entire Qantas flights took off without any baggage, with passengers waiting days for luggage.