Over 40 countries, including Germany, the UK and New Zealand, have asked the United Nations body that sets aviation standards to help make single-pilot flights a safe reality. The European Union Aviation Safety Agency has also been working with aircraft manufacturers to determine how solo flights would operate and preparing rules to oversee them. EASA said such services could start in 2027.

The working paper aims to push the regulator to enable extended Minimum Crew Operation (eMCO) and eventually evolve the industry into Single Pilot Operation (SiPO). The former still employs two pilots at the controls during takeoff and landing, but one pilot can rest during the cruise phase. The measure would reduce costs and relief the pilot shortage situation.

As a passenger, I would avoid flying on a plane piloted by a single captain. 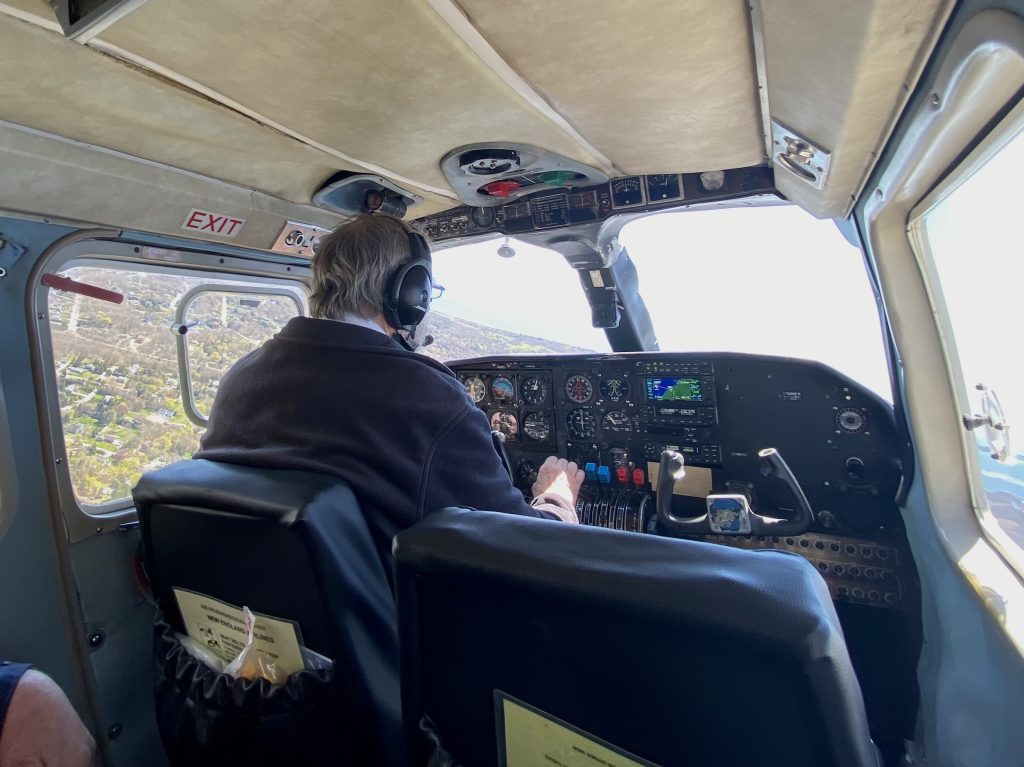 Many commuter flights are operated by a single pilot. (Photo: AirlineGeeks | Fangzhong Guo)

Single pilot operation is not new or infeasible from a technology standpoint. Even in the commercial realm, most commuter flights that carry nine passengers or less in the United States only require a single pilot. However, the most recent plane mainly focuses on large airplanes. Most likely including airplanes from Boeing 737, Airbus A320 and larger widebody aircraft.

Civilian and military users are exploring the possibilities of operating longer flights with a single pilot. For instance, FedEx and Sikorsky tested single-pilot operations on an ATR 42. More recently, The US Air Force also flew an extended single-pilot mission with KC46, a tanker based on Boeing 767. However, both technologies are still in the trial phase without a clear timeline for mass application.

While the technology is mature for flying and even landing the aircraft in nominal conditions, pilots and passengers worry single pilot will reduce the safety margin in emergencies.

Technology advancement such as Engine Indication and Crew Alerting System(EICAS) has proven helpful for reducing workload during malfunctions for the crew. However, even a well-trained professional can feel overwhelmed and make a mistake when many alarms are sounding. It has been challenging to avoid when two pilots are in the cockpit, and it’ll be even more inevitable when there’s only one in control.

The proposed eMCO would still have two pilots onboard, so the second pilot could jump in and help in an emergency. However, it will not be as efficient as having two active pilots in the cockpit.

Even though incidents rarely occur during the cruise, disasters like AF447 could still happen. FAA study has shown that if a pilot is woken up after only one or two hours of rest, sleep inertia can cause a noticeable change in pilot response time. It’s hard to justify a second pilot could react effectively in that situation.

Companies are also developing technologies to pilot planes remotely, which could come to the rescue in this situation. However, I can hardly imagine the remote pilots having the complete information to apply situational awareness. The informational disparity could also render help from remote control less helpful.

Unfortunately, tragedies such as Germanwings flight 9525 exist. Hundreds of people have passed in deliberate crashes caused by mental health issues. It also prompted the European regulator to impose a minimum two-person rule in the cockpit for a brief period. As a passenger, I don’t think I’ll ever feel safe knowing a single-point failure could take many lives away in a moment.

Although I don’t support eMCO or SiPO in passenger airplanes, I believe they will be more practical for cargo applications. In the meantime, I think autonomous flying technologies will eventually replace the need for pilots in the cockpit. Systems such as Garmin AUTONOMÍ™ already exist that can land airplanes in case of emergency. With the proper ground equipment, larger planes can land themselves under challenging conditions, such as low visibility. Technology will slowly mature to cover all phases of operation and scenarios.

There are several concepts for operating un-piloted flights. For instance, Wisk and Boeing are working on an operational concept for a ground-based operator to simultaneously monitor several self-flying air taxis. On the other hand, Reliable Robotics is working on an unmanned demonstrator that involves more remote piloting. In either case, operators at command will make decisions based on the same information. In the case of a bad actor, there may be a better chance of taking them down before disaster strikes. Therefore, I would fly on a plane without a pilot before on one with a single pilot.

Moving toward less human involvement in commercial transport is the right direction. It’ll reduce operating costs and carbon emissions, and eventually, it’ll provide the same level of safety, if not better.

However, the technology appears to be a little far from ready. Aviation still needs reliable coverage over the vast area above the ocean. Data links still require a significant increase in bandwidth to support reliable uncrewed operations. Lastly, the ever-evolving cyber-security risk means most airplane systems are still individual players disconnected from the brain.

We won’t be stepping on an uncrewed flight soon, but I’m hopeful that day is not too far away.

Over 40 countries, including Germany, the UK and New Zealand, have asked the United Nations body that sets aviation standards to help make single-pilot flights a safe reality. The European Union Aviation Safety Agency has also been working with aircraft manufacturers to determine how solo flights would operate and preparing…

Ultra-low-cost, transatlantic, narrowbody air travel is a concept we’ve seen this one before, haven’t we? There were the days of…