Checking Out the Rebranded Southwest

With the AirTran integration complete, Southwest has turned its attention to the rebranding of its fleet as the wordless “canyon blue” Boeing 737s will fade into the new “billboard” Southwest paint job. While some of the aircraft in Southwest’s fleet have already seen the new livery, most are still in the old red and blue colors. Southwest is also tasked with their dated Boeing 737-300 and 737-500s, which still make up about 20% of the carrier’s fleet. Recently, I got to experience the new Southwest Airlines with a trip to Orlando, Florida.

I arrived at Lambert-St. Louis International Airport about an hour and a half prior to my 9:50 p.m. departure. Southwest’s ticket counters in the East Terminal at STL has received the new facelift, with the old heart symbol being replaced with the new tail design and billboard titles. The line was short due to there only being two more flights out of St. Louis that evening, my flight to Orlando and another flight to Tampa. Checking in and getting through security was fast and within 15 minutes I was airside.

One slip up did occur before my flight, however. About twenty minutes prior to boarding, Southwest came over the intercom and asked for me to report to gate E18 (my departure gate). The gate agent said that there was a mix up and someone accidently deleted me from the flight, so the airline had to reprint my boarding pass. I was shuffled down to spot C34, but the gate agents said I could board before the C boarding group because of the mix up.

At approximately 9:10 p.m., our flight pulled in from Ft. Lauderdale: it was a recently repainted Southwest Airlines 737-700. The plane was an ex-AirTran plane (N7707C), which had switched to Southwest’s service in August 28, 2014. Boarding started at about 9:25 p.m. and was completed in a timely manner. Since I boarded so much later in the flight, I was relegated to sit in seat 21E for the two-hour flight to Orlando. The gentlemen who occupied the window was nice enough though to allow me to shoot pictures out of the window.

We pushed three minutes early at 9:47 p.m. and after a quick taxi we departed on runway 12L. The flight was overall what you would expect from a Southwest flight. Fifteen minutes after takeoff the flight attendants came through the cabin asking for drink orders. Snacks on the flight consisted of Nabisco Ritz Snack Mix and the carrier’s ever popular honey roasted peanuts. I was surprised to find Southwest had also redesigned the napkins, which has removed the airline’s destinations on a US map and replaced it with a saying: “I’d Love to Hold Your Drink.” The overall cabin experience was still fairly comfortable. 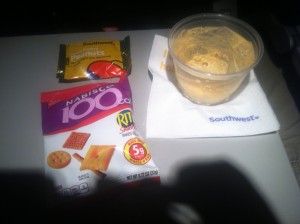 The pilots announced that due to some generous winds, we would arrive 15-20 minutes earlier than anticipated. We started our approach as Ocala and Gainesville came into view and wheels touched down at 12:36 a.m. Deplaning was long due to everyone wanting to bring on overhead bags, but by 1 a.m. I had made it to my hotel.

After a quick four-day stay in Orlando, it was time to fly back to Missouri. I arrived at the airport four hours early for my 7:40 p.m. flight. After a half hour of planespotting, I attempted to get through security. Security lines were long for concourse A due to the influx in European travelers leaving the U.S. 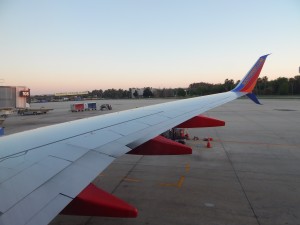 After passing through security and another hour of eating Sbarro pizza and planespotting, I decided to make my way down to gate 109 just as my plane was pulling in. The plane was a Boeing 737-800 (N8646B) delivered in August 2014 to Southwest. Boarding started a little earlier than what was expected. The aircraft boarded slower than anticipated as I quickly found my way to seat 22F and watched as others struggled to get their bags into the overhead bins. The 737, being so new, had the new Boeing Sky Interior with drop down bins, but due to the large quantity of carry on bags, the flight would be delayed while some carry-ons were gate checked. Seating on the 737-800s can be uncomfortable for some flyers, the slimline seats are narrower and the -800’s rows are 2 inches closer together, leaving you with less hip and leg room. This makes it very uncomfortable for those who take the window or middle seat.

The flight pushed at 7:50 p.m. as the crew switched the St. Patrick’s Day themed green lighting to white in order to begin the safety demonstration. We taxied to 35L behind a Delta A320 and British Airways 777, which would ultimately delay us another 5 minutes. With the crew sitting down following safety instructions, we departed and immediately turned out towards Tampa to follow the Florida coast toward St. Louis. The flight was again another routine Southwest flight. Snack options on the flight home were the Ritz Mix again. Drink delivery was disrupted over Atlanta due to a small amount of storms in the Atlanta region. 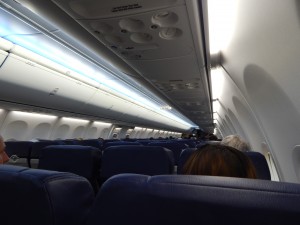 The pilots said that even though they made up five minutes in the air, we would still arrive in St. Louis ten minutes late due to our delays in Orlando. We started our decent over Cape Girardeau, Missouri as St. Louis started to become more predominant out the window. We descended and downwinded over St. Louis and landed on runway 12R. Taxing to the gate was fast as the flight attendant laid out the rules for those deplaning and those continuing on to Omaha. The deplaning was fast and I quickly made my way through baggage and to the parking lot.

The overall core of Southwest’s inflight experience hasn’t changed, even with the merger of AirTran and the rebranding, which ultimately is what makes Southwest individual. My only real complaints about Southwest are the ones I have had for years now, which is that I do not like the boarding process. My only other gripe is cost, since Southwest markets themselves as a “low cost carrier,” but have St. Louis to Orlando flight being priced at $477 one way in mid-afternoon. But besides the boarding process and cost of select flights, the inflight experience is the same quality you have received the last dozen years, and I can only assume that it will remain the same for years to come. The exterior of the plane and the seats might be different, but in the end, the crew continue to make Southwest the airline with a heart.