A Laymans Guide to En Route Weather During Thunderstorm Season

Foreword to ATCs and Aircrews:  This article is meant for the flying public who may not know what goes on behind the scenes.  The explanations are a quick and remedial way of showing what we do.

Today marked the beginning of thunderstorm season in earnest for air traffic control on a national scale.  Wide-spread thunderstorms developed into severe thunderstorms over Oklahoma and Arkansas and are moving East-Northeast still as I write. 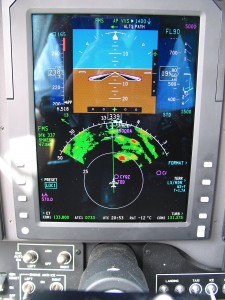 Here’s what your pilot might be looking at to determine their course of action.
“Wx Radar” By Shawn from Airdrie, Canada CC BY-SA 2.0

A full developed thunderstorm can reach up to 50,000+ in height.  Even for the very few aircraft capable of flying at 51,000, trying to fly over a thunderstorm is strongly advised against; mainly because an updraft can cause a loss of control or send an aircraft above it’s certified operating ceiling.  Any pilot concerned about preservation of life, (namely their own), will elect to “deviate” around a thunderstorm.  Usually by a wide margin.

Pilots use onboard radar, and by looking out of their cockpit window, in conjunction with instructions and advisories from ATC to navigate safely around a thunderstorm to return to their flight plan.  You might be thinking, why don’t pilots just use their onboard radar all the time?  Why do they need ATC?

Onboard radar systems have limitations.  An aircraft radar can usually only see part of what’s actually out there.  Onboard radars can see bout 90-160 degrees left and right but, only a few degrees up and a few degrees down.  This radar can be toggled vertically up and down to help the pilot get a 3D “idea” of a thunderstorm but it still does not depict everything. Aircraft weather radar can only see what’s directly in front of it.  A pilot may only see a small band of weather that is obscuring a massive system behind it.  The real issue for most pilots is range.  Onboard radar works well out to a range of 80-100 miles, but beyond that is where ATC can help complete the picture.

En Route ATC radar has what’s called an NEXRAD composite radar.  What’s displayed on a controller’s scope is a composite of multiple weather radars in the area.  We can usually see a storm from every angle and relay to the pilots the bigger line of thunderstorms behind the small system in front of it.  We also have limited altitude discerning capability as well.  Depending on the configuration of the sector, the NEXRAD weather can be filtered to show precipitation between the surface to 24,000’, 24,000 to 33,000, 33,000 to 60,000, and surface to 60,000.  You might be wondering what good does that do?  This can help us determine the height of a particular storm system and how fast it might be building.

Those of us that live near larger bodies of water know that these are breeding grounds for storms in the summertime.  Lake Michigan is no different.  As a controller that frequently works eastbound departures off of the Chicago Metropolitan area, I’m used to seeing thunderstorms build seemingly out of nowhere.  These will first start off as a small blue blurb on my scope.

NEXRAD is not without it’s limitations as well.  Center weather NEXRAD only displays precipitation of a moderate degree or greater.  Those degrees are described to the pilot as Moderate, Heavy, or Extreme.  We cannot see light rain, hail, snow, lightning, etc.  The only thing we know is that there’s precipitation out there.

The other limitation that we have is that we, obviously, cannot see how big the storm actually is.  This is where ATC relies on pilot reports to tell help us get a bigger picture of where a storm is moving and/or developing.  Many times aircraft will deviate 20, 30, 40, (I’ve seen as much as 60) miles in front of an area of precipitation.  There are a few reasons for this.  One reason might be they are looking at the overhang of a thunderstorm, which can extend many miles ahead of storm.  Another reason might be that the storm is moving so rapidly across the ground that our NEXRAD feed has not caught up to where the storm is.

We’ve given you the quick rundown of how pilots and ATC work together to complete a “big picture” of weather as it’s impacting the skies above.  Now let’s answer a few common questions travelers have about the thunderstorm season. 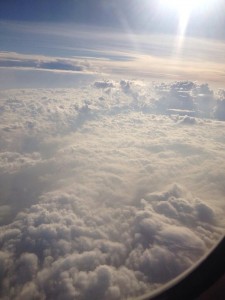 Q:  It’s sunny at O’hare, and I’m going to New York, the weather is fine there as well!  Why is my flight delayed over an hour?

A.:  I see this question asked repeatedly after storms have passed through the Chicagoland area.  More often than not, the weather did not magically disappear.  It is still moving eastward, being fed by the waters of Lake Michigan as well.  Sometimes there’s enough room to let departures go at a normal rate.  On a clear day throughout the region, we use every stream available with 5-7 miles separation one in front of the other.

During periods of inclement weather, there’s just enough room for only one line of aircraft departing instead of the normal three to five lines that depart in each of the cardinal directions of the compass.  When the storms are sort of blocking the way, we place departure restrictions on the airports.  During more severe storms, we might ask for only one line of aircraft with 20 miles between each departure.  As you can imagine, this cuts capacity drastically.  The controller’s workload dealing with aircraft that need to navigate around the thunderstorms is so much that reducing the departure rate of aircraft is necessary not only for the controller’s workload but, to help ensure that the controller does not aircraft come too close to each other while they are deviating around a storm.  A common scenario is that there are multiple storm cells in the area, with a 5-15 mile gap between them that aircraft want to go through.  If we were to run normal operations while this was happening, we could have more aircraft heading for the same area than we want to.  Of course, we can mitigate this by keeping everyone at different altitudes, but there comes a point where a controller runs out of altitudes to use.  Remember, there’s usually turbulence associated with these storms that can make an altitude virtually unusable for ATC.

As the thunderstorms move further away, we can usually increase the rate of departures a bit more.  There’s more room to pre-plan routes of flight that will keep aircraft away from the thunderstorms and safely to their destinations without overloading any particular controller.

Q: Why are we going so far to the east on my flight to the south/north?

A:  This happens when thunderstorms are traversing Central Illinois and Indiana.  The departure routes to the south/north can be, for the most part, completely blocked out.  When this happens, other areas can help pick up the slack by letting aircraft fly further to east or west to clear the adverse weather, then continue towards their destination. We call these SWAP (Severe Weather Avoidance Plan) routes. Doing this places more aircraft in these controllers airspace than they would normally have.  Restrictions are commonly placed SWAP route aircraft as to not overwhelm sectors and other centers that will be receiving these aircraft that would not normally see.  If you find yourself on one of these flights, be thankful you were even allowed to depart instead of having to wait it out at the airport.

So there you have it.  A Layman’s Guide to En Route ATC During Thunderstorm Season.  I’ve tried to keep this as easy to read as a possibly  can.  If you have any questions about ATC procedures mentioned above or not mentioned, feel free to contact me through the contact page.

Thanks to Ken Hoke of Aerosavvy.com for contributing to this article.