TRIP REPORT: Icelandair Back to the United States

Over the course of our trip, we had traveled to eight countries and flown on many airlines ranging from low-cost carriers to business class with Etihad. Yet with all of this travel, I couldn’t help but have Icelandair be near the top of my list for excitement to travel on. This flight would have us in the economy section, but would still offer many features and a relatively short flight to transport us back to Washington D.C. For those that aren’t familiar, Icelandair has a reputation for providing low-cost flights not just to Iceland, but from the United States to Europe with a quick stopover. It operates an all Boeing 757 aircraft fleet at its home at Keflavik International Airport, just 30 miles southwest of Iceland’s capital city of Reykjavik.

With the capital city being quite far from the airport and not having a rental car, we opted to take the Flybus. For a relatively low cost, the bus picks up tourists and locals alike at various points around the city, makes a quick stop at the bus terminal, and then begins the 45 minute trip to the airport. Each bus is similar to any coach bus you have most likely seen in the United States, but also offers free Wi-Fi which comes in very handy for tourists like us who didn’t purchase a data plan for this part of the trip. The bus picked us up promptly three and a half hours before our flight time, as I wanted to make sure with international customs we would still make it through to the flight on time.

After a quick stop at the bus terminal, we were on our way to Kefkavik International. Once arriving at the airport, we walked over to the self-baggage drop off station. Nearly everyone else in our bus chose to wait in the long line to talk to a representative, but we figured it couldn’t hurt to try the new system. Each of us used the computer and typed in our reservation code and our number of bags, and then proceeded to put the bag on the scale to be weighed. Once the computer saw that our bags were the appropriate weight, it printed out a baggage sticker to put on it. We proceeded to do so and followed the directions on the screen, then watched as our bags went away and down the baggage lane. The whole process took less than ten minutes for the two of us, and I couldn’t have been more pleased as to how much time we saved for not having to wait in line. 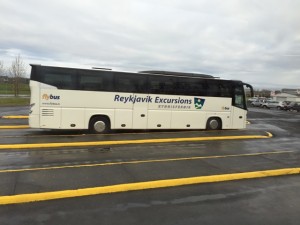 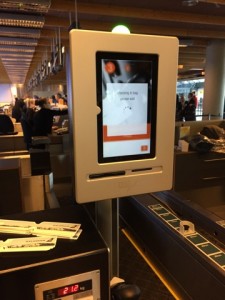 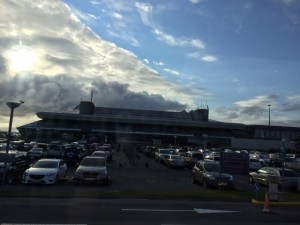 Once the bags were checked, we proceeded to the security check. Security was a breeze, and all of the officers were more than friendly. With still having over two hours till our flight, we opted for a quick breakfast at the airport. The airport operates what seems to be a food court, but actually serves a lot of great dishes in the main area. I opted for a breakfast sandwich and a water and was able to relax in a nice lounge chair inside the terminal. After breakfast we walked down to our gate, we began wondering when we would actually go through customs as it was a US-bound flight. Turns out that in order to get to the gates for US-bound flights, there is a small customs gate toward the end of the terminal where fliers then proceed to go down the escalator to get to the gate.

With being unsure as to what options the terminal had for food and entertainment once past the customs gate, we opted to hang out in near the food court and did some plane watching around that area. With about an hour to go until flight time, we proceeded to the customs gate and then down the escalator to our flights. Once we arrived at the gate area, we were told that the flight would be boarding slightly behind schedule as one of the flight attendants left her passport at home and had to go get it. Sure enough the flight attendant arrived a few minutes later, and boarding began about twenty minutes before the scheduled flight time. 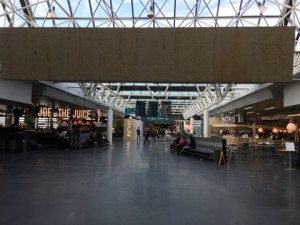 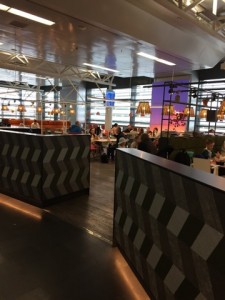 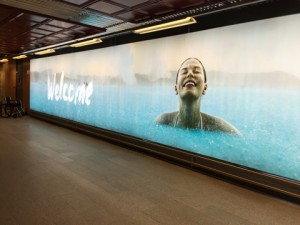 Icelandair’s 757 operates with a 2-2 formation for its Saga Business Class, followed by a 3-3 formation for economy. One important thing to note about this airline is that food is not provided whatsoever to economy passengers, but soft drinks and water are. This is very important to remember as a seven-hour flight requires some kind of food to make it through. I was given a middle seat with my companion opting for the window seat, but with having a TV, I was plenty occupied even without a window. At each seat waiting for us was a blanket and a small pillow. 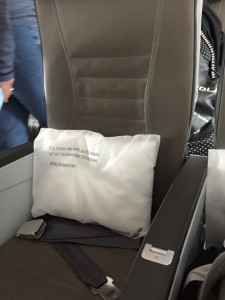 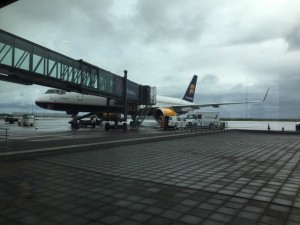 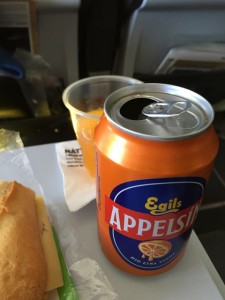 A few minutes past our scheduled take off time, we were airborne. The seats themselves were actually pretty comfortable, with decent pitch and plenty of width for an economy seat. Once we reached our cruising altitude, I was able to use the in-flight entertainment system. While the screen is on the small side, it serves its purpose and had a decent selection of films and TV shows. Like most new entertainment systems, this was touch-screen capable and also offered map capabilities to see our progress along the flight.

About an hour into the trip, flight attendants began coming around and providing drinks as well as snacks for sale. All of the snacks were reasonably priced, and I opted for Appelsin soda, which is the Icelandic version of orange soda. I was able to watch a few episodes of Family Guy while eating my snack, then proceeded to watch American Sniper. After the film I was able to nap for a little bit, as well as read some more of the book I brought along.

Before I knew it, we were only ten minutes from Washington Dulles International. With our Global Entry card in hand, we exited the plane, boarded the mobile lounge vehicle, and were on our way to customs. Washington Dulles is unique in that it does not have an easy way for international passengers to arrive at customs. Therefore, each passenger is required to deboard the aircraft and hop on a mobile lounge. While some compare it to an old Star Wars vehicle, its basically a group of seats and standing room to move passengers across the tarmac. After a ten minute ride, we were in customs and through the global entry line in no time. 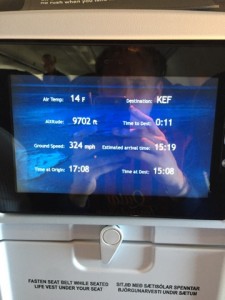 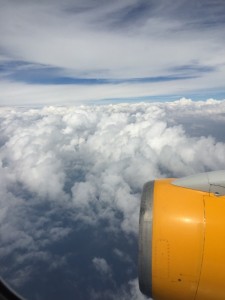 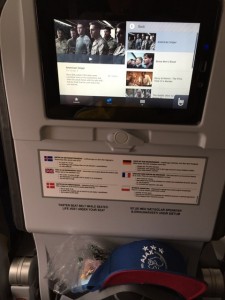 For those that are looking to travel to or from Europe and the United States, with a quick stopover in Iceland, it is difficult to compete with an offer such as this. Great service, followed by decent seats and a solid entertainment system indicate I wouldn’t hesitate to fly Icelandair again. In addition, I think they will continue to drive down transatlantic fares as legacy carriers attempt to compete with unique offerings such as this.

Editor’s Note: To see Joe’s full trip throughout the Middle East and Europe, use this interactive map. 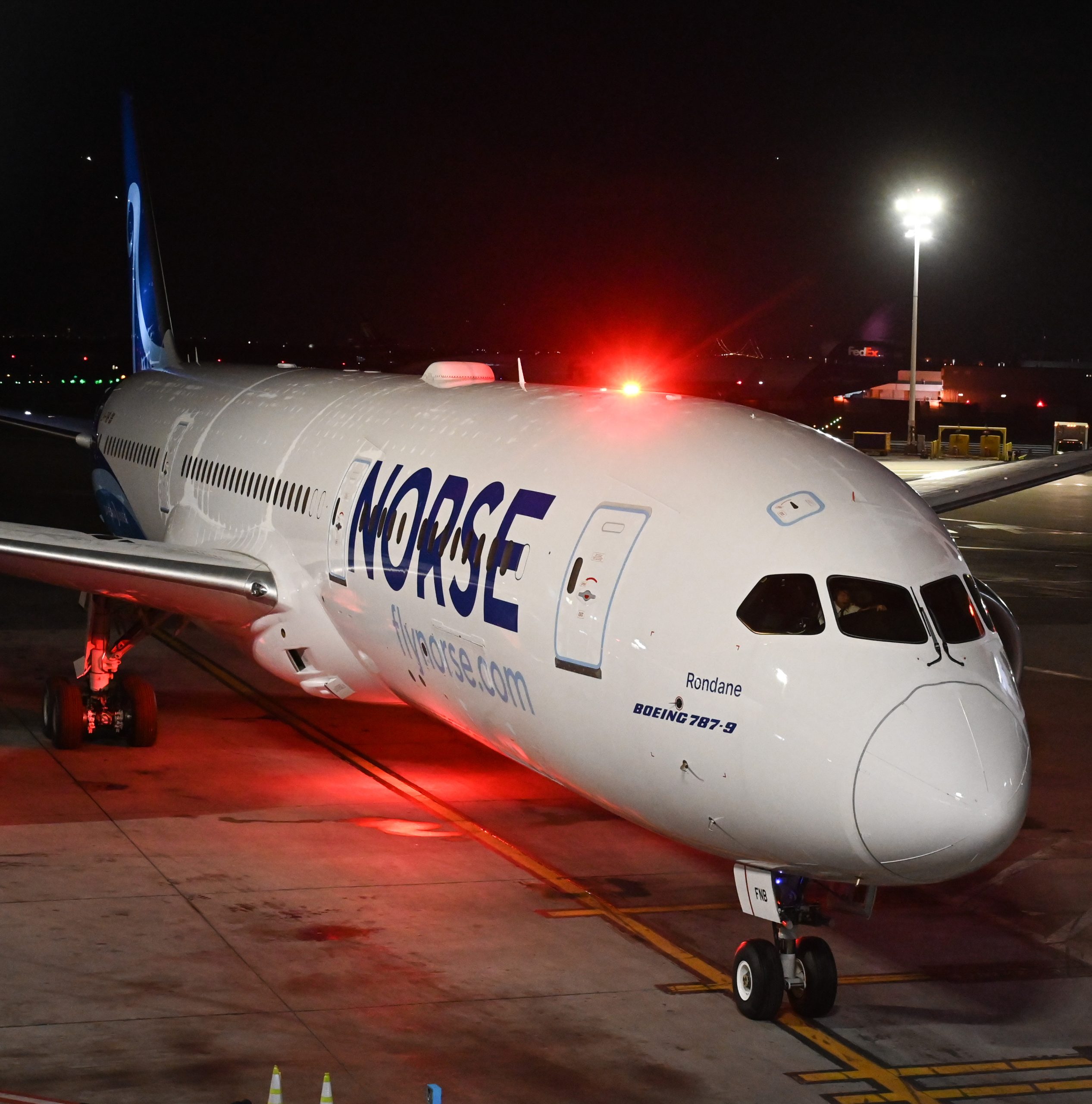