This past Tuesday our Associate editor, Joe Pesek, was able to sit down with the Chief of Marketing and Air Service Development at Cleveland Hopkins International Airport, Todd Payne, to discuss the airport’s history, its once great hub, and its recent resurgence thanks in large part to low cost and ultra low cost carriers. Joe was also able to tour the facility including the operations tower and the airport offices.

J: So Todd, let’s start by telling us a little bit about yourself.

T: My title is Chief of Air Marketing and Service Development, which means I work a lot with air service development, marketing, advertising, communications and community relations. My main role is to recruit new airlines, identify new markets that are under demand by travelers in the community, and find a way to create service. For example, the top of our list right now to fulfill is nonstop to San Diego. Ultimately it’s not just about our airport’s wants and needs, but it’s about the airlines’ as well. My counterparts, the route planners, meet with airport staff like myself at conferences that allow us to pitch and discuss new route ideas we have, which enables me to help grow the business at our airport. I also get to work with marketing for the airport which is very exciting. 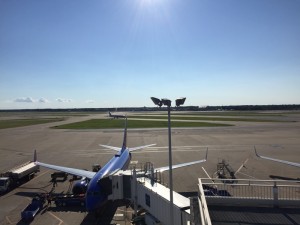 Southwest 737 waiting at the gate. 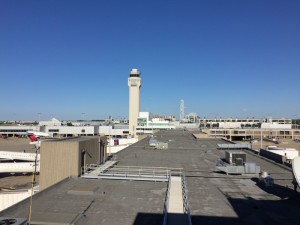 More views from the outside deck of the tower. 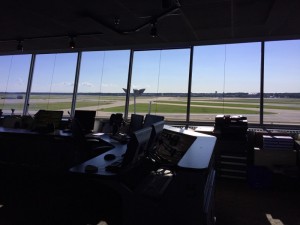 View from the tower

J: What got you interested or involved in the aviation industry?

T: I have always been an Airline Geek! My father was a successful automobile marketer and was traveling all over the place, which grew my love for the travel industry and marketing. I have been fortunate enough to have worked for four different airlines in my career: Piedmont, USAir, VIASA and Hawaiian. In between I also have worked in tourism and hospitality marketing for the Island of Aruba, Universal Studios Orlando, Sofitel Hotels and for the Columbus CVB (Experience Columbus). I’ve now been with CLE for 8.5 years.

J: What is Cleveland Hopkins’ significance as an airport in the US?

T: You would be surprised to learn that Cleveland actually was the first airport to have an air traffic control tower and radio controlled air traffic control system. We were also the first municipally owned airport in the US, 90 years ago on July 1, 1925, even before Los Angeles, New York and other major cities. We were the first airport to offer direct rail service to a downtown area. In the very early days of aviation all the greatest aviators flew to Cleveland, it’s neat to go back and look at pictures from that era. 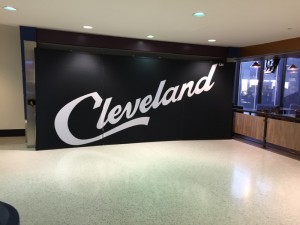 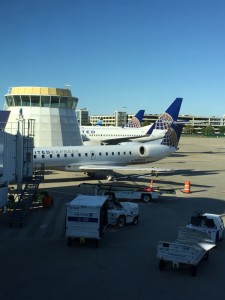 United aircraft seen next to the entry way between Concourse C and Concourse D. 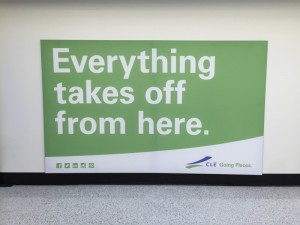 Latest advertisement slogan from the airport.

J: Can you touch briefly on United’s decision to pull its hub from Cleveland, and how the airport has responded to it?

T: Businesses have to make decisions. We certainly weren’t happy about it, but we also understand that business’ objective is to increase the value of their shareholder’s investment. United is still our largest airline customer at this airport, and despite what some portray as “doom and gloom,” we have seen growth at CLE from all our other carriers and there is even talks of United adding some capacity back at the airport. United still has 51 flights a day, which is still plenty of service. In the meantime, our airport and city have taken this opportunity to solicit other carriers as we desire to drive growth.

J: Cleveland Hopkins has a lot of history with being a major airport thanks in large part to Continental, followed by United with the merger, creating one of its hubs here. With the merger and eventual downsizing in Cleveland, there is now the empty Concourse D. Is there a reason why this concourse was chosen to no longer have service?

T: United has Concourse C and D in their lease. It was their decision which concourse they wanted to use in their inventory, and they chose to use the closer gates [at Concourse C]. This Concourse C lease in the rotunda currently runs until 2019. You could get from that decision they value being closer to the customer. Concourse D is actually the newest concourse at the airport, but it wasn’t built primarily for the local customer. It was designed to be convenient connecting concourse for Continental’s connecting passengers. Concourse D was also designed exclusively for smaller aircraft, such as ERJs, CRJs, and turbo props and offered jet bridges on one side and piers for ramp level boarding on the other side. 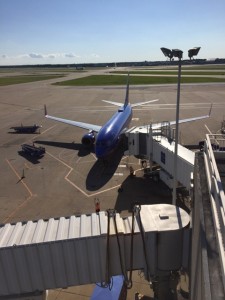 Southwest 737 at the airport. 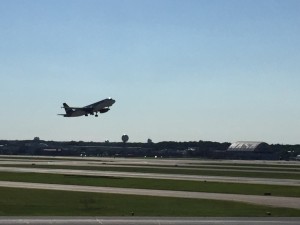 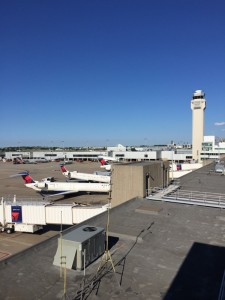 Delta aircraft at the airport.

J: Where has CLE seen growth in the last few years? How has it affected the customer base?

T: We transitioned from being an airport monopolized through the connecting business, into flying where people most desire to travel. It has allowed us to attract low cost carrier service that we never could have dreamed of a few years ago. Southwest has been here 22 years give or take, but now we’ve added ultra-low cost Frontier and Spirit, and our newest low costs carrier, JetBlue. It truly is a different world for us. We are stimulating passenger traffic that we’ve never had before…people going “holy cow I’ve never been able to afford to travel before” and would normally drive but instead are now able to fly.

J: Can you talk about the new service that JetBlue is offering?

T: JetBlue currently operates twice daily Embraer E-190 service to Boston and daily Airbus A320 service to Ft. Lauderdale. Fortunately for us, these aircraft are full every day. They are “giddy happy” with their Cleveland launch of service, and we think there is great potential for more service growth. JetBlue employs their own staff above the wing, rather than contract out their customer service team. We can say all the new carriers that have come in, including Frontier and Spirit, also feel pleased with their performance flying from Cleveland. 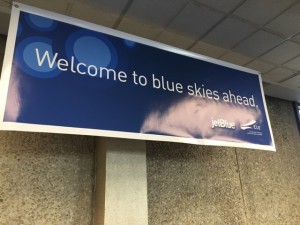 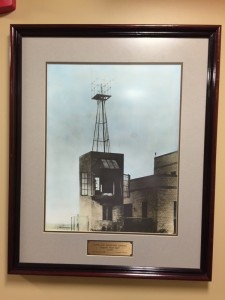 The world’s first ever ATC Tower. 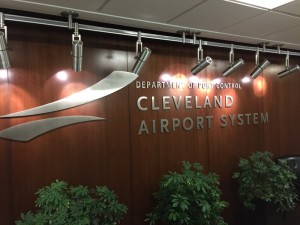 J: What is the role of the employees in this Operations Tower?

T: At any given time, three employees are here to ensure the safety of Cleveland Hopkins’ operations. All airports are administered by the FAA, and as such the paint, lights and signs must all be the same no matter which airport you are at in the United States. It’s up to us as local enforcement to enforce the federal laws in place. We assist with snow removal, fixing pavement, light replacement and even wildlife deprivation. Whether it’s a bird or a skunk, it can greatly affect and damage an aircraft similar to how it did with the “Miracle on the Hudson” in New York. Our job is to make sure the airfield stays safe for passengers but also nearby animals…we even have an EPA approved employee here to study the animals in the area as well as to monitor their overall safety being close to an airfield.

J: Do you deal with other incidents as well?

T: Of course! Operations is involved in just about everything from lost customers in the terminal to burned out light bulbs to beverage spills to all the small things that occur every day that most passengers don’t realize. It is our job to be able to accommodate all passengers, as the airport is here to serve everyone. There also could be bigger issues such as massive weather delays or electricity outages. Every day is different.

J: How has the aviation industry changed since you started?

T: The travel distribution system has changed dramatically. When I first started, travel agents were a big business driver and airlines were all paying commissions. With the changed landscape of the internet and personal booking, travel agents suddenly did not make a cent from the airlines, leading them to charge service fees to customers. Travel agents are still important, especially managing large corporate travel offices and for exotic leisure travel and cruises. I was once very involved in that distribution system which quickly became outdated. You have to be prepared to reinvent yourself if you are going to be in this industry, and if you are willing to do this you can be very successful but also be passionate and love every moment of working in this fast paced business.

We kindly thank Todd and CLE’s team for giving us the time to administer this interview.