In a statement, United also said that Henry Meyer, the lead independent director, will serve as non-executive chairman of the board of directors. 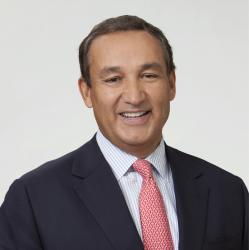 As of September 8th, Oscar Munoz is the CEO of United. (Photo provided by United Continental Holdings).

Meyer said the following about Munoz, “Oscar’s track record demonstrates that he has the right blend of strategic vision and strong leadership to continue United’s upward trajectory.”

Prior to working at United, Munoz served as the president and chief operating officer of the CSX Corporation. In addition, he has served in high-level positions at sizable consumer brands such as Coca-Cola and AT&T.

Smisek, the former chairman’s, resignation is linked with the Port Authority of New York and New Jersey’s investigation regarding the company. The attorney’s office in New Jersey is investigating whether United employees made improper attempts to influence port authority officials, according to a Bloomberg report. This investigation is not expected to affect normal operations.

Munoz said he would spend the first few months travelling the system visiting the company’s employees. As the announcement was made, the new CEO sent a letter to the employees. He said, “I took this job because I am excited by what we can do together.”

With a refreshed management team, United may have a brighter future, despite a turbulent few years.