US Airways Flies Into the Sunset, Finalizing the Merger with American

The brand’s legacy dates back to 1939 (hence the last flight’s number) when the airline, previously named Allegheny Airlines was based in Pittsburgh and Philadelphia, Pennsylvania and operated mostly in the Northeast.

Allegheny later rebranded in the 1970s, becoming USAir as it looked to become a larger carrier with increased service within the U.S. instead of just the North. The airline merged multiple times to help expand their service around the country, first with Pacific Southwest Airlines in 1980 and Piedmont Airlines in 1987.

US Airways slowly expanded in the 1990s, with Europe and a northeast “USAir Shuttle” appeared on the airline’s route maps. The airline was thriving as it entered its second rebranding, changing its name from USAir to US Airways, also rolling out a more colorful livery, with a dark blue/black fuselage becoming the primary color for the airline. 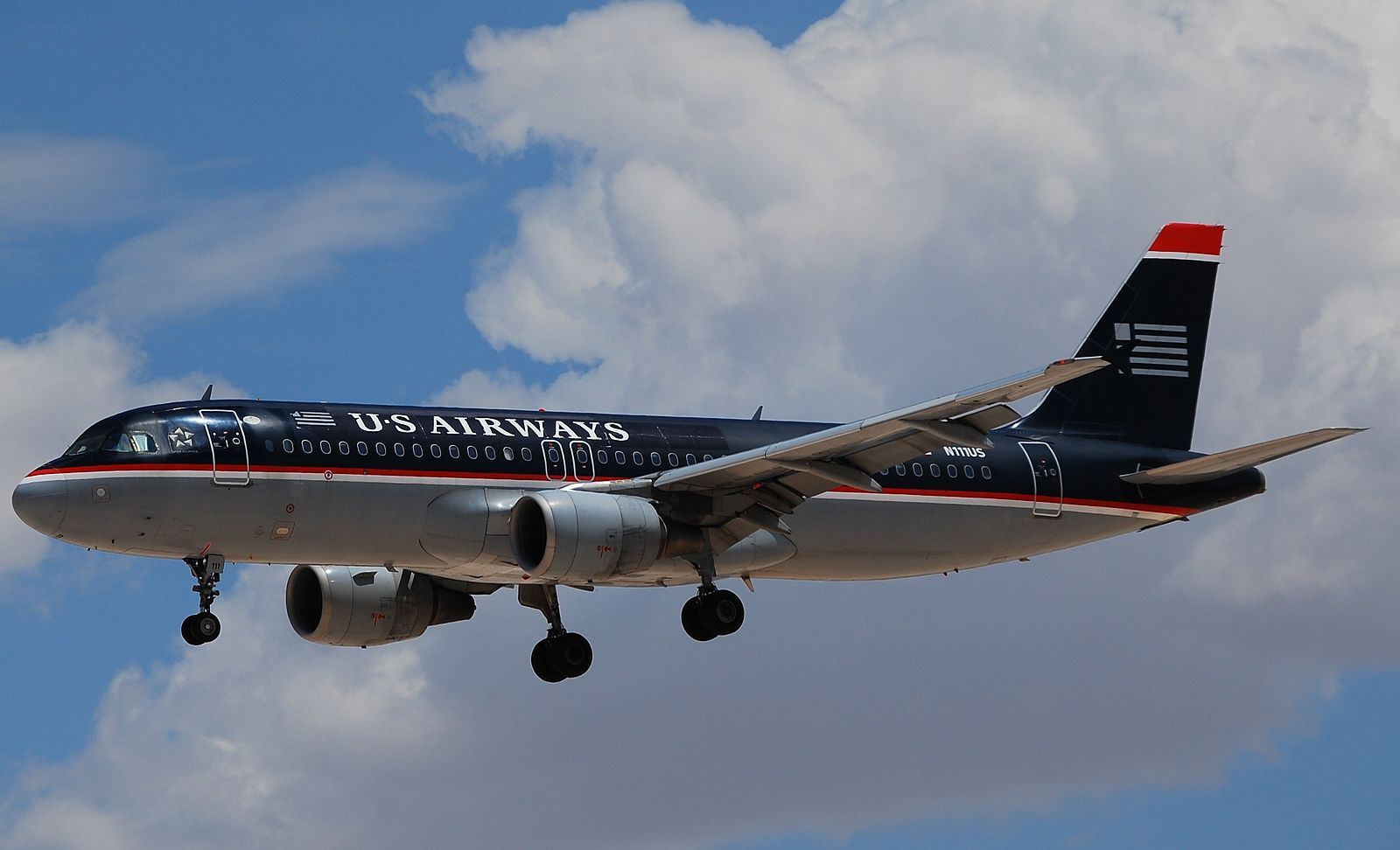 As the 21st century started, US Airways started to struggle. The airline rapidly began to lose cash as they shut down routes, removing Pittsburgh as a hub and phasing out some of the older aircraft from the fleet. Cost cutting didn’t work and the carrier merged into Arizona based America West Airlines, with US Airways being the surviving name. The merger saved the America West airline livery design and merged it with the US Airways livery. The airline stabilized until it began merging into American Airlines in 2013, a process which ends October 17 when US Airways flight 1939 touches down in Philadelphia.

Flight 1939 is named after the starting year of US Airways and will operate between San Francisco, California leaving at 9:55pm PDT on October 16th and will arrive in Philadelphia the next morning at 6:00am EDT. The aircraft will be an Airbus A321 that has the tail registration N152UW: it still wears the US Airways colors, compared to other A321s that have been repainted. Besides the last flight, US1939 will also fly to US Airways hubs such as Charlotte-Philadelphia, Charlotte-Phoenix and Phoenix-San Francisco, which the Phoenix – SFO flight sets up the 10pm departure back to Philadelphia.

The exact routing for US1939 goes as followed:

American Airlines will inherit most of US Airways’ current fleet, with only the very aged Boeing 767-200s and Boeing 737-300/400s being recently retired. American Airlines has already repainted some of the US Airways Airbus A320 family of aircraft (US Airways operated the A319, A320, and A321) and plans to have the A319s repainted and reconfigured by the end of 2016. The Airbus A320s are currently part of US Airways/American Airlines fleet are going to be replaced with newer Airbus A321s, even though some A320s wear the new American livery. American will also inherit the Airbus A330-200/300s, Boeing 757-200s in international configuration and Embraer ERJ-190s that were a part of US Airways’ fleet. The domestically configured Boeing 757-200s will be removed by December, of which there are currently nine in the fleet. US Airways will also transfer their orders, which include a handful of Airbus A321s and 22 Airbus A350-900s, which were to replace the A330s.

US Airways’ hubs will maintain their size and hub status for the time being. The largest city for US Airways was Charlotte, in which the airline operating more than 600 flights a day. The other hubs include Philadelphia, Phoenix, and Washington-National Airport, with all having more than 200 flights a day. Some gates have been given up in D.C. because American Airlines already operates a large amount of operations at the airports. US Airways signage will be removed from all US Airways destinations by the time that the last flight touches down.

Just after midnight on Saturday morning, both airlines’ reservation systems will become one and USAirways.com will shut down.

On April 8th, 2015, the famed “Cactus” callsign was retired and American Airlines Group received their S.O.C. (Single Operating Certificate) from the FAA. While this was not entirely noticeable to passengers, it was a major step forward in the merger process; the airlines could legally operate as one.

BONUS: American and US Airways Recieve Their Single Operating Certificate 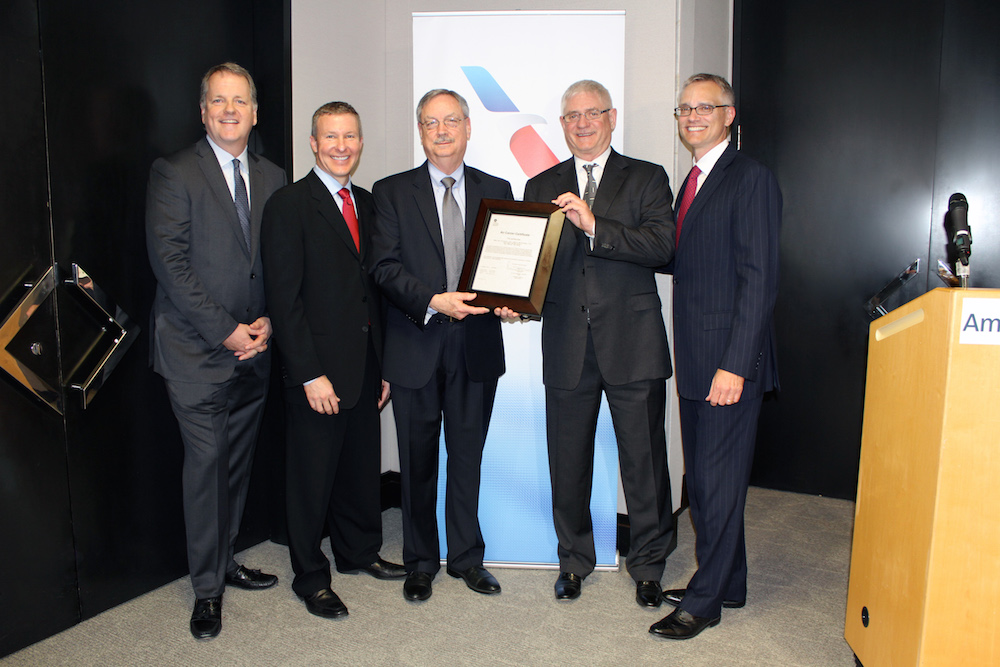 The US Airways heritage livery (Photo provided by American Airlines)

The aviation industry is saying goodbye to another airline. As of October 16th, there were 2,002 people on the standby list for US1939. Also, on Twitter, AvGeeks and frequent US Airways fliers alike are sharing photos and stories from flying or working with the brand. The hashtag for the last flight is #US1939.

@MD80com @USAirways here’s a look back in history at the #longbeach plant when DC-9’s where made brand new!!! pic.twitter.com/ixRDz37Nkj

On Saturday morning, the doors will have officially closed on the US Airways/American Airlines merger, ending approximately three years of hard work to complete the extensive integration process. In less than 24 hours, US Airways and American Airlines will officially be one, forming the biggest airline in the world.