Nearly half a century after its first flight from Paris to New York in the 1970s, the aircraft affectionately known as the Jumbo Jet will bid an emotional farewell to the Boeing 747 with a tribute flight.

On 14 January 2016, Air France is offering its customers a unique experience onboard an exceptional flight over France and its legendary landmarks. On arrival at Paris-Charles de Gaulle, the passengers of flight AF747 will be invited to discover the company’s aircraft maintenance workshops and share a tribute drink at the foot of the aircraft. Flight AF747 will take off at 11:30am from Paris-Charles de Gaulle for a unique experience: Business class lunch and champagne for all, with an inflight commentary including a tour of France’s history and legendary landmarks.

Since the early seventies, the Boeing 747 has been an icon in international air travel due to its easily recognizable design and revolutionary on-board technology. For cargo, the 747 has pressurized holds, which were ventilated and protected against fire. Four times larger than the previous generation of Boeing, the 707, the Jumbo Jet could carry 122 tons of cargo. As one of the first airlines to operate this aircraft, Air France made it the flagship of its long-haul fleet. Most of the company’s long-haul destinations – New York, Montreal, the French West Indies, Reunion, and locations in Asia – have been served by the jet at some point. 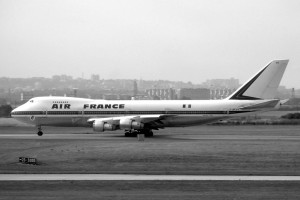 The first Air France 747 flight took place on June 3, 1970 on the Paris to New York route. In the cabin, Air France started innovating to better serve its customers. The role of chief purser was created to coordinate the service and attention paid to customers in this aircraft which could carry up to 500 passengers.

In the 1990s, with the arrival of the Boeing 777 offering better fuel efficiency and lately with the arrival of the Airbus A380 to Air France, the 747 fleet began its decline. And unlike Lufthansa, Air France opted to not to order the 747-8i, the stretched and modernized version which continues in production, although most of the sales logs for the type have been for its freighter version. Many other airlines such as Delta Air Lines are retiring the Boeing 747 out of their fleet due to its inefficiency when compared to newer Boeing 777 aircraft. Air France’s 65 Boeing 777 aircraft are being equipped with the company’s new long-haul cabins: designer suites in the La Première cabin, a cocoon in the sky in the business cabin, and new redesigned seats in premium economy and economy for optimal travel comfort.

The last 747F already left the Air France Cargo fleet in 2014, while the crews of last five 747-400 in service were redeployed on the Boeing 777 or the Airbus A320. And while no Air France 747-400 will be left for display, the 747-100 on display at the Air France Air Museum at Le Bourget will be the sole witness of the “Golden Jumbo Era” at the French carrier.

To celebrate this event and this chapter of Air France’s history, the airline is unveiling its new-look historical tribute website: airfrancelasaga.com. To travel through the company’s rich heritage, the website has had a complete makeover. With videos and photos, Air France is reliving its history, its professions, its fleet, its network, and the attention it has always paid to its customers.