How Is It Possible to Land An Airliner on a Taxiway?

An Alaska Airlines 737 landed on a taxiway at Seattle’s SeaTac Airport on December 19th at about 8:30 in the morning. While it is not unknown for this sort of thing to happen, it is thankfully rare but also exceedingly dangerous. Luckily for this crew and their passengers, the taxiway was clear at the time and the landing was uneventful.

Taking off or landing on the wrong piece of pavement has been the cause of a number of incidents and accidents over the years. One of the most deadly in recent memory was the crash of a Singapore Airlines 747 which attempted to take-off on a closed runway back in 2000 in Tapei and impacted parked construction equipment killing 76 employees.

Another deadly incident was that of Comair 5191 whose pilots mistook a shorter runway for the one they had been cleared to use, resulting in an overrun accident and 49 fatalities.

Wrong runway and wrong airport landings also occur, but on occasion, good luck smiles on the errant pilots. A Southwest Airlines 737 enroute to Branson, Mo. landed at a small general aviation airport several miles short of its intended destination last year. Quickly realizing their mistake, the pilots were able to stop the plane on the very short runway thereby averting a serious accident.

I even recall an incident from many years ago when an American Airlines airplane landed at Biggs Army Airfield instead of El Paso International, which was its destination. The two airports are immediately adjacent to one another. I remember this incident because not long after that, I had a student pilot of mine attempt to land at El Paso while our destination was Biggs.

As you can see, wrong runway errors are committed by both inexperienced pilots as well as seasoned aviators.

So with the possibility for such deadly results, how is it that pilots can take off or land on the wrong runway or a taxiway? The answer is that it is not easy to do this, but it is easier than you might think, with a common factor in all of these incidents and accidents. That factor is complacency.

How Could This Happen?

Alaska flight 27, a Boeing 737-900ER, arrived in the Seattle area from Chicago at about 08:15 AM and was vectored by Seattle Approach Control to an ILS approach to runway 16 Right. SeaTac has three parallel runways labeled 16 Left, Center, and Right. The “16” denotes the approximate runway heading of 160 degrees (it’s actually 163 degrees). There is also a taxiway named “T” or Tango, running parallel to the runways between the center and right runway.

An ILS is a ground-based, radio-guided approach which provides both vertical and horizontal guidance to the pilots. When flying this approach, the pilots would be presented with precise lateral course information. Deviation from the course or a lineup on the wrong runway would be prominently displayed on the instruments.

For this reason, pilots are encouraged or required to always have ILS information tuned in and displayed even when flying a visual approach. And speaking of which, the weather at the time of the incident was quite good:

This translates to a thin ceiling at 2500 feet at the top of the hour and no ceiling in the report at the bottom of the hour with the visibility being very good. Evidently weather was not a factor and the aircraft was cleared for an instrument approach to the outside runway. How then did they end up on the taxiway?

Just a few minutes before landing, and after the aircraft had switched from Seattle Approach Control to Seattle Tower, the tower controller asked if they’d like to land on the center runway. The aircraft stated that they would like to switch runways and were subsequently cleared to land on runway 16 Center.

This maneuver is called a “sidestep” and is a visual maneuver, meaning that it is accomplished using visual and not instrument cues. A tower controller may offer a different runway to a landing aircraft for a number of reasons such as tight spacing on a preceding aircraft, or perhaps a desire to get an airplane with a flow time airborne. In this case, it appears as if the tower controller was simply doing a favor for the Alaska jet as the taxi time from the closer runway would be shorter.

You can listen to the ATC audio here:

So at this point, the aircraft accepted the sidestep clearance and would start maneuvering visually to land on the center runway. What else might have affected the crew’s ability to identify the correct runway?

It’s hard to say for sure but there are some clues. For one, the center runway has just been completely rebuilt. The new pavement on the freshly rebuilt runway is still most likely clean and lacking the usual rubber deposits that most runways have. 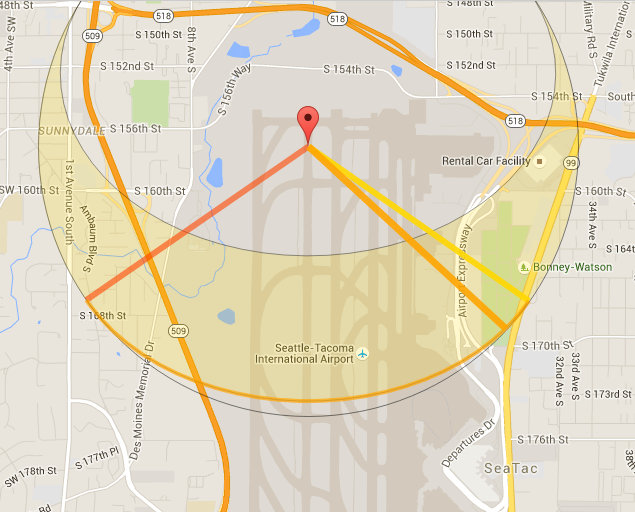 The sun direction at the time

Another consideration would be the angle of the sun. The aircraft touched down at 8:31 AM and sunrise in Seattle that morning was at 7:58 AM. The angle of their approach would have put the sun almost directly in their eyes further obscuring the markings on the taxiway as seen in the graphic below. This would have been made worse as they attempted to maneuver to the left of course to line up on the center runway.

How Could This have been Prevented?

One of the more challenging aspects of aviation is that seemingly routine or innocuous situations may contain hidden danger. And there will rarely be obvious signs pointing out these pitfalls. This is why it is incumbent upon pilots to maintain vigilance during not only difficult weather, but also during a simple visual approach in good weather. Some might say especially during good weather.

Being able to recognize when conditions are subtly changing while having the appearance of normalcy is a core skill used to battle complacency.

Another technique that could have been used would have been to have the non-flying pilot tune in the frequency of the approach to the new runway. Often this can seem redundant if the landing runway is in sight, but this crew is probably now wishing that they had.

There will be an investigation. The FAA has already said that they are looking into the event. The pilots will most likely not be fired but they may face some discipline in the terms of time off from work which means lost income. They will also likely have some retraining or a checkride before flying again.

The pilots may, however, not face any punitive action at all if this event is accepted into a safety reporting program. In these industry-labor-regulator partnerships, mistakes made in good faith can be provided immunity from sanction to enhance the reporting of safety related information.

The hazard that this taxiway presents has already been noted in a warning printed on the airport layout depiction as seen below. That this hazard was known may even mitigate in the pilot’s favor. 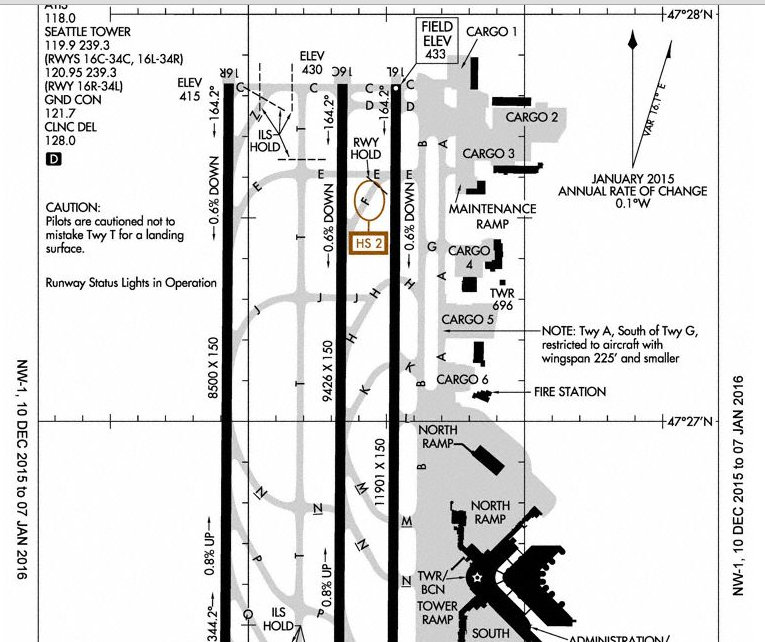 We can probably expect to see some new measures such as large letters painted on the taxiway and further warnings designed to prevent this from happening again but nothing is as effective as maintaining a watch against complacency.

I am currently a captain flying a Boeing 737 for a major American airline. I’ve been flying since joining the Air Force in the early 1980s and retired from the service in 2003, spending nine years on active duty and eleven in the AF Reserve. I flew many aircraft for the military include the T-37 primary trainer, the KC-135 tanker and the C-5 cargo aircraft. I’ve been based in Texas, California, Arizona and Okinawa, Japan.

I’ve been employed with my current company since the late 1980s flying various Boeing aircraft and have been a captain for over 10 years.

This post was written by Rob Graves. You can view his site here.