Delta Air Lines gathered media, along with some of their very own crew, and even customers who have embarked on the Delta experience, 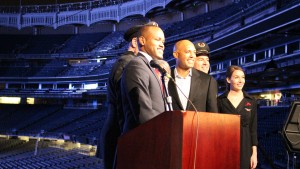 to celebrate the renewal of the airline’s partnership with the New York Yankees.  Yankee Stadium, known for its massive baseball field similar to most stadiums, also hosts the Delta Sky 360 Suite.  During the regular season, Yankee fans have the opportunity to watch the game from a breathtaking 360-degree panoramic view.  Inside the 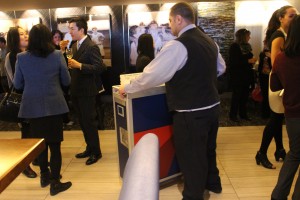 suite, fans are able to eat, drink, and relax.  This is exactly what Delta fans did to celebrate the renewal of the partnership with the team for another eight years.

Former Yankees pitcher, Mariano Rivera, joined Gail Grimmett, Delta’s Senior Vice President of New York, in lighting a brand new sign at the stadium, which would add a special touch to every Yankees game through 2023. Gail Grimmett told us at the event that Delta’s changing the Yankee Stadium skyline made history. The sign located above the scoreboard in the right-center field is said by Delta to be the first time “a New York Yankees partner has been granted such significant exposure.”  The sign was illuminated by the Delta executive, and former player, on March 3, which truly kicked off the extension of the partnership. The agreement was originally announced on October 5 of last year.  At the event, Mariano Rivera engaged in fan photos, and guests had the opportunity to ho 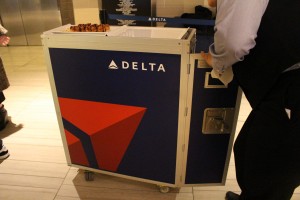 ld the famous rings of the Yankees as well as signature bats.

One major term also in the partnership is for Delta to actually fly the Yankees. In fact, the airline flew the well-known team almost 300,000 miles over the past eight years.  In an interview with Gail Grimmett, we were told that the future plans are to fly the Yankees on reconfigured Boeing 757s. As a part of the association with the team, Delta plans to engage in events and fan promotions during both the regular season and even spring training.  The team will be continuing to prepare itself for Opening Day at Tampa, Florida’s George M. Steinbrenner Field through March 31st.

When the regular season lau 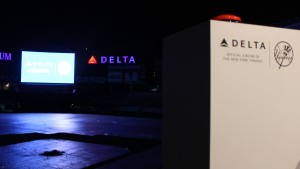 nches on April 4th, at the team’s home stadium, they will face the Houston Astros.  Delta plans to explore its presence on baseline rotational and LED signs; seen through a daily in-game scoreboard feature as well as in Yankees print publications.  According to the Yankees Senior Vice President of Corporate Sales and Sponsorships the team “values [their] tremendous ongoing relationship with Delta.”  Additionally, he says the team is excited “to continue working with Delta to strengthen its global brand exposure, especially in New York, where it has achieved unquestionable success.” 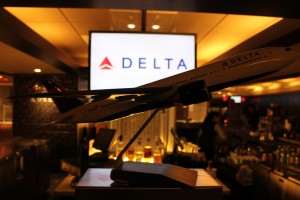 , the airline also renewed their partnership with the New York Mets, making the airline the “Official Airline of New York baseball.”  The Mets’ stadium, CitiField, also sports a Delta Sky360 Club which is a club level space.  In addition, Delta plans to tag along with the Mets on programs that concern community outreach, as well as spend time in the palm’s of guest’s hands that explore the new ballpark app. The airline will also sponsor all cultural-themed home games during the regular season.

It appears that Delta Air Lines is equally elated to be hosting both teams in the air, just as they do on the ground.