These neighbouring Midwestern states generate a lot of agriculture and industrial goods for the United States. More known for their college sports, Iowa & Wisconsin do provide some options for travellers heading to the major city of Chicago, Illinois. On December 28, 1846, Iowa became the 29th state in the Union and Wisconsin was the 30th state in the USA in May 1848.

Walkway connecting terminals in the Eastern Iowa Airport featuring flags from many countries. Picture from Wikimedia.

Two miles west of Interstate 380, The Eastern Iowa Airport features two concrete/asphalt runways (labelled 9/27 at 8,600 feet & 13/31 at 6,200 feet), 13 gates and two concourses. The airport’s first commercial presence was in 1947 with United Airlines providing an east-west passenger service and Ozark Airlines provided north-south passenger services in the 1950s. By 1969, the airport was recording 31 airline flights per day and was averaging 353,000 passengers per year. In 2008, the field announced that they had welcomed one million passengers per year to the airport as well as sending an extra one million passengers per year out of the airport to other destinations across the country.

Recording over 2.3 million passengers & 130 million pounds of cargo per year, Des Moines International Airport is Iowa’s largest airport. Featuring two runways at over 9,000 feet (labelled 5/23 & 13/31), the airport averages over 80,000 airport operations per year and has 135 aircraft based at the field. Construction of the airport completed in 1933, after one year in development and featured their first passenger terminal not long after its completion. The airport was renamed from Des Moines Airport to the “International” symbol in 1986 to “acknowledge the presence of a US Customs Service Office” at the field.

American Airlines currently dominate the airport, handling 29% of all passenger traffic going to and from the airport on flights to Dallas Fort-Worth, Phoenix-Sky Harbor, Charlotte, Chicago & Washington-National. Delta Airlines is the second big hitter out of Des Moines handling 24% of all traffic to destinations such as Atlanta, Detroit, Minneapolis, New York and Salt Lake City respectively. Other than that, carriers such as Allegiant Air, Southwest Airlines, Frontier & United also operate out of the airport. On a cargo perspective, carriers such as AirNet Express, FedEx, Flight Express & UPS Airlines operate flights to Denver-Centennial, DuPage, Omaha, Rochester, Memphis, Fort Dodge, Kansas-City-Downtown, St Louis-Cahokia, Waterloo, Burbank. Newark, Sacramento, Spokane, Philadelphia and Portland. 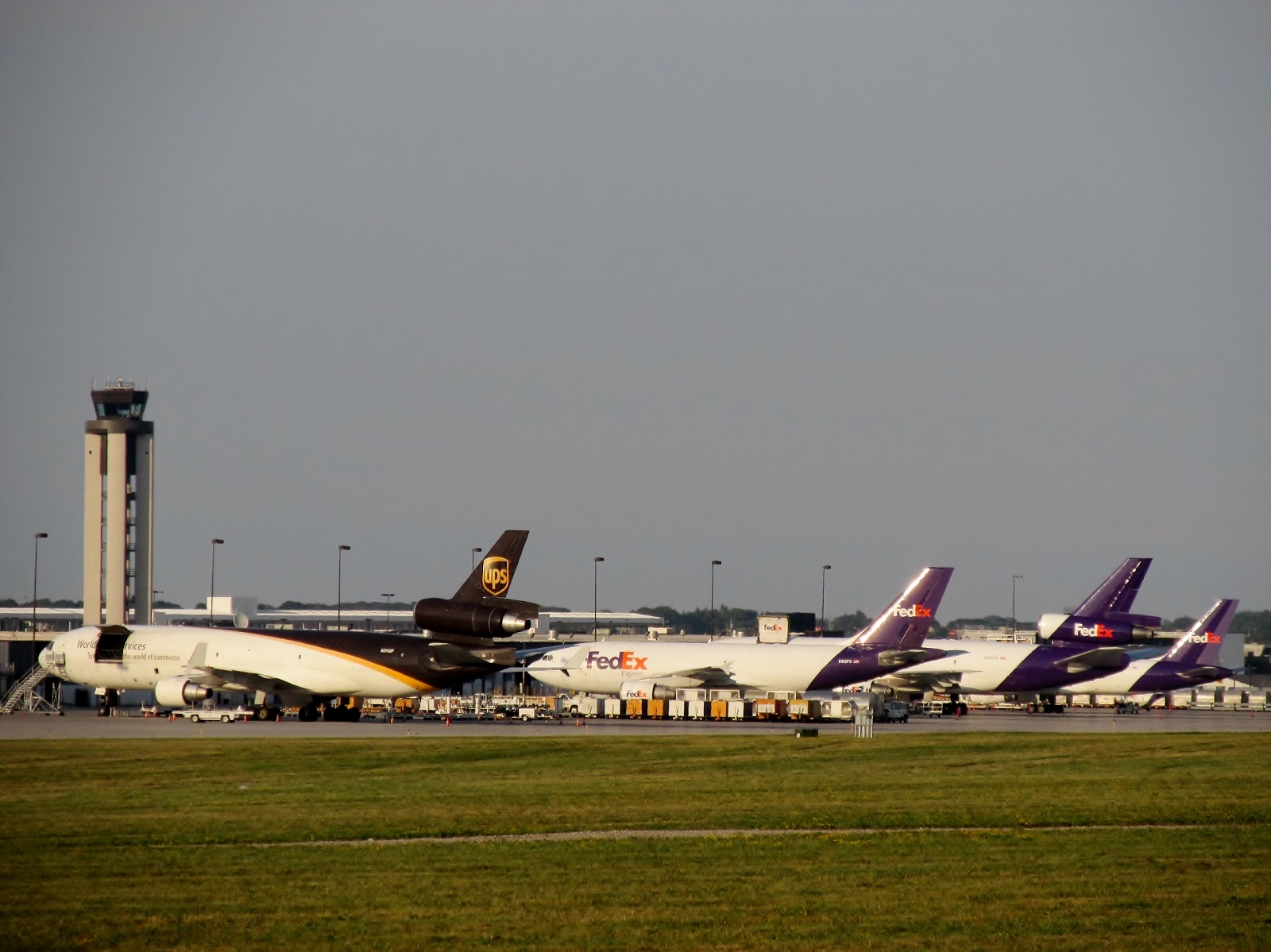 Featuring five asphalt/concrete runways (labelled 01L/19R, 01R/19L, 07L/25R, 07R/25L & 13/31), General Mitchell International Airport is home to over 100,000 aircraft operations per year, bases over 100 aircraft and carries an average of 6.5 million passengers per year. The airport has 48 gates and 40 jetbridges on their three concourses and only features one terminal. The airfield’s history dates back to the 1920s as Hamilton Airport as it was privately owned by Thomas Hamilton. Milwaukee County eventually bought the land in October 1926 and then opened the airfield as Hirschbuehl Farmhouse in July 1927. The commercial terminal opened in 1955 and was formerly a hub for AirTran Airways, Frontier and Midwest Airlines. After the Southwest Airlines/AirTran merger, Milwaukee became a focus for Southwest in terms of passenger enplanements and deplanements. 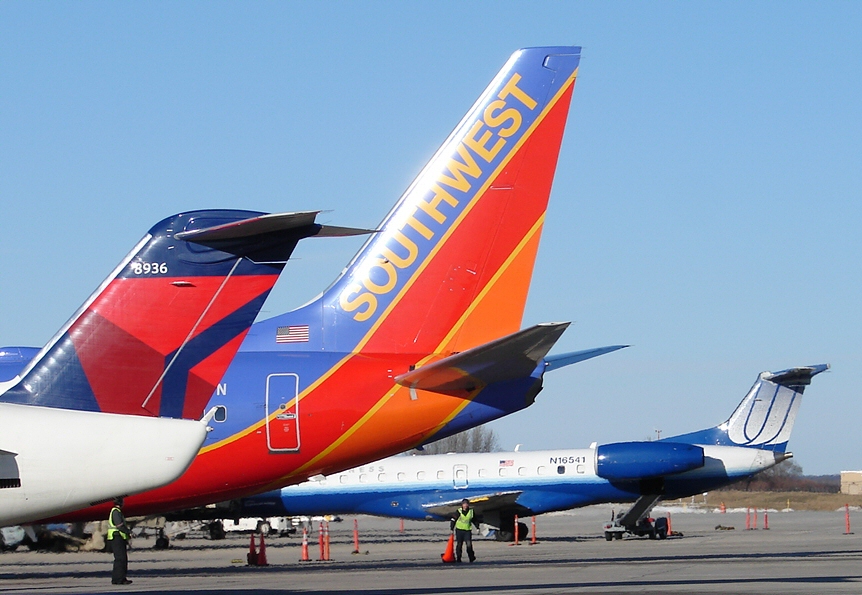 Formerly known as Truax Field, Dane County Regional Airport is a civil-military airport six miles to the northeast of Madison. The airport has three concrete runways (labelled 18/36 at 9,006 feet, 3/21 at 7,200 feet & 14/32 at 5,846 feet) and carries an average of 866,000 passengers per year from over 79,000 yearly aircraft operations. The airfield has 167 aircraft based at the field. Dane County was known as Truax Field in the 1940’s during the Second World War as it was activated as a U.S Army Air Forces and was used by the Army Air Force Eastern Technical Training Center which was used to train radio operators and mechanics. By 1943, the field became home for training these mechanics and operators on the B-29 Superfortress equipment for the 334th Army Air Force Base Unit.

Green Bay International is a commercial general aviation based airfield with two concrete runways (labelled 18/36 at 8,399 feet & 6/24 at 7,699 feet). The field is home to 112 aircraft as well as an average of over 48,000 aircraft operations per year. In the year ending August 2016, the airfield recorded 276,000 passengers depart from the airfield in the 12 month period (August 2015-16). The top destination is Chicago O’Hare with American and United Airlines. They collectively carry an average of over 90,000 passengers per year between the two airports and the two carriers.

Carriers such as American Eagle, Delta & United dominate the airport with services to Chicago, Detroit, Minneapolis & Atlanta respectively. For cargo, AirNet Systems operate services to Milwaukee, while Freight Runners Express operates routes to Milwaukee also and Appleton. Pro Aire Cargo also has services to Iron Mountain too. Out of the 112 aircraft based at the field, 50 are single-engine, 38 are multi-engine, 18 are jets, five being helicopters and one being an ultra-light.

Appleton International is the final airport of interest in this state series. The field features two concrete runways (labelled 3/21 at 8,002 feet & 12/30 at 6,501 feet) and is host to over half a million passengers served per year on average. The airfield also averages 33,000 aircraft operations per year and bases 71 aircraft at the Outagamie County-based airport. The airfield opened in 1936 as a municipal airport. The airport has been subjected to expansion over the past 40 years, featuring four expansions between 1983 and 2001. The airport has planned over the course of the year to build new facilities such as a third baggage claim belt, meeting rooms and a brand new restaurant that will provide onlookers with a view of the airfield and its operations.

Overall, these two states have a lot going on in terms of the aviation industry. Each state contains some major airports which operate to many destinations across the country as well as the Caribbean. The next boost for the airports in the two states is the expansion of their growth into the international market and to hit some of the heavy hitting destinations across the globe.