In 1986, Boeing announced plans for a stretched version of the Boeing 767, tentatively coined as the Boeing 767-X, which would retain many of the elements of the standard 767, but would expand and lengthen the fuselage. Airlines, however, were unimpressed, wanting a wider fuselage and a lower operating cost than the 767. As a result, Boeing was forced to turn away from a likely 3-engine design to a twin-engine configuration. Soon after, on Dec. 8, 1989, Boeing began accepting orders for the newly named Boeing 777’s first generation, the 777-200. The newest and thus far most ordered variant of the 777, the Boeing 777-300ER, made its first flight on Feb. 24, 2003. The first delivery of the new “Extended Range” aircraft went to Air France, ILFC on Apr. 29, 2004. 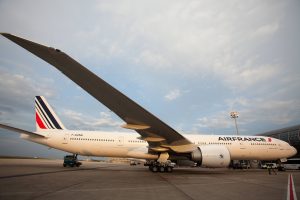 In 2004, Airbus announced their plans to create a new aircraft to replace their aging Airbus A340s and to compete with Boeing’s 777 and their relatively new 787. After airlines rejected redesigns of the A330, the manufacturer announced they would create an entirely new aircraft type known as the Airbus A350XWB. Before production began, Airbus announced plans for multiple variants, including the -800, -900, -900ULR, and -1000. The first A350-900 prototype took flight in June 2013, and the first delivery went to Qatar Airways on Dec. 22, 2014. After customer demand for the -800 diminished, with many airlines switching their orders to the A350-900 variant, production began on the first prototypes for the -1000 variant. The first completed body of the new variant rolled out of the factory on Apr. 15, 2016. Finally, the first prototype took flight Thursday at Airbus’ principle factory in Toulouse France, setting in motion the aircraft that could be the nearest competitor to Boeing’s 777-300ER. 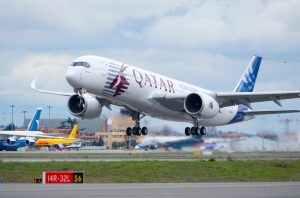 An Airbus A350 departs for a test flight (Photo: Airbus)

The two aircraft variants, each the “latest and greatest” of their respective types, bear one striking resemblance: the 777-300ER has a length of 242 ft. 4 in., while the A350-1000 has a length of 242 ft. 3 in., a difference of only one inch. That remarkable similarity raises the question: if their lengths are so similar, what exactly makes these two aircraft different from one another?

Other than the length, the wingspan of the two aircraft is quite similar. The 777-300ER stands wider, with a wingspan of 212 feet 7 inches, but the A350 is close behind, with two inches less from wingtip to wingtip. The 777 is also taller, measuring 60 feet 8 inches to the top of the tail, almost three feet taller than its French competition. Cabin width is another key measurement, often determining how many seats will be added within the aircraft. The 777-300 takes the cake here with a distance of 19 feet 2 inches from wall to wall. The A350, on the other hand, measures 18 feet 5 inches, nearly 9 inches narrower than the 777 variant. Airbus also says their jet is 30 tons lighter than its American-built counterpart, which helps it to be 25 percent more cost-efficient, though no exact numbers exist on that front.

Even though Boeing’s biggest twin-engine jet is slightly larger than Airbus’, the differences are minuscule, less than 5 percent in terms of height and .04 percent in their lengths. In the end, it is highly unlikely passengers will be able to easily discern the difference solely in the cabin width, but these simple measurements show the similarities between the two aircraft.

Both aircraft allow airlines to dream up new and exciting first and business class concepts, but in hindsight, the majority of passengers will be seated in the back of the airplane. Airbus states that the capacity of the A350-1000 in “typical” configuration is 366 seats, while Boeing states the 777-300ER can hold 365 in a standard configuration. 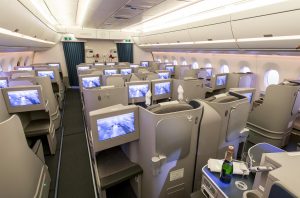 Almost all airlines have transitioned to 10-abreast seats in economy on the 777-300ER, leaving many passengers squished in the new 17.5-inch seats. No airlines, however, have yet passed nine per row on the A350-900, which has the same cabin width as the -1000 variant. With the slightly smaller cabin, seats in that configuration on the A350 generally are 18 inches wide.

The A350XWB, like Boeing’s 787 Dreamliner, is pressurized to a lower altitude than the majority of commercial jets today. The aircraft is pressurized to only 6,000 feet, while the 777-300ER’s cabin pressure, like most other non-composite airliners, generally sits around 8,000 feet when airborne. This difference can certainly allow passengers to arrive at their destinations feeling refreshed and rested.

The A350-1000 actually has one of the shortest ranges of all A350 variants, paling in comparison to the 10,800 nautical miles range of Airbus’ ACJ350, Airbus’ business jet version of the A350, based on the A350-900ULR. Anyhow, a higher maximum range allows airlines to open more doors to their route networks, keeping the world’s passengers traveling farther and faster and eliminating any problems that may come with connecting flights.

Both the A350-1000 and 777-300ER are pushing the bounds of what twin-engine aircraft can be and do. They are the largest of their type, guzzling less fuel than their bigger four-engine counterparts, while still delivering hundreds of seats worth of capacity.

Currently, there are 195 orders for the A350-1000 and 810 orders for A350 aircraft as a whole, while the 777-300ER has 809 orders in its time, and 1902 orders for the entire program. Despite their already higher order number, Boeing already responded to the A350-1000’s release, announcing their 777-X program in 2013. Two of those aircraft will carry over 400 passengers, approaching passenger numbers of their own 747 aircraft. Airbus has not announced plans for anything that could bridge the gap between the capacity of the A350-1000 and the A380, which is capable of seating 850 people in an all-economy class configuration. Airbus’s CEO Fabrice Bregier told USA Today that his company isn’t ready to push for another large aircraft, saying, ““It’s much too early today, and I’m not convinced that there will be a large market,” Bregier said. “We would look at the market and the business case. And I can tell you we’re far away from that.”

Passengers really cannot lose in this situation. As competition between the A350 and 777 arises, the manufacturers will strive to make their aircraft better than they ever have been before. Now, no connection is necessary to fly distances that could have taken five or more different legs years ago. On top of that, Boeing has said the 777-X will have the same technology as the A350 and 787, allowing the cabin to be pressurized to a lower altitude, which is just another example of how the manufacturers are looking to better the customer experience.

Congrats @Airbus on a successful first flight for the #A350-1000. Competition makes our industry stronger.

Competition is harsh between Airbus and Boeing, neither missing a chance to subtly insult the other’s aircraft or methods. Both manufacturers, however, feel they have accomplished their goals, at least to this point, with their current programs, with Bregier even telling USA Today, “What we wanted has been achieved,” before the A350-1000’s first flight on Thursday. Though they may revel in their glory for a short time, the fruits of their labors will be able to impact their customers for decades to come.