The world’s shortest A380 flight arrives in Doha (Photo: Emirates)

Emirates Now Operates the World’s Shortest and Longest A380 Routes

Emirates is the airline of the superlatives. The fast growing company has broken many records over the years since it commenced operations in 1985. At that time, it was operating with only two aircraft. Today, Emirates is flying one of the world’s largest fleet of Airbus A380s and Boeing 777s.

Flying Dubai to Doha on the Shortest A380 Flight

The flight to Doha is approximately 235 miles. The Qatari city is Emirates’ 45th A380 destination to be served by the flagship aircraft. 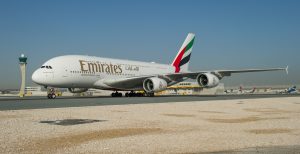 The Emirates A380 serving Doha operates in a three-class configuration, with 429 seats in economy on the main deck, 76 flat-bed seats in business class, and 14 First Class Private Suites on the upper deck. Prices start from about $210 in Economy and $595 in business for a roundtrip ticket.

Before Doha, Emirates was flying from Dubai to Kuwait City which was the world’s shortest A380 route at the time, with just 851 km (529 miles) and 1 hour 45 minutes duration. Launched in July 2014, this daily A380 service between Dubai and Kuwait was the shortest for any A380. 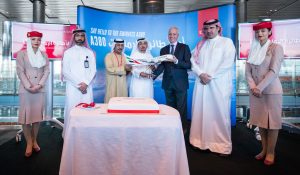 A Strong Competition Between Emirates and Qatar Airways

Emirates has reinforced its presence in Doha over the years, operating nine flights on a daily basis from Dubai, making it the most served destination in the airline’s network. In the last five years, Emirates has carried nearly 4 million passengers between the two cities with 63 flights per week.

The increase in capacity between Dubai and Doha supports the trade inroads between the UAE and Qatar. The UAE is Qatar’s fifth largest trading partner with bilateral trade volumes reaching over $7 billion in 2015. These volumes will grow as more investment opportunities open up in the next few years as Dubai sets to host Expo 2020 in addition to Doha hosting the Football World Cup in 2022.

Emirates has developed its strategy of making Dubai airport a sole hub to connect Europe to Asia and the Middle East to America.

With strong competition with its neighbors and rivals, Emirates is reinforcing the Dubai hub to attract more customers traveling to Qatar through Dubai. The timing of the A380 service between the two cities is allowing passengers from Doha to fly through Dubai to Paris, New York, London Heathrow, Frankfurt, Milan or Manchester with a seamless A380 experience.

Through its Dubai hub, Emirates is now connecting passengers to its route network of over 150 destinations, served by a fleet of all wide-body aircraft. The airline’s network also encompasses 45 cities around the globe served by the iconic A380.

The Longest Route in the World – Operated by an Emirates A380

In March 2016, Emirates was also flying the longest route in the world on an A380 with its daily non-stop service between Dubai and Auckland on an A380 aircraft, less than a year after operating the flight with a Boeing 777-200LR.

The airline has been flying the route since March 1, in addition to three daily A380s flying from Auckland to Dubai and beyond via Australia, and a daily Boeing 777-300ER from Christchurch. The route is also the longest in duration, with passengers spending 17 hours 15 minutes in the air during the return leg from Auckland to Dubai. 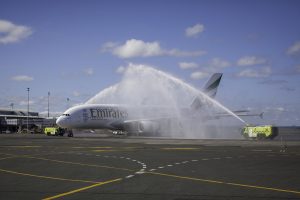 The world’s longest flight operated by the Airbus A380 (Photo: Emirates)

Operating eastbound as flight EK448, the service departs Dubai at 10:05 a.m. and arrives in Auckland the following day at 11:10 a.m. (local time). Westbound flight EK449 departs Auckland each night at 9:15 p.m., arriving in Dubai the following morning at 5:35 a.m. (local time) connecting with Emirates’ European destinations, as well as other destinations in West Asia, Africa, and the Middle East.

This flight also connects in both directions with 10 A380 destinations, providing passengers the opportunity to fly all the way from Auckland to Europe on Emirates’ flagship aircraft.

The A380: Emirates’ Flagship Aircraft

The double-decker A380 is the world’s largest commercial aircraft in service and has been very popular with travelers across the globe with its spacious cabins and quiet journeys.

Emirates is the largest operator of the aircraft type and currently has 87 A380s in service and 55 pending delivery. The airline currently operates the A380 to over 45 global destinations. Emirates is also the only company in the world to have a fleet made only with A380 and 777 aircraft since it retired the A330 fleet earlier this year.