A Qantas 787-9 being fueled in front of the carrier’s LAX hangar (Photo: Qantas)

As several airlines across the globe begin accelerating their carbon emission reduction programs, Qantas flight 96 departed on January 28 from Los Angeles to Melbourne, becoming the first dedicated biofuel flight between the U.S. and Australia. It is estimated that the flight will save 18,000 kg of carbon emissions through its ten percent biofuel blend, or the equivalent of using more than 800 new, carbon-absorbing trees over a year, according to the Arbor Environmental Alliance.

The route, which is currently operated by a Boeing 787-9 Dreamliner, was powered by biofuel from Brassica Carinata, a seed developed by Canada-based Agrisoma Biosciences.

“Our partnership with Agrisoma is a big step in the development of a renewable jetfuel industry in Australia,” said Qantas International CEO, Alison Webster. “It is a project we are really proud to be part of as we look at ways to reduce carbon emissions across our operations.” 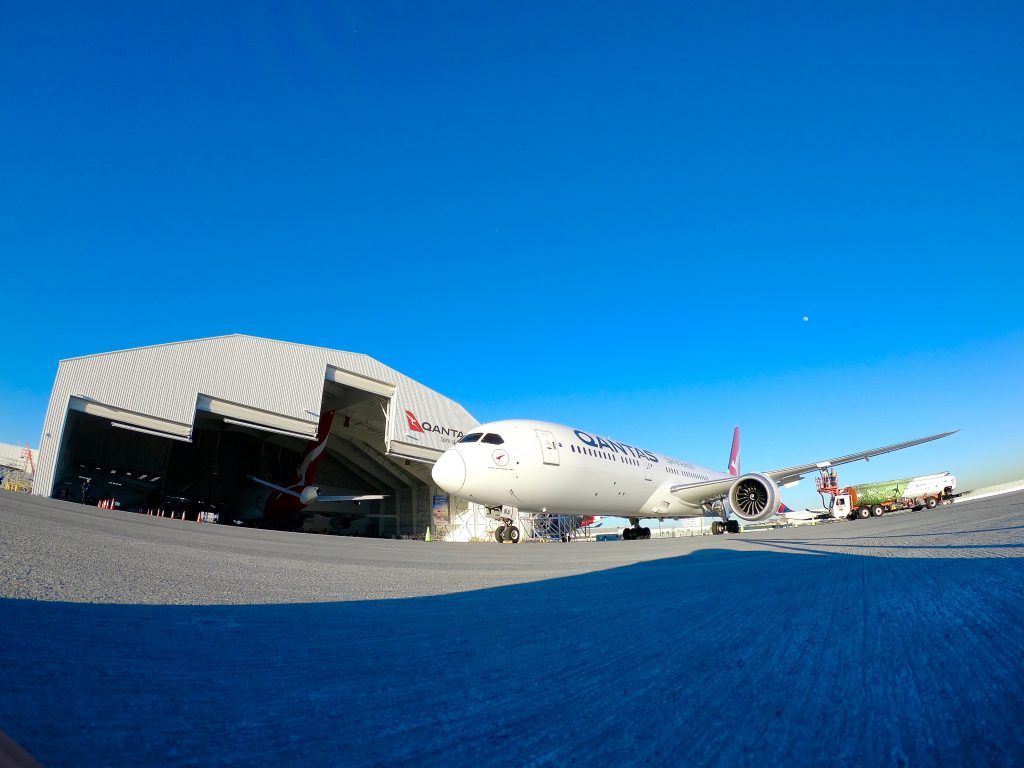 A Qantas 787 in front of the airline’s LAX hangar (Photo: Qantas)

According to the airline, the biofuel blend will result in a seven percent reduction in emissions on the route compared to normal operations, a large step forward for the airline.

With the news, Qantas becomes one of several airlines taking the next steps to reduce their emissions. Hainan Airlines completed its first transcontinental flight powered by biofuel in November of 2017, which was a mix of 15 percent biofuel on its route from Beijing to Chicago. In June of 2016, Alaska Airlines operated two flights using a biofuel blend as well.

It is no surprise that airlines are exploring new ways to reduce their carbon emissions given that they play a significant role in the total carbon emissions across the globe. According to the New York Times, one roundtrip flight between New York and California represents 20 percent of an average car’s emissions in a given year.

The International Air Transport Association (IATA) has set ambitious targets for airlines and aircraft manufacturers, with the goal of improving aircraft fuel efficiency by 1.5 percent per year, every year from 2009 to 2020. In addition, it hopes to reduce net aviation CO2 emissions by 50 percent by 2050. Given these lofty targets, airlines like Qantas will continue to need to find new ways to innovate and improve technology so that aircraft can continue flying for the foreseeable future.