Last week, the 2018 ILA Berlin Air Show returned to the Berlin ExpoCentre Airport, located on the southwest corner of the new, yet to open, Brandenburg Airport. Innovation and Leadership in Aerospace (ILA) saw over 180,000 people visit during the five-day exhibition, which started on Wednesday, April 25 and lasted through Sunday, April 29.

ILA aligns itself closely with the Paris and Farnborough Airshows in being a biennial event with the first three days closed off to the public. This year saw around 200 aircraft present on the ground or in the air along with over 1,000 exhibitors from 41 countries showing off their aviation and aerospace products to the media, potential business customers and, eventually, the public.

Here’s our recap of the biggest news that took place and visitors that attended this year. 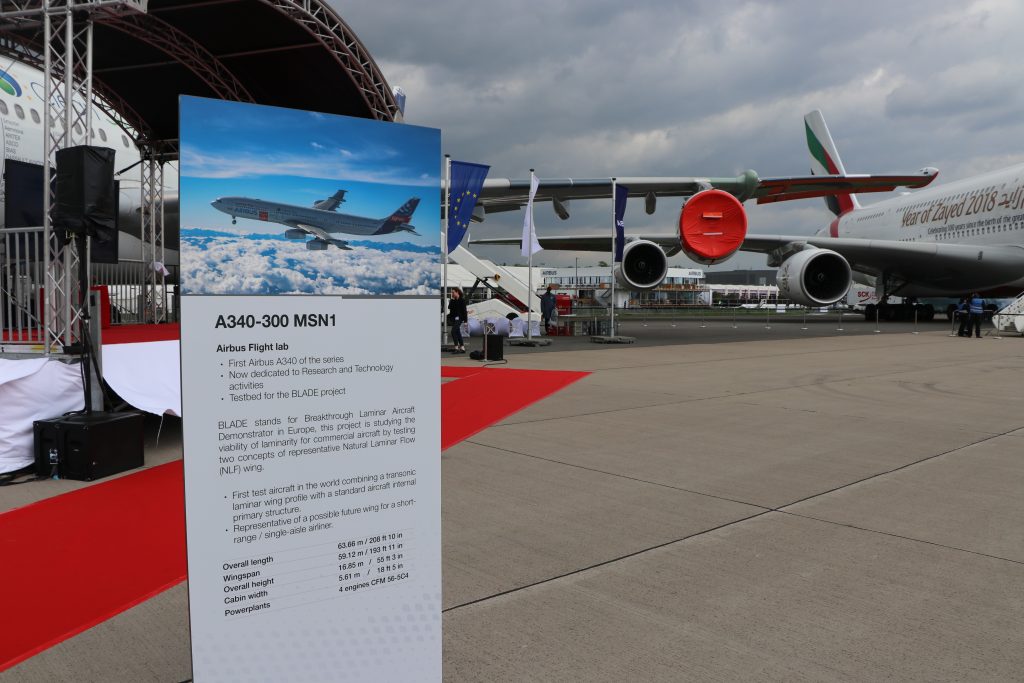 The European manufacturer brought its modified Airbus A340-300 (MSN001) to Berlin, the first time it has visited an airshow, for a ceremony between Airbus and representatives to mark the success of the initiative and further commit their desire to build on the programme.

BLADE, which stands for “Breakthrough Laminar Aircraft Demonstrator in Europe,” is part of the Clean Sky initiative –  a €1.6 billion program that began in 2008. According to Airbus, “BLADE has been tasked with assessing the feasibility of introducing laminar flow wing technology on a large airliner. It aims to improve aviation’s ecological footprint, bringing with it a 10 percent aircraft drag reduction and up to five percent lower CO2 emissions.” 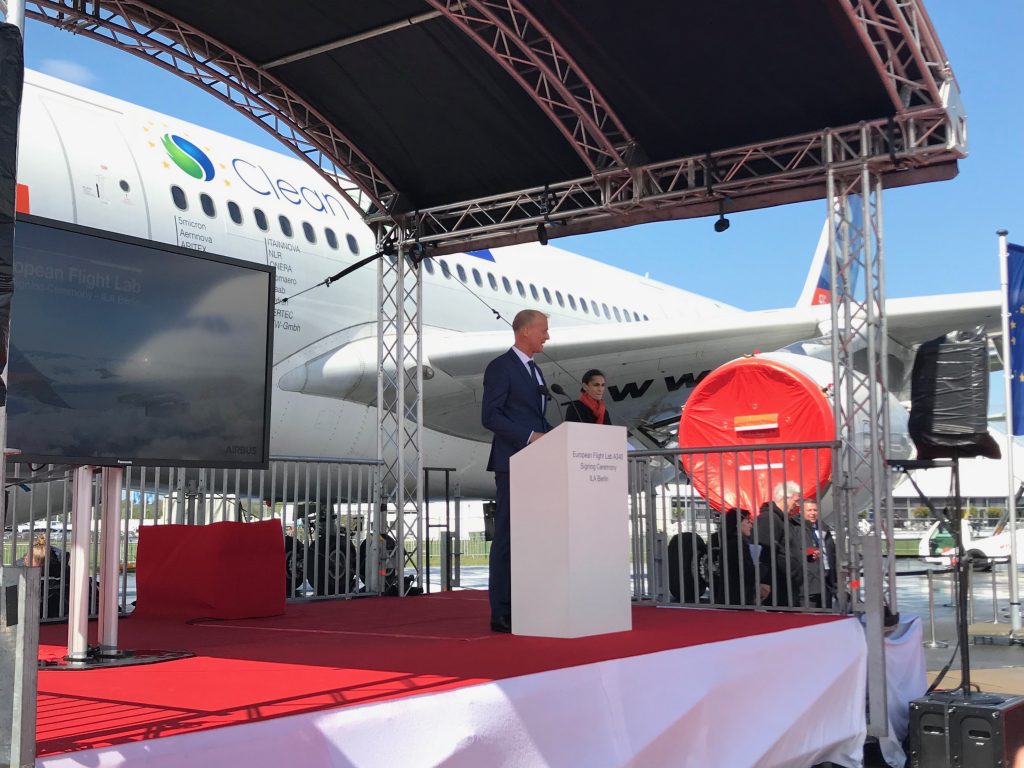 Airbus has already completed under 70 hours of flight testing as part of a 150 flight hour program looking at the laminar flow along the wing.

During the first day, Airbus CEO Mike Enders delivered a speech highlighting the importance of the program to the future aerospace industry to of representatives of the press, European Parliament, the European Commission, the German Government, European Union Member States and industrial partners across Europe.

The Antonov An-225 Drops In 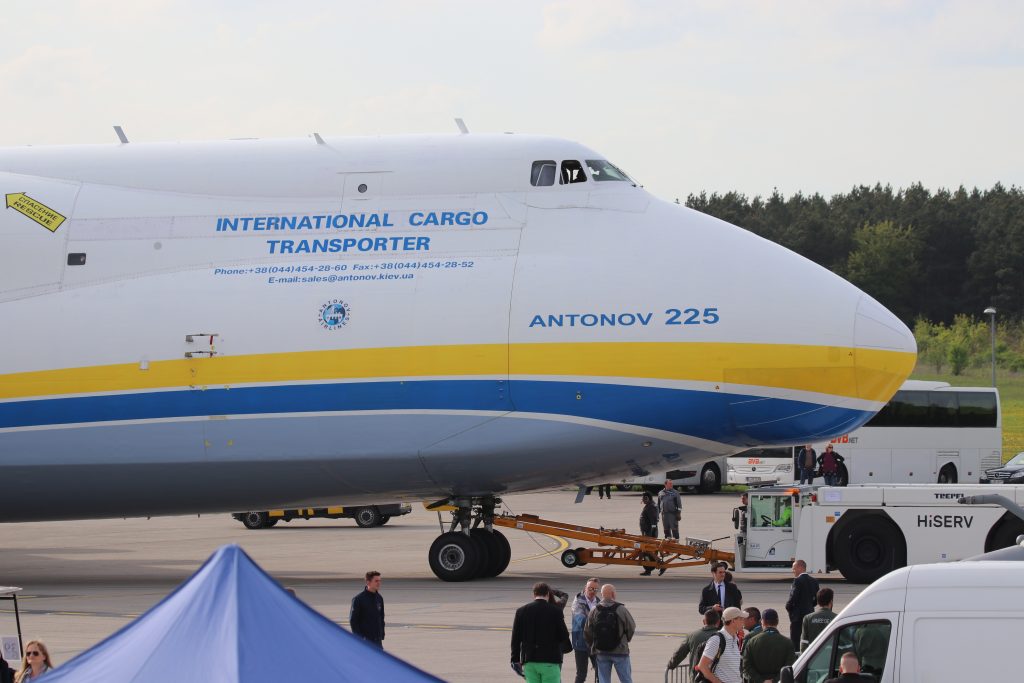 The world’s largest aircraft, the Antonov AN-225 “Mriya,” made a special visit to the German capital this year, spending the duration of the Airshow on the static display line, dwarfing other displays.

Antonov Airlines, the cargo division of Antonov Aviation Company, operates charter flights for oversized international cargo. Its fleet includes one AN-225, with a payload capacity of 250 tonnes, and seven smaller AN-124s, which offer a payload of 150 tonnes.

The aircraft was open to the public to look ‘inside’, as well as the opportunity to visit the flight deck above the cargo area hiding behind the raised nose. 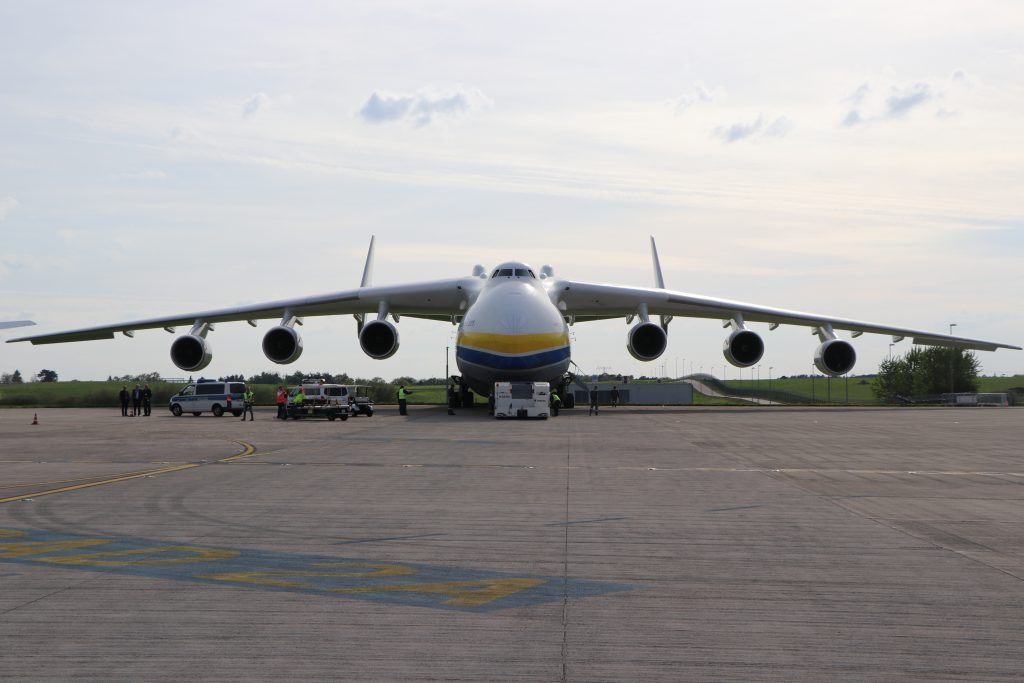 Currently, undergoing a modernization programme, Antonov is investing in its’ future by ensuring it can continue to safely fly outsized and emergency cargo globally, with a rapid turnaround time.

This wasn’t the only supersized aircraft at ILA, as Emirates flew one of it’s surplus Airbus A380s, Airbus brought a Beluga towards the end of the airshow week and the German and U.S. militaries displayed their respective A400ms, C130s and C-17s.

Prior to leaving, the world’s largest aircraft, the AN-225, conducted a flyby, rocking its wings in the classic wave goodbye to the standstill spectators. 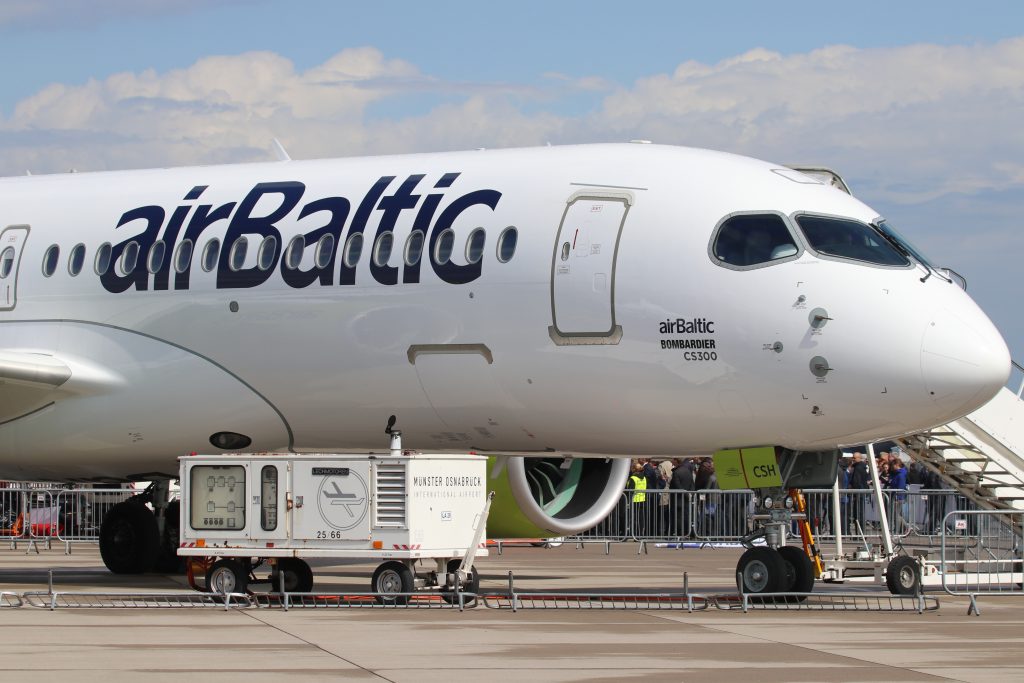 airBaltic, the Latvian state-owned low-cost carrier, displayed one of the eight Bombardier CS300 aircraft it operates to the audience. For two days, the launch customer for the variant was present to business & trade visitors before departing back to Tallin.

Costing $90 million apiece, the 160-seater has 372 orders for the CSeries programme. With the ‘300’ type making up 249 orders, airBaltic will eventually take 20 from the Canadian manufacturer. Korean Air and Swiss also operate the type with currently four out of 10 being operated in Asia and 11 out of 30 being operated by the European flag carrier. 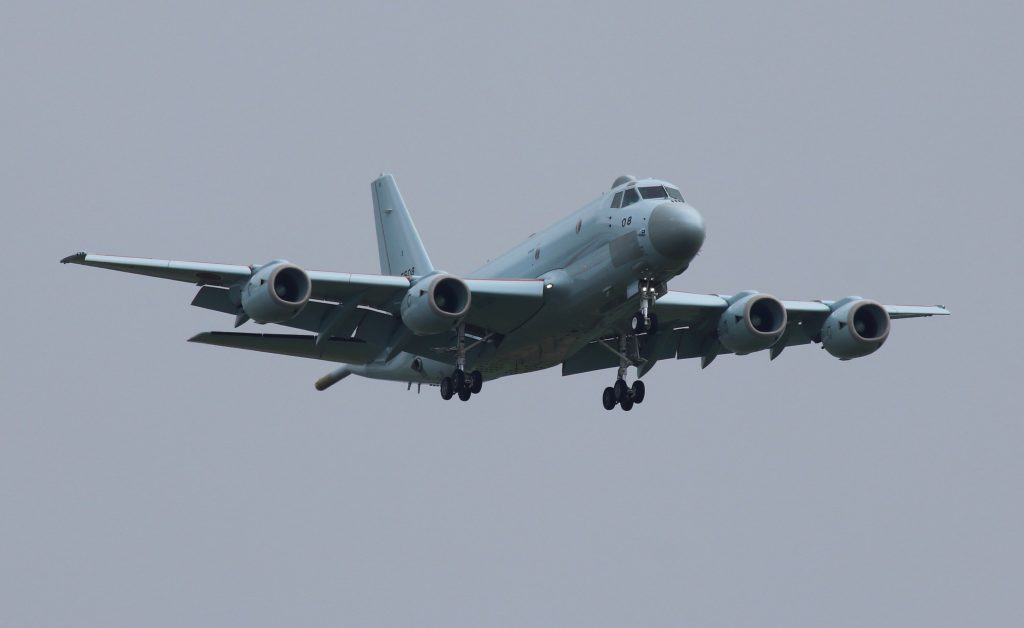 The Japenese Maritime Self-Defence Force brought two of their Kawasaki P-1 aircraft. With one on the ground and one conducting daily flying displays, the Japanese paraded their new maritime aircraft that has locked horns with the Boeing Poseidon P-8 aircraft, with both types being shown interest from various nations around the world.

The JMSDF has more than 80 on order, with 12 currently in service, replacing the outgoing and aging Lockheed P-3 Orion turboprop aircraft.

It wouldn’t be an airshow without something from Airbus flying in the skies above. With what is probably the most elegant looking aircraft in the fleet, the European manufacturer sent an Airbus A350-900, F-WWCF, to show the German population why Lufthansa will have 25 of the type operating out of Munich. 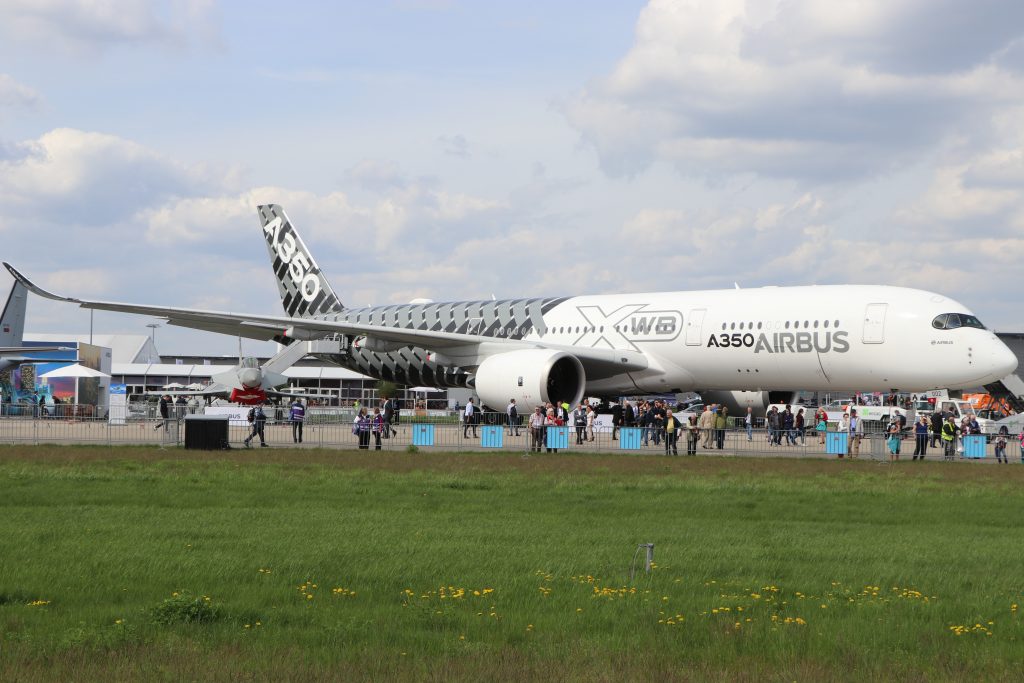 The Airbus A350-900 being towed back onto the static display line following its flight (Photo: AirlineGeeks | James Dinsdale)

Parked up next to its big sister, the Airbus A380, the rival to the Dreamliner underwent daily displays before returning to the display line, allowing spectators to get up close and personal whilst being towed.

Of the 854 orders Airbus has received for the type, the -900 variant takes the majority of bookings with 686 total order, with Singapore taking the most of any airline with 67 orders.

The Patrulla Águila was the sole display team present at the airshow. Flying Casa C-101 Aviojets in a neat seven-ship display, the Spanish showcased an effortless, dynamic display wowing the crowds every day. Based at San Javier Air Base, Murcia, 12 C-101s are at the Spanish’s disposal to spray their famous yellow smoke, the only team to do so. 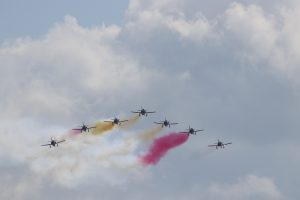 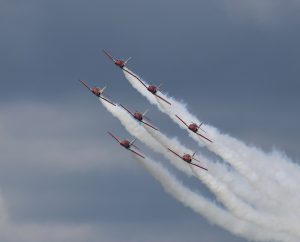 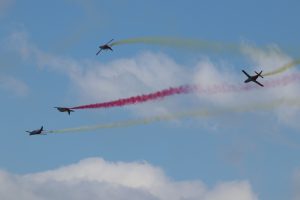 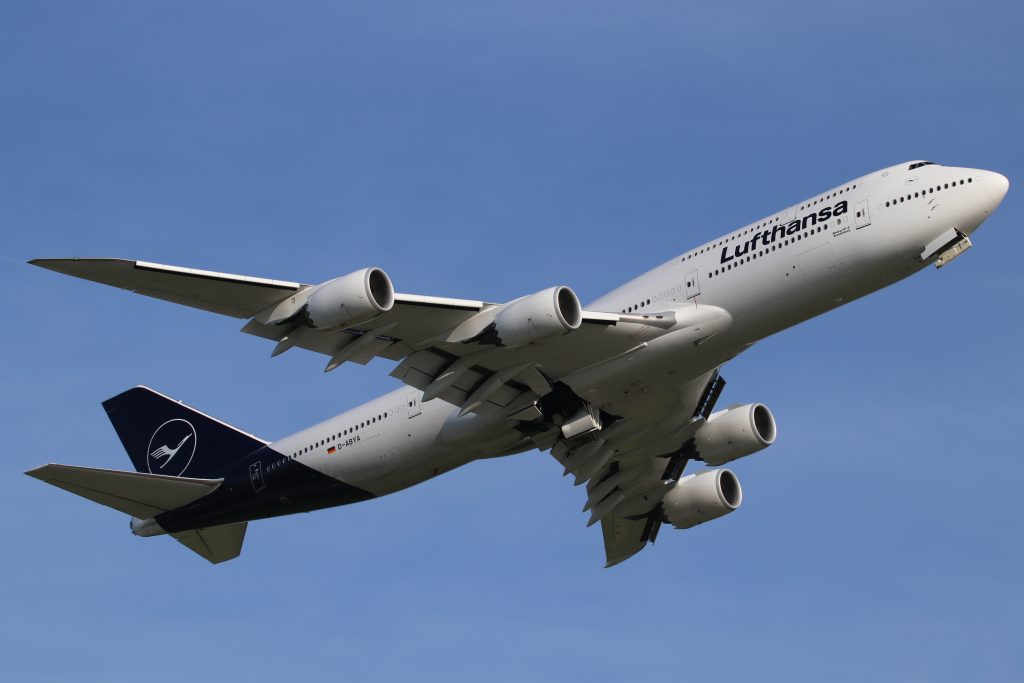 When an airshow is in your backyard, its hard to not bring an airliner to your target audience, and Lufthansa jumped at the chance of being in view of 150,000 spectators.

Following the livery change earlier in the year, the German flag-carrier brought a re-painted Boeing 747-400, D-AYBA, to spend the afternoon in the sun.

The aircraft is nicknamed ‘Brandenburg’, the namesake of the state that surrounds Berlin and the name of the new airport. Brandenburg sat patiently near the hold point of the runway throughout Saturday before departing in the back to Frankfurt after the day’s display programme.

The show was a very impressive event to kick off the airshow season, both in terms of aircraft on display on the ground and in the air. There was a healthy mix of helicopters, general aviation, military and fighter jet aircraft to meet all needs.

One benefit of it being a German airshow is the proximity it has to American military bases. The United States has aircraft based at NATO bases Geilenkirchen and Spangdahlem, as well as Ramstein Air Base, giving them a great chance to get their air power out on show to the public.

However, one small question looking into the future is what will happen to ILA Berlin in 2020? By that point, Brandenburg Airport may have opened and the combined closure of Tegal and Schonefeld will have inevitably taken place.

There are two runways at Brandenburg/Schonefeld airport. The North runway is currently active as the operational runway for Berlin’s southern airport. To the South is the newer runway, built along with the new Brandenburg terminal and is the where the airshow is hosted, which is officially closed to civilian operations throughout the year.

Once the traffic from Tegal and Schonefeld is combined under the one airport of Brandenburg, two active runways for arrivals and departures are expected to be needed. While the show will inevitably go on, one wonders what the plans are for the future.

Dallas-based carrier American Airlines announced on Tuesday that it had finally begun to receive Boeing 787s roughly 14 months after the FAA had suspended Boeing’s Charleston, South Carolina plant from delivering the type. The FAA had put a halt to Boeing’s 787 operations following alarming information on the manufacturer's inspection…