Cathay Pacific Takes Delivery of its First Airbus A350-1000

Cathay Pacific took delivery this morning of its first Airbus A350-1000 aircraft at the Airbus Delivery Centre in Toulouse, France. The Hong Kong-based airline is just the second airline to receive the new fuel-efficient airliner, Airbus’ newest widebody aircraft, following Qatar Airways, which took delivery of the aircraft in February and flew it to Doha with AirlineGeeks onboard.

After taking delivery of the aircraft, Cathay flew the aircraft home to Hong Kong International Airport as CX3510. While the aircraft is already more fuel efficient than some of its long-haul counterparts in the Cathay fleet thanks to its Trent XWB engines, the A350-1000 has another eco-friendly aspect that offsets its environmental impact on its 11-hour flight to Hong Kong, the use of biofuel blend, a cost and fuel-saving alternative to standard jet fuel.

Already operating the A350-900 variant of the A350 family, the A350-1000 is a gamechanger for the airline, as it will open up new non-stop destinations and replace existing aircraft on routes from Hong Kong to destinations in North America and Europe. One of the most anticipated is the new route between Hong Kong and Washington-Dulles beginning in September. When that route starts, it will be the longest in the Cathay route network at over 8,000 nautical miles.

“We already have one of the youngest long-haul fleets in the sky, and with the arrival of the A350-1000, our fleet is only going to get younger,” said Cathay Pacific Chief Customer and Commercial Officer Paul Loo. “The aircraft follows the successful entry of the -900 variant which has enabled us to expand our long-haul network at a near-unprecedented rate, providing our customers with a wider range of non-stop travel choices, while at the same time strengthening Hong Kong’s position as Asia’s largest international aviation hub.”

“The -1000 is very similar to the -900 in terms of its operational excellence. It has an incredible range, is remarkably fuel efficient and quiet, provides customers with an unsurpassed cabin environment and has extremely attractive operating economics,” said Loo. 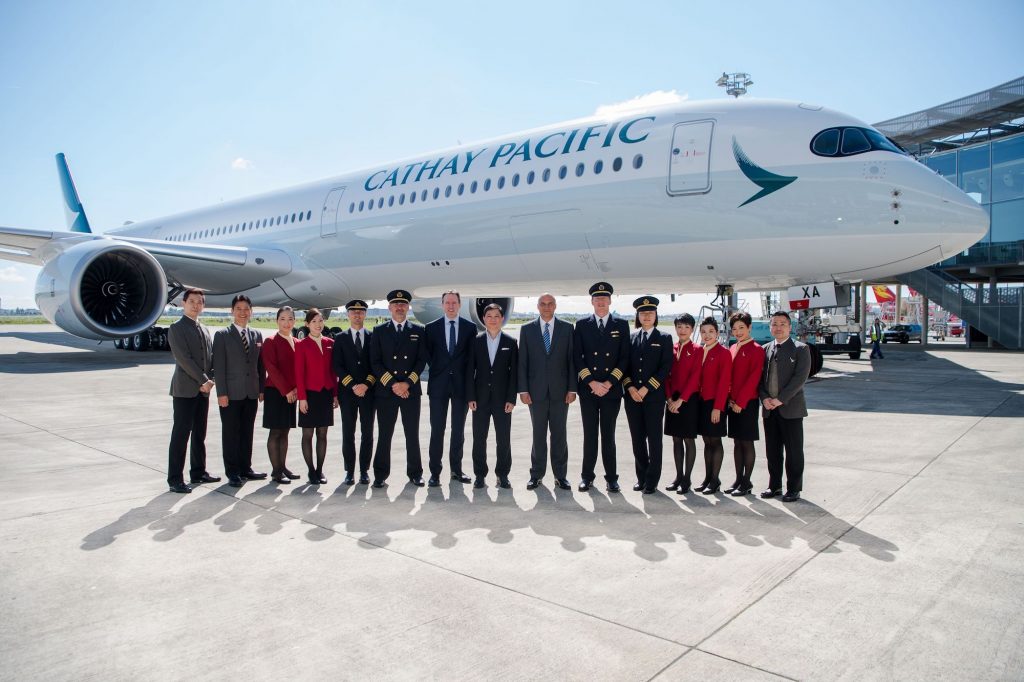 Cathay Pacific team members celebrate the delivery of the first A350-1000 to the airline. (Photo: Airbus)

Initially, the aircraft will fly proving flight throughout the Far East starting July 1 on the Hong Kong-Taipei route for the purposes of crew training and familiarization. Once the summer is over, the aircraft will be assigned to its more permanent routes, beginning with Washington, D.C. on Sep. 15. As the airline receives the rest of its 20 orders, the A350-1000 will begin to replace Cathay’s existing long-haul fleet on routes to secondary cities in Europe and Asia such as Zurich, Tel Aviv, Madrid and Manchester.

The aircraft is configured in a 3-class configuration consisting of 46 business class seats, 32 premium economy seats and 256 economy seats for a total of 334 seats. Thanks to its longer fuselage, the aircraft can seat 54 more passengers than its sister aircraft, the A350-900. The new aircraft also touts a revised premium economy cabin, as well as enhanced WiFi connectivity for its passengers, both important for the long-haul flights Cathay is planning on using the aircraft for.

“Like the A350-900, this aircraft delivers an enormous 25 percent improvement in fuel efficiency compared to the previous generation of aircraft,” said Airbus CCO Eric Schulz. “But the A350-100 has 54 more seats in Cathay Pacific’s 3-class layout.”

The Airbus A350 is going head to head with the Boeing 787 Dreamliner, as both are the newest single-level, fuel-efficient aircraft roaming the skies, and flying some of the world’s longest routes. While the Dreamliner currently has the top spot, flying Perth to London for Qantas, the A350 will regain the honor of flying the longest route in the world when it resumes Singapore to Newark on the A350ULR for Singapore Airlines in October.