Arizona is a popular destination for retirees due to its consistent hot temperatures and idyllic, picturesque scenery. However, the latest retiree to change its residency to Arizona wouldn’t be a 65-year old senior citizen, but rather a Boeing 777-200 aircraft as Hong Kong-based Cathay Pacific announced on Monday that it would be donating the newly-retired first-ever Boeing 777 to the Pima Air and Space Museum in Tucson, Ariz. and flew it to its new home on Tuesday.

The 24-year-old aircraft bears the manufacturer serial number (MSN) 001. B-HNL is the first of over a thousand 777 aircraft that have been delivered to different operators around the world.

“Cathay Pacific has been instrumental in the tremendous success of the 777 program. The airline contributed greatly to the airplane’s original design and has been one of its biggest ambassadors ever since. And now they are a launch customer for our new 777X airplane. We are thrilled to partner with Cathay on this donation to the museum as a way to share the remarkable story of the Boeing 777 for years come,” said Boeing Commercial Airplanes President and CEO Kevin McAllister.

B-HNL is towed over to the museum by Air Force Teams (Photo: AirlineGeeks | Ryan Ewing)

United was the first carrier to put the 777 into revenue service in October 1995 with N777UA. In 1990, the Chicago-based airline was also the first to have orders for the 777 in the books. However, Cathay Pacific held the keys to the very first 777 aircraft for approximately 18 years when it acquired the aircraft in 2000.

“As the world’s very first 777, B-HNL holds a very special place in history for both our airline and that of commercial aviation, and we are very pleased it will soon bring enjoyment to enthusiasts at its new home in Arizona,” said Rupert Hogg, CEO of Cathay Pacific. 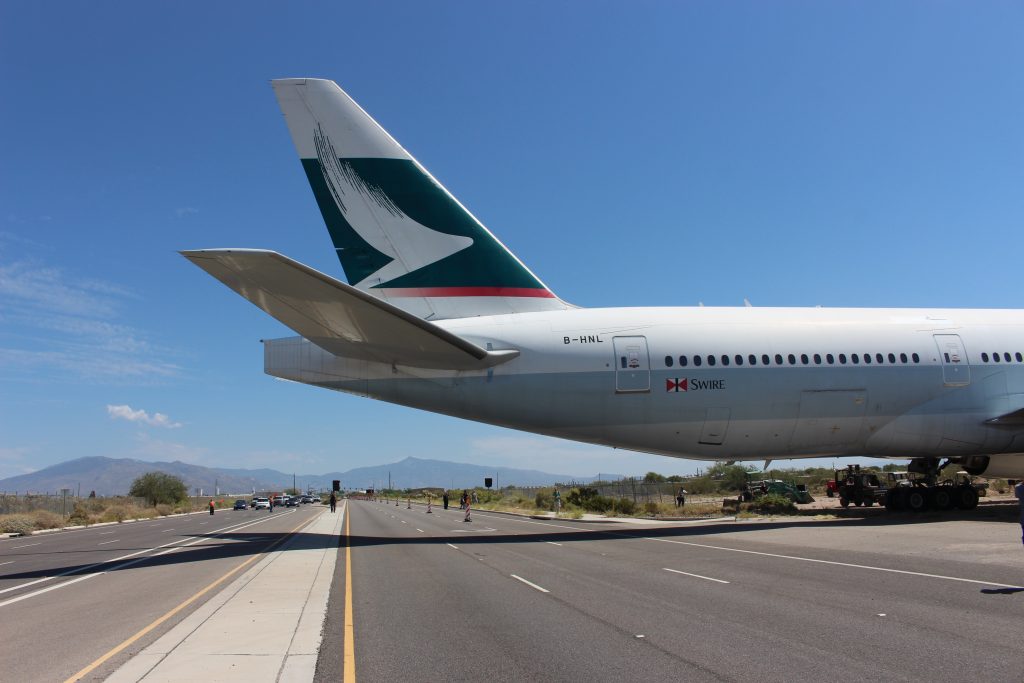 B-HNL flew from its former home in Hong Kong to its new home in Tucson, Ariz. on Sept. 18, 2018. The flight itself lasted just under 14 hours, flying straight into Davis-Monthan Air Force Base which is adjacent to the museum as well as a large military aircraft boneyard.

The Pima Air and Space Museum is famous for its wide array of aircraft on display. In addition to scores of military aircraft, the museum holds several civilian aircraft in its possession, including a Boeing 787-8 Dreamliner, Orbis DC-10, TWA Lockheed Constellation, and a China Southern 737. Naturally, the addition of a new aircraft put smiles on the faces of the museum staff, including James Stemm, who was on site as the aircraft was towed over from the nearby air force base. 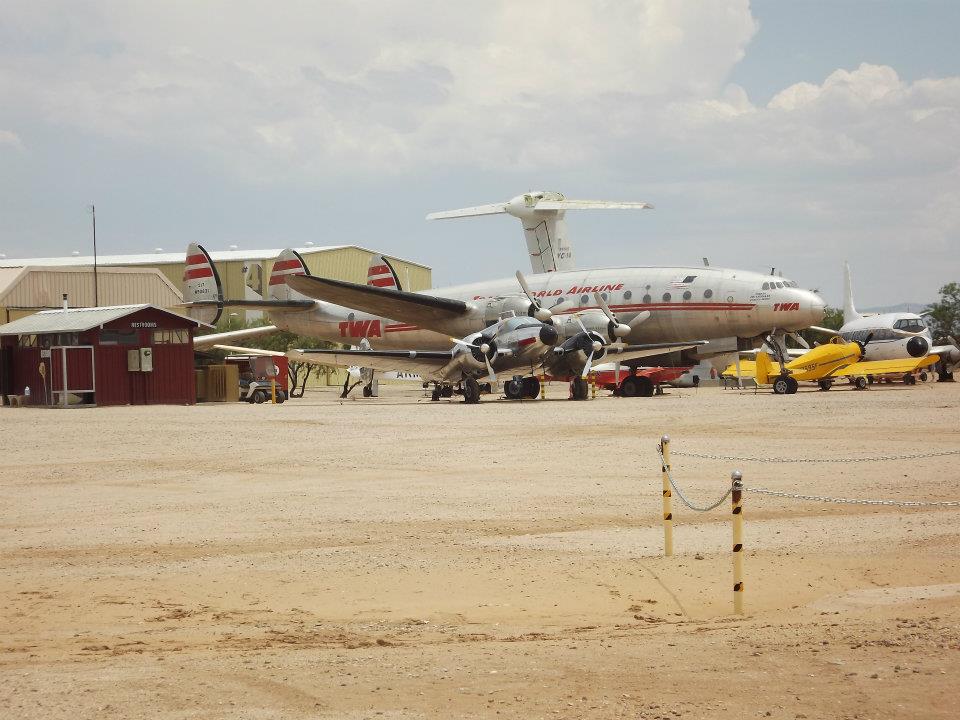 “It’s really a great addition to the collection because it is the first 777 built, it’s a major advance in aviation technology from the 1990s and we are really happy to have it,” said Stemm. 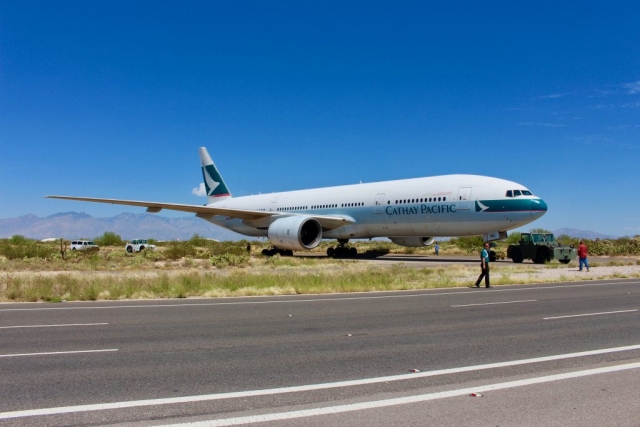 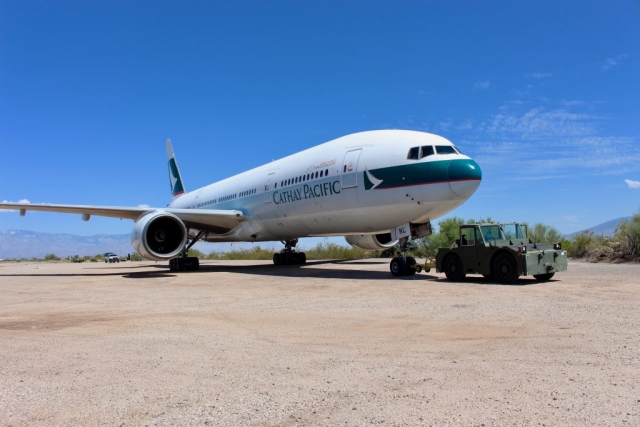 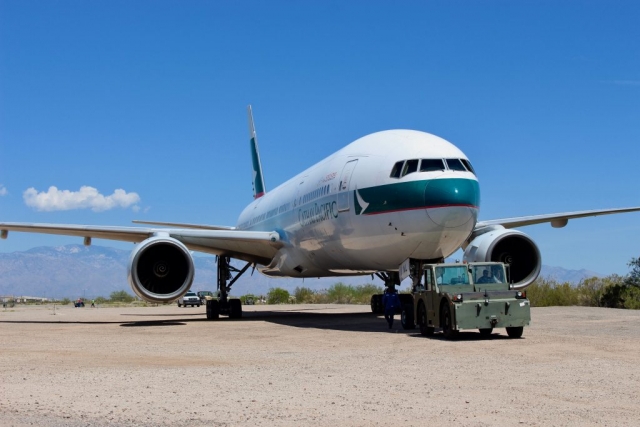 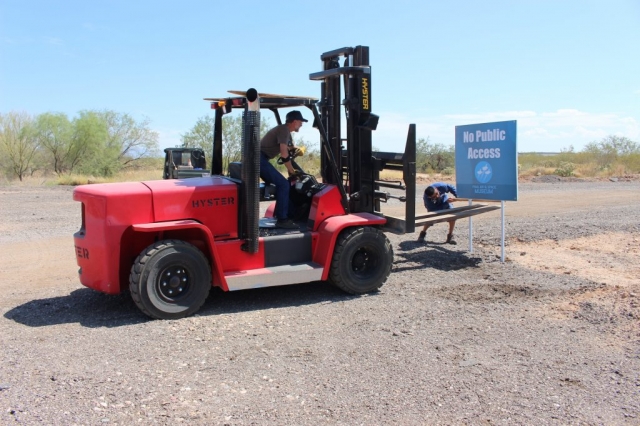 B-HNL departed Hong Kong just after 12:20 p.m., arriving in Southern Arizona at 11:14 a.m. After landing at Davis-Monthan, the four-person crew was met by U.S. Customs and Border Protection before the aircraft was towed across the street to the museum.

When the airplane arrived, dozens of adoring fans were waiting for it to be towed across Valencia Road into the museum complex. As museum teams towed the airplane out of the base, traffic was stopped on the busy street to ensure a safe crossing. The street is built for this occasion, with reduced medians and wide gates. 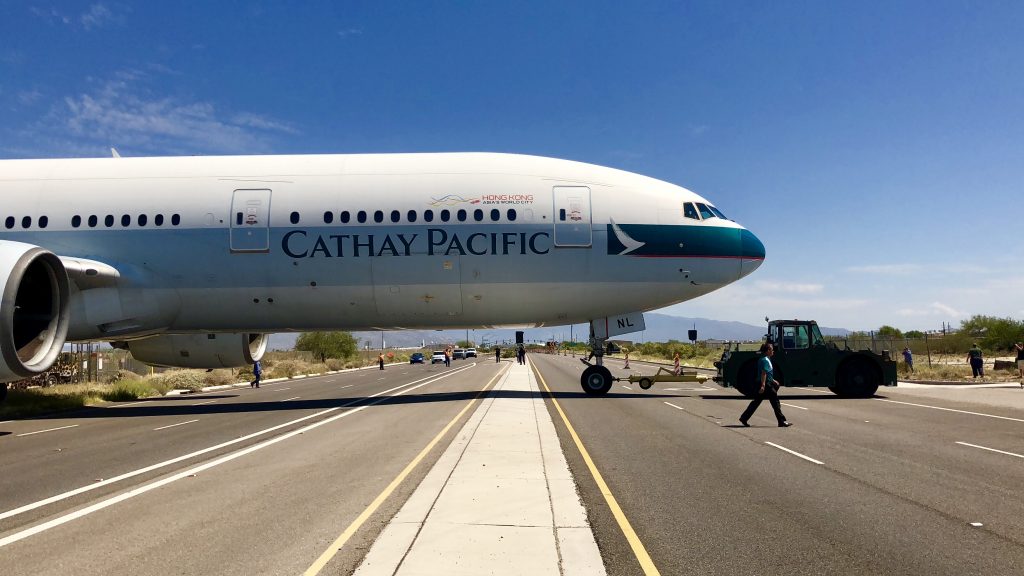 It took less than an hour to reposition the aircraft to the museum, despite a few signs in the way. Museum teams were carefully watching the airplane’s every move to ensure that no damage would be sustained afterward.

The 777 was brought inside the museum’s inclosed restoration area where the auxiliary power unit (APU) was powered down for one last time. 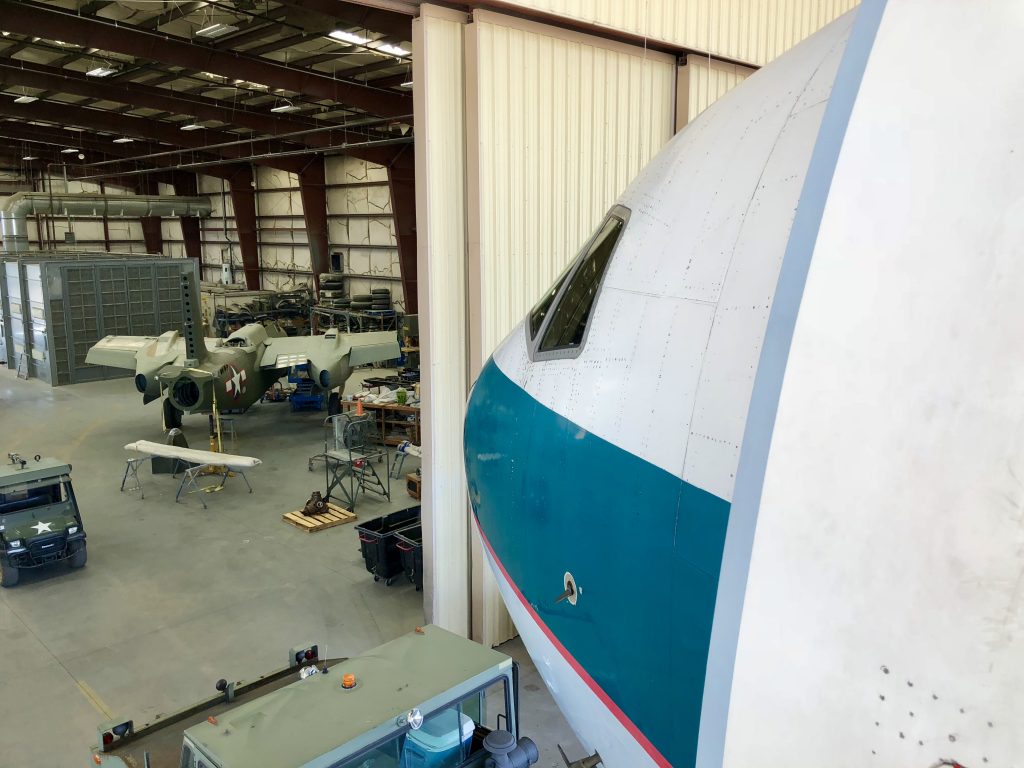 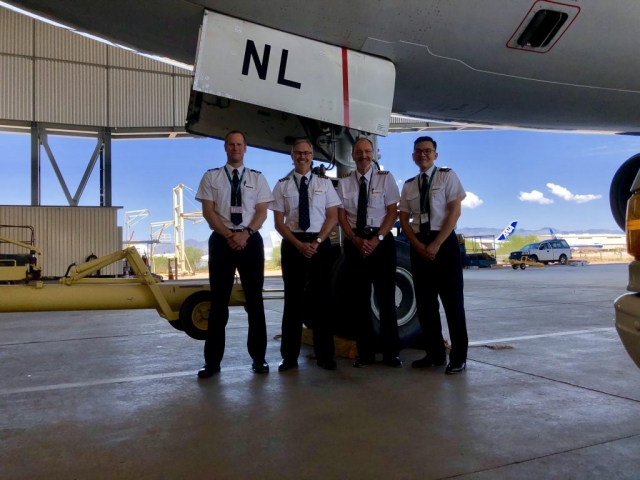 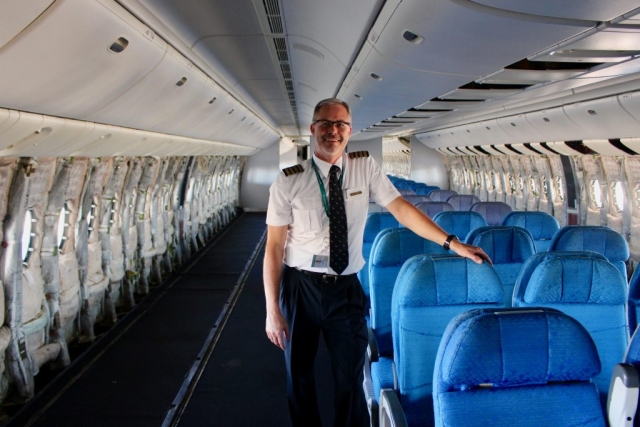 Inside the airplane was nothing but a handful of center-aisle seats. The airline had sent the 777-200 to Xiamen, China to be nearly gutted back in June. The remnants of the jet’s interior were small compared to what most are used to today. 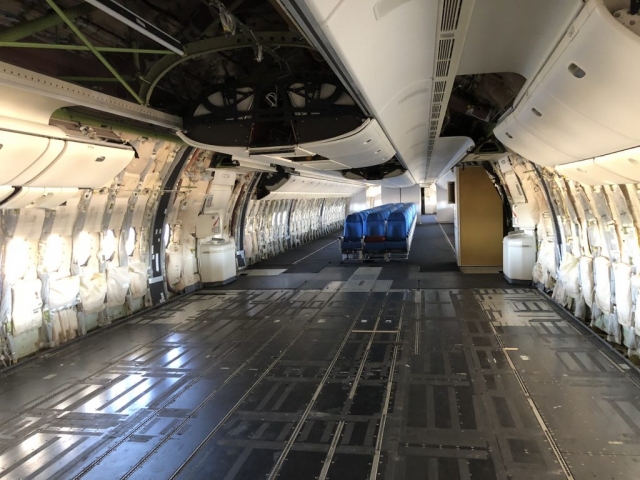 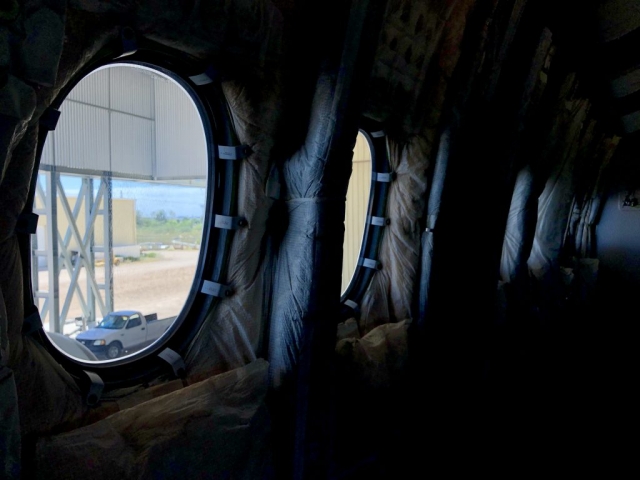 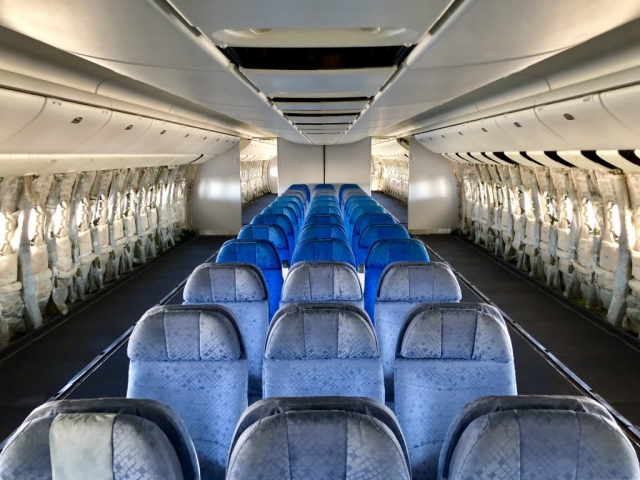 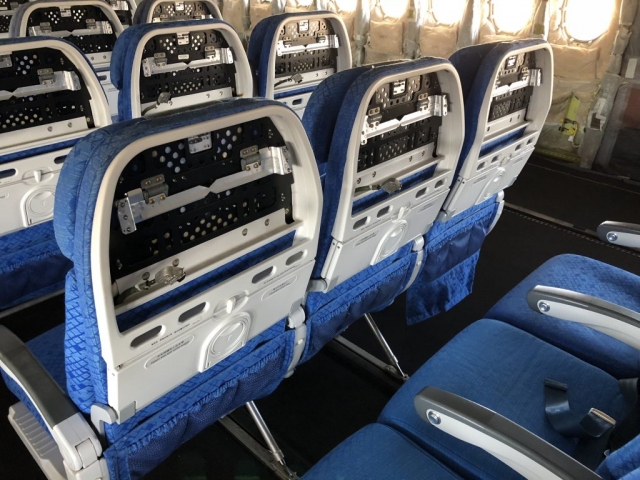 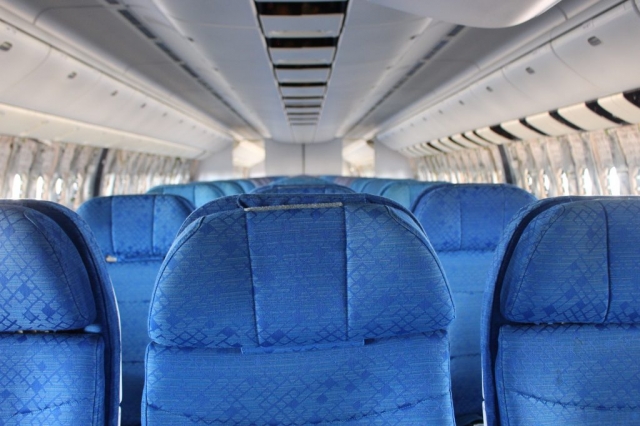 B-HNL’s retirement at the Pima Air and Space Museum is a huge step in preserving an iconic piece of aviation history. While the newly-repatriated aircraft may not be the first 777 to be retired, it is the first to find rest in a museum.

This story was updated on Sept. 18, 2018 at 11:10 p.m. ET. Local police did not stop traffic, rather museum staff did. Also, museum staff towed the aircraft, not U.S. Air Force personnel.

Follow Ryan
Ryan Ewing
Ryan founded AirlineGeeks.com back in February 2013 and has amassed considerable experience in the aviation sector. His work has been featured in several publications and news outlets, including CNN, WJLA, CNET, and Business Insider. During his time in the industry, he's worked in roles pertaining to airport operations and customer service while holding a B.S. in Air Transportation Management from Arizona State University along with pursuing a concurrent MBA and law program. Ryan has experience in several facets of the industry from behind the yoke of a Cessna 172 to interviewing airline industry executives. In addition to supporting AirlineGeeks, Ryan works full-time in the aviation industry.
Follow Ryan
Latest posts by Ryan Ewing (see all)
777arizonaBoeingcathayCathay PacificFeaturedfirstmusuemPacificRetirement
Related Stories
[ Related Stories ]January 10, 2023 6:00 am ET
By Victor Shalton