The baggage claim rings out to the tune of the University of Missouri’s “Every True Son” and “Fight Tiger” as nearly 150 passengers from American Airlines Flight 5766 and United Airlines Flight 4407 wait in the narrow hallways of Columbia Regional Airport for their bags. Across the terminal, 136 passengers start the boarding process as they prepare to take their regional jet to either Dallas and Chicago. The airport is crowded on that side too but relief for the mid-Missouri traveler has been a lengthy process with no firm date on a new, more spacious terminal in sight.

But the airport hasn’t always been that successful. Flashback to 2009 and the airport had different issues that were plaguing the now highly successful small airfield. The mid-Missouri airport had been a part of the Essential Air Service program as airlines like Trans World Airlines, Ozark Airlines and US Airways had come and gone in the early to mid-2000s with little success connecting COU to cities like St. Louis, Chicago O’Hare, Dallas-Ft. Worth and Kansas City. The airport eventually landed Northwest Airlines operating Mesaba Airlines Saab 340s to Memphis in 2008. This service would eventually lead to Delta Air Lines service to Memphis after the airline took over Northwest in 2009.

During the airport’s 2009 master plan, the airport mentions that the terminal is aging at nearly 40 years old and should start looking for renovating the older structure to bring the structure into the next generation. The master plan prioritized renovating and expanding taxiways and runways at COU while also looking to add more hangar space. However, the arrival of larger aircraft later changed that tune. 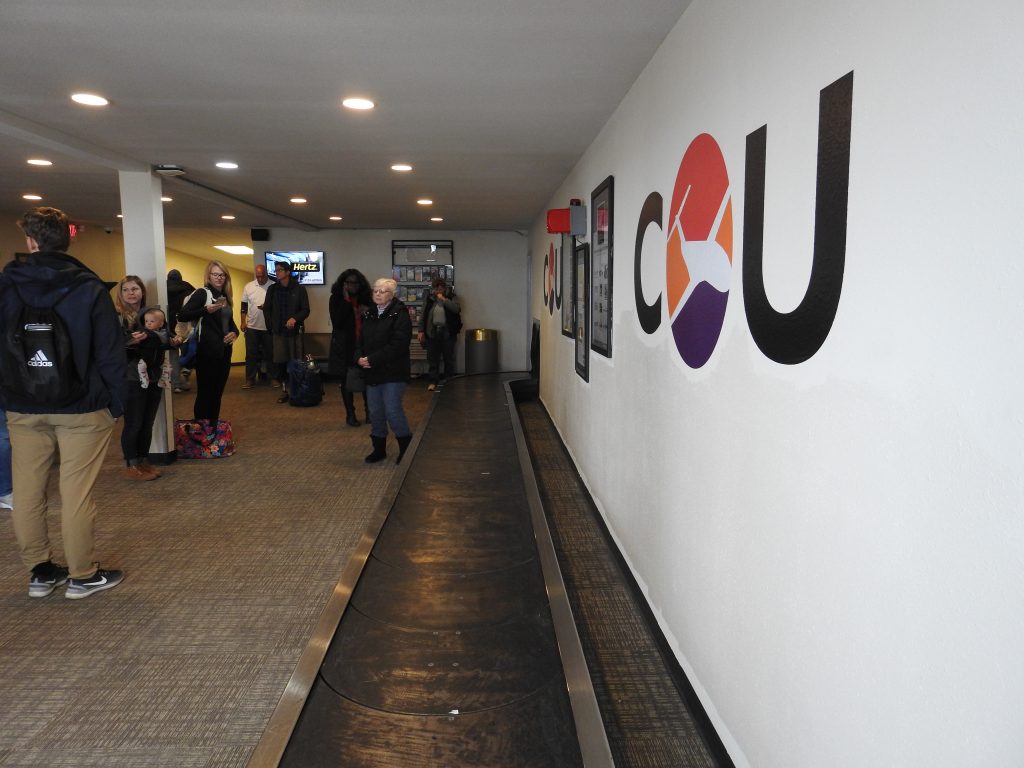 In 2010, Delta opted to not renew the EAS for Columbia citing that the airport was well above the expectations for the program and that the airline would expand to Bombardier CRJ-200s. The airline would also add Atlanta after pressure for the city. The airport’s expansion plans reflected the city’s goal for a new terminal with the 2011 master plan calling for a new four-gate terminal on the northeast end of the airfield.

In 2012, Frontier Airlines announced they would add service to Columbia from their expanding hub in Orlando. This was an issue for the airport as Frontier’s 138-seat Airbus A319s stretched the terminal’s small capacity and showed the issues that plagued the 1960s built terminal. The airport would separate the baggage claim and departure lounge with the addition of a ex-Columbia Public Schools double-wide trailer on the southern end of the existing structure housing the new baggage claim.

Although Frontier and Delta had left in 2013, the arrival of American Airlines and the rumors of Allegiant coming continued the talk of a new terminal and the need for a terminal for the expanding town of Columbia. The airport started to look into financing the terminal with the Federal Aviation Administration expected to fund 50 percent of the construction project but the city or state would be responsible for the other 50 percent. Talks of moving the hotel tax in town from 4 percent to 7 percent was offered but shot down in fears that it would damage Columbia’s tourism too much. The city also considered adding a parking fee but fears that the cost would drive people to prioritize St. Louis or Kansas City forced the airport to withdraw that idea. With no clear way to fund the expensive northeast plan, the airport started analyzing cheaper alternatives to the airfield.

By 2015 the airport came forth with the new alternatives with a $38 million northwest plan being floated as well as rebuilding the terminal just south of the existing structure for a cheaper $30 million. The city originally chose the northwest plan due to its ability to expand but eventually settled for the southern structure due to the cheaper cost.

As for funding, the city allowed the citizens to decide if a hotel tax increase would be suitable to start funding the airport. The tax would be voted on in the 2016 ballot as the City of Columbia’s Proposition 1 calling for a one percent increase on the hotel tax for funding of the terminal project. The tax was fought hard by the Columbia Hospitality Association (CHA), who claimed the tax would damage the city’s ability to market itself as a destination.

Despite the CHA saying that local users should fund the airport, Proposition 1 passed the vote and gave a life of 23 years or until $10 million was accumulated. As of the writing of this article, Columbia Regional Airport reports that $1.1 million as been made from the tax increase. The airport and city hope that the state will also step in and help fund the terminal instead of the city alone getting the funding for the airport.

While funding is continuing to accumulate, the city has gone forward with taxiway and runway renovations with runway 13/31 being expanded to 5,500 feet and widened from 75 feet to 100 feet wide. This expansion will now allow Columbia’s commercial operations to use runway 13/31 while a repave and expansion of runway 02/20 will begin. COU has also expanded parking since the original 275 parking spaces are not viewed as enough with the airport reaching 100,000 travelers per year. Inside the terminal, the second-floor restaurant has been removed in favor of more landside seating. Furthermore, Columbia also plans to add an additional TSA screening line in the terminal to allow for the morning 6 a.m. and afternoon 2 p.m. crowds to transition through the airport easier and reduce the backlog that can occur around the main entrance to the building.

While the airport funding is underway, the commercial airline presence is continuing to strain the existing structure. United launched flights to Columbia in 2017 while American was also expanding its presence with 50-seat jets being upgraded to Bombardier CRJ-700s and CRJ-900s.

The current plan calls for the terminal to be completed by 2023 but with delays pushing the terminal originally from 2020 to 2023, the airport isn’t committing to making the new date. However, with $15 million already spent over the last ten years to keep the airport going and the airport continuing to see expansion, the question of how much longer can the 50-year-old terminal continue to keep going becomes more and more concerning for the airport and it’s users.