The TWA Hotel at JFK Airport is the only on-airport hotel that has became a popular hang-out spot for travelers and aviation enthusiasts alike. (Photo: AirlineGeeks | Shaquille Khan)

The long-awaited TWA Hotel on the grounds of New York’s John F. Kennedy International finally opened on Tuesday. It is the culmination of an ambitious project to bring the landmarked but hitherto dormant TWA terminal into use as a hotel, the only one of its kind at New York’s main airport.

MCR Development, the developers of the city’s newest hotel, had a singular plan; they wanted to bring back the terminal to the glory days of TWA.  Apart from licensing the branding rights to make a TWA-themed hotel, MCR has gathered a vast amount of artifacts such as uniforms, posters, signage, and more to turn the place into essentially a museum as well. 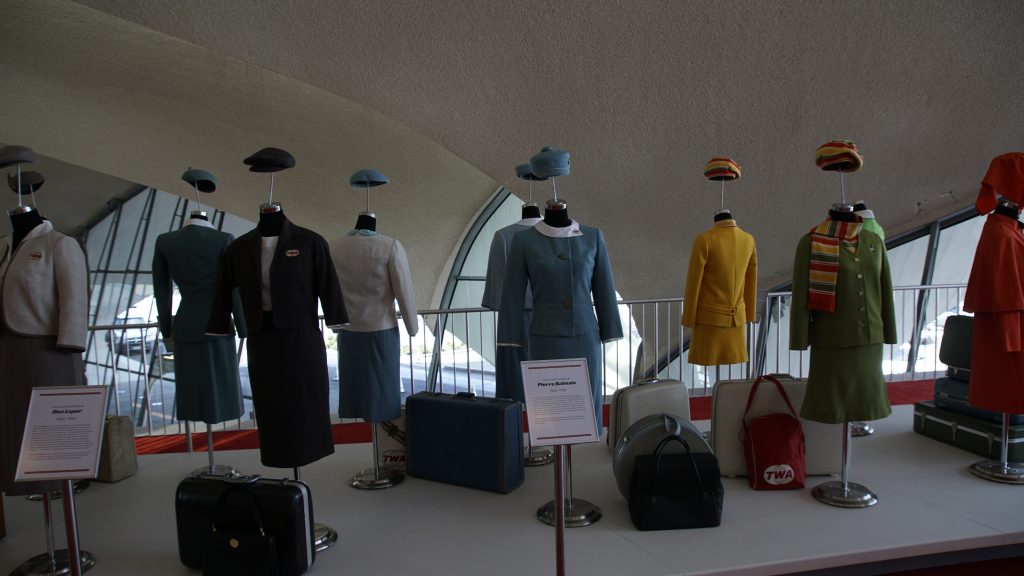 While the building was under construction, the firm housed many of the treasures at another modern marvel, the Freedom Tower. On the southeast facing corner of the tower for the past few years was the TWA Lounge, a sales office for the hotel that doubled as the occasional event space, as AirlineGeeks found out when it hosted an aviation enthusiast meet up there last year.

What was once a bustling terminal for Trans World Airlines is now the hotel’s lobby and common area. Guests can check in at the same counters that were originally used to check in passengers for TWA up until the terminal’s closure in the early 2000s. Check-in is mostly electronic and performed on touchscreens at the counters. 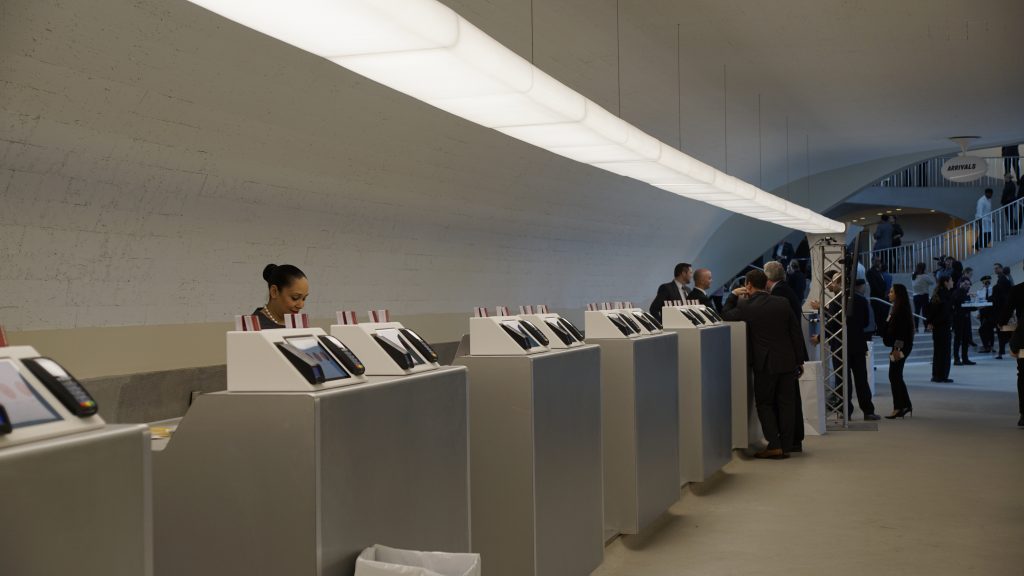 After check-in guests can enter the vast lobby that is a masterpiece of the late architect Eero Saarinen that also houses the famous Sunken Lounge and large Solari board. On each side of the lounge, there are tubes that guests can use to access the guest rooms, as seen in the movie Catch Me If You Can where Tom Hanks’ character confronts Frank Abignale Jr., played by Leonardo di Caprio. 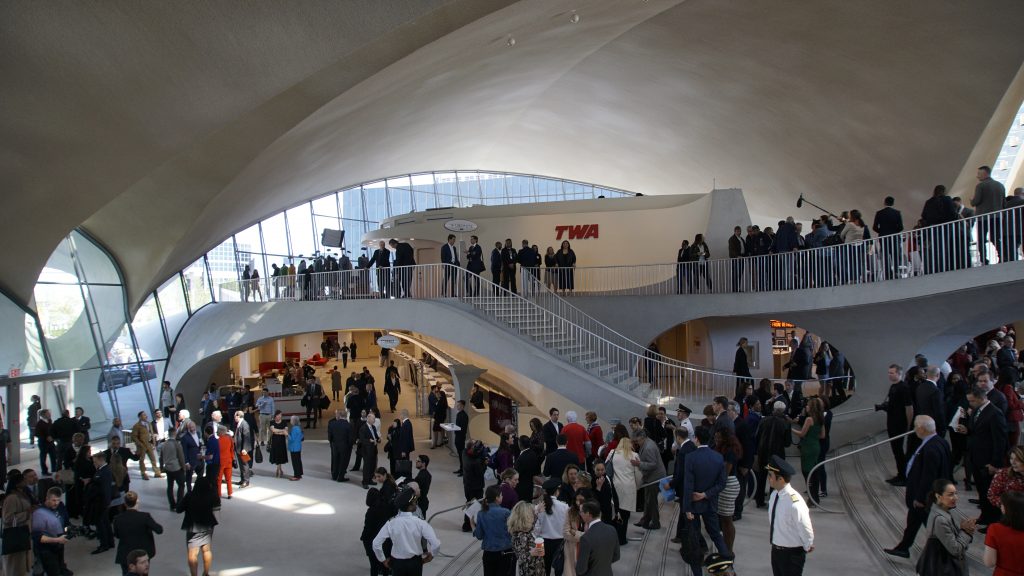 Beyond the main terminal lobby, the hotel sports over 500 rooms located across two buildings in two separate wings. Many of these rooms are runway view and paneled with thick glass to ensure a quiet experience even when the loudest of planes may be passing by.

While the terminal used to bring its guests to the world, the world is now brought to its passengers through cuisine. The Paris Cafe is a full-service restaurant located on the upper level next to the Lisbon Lounge, which serves cocktails. The upper level also houses a display of historical TWA uniforms and other relics where the TWA Royal Ambassadors Club used to be.

Then comes Connie, the Lockheed Constellation aircraft that the hotel operators brought in to use a bar. The aircraft is placed in an open area between the two guest room wings and in between JetBlue’s Terminal 5 and the hotel. The iconic aircraft, utilized by TWA in the post-war era, was trucked in by MCR from Maine following the aircraft’s illustrious journey. 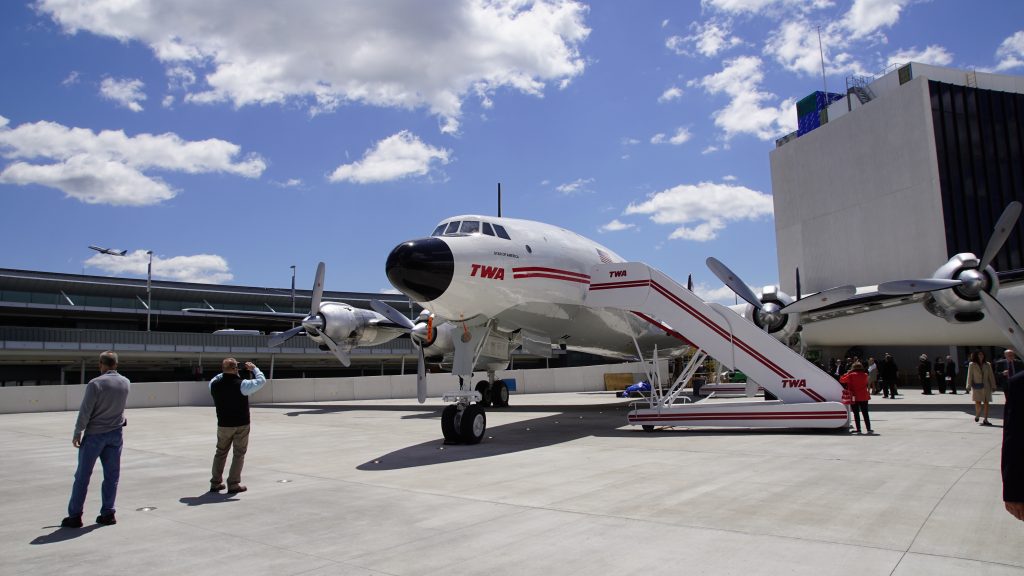 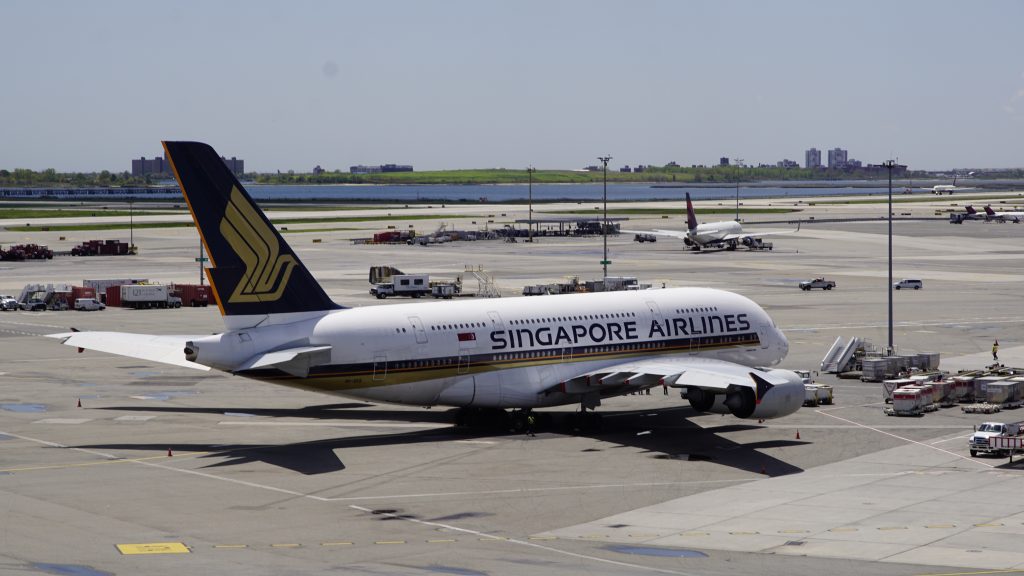 A Singapore Airlines Airbus A380 as seen from the roof of the TWA Hotel. (Photo: AirlineGeeks | Hemal Gosai) 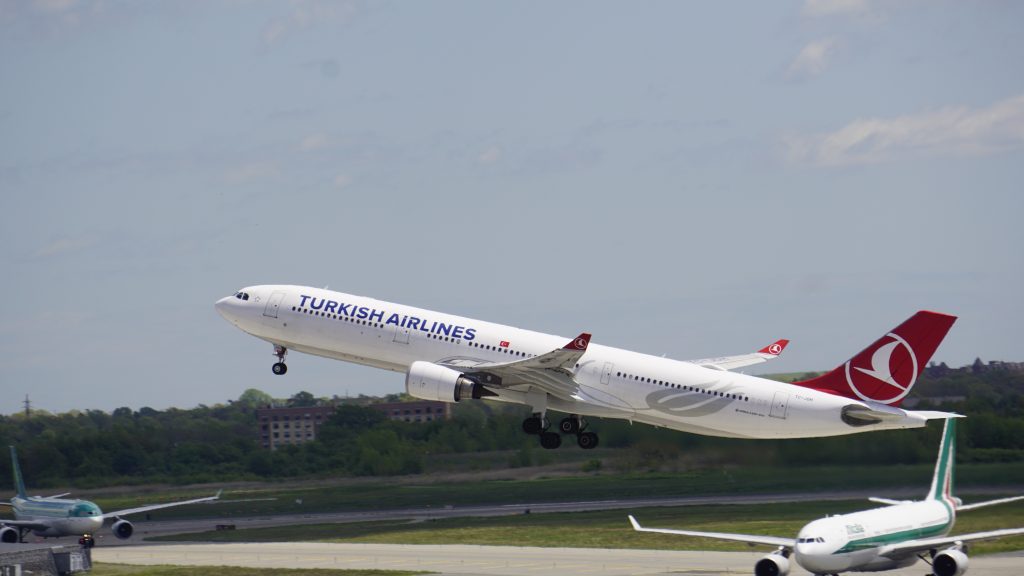 Despite the excitement stirred by all the glitz and glamour, the hotel was far from ready for guests. Rooms were still under construction, food venues still being put together, exposed wiring haunted rooms and more. It seemed as if the hotel initially thought it would be ready for a soft opening but ended up not being able to finish most things in time. 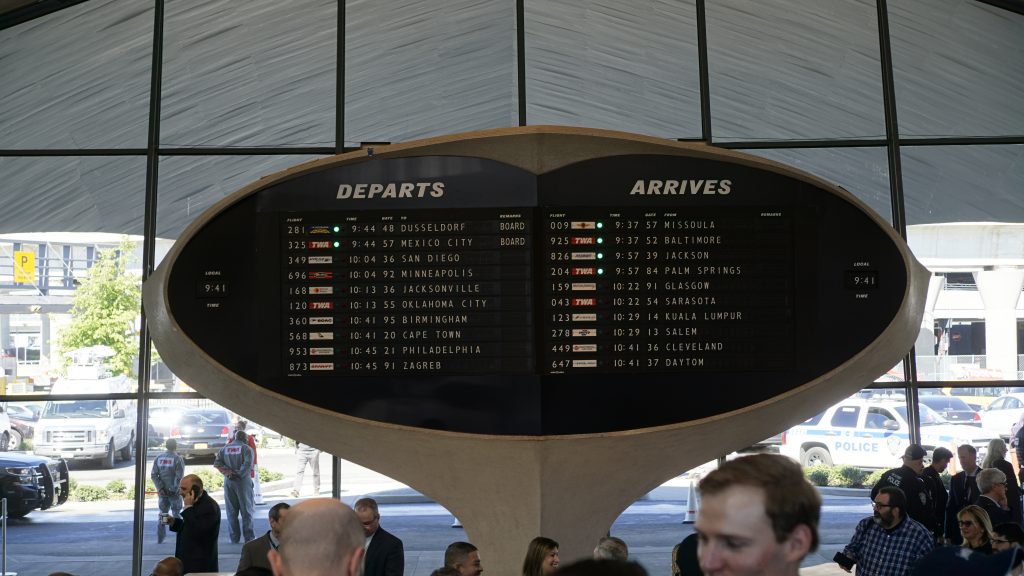 One of two TWA Solari boards in the hotel. (Photo: AirlineGeeks | Hemal Gosai)

With the official check-in time of 3 p.m. being pushed to 4 p.m., many guests had to wait even longer for their rooms. Some rooms had faulty switches and guests had to get creative when it came to trying to sleep and air conditioning also seemed to be a hit or miss.

These issues will eventually be rectified but one upon speaking to one of the sales managers at the hotel, we discovered that the hotel will not offer 24/7 room service dining and also has no 24/7 food offerings either. Despite being an airport hotel with guests coming in at all times of day from all time zones, absolutely no food would be available to guests overnight

The TWA Hotel should come to together after a month or so of additional construction work and is proving to be an excellent addition to JFK, an airport favoring modernity instead of keeping ties to its historic past as shown by the demolition of the Pan Am Worldport and Terminal 3. For now, the general consensus at the opening event was one of happiness that the long-dormant terminal has finally opened its doors again and New York has regained a piece of history.