In this its 30th year, Cape Air has entered into a new chapter with the arrival of its newest aircraft, the Tecnam P2012 Traveller. Officially introducing the aircraft to the public at a ceremony in Hyannis on Wednesday, both Cape Air and Tecnam celebrated the historic moment for both companies, as well as the aviation industry as a whole. 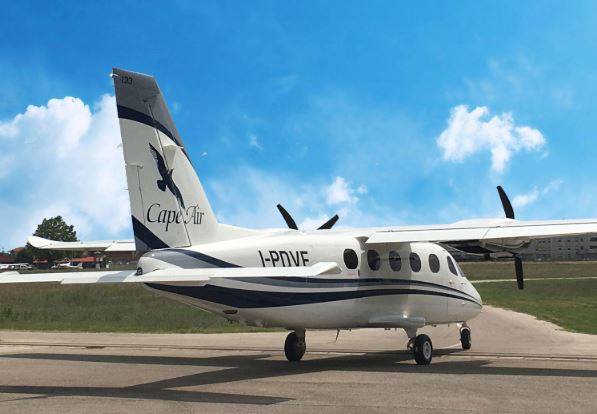 The most modern aircraft to be delivered to the airline in years, the Traveller features countless upgrades for both the pilots and passengers alike. With 100 total aircraft set to join the Cape Air fleet, the aircraft is set to modernize the regional airline while also providing new opportunities including further destinations from main bases and increased efficiency.

Over the next few years, the Traveller will replace Cape Air’s current workhorse, the Cessna 402C piston-powered aircraft, that can be seen primarily throughout the Northeastern United States, beginning in December. As Cape Air is the first operator of the aircraft, it will face trials getting all the required approvals from the Federal Aviation Administration, but is aiming for a December start date.

As the first operator of the new type, the onus is on the airline to develop best practices for the aircraft and set the standard for future operators. A new training program for pilots will also need to be implemented as more aircraft arrive at the airline, including getting a simulator for pilot training. As operating multiple aircraft in a single fleet for an airline of Cape Air’s size, the airline wants to transition as quickly as possible.

The Traveller is the largest airplane produced by Italy’s Tencam and the first nine-seat piston aircraft intended for commercial service to debut in quite some time. Most propeller aircraft have disappeared from the fleets of large commercial carriers, with only a handful remaining in the United States mainly operating turboprop aircraft instead of the less powerful pistons.

While the Cessnas were fit for the job they performed, short hops with durations rarely over an hour, they were not without their disadvantages both in the cockpit and passenger cabin. In the front, the steam gauges of the Cessnas will be replaced by a modern glass cockpit that features weather radar, traffic collision and avoidance systems (TCAS) and new navigation systems.

In the back, nine leather seats in a 1-1 configuration will greet passengers who can expect new luxuries such as air conditioning and heat, not found on the Cessnas. Additionally, Cape Air will seek approval for the use of electronic devices on the Travellers, not currently given to the Cessnas even in this day of widespread use of electronics by travelers to pass the time even on the shortest flights, especially those without in-flight entertainment.

On the wings, where two Lycoming engines will power the new aircraft, the leading edges made of titanium will feature in-flight de-icing systems. As Cape Air flies to colder destinations, especially in the Northeast during winter, such a system will reduce delays and cancellations due to icing conditions and make flights safer if such conditions develop when in flight.

The engines themselves also feature benefits in their operation and noise levels. As a European aircraft, the Traveller needed to meet European noise standards, which are much more stringent than in the U.S., making the ride quieter for those in the air and on the ground, except when in higher power settings.

Unlike the Cessnas, the fuel-air mixture settings for the engines will also be automatically set to make the engines run more efficiently and reduce possible detonation in the engines, a signal of an engine getting too much fuel. The automation of the process also reduces pilot workload in flight and on the ground.

The main benefit of flying Cape Air’s Cessna 402Cs that will be lost with the Tecnam, however, is the ability to ride upfront in the right seat of the cockpit as a passenger. As the Tecnam’s will be flown by two pilots, the days of sitting shotgun while on approach to one of the busiest airport’s in the U.S., Boston’s Logan International Airport, will soon come to an end.

While service between Boston, Cape Cod and the Massachusetts Islands are the airline’s bread and butter routes, the first destinations to see the Traveller won’t be based on popularity, but rather commitments to the government. As subsidized Essential Air Service (EAS) routes make up approximately 40 percent of Cape Air’s revenue, a large focus is to maintain and grow in that market.

Though while non-subsidized routes are fully at the discretion of Cape Air in terms of the equipment used, EAS routes must be bid for and the Traveller proved to be a major selling point in securing some of those routes. For this reason, the airline’s subsidized routes may see the aircraft first.

This will probably sound like a broken record for avid AirlineGeeks readers, but in the Spring of 2022 SkyWest under the United Express brand requested to terminate 31 Essential Air Service communities. Now at least six months later, some of them have said that SkyWest isn't allowed to leave, some…