Connecting the world with Qatar, Hamad International Airport has served as the primary gateway to Doha for the past five years. Home to its largest carrier and Qatar’s national airline, Qatar Airways, the airport has seen rapid growth since its opening as both the entry and exit point to Qatar as well as an intercontinental transit point for passengers across six continents.

Despite its youth, the airport last week announced the next step in its evolution as the primary gateway for its home country and global hub. In the opening celebrations of the country’s Cityscape convention, the airport unveiled an expansion plan to prepare for the FIFA World Cup in 2022, as well as its plans to continue growing after the games finish in support of the country and its national airline.

A New Airport for a Growing Airline

When the airport opened in 2014, Qatar Airways was firmly on track to be one of the world’s top carriers in size and luxury. But having outgrown Doha International Airport with its single runway, a new home would be needed in order for the airline to achieve its goals. 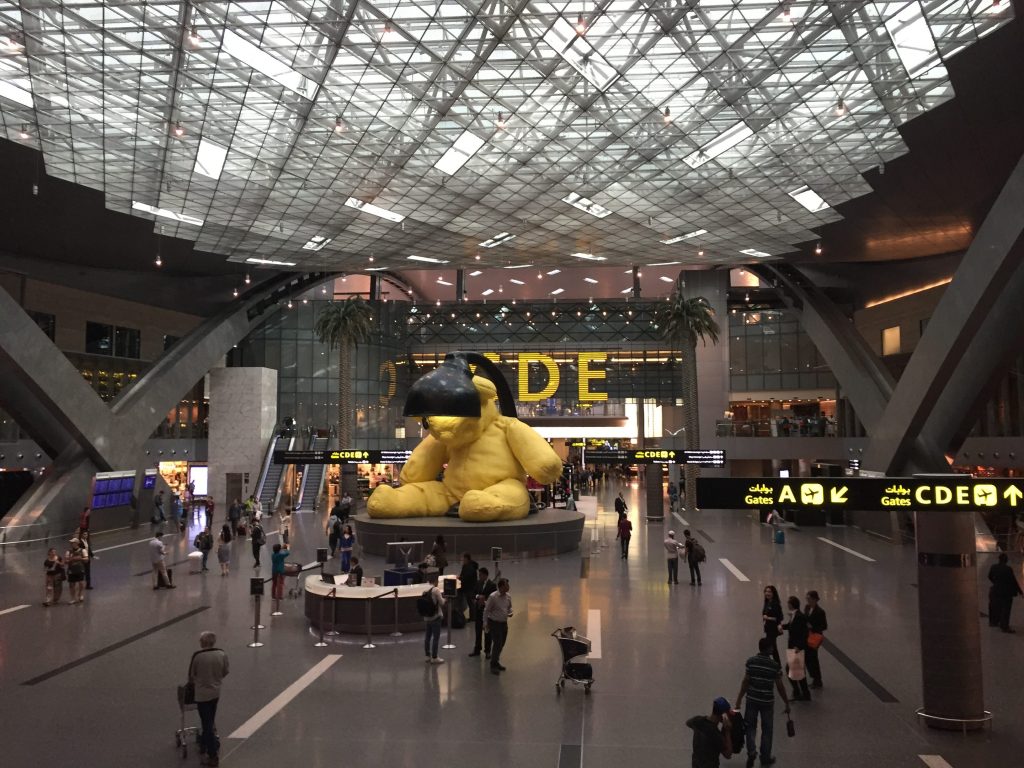 The new airport featured dual runways, a larger terminal and expanded cargo facilities, all to facilitate a steady increase of passenger and cargo traffic to the region and points onward. While tourism to Qatar is on the rise, in part due to Qatar Airways’ stopover program which allows for complimentary tours of Doha and discounted hotel stays, the country is an ideal transit point due to its central location in the region.

In the year before Hamad International Airport officially opened, the passenger numbers for its predecessor reached just over 23 million for the year; however, despite a consistent upward climb, the new airport opened with a projected capacity of 28 million per year, according to Qatar Airways Group chief executive officer, Akbar Al Baker. With only five million passengers to go before reaching capacity, expansion seemed inevitable with the airline set to quickly surpass that number with its growth plans.

Continuing Through the Blockade

Just two years into its run, Hamad International Airport reached over 37 million passengers in a single year, according to Airports Council International, and ranked on the list of the world’s 50 busiest airports in terms of passenger count for the first time. Already, the airport was exceeding its planned capacity by nearly 10 million passengers in no small part due to Qatar Airways’ growth as a leading carrier in the region.

Despite earning a spot on the coveted list, the success would be short-lived as a geopolitical conflict engulfed the region with Qatar at the center. A blockade of the peninsula nation saw its neighbors and other countries cease trading and blocking access to the country.

Overnight, Qatar lost a number of short-medium range routes and its ability to connect the Middle East through Doha was crippled. The airport has not ranked in the top 50 since.

Since the blockade, however, Qatar has since refocused its efforts outside of the Middle East and expanded into other regions such as Europe and Asia. The past two years have seen 19 destinations open since 2018 including Gothenberg, Da Nang, Lisbon and Rabat.

Thanks to the expansion, Al Baker proudly announced the airport is seeing a return to normalcy in terms of passenger numbers. 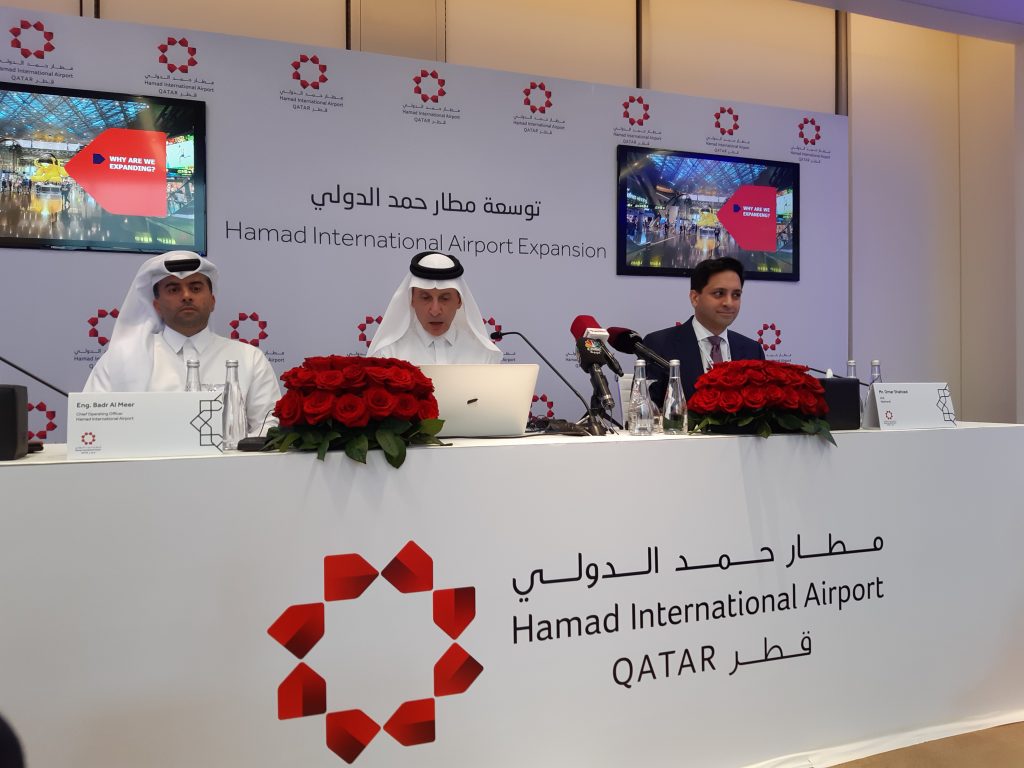 The Great Airport Behind Every Great Airline

“We want to accommodate the growth of Qatar Airways, needless to keep on repeating that we are receiving, on average, one aircraft every 10 days,” said Al Baker. 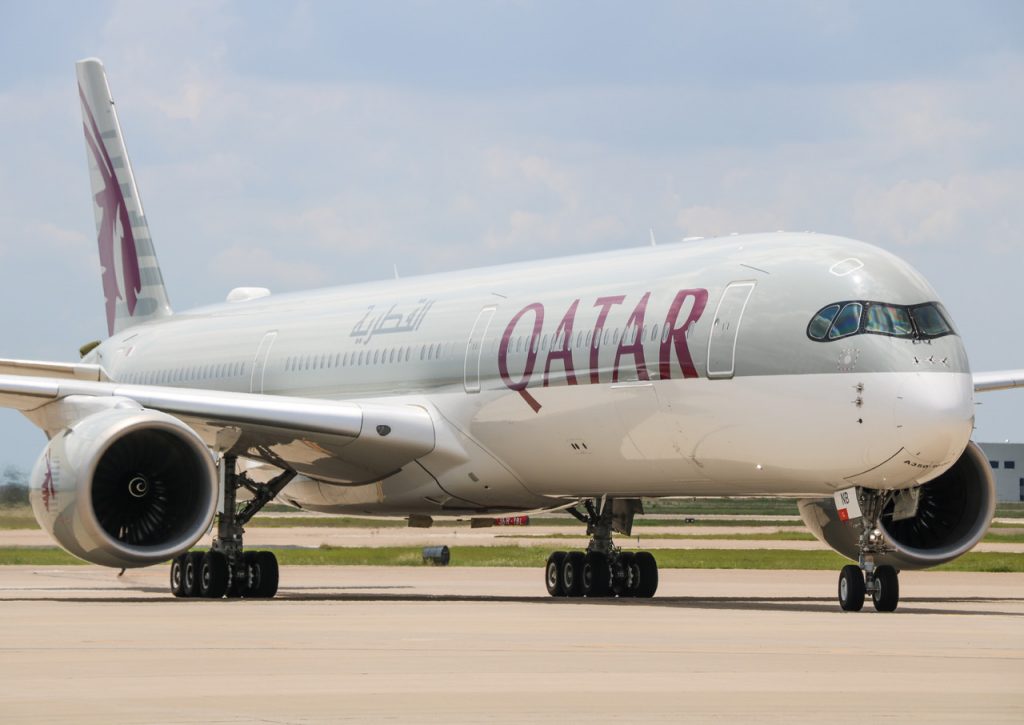 As the State of Qatar pushes through its projects of economic diversification, which includes the increase of tourism numbers, government-owned Qatar Airways plays a pivotal role in these ambitions. Of the current traffic of more than 35 million passengers per year, the airline transports about 90 percent of it, along with solid year-on-year growth.

With the airline only continuing to entice travelers onboard its aircraft with the addition of new products such as Qsuites in business class, as well as maintaining one of the world’s youngest long-haul fleets, traffic will only continue to rise. A five-time winner of Skytrax’ Airline of the Year award, including in 2019, the airport experience contributes greatly to the rating and without a successful Hamad International Airport, the airline’s continuing success may be at risk. 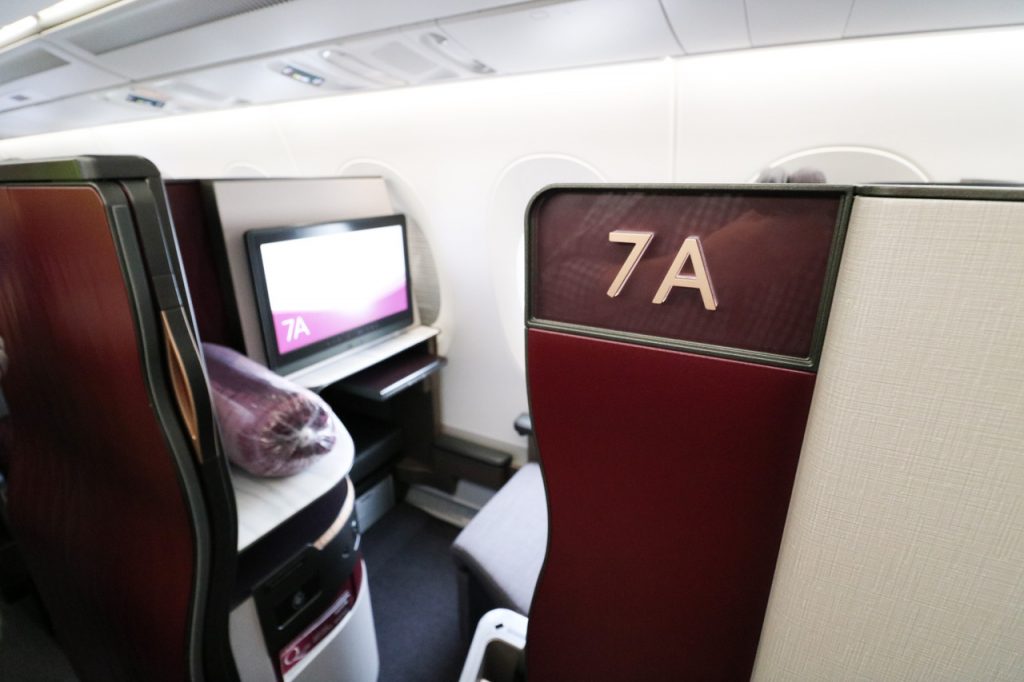 Also succeeding in its task of driving domestic tourism to Qatar forward, airport capacity is quickly getting more and more constrained, bringing the need for expansion to the table faster than expected. As the first impression one has of a country, and Qatar Airways Group as the owner of Hamad International Airport, expanding and adapting to increased growth is vital to maintaining a positive perception of both country and airline.

“We also want to maintain a status as the key global hub,” said Al Baker. “We want really to showcase our
country, and to have an airport that is really second to none.”

To support Qatar Airways’ growth and continue to create a positive first impression on the country’s visitors, the airport plans to push its overall capacity from the current 35 million yearly passengers to more than 53 million passengers per year. Set in two phases, phase A is expected to complete just before the games begin while phase B is to start after the event completes.

Phase A will connect Concourse D and E – the two that stick branch off from the top of the terminal’s main stem, via a central concourse with new gates. The second phase will increase the yearly capacity of the terminal to just under 70 million passengers each year by extending current Concourses D and E. 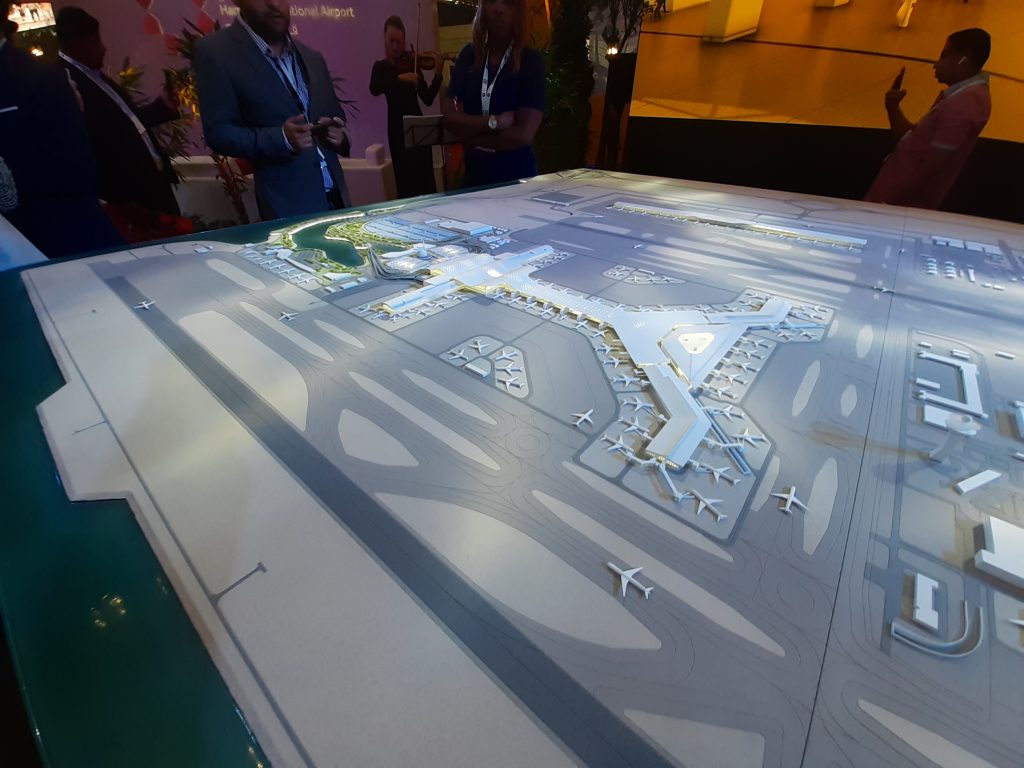 In a few words, Al Baker described the expansion as a plan to transform the airport into a “destination in its own right,” a proposition which is used by most of the major hubs in the east. The surprise was the announcement of an indoor tropical garden on the airside of the terminal.

The garden is planned to be 10,000 square meters as the “center anchor” of the airport enhancement, the focal point for travelers, as Al Baker put it. It will feature flora from three sustainable forest sources from around the world. Another 11,720 square meters are also planned for more shopping and food options for the airport. 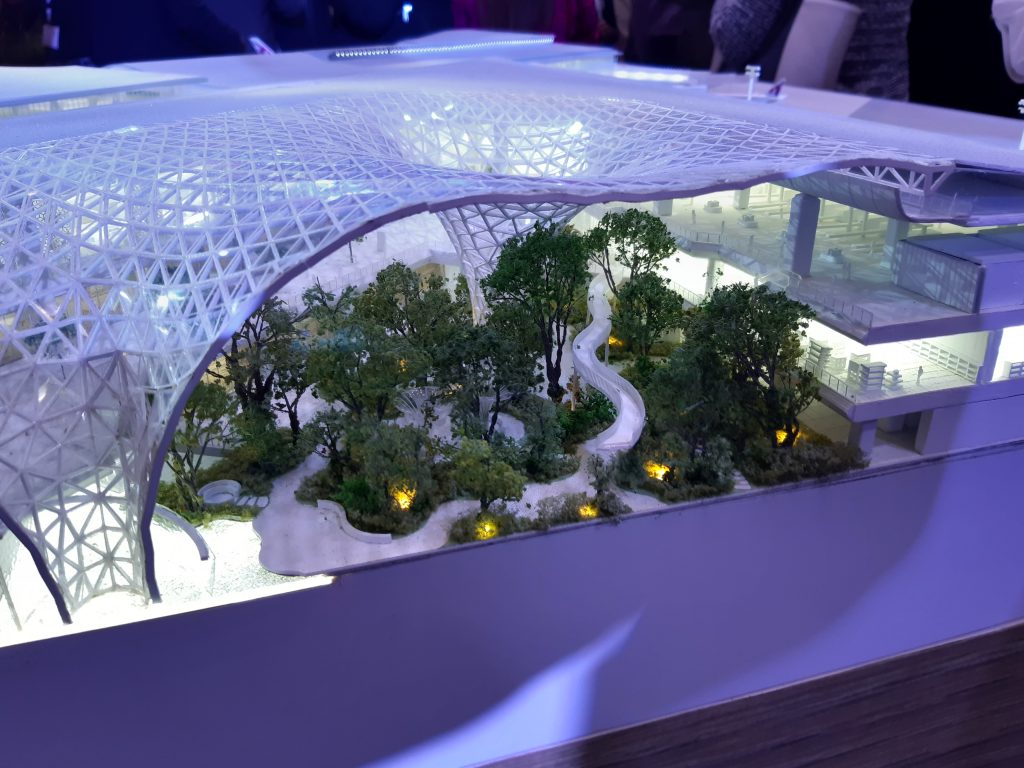 Fully located post-security, all passengers traveling through the airport will have the ability to take in the new amenities. It is estimated that around 80 percent of the passengers at the airport use it just as a transfer point to other destinations, straining the importance of a positive airside experience besides the usual offerings.

However, this is not the first indoor garden to open in an airport, as the first is located at Singapore’s Changi Airport. The Jewel Changi Airport was opened earlier this year and was immediately acclaimed for its stunning flora and indoor waterfall.

“…you will realize that somebody copied our design, which was already on the table nearly six years ago when we were planning already the face to the expansion of Hamad International,” said Al Baker. “And because we had individuals from that particular country — I will not name it — they took our design and did it.”

The main difference with Hamad’s planned garden, however, is that it will be accessible to all transiting and departing passengers since the airport only has one terminal.

“Without having to go to anybody’s Jewel, you can sustain yourself in the jewel of my country. So you don’t have to carry your suitcases, put trolleys, go to immigration and customs, to enjoy anybody’s jewel,” continued Al Baker. “You can enjoy the jewel of Hamad International by being in the envelope — secure envelope — of an international airport.” 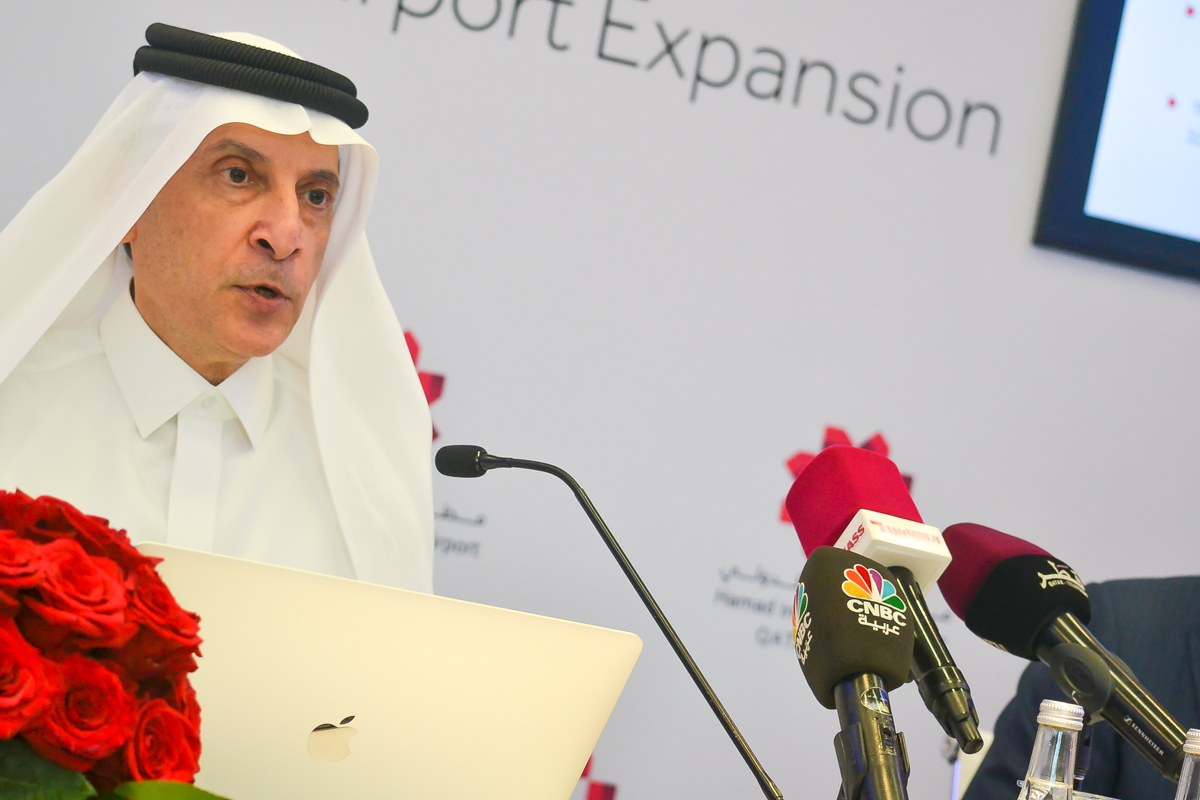 Another major part of the expansion is an increase in the size of the Al Mourjan Lounge, currently accessible to business class travelers. Currently, the space already sees excessive crowding during peak hours. The plan is to develop a new 9,000 square meters of space filled with spas, gymnasiums, restaurants and business centers.

The new space will be set just over the garden and new dining area, with proposed “dramatic” vistas of the greenery. The garden will also serve to provide a reprieve from the standard desert landscape of the Middle Eastern country.

While most of the expansion was based on passenger experience and capacity improvements, the last big announcement from Al Baker was the construction of a new cargo terminal at the airport, set to increase Hamad’s capacity of freight processing more than double from 1,5 million tons of cargo per year to 3,2 million yearly tons. The new three-floor facility, set to be completed by 2023, will cover 323,000 square meters of area and aim to solidify Doha’s status as a true transcontinental cargo hub, as well. 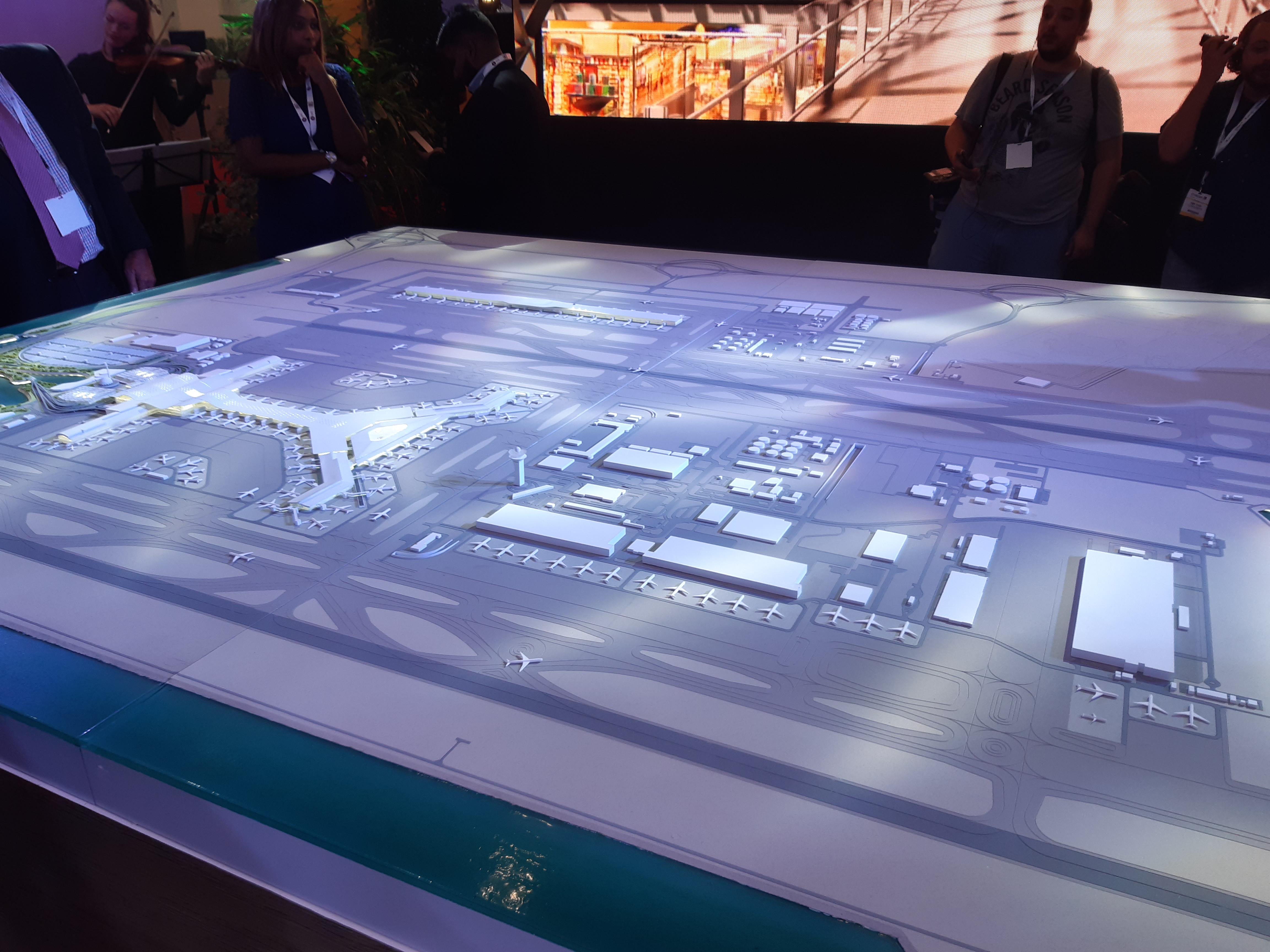 Qatar Airways Cargo currently operates over 20 freighter aircraft including the Airbus A330-200F, Boeing 777-200F and the flagship Boeing 747-8F. The dedicated freighter aircraft have been vital to maintaining trade to the country following the blockage, with the airline taking delivery of its first Boeing 747 Freighter shortly after the blockade was implemented. 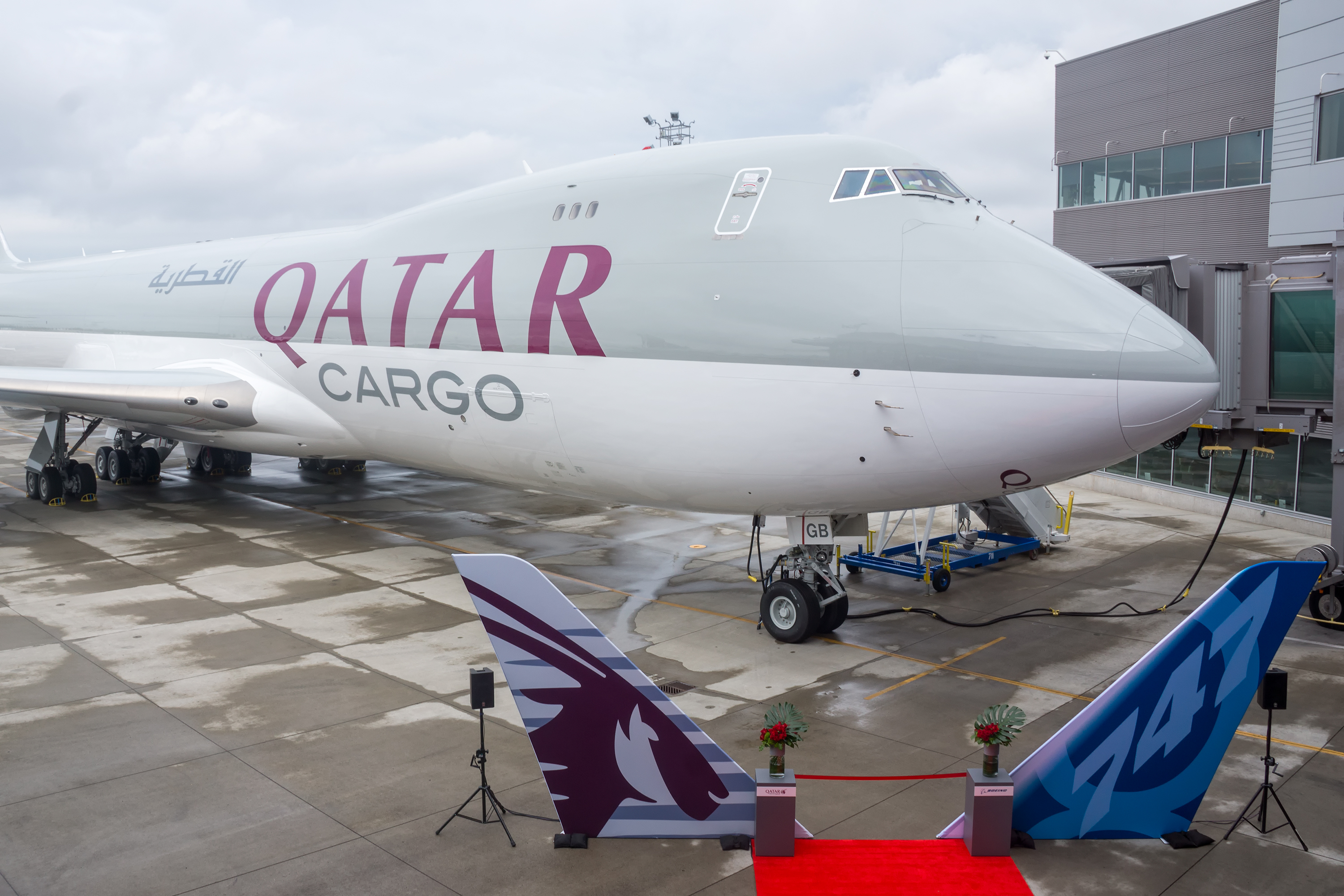 The current cargo complex is located on the airport’s north side, separated by two taxiways from the main terminal, while the new complex will expand there as well as to the west of the main terminal. Qatar Airways’ mainline aircraft are also important in the transport of cargo, including larger models such as the Boeing 777-300ER and Airbus A350-1000 XWB offering large cargo-carrying capabilities.

Growing a Country Through Its Main Airport

With Qatar putting massive investments in every part of the economy in order to bring more touristic attractiveness to the country — the World Cup being the most important of them — having a functional, attractive infrastructure is a must. Having a single airport as the sole gateway to the country turns this necessity into an obligation, and it seems Qatar has acknowledged that concern and embraced the possibilities for expansion alongside its national airline.

“Qatar Airways has it to keep on growing, we will be inviting other airlines, we will be creating business opportunities for airlines to operate into our hub, and we’ll maintain Hamad International Airport’s status as a key global hub and support Qatar’s ambitious tourist strategy and the 2030 vision, and provide further economic stimulus for our GDP.”

Now, it plans not only to have merely a functional airport which allows quick and easy connections but to also have an idyllic “postcard” airport, to impress and warmly welcome the passenger upon arrival to the country, even if having a quick transfer to another destination.

After all, as the saying goes: “you never get a second chance to make a good first impression.”