One of the fallouts of the recent few months has been the rapid acceleration of retirements of aircraft that airlines believed were going to withstand a few more years. Peel back the emotional retirements like McDonnell-Douglas MD-80s and Boeing 747s and you will find some other noteworthy names fading into history, including the increased disappearance of the Embraer ERJ-190 from North America and for years to come.

Coming off the back of the successful Embraer ERJ-170, the ERJ-190 was built as a stretch version that allowed for seating closer to and slightly over 100 passengers. The aircraft type was built to utilize the General Electric (GE)CF34-10 turbofan which would keep it similar to the ERJ-170 and its main competitor: the Bombardier CRJ. The larger GE CF34-10 variant of the engine provides an additional 5,400 lbs per engine compared to the -8 engine on the E170, allowing the larger plane to have a higher cruise speed of .78 over its smaller counterpart. jetBlue would take hold of the first E190 in 2005 and would become the most popular consumer for Embraer type at 60 aircraft, besting Brazilian LCC Azul by nine orders. In total 564 E190s and 172 E195s would be produced.

Flash forward to the beginning of 2020 and it’s a new story, the Embraer’s largest iterations of the E-Jets already seeing their time in the North American skies fade as the newer E190-E2 and A220 were posing a threat to the decade-old design. Since launching in 2005, service was seen on the Brazilian jet for flights operated by Frontier Airlines and Midwest Airlines via Republic Airways, US Airways and post-merger with American Airlines, jetBlue, AeroMexico, and Air Canada. Frontier would phase out the Republic jets during the mid-2010s when they switched hands from Republic Airlines Holdings to Indigo Partners. Midwest and Frontier Embraers were operated in 99-seat all-economy class configurations.

But after that the news of Embraer ERJ-190 retirements stagnated. The fleets were being utilized consistently and played the perfect mid-sized aircraft for routes that were too small for other mainline models but large enough for regional jets. This was clearly displayed in the US Northeast, where American and jetBlue stationed most of its fleets.

However, the news of retirement plans for the aircraft type started to emerge over the last few years. American and Air Canada saw the need to retire their fleets as newer aircraft types and fleet consolidations saw the Embraer aircraft on the outside looking in.

Air Canada had made the Embraer a mainstay in flights both operating domestically in Canada and for limited operations south of the border into the United States. Air Canada peaked with 45 models between 2008 and 2015, making it one of the highest quantity of aircraft in the airline’s fleet. Aircraft were configured in a 97-seat form with a 9 business class, 20 preferred economy and 68 economy class seating arrangement.

Air Canada would start phasing out the aircraft type in 2015 with leased models from Boeing Capital Corporation being removed after less than ten years of service. This retirement process was running consistently with just 14 Embraer ERJ-190s being left in the flag carrier’s fleet by 2020. The slow retirement would come to an abrupt end on May 4, 2020 when Air Canada announced the immediate suspension of Embraer E190 activity alongside Boeing 767 and Airbus A319 accelerated retirements as part of the COVID-19 epidemic. The Canadian carrier had already planned on replacing the jets anyway, with Airbus A220s coming online to take over the smaller mainline routes.

Just one week earlier, American Airlines had taken a similar step by retiring its own fleet of the aircraft type. American had inherited their Embraer ERJ-190s from the merger with US Airways and had utilized them on routes to midmarket cities like Cleveland and Pittsburgh. US Airways and American E190s would be formatted to have eleven business class and 88 economy class seats. American had hinted at the retirement of the 20-jet fleet for years but had appeared to buy some time for the aircraft type with the Boeing 737 MAX issues. This delay in retirement would reverse course once COVID-19 would hit, with American announcing an immediate exit for the aircraft type on April 30th.

Next to note would be the largest operator of the Embraer ERJ-190 and their slow exit from the aircraft type in jetBlue. The New York-based carrier was the launch customer for the larger ERJ-170 back in 2005 and would take delivery of 60 aircraft as they expanded its presence along with the fleet of Airbus A320s. jetBlue has flown the jets through its route map for the last decade and a half but recent demands on the aging jet have left the low-cost carrier beginning to replace the smallest plane in its fleet.

jetBlue’s current plan calls for the Airbus A220-300 to begin a long and slow replacement process as it will assume the role that the Embraer currently holds. jetBlue has 70 of the Canadian designed, French-owned aircraft type on order and begins delivery in 2021. This process would take roughly four years with the final Embraer leaving jetBlue in 2025. Alongside making jetBlue an all-Airbus fleet, the A220-300 will also increase capacity on current Embraer routes, bring the total number of seats up to 140 per plane from the Embraer’s 100 per plane. Both models will come with standard economy seats and jetBlue’s Even More Space economy seats.

So, who is left in North America with the Embraer ERJ-190? Well, AeroMexico. The aircraft type has become a staple for the regional branch of Mexico’s largest carrier and is utilized across the route map, serving everything from short domestic hops to stints to neighboring countries, including the southern United States, Guatemala, and Panama. The carrier ordered their original batch of Embraer E-Jets with deliveries starting in 2005 to replace older model aircraft. On top of this the airline has taken advantage of other carriers removing their Embraer ERJ-190s to expand their fleet to the present amount of 47 aircraft, the largest number of a single aircraft type in AeroMexico’s mainline and regional fleet.

Being so vital for AeroMexico’s route map, the airline has not made any plans to retire the aircraft and will assume the role of largest Embraer ERJ-190 operator from jetBlue as the US carrier slowly diminishes their fleet over the next few years. AeroMexico Connect has only lost one E-Jet during its 15-year history of operating the aircraft type, losing XA-GAL to a microburst and post-crash fire in a 2018 crash at Durango. 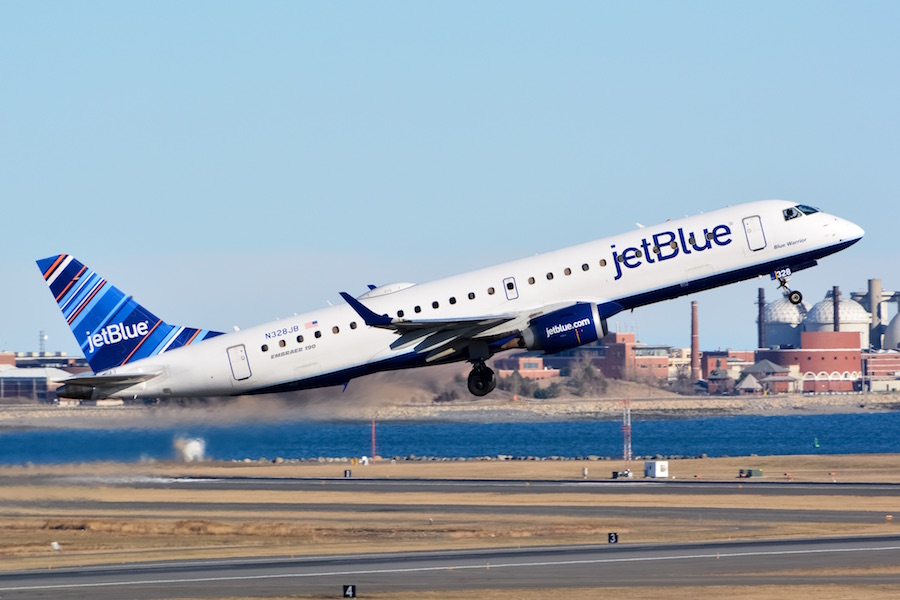 Furthermore, David Neeleman’s Breeze Airways startup is utilizing the Embraer ERJ-195 on their quest to form a new US carrier. The airline-to-be has formed a lease agreement with Brazilian carrier Azul for up to 30 Embraer ERJ-195s to be transferred to Breeze for the start of the carrier. Breeze eventually plans to operate a fleet of 60 Airbus A220-300s and to start operations around 2021. The deal also comes as Azul plans for the next iteration of the Embraer E195-E2 to become more prominent in the fleet, replacing the older variant for flights around the country. However, this deal will be under fire by recent events as Azul has delayed its E195-E2 deliveries until 2024 because of the current drop in demand.

While North America is not the only region to see the largest E-Jet vanish, it is a noteworthy drop that means that the chances of flying on the jet are numbered. The aircraft remains popular in Europe and Asia, where airlines like KLM, Austrian, J-Air, and Tianjin all operated flights prior to coronavirus on the twin-engine regional jet and plan to use the planes once again once the pandemic ends. And while airlines like FlyBe might add to the E-Jet losses over COVID-19, the accelerated disappearance in North America means that those wishing to ride in the 2-2 seat configured jet might want to expedite their bookings once safe to do so.