This is the second of a two-part series on this trip. Part one can be viewed here. A video trip report for both legs is available at the end of this video or at this link.

After a peaceful 30 minutes wandering around Chicago Midway’s Terminal A, I headed to the flight monitors to see where my return flight would be, and, within a sea of Southwest logos, there was the white North Country Sky logo and Manistee showing the departure gate of ‘A10’ for my return flight. 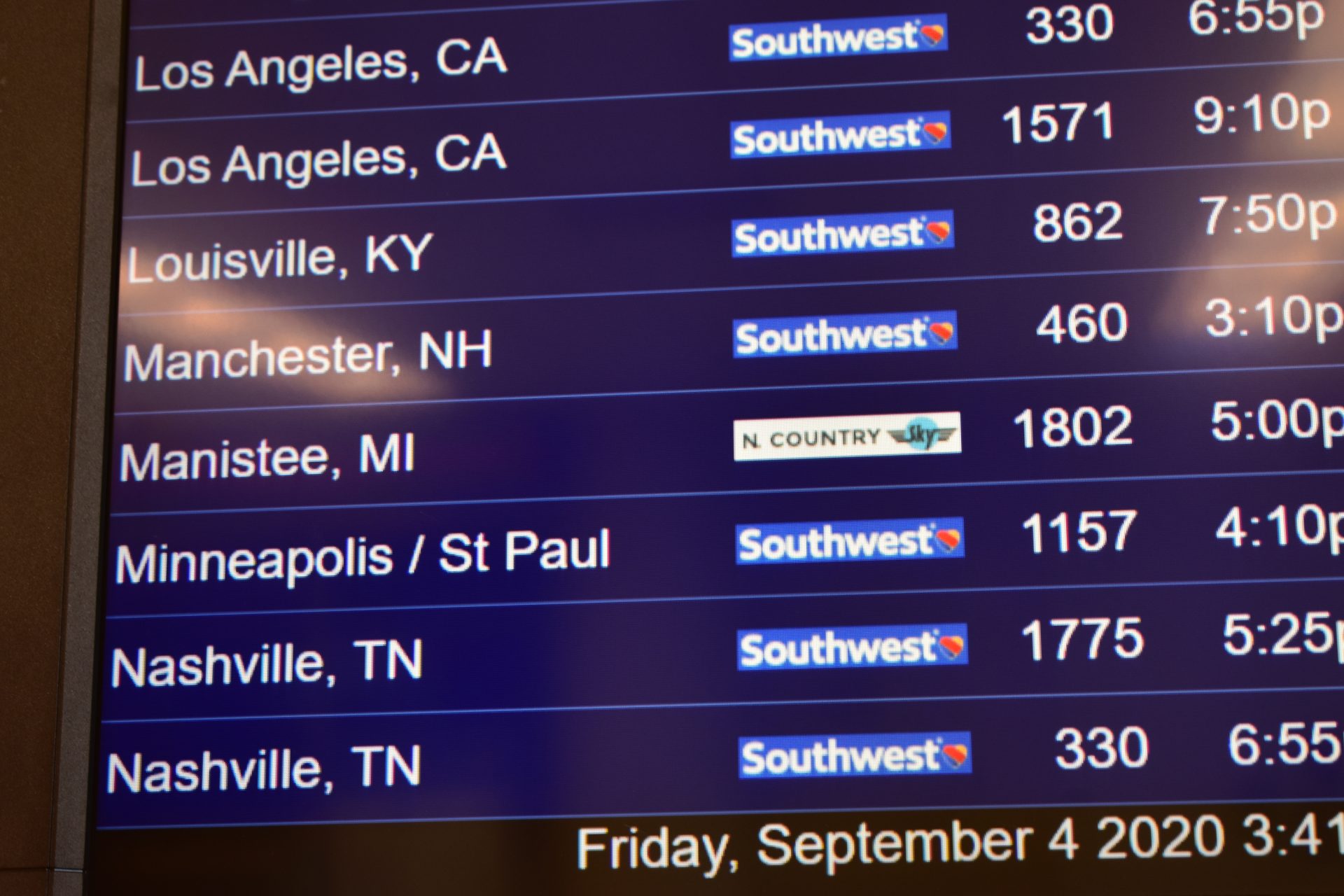 The gate area was crowded, making me think the flight would have a full load of 30 passengers back to Manistee. This turned out to be incorrect, as most people near the gate disappeared when Southwest started the boarding process at another nearby gate. 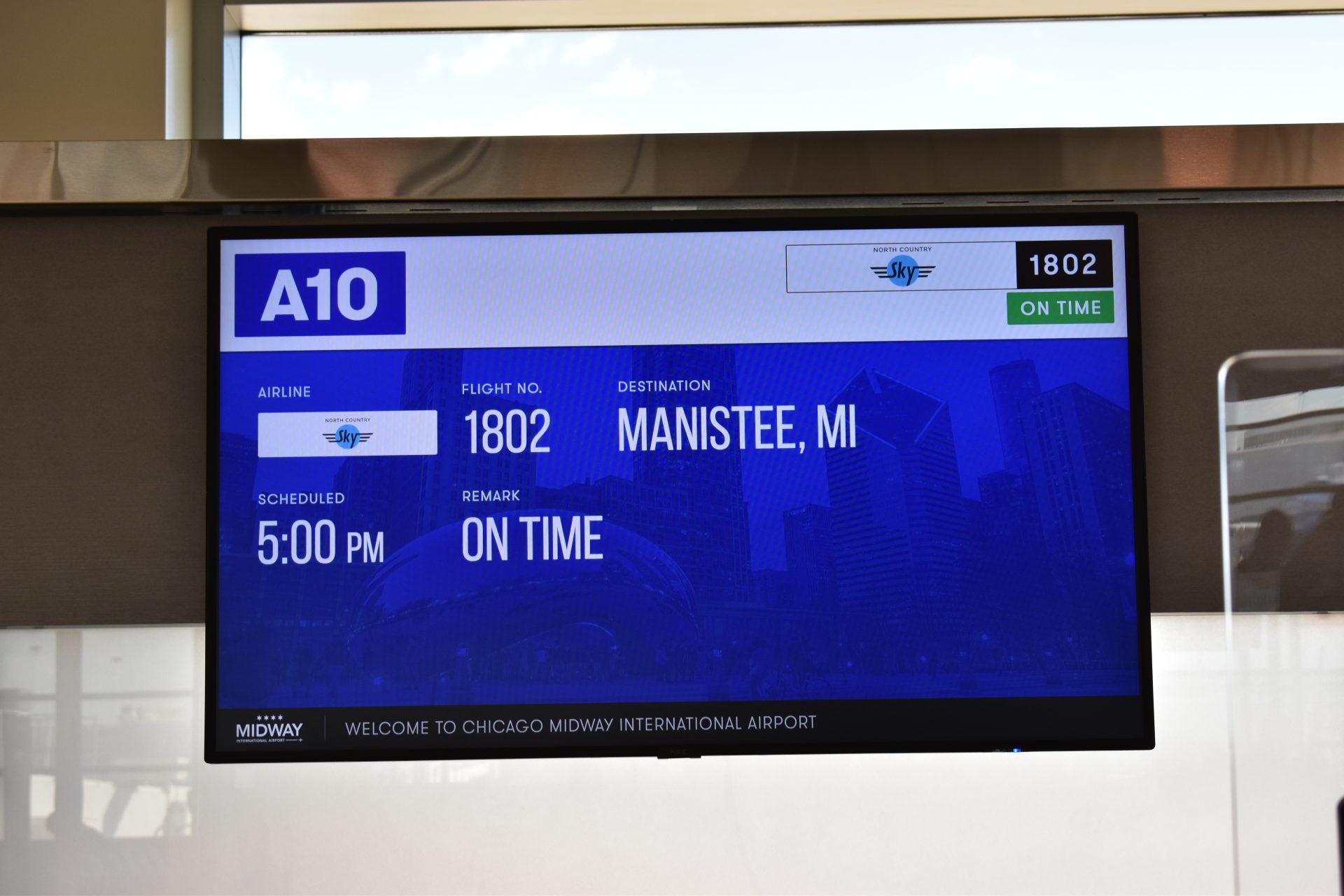 The monitor at the gate for my flight back to Manistee (Photo: AirlineGeeks | Joey Gerardi)

As I didn’t need to leave security after my inbound flight, I wondered how the airline handled connecting passengers. I learned about an hour before the flight when I again got a call from a local North Country Sky representative inquiring if I was to fly.

My boarding pass for the flight back to Manistee (Photo: AirlineGeeks | Joey Gerardi)

This time, the boarding pass has a seat number printed right on it. I was assigned the seat of 11A. Boarding began and we went out to the aircraft via a jetway and stairs leading to the ground.

My aircraft for the return flight would be a 2000 Dornier 328-Jet registered as N407FJ. The aircraft, at the time, was owned and operated by ‘Ultimate Air Shuttle’. 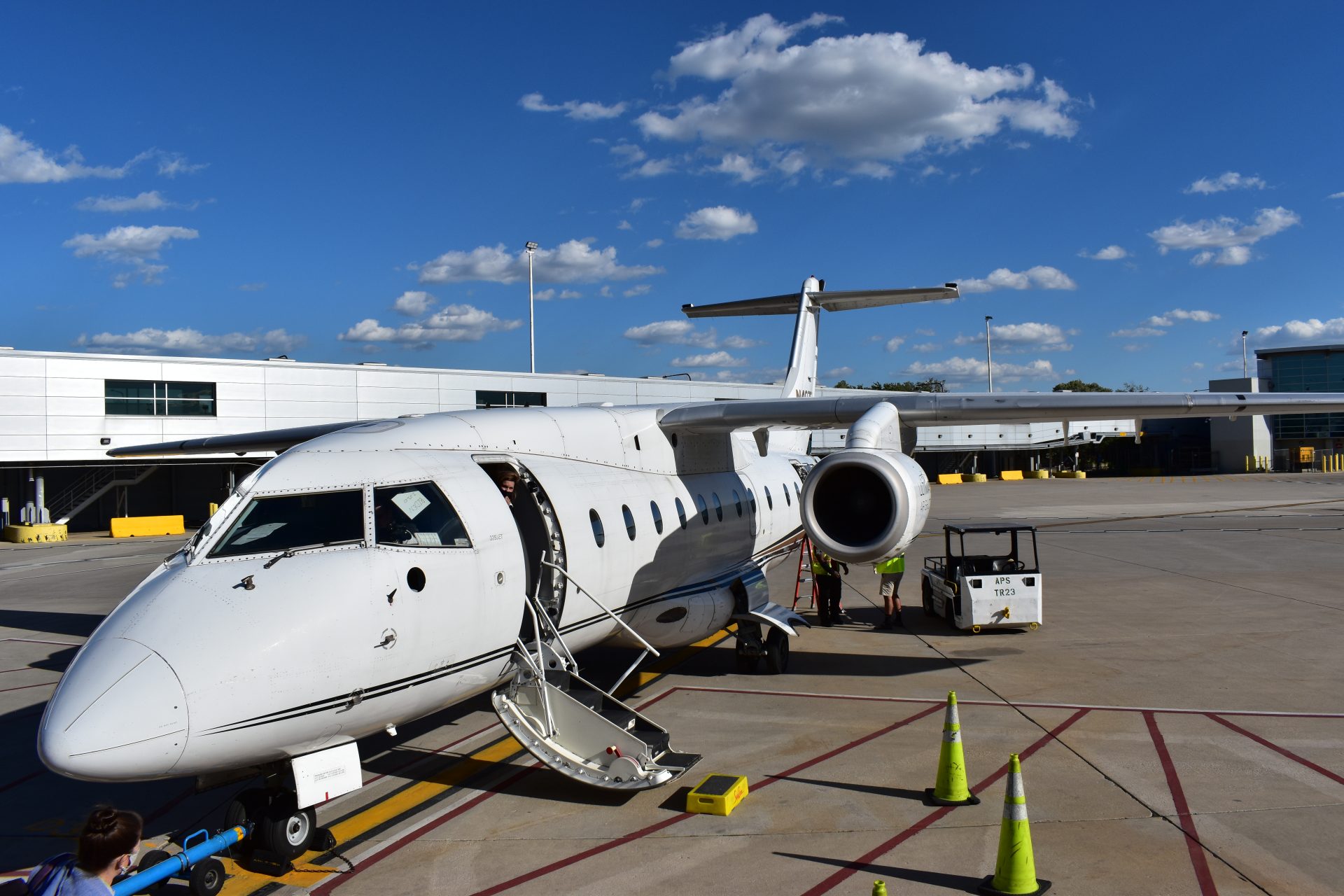 The 2000 Dornier 328Jet that would bring me back to Manistee (Photo: AirlineGeeks | Joey Gerardi)

As I boarded the aircraft, I noticed how spacious the 30-seat passenger cabin is in a 1-2 layout. The seats were very comfortable and had generous pitch. 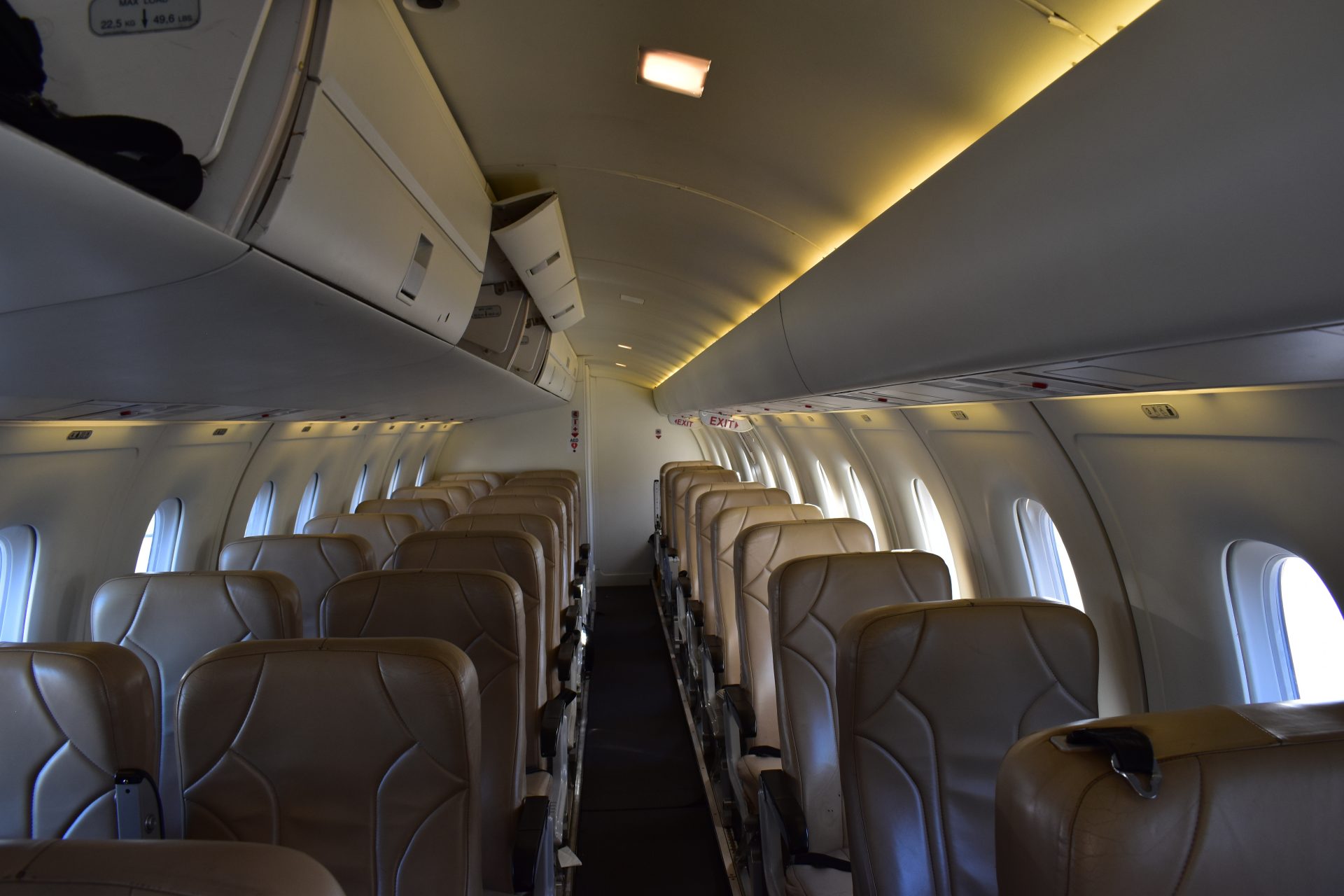 The 1-2 layout of the Dornier 328Jet (Photo: AirlineGeeks | Joey Gerardi)

I headed back to seat 11A, which turned out to be the very last seat in the plane next to the bathroom. When I reached the seat, there was a purse and a sign on the seat saying “Flight Attendant Use Only” 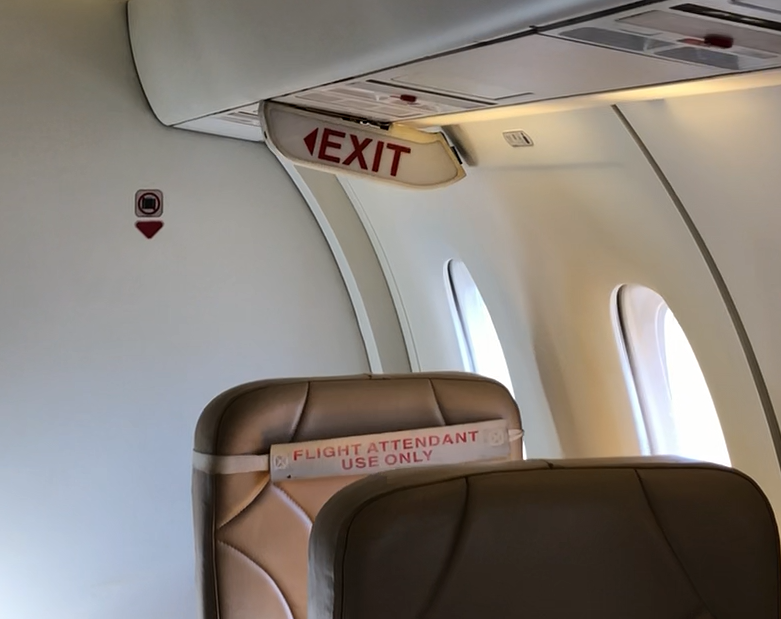 The “Flight Attendant Use Only” sign on seat 11A (Photo: AirlineGeeks | Joey Gerardi)

I inquired with the flight attendant about this and was told I could sit anywhere I would like. I originally chose “2A,” which is the first seat on the left side of the aircraft, although I couldn’t find the seat belt and decided to move just behind it to seat 3A as the aircraft prepared for push back.

This seat gave me a nice view of the engine. And since this is a high-wing jet, I got views of the landscape below through the rather large windows. 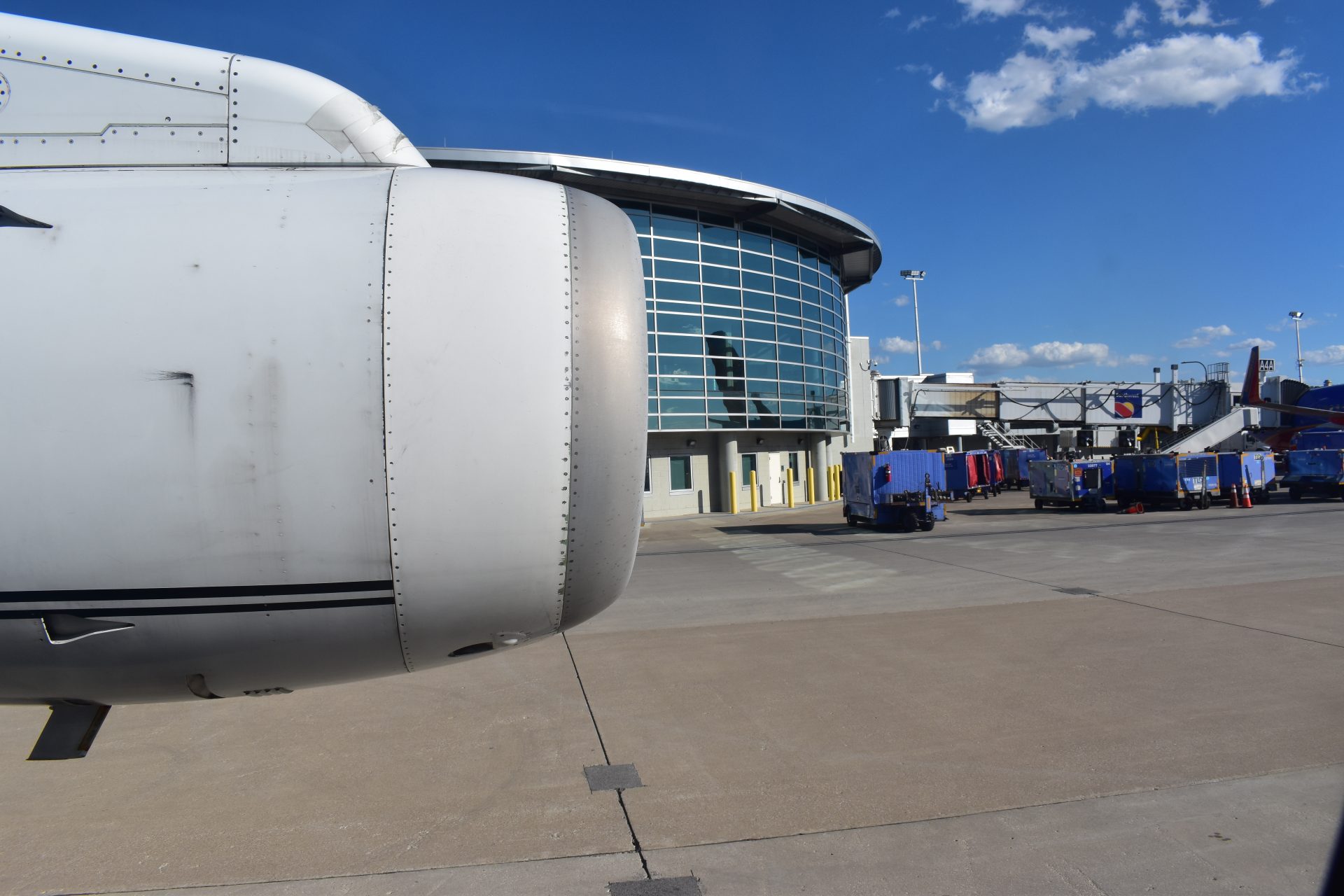 The view from seat 3A on the Dornier 328Jet (Photo: AirlineGeeks | Joey Gerardi)

Push back went smoothly and we lined up with the Southwest jets for takeoff. Following the landing of a Southwest Airlines Boeing 737, we took off from runway 31R and banked left briefly before turning right and heading straight for Manistee over Lake Michigan. 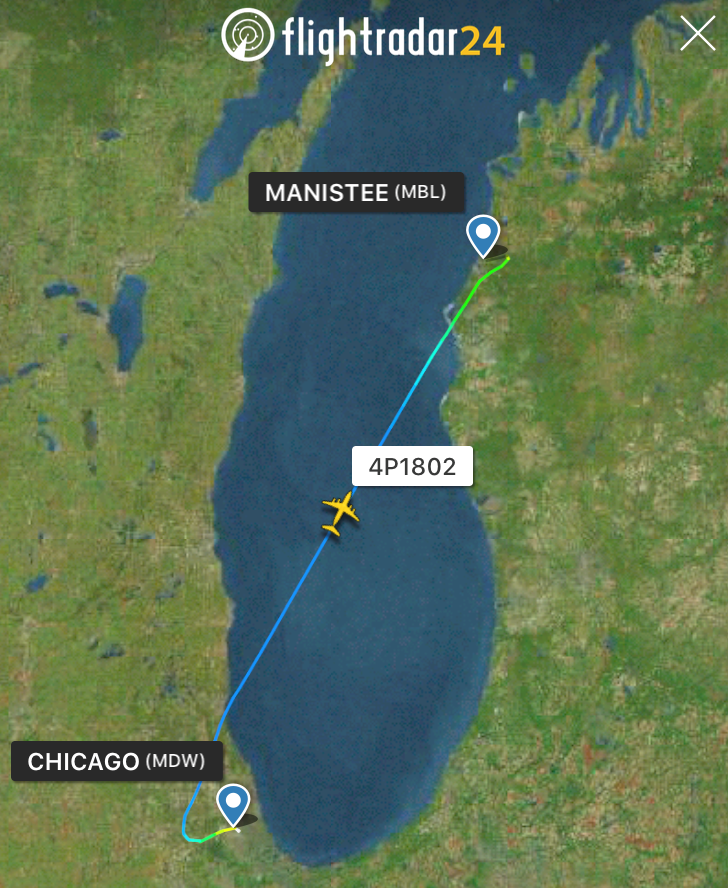 The map of the flight back to Manistee (Screenshot from FlightRadar24)

As we began our climb to the cruising altitude of 16,900-Feet, the flight attendant began the snack and drink service. I was surprised that they offered this on the flight as it would be a short flight. They had the same drink selection as a larger airline might and had more snack options than most of the majors, offering brand-name snacks. 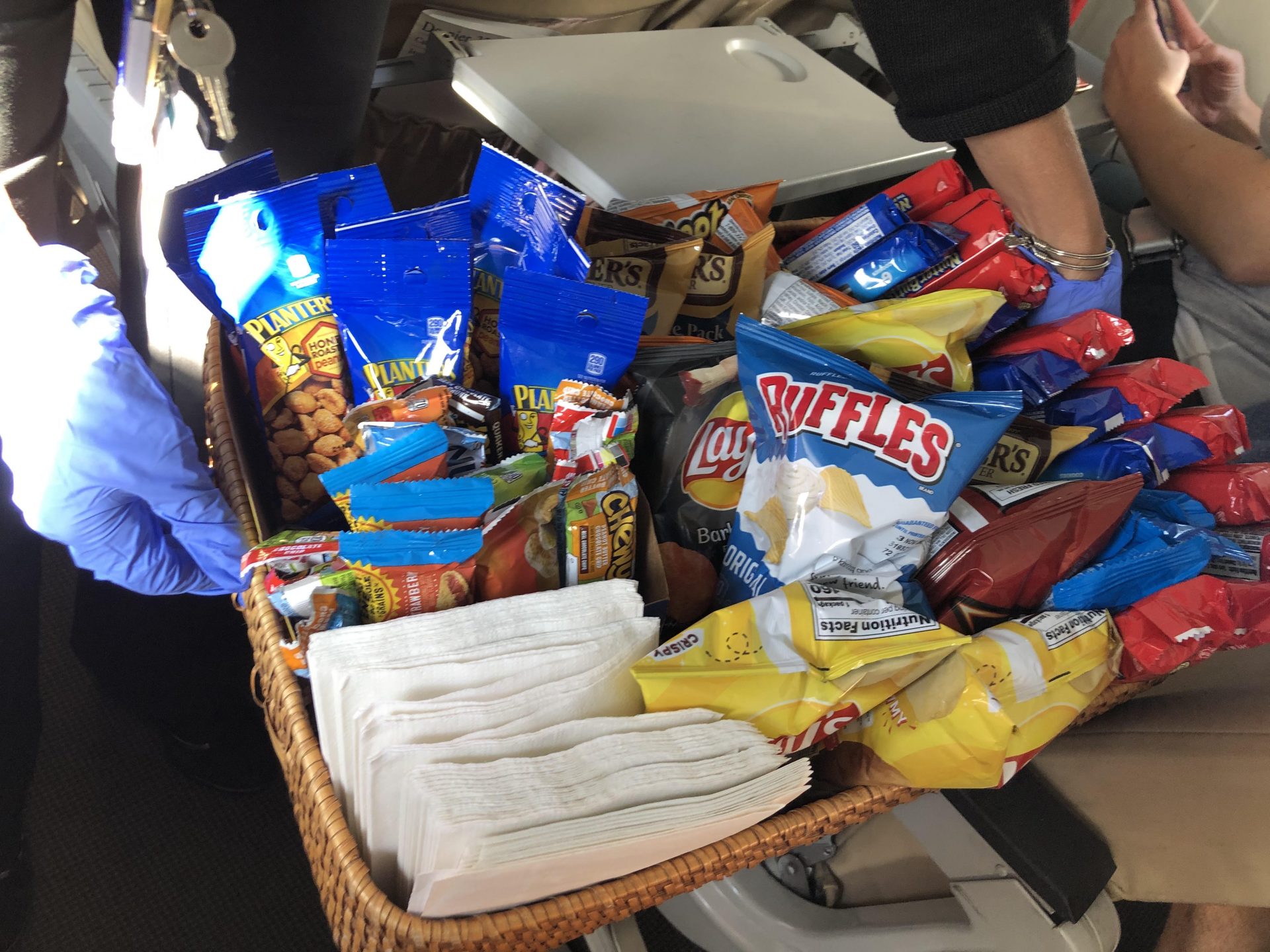 The amazing snack selection on board my flight back to Manistee (Photo: AirlineGeeks | Joey Gerardi)

After the in-flight service was over, I told the flight attendant about the missing seat belt in the row I previously tried to sit in before leaving Chicago. After some searching we found that the seatbelt had somehow got put under the seat cushion.

Now with a seat belt, I decided to move back to seat 2A, which gave me an amazing view of the front end of the engine and Lake Michigan below. 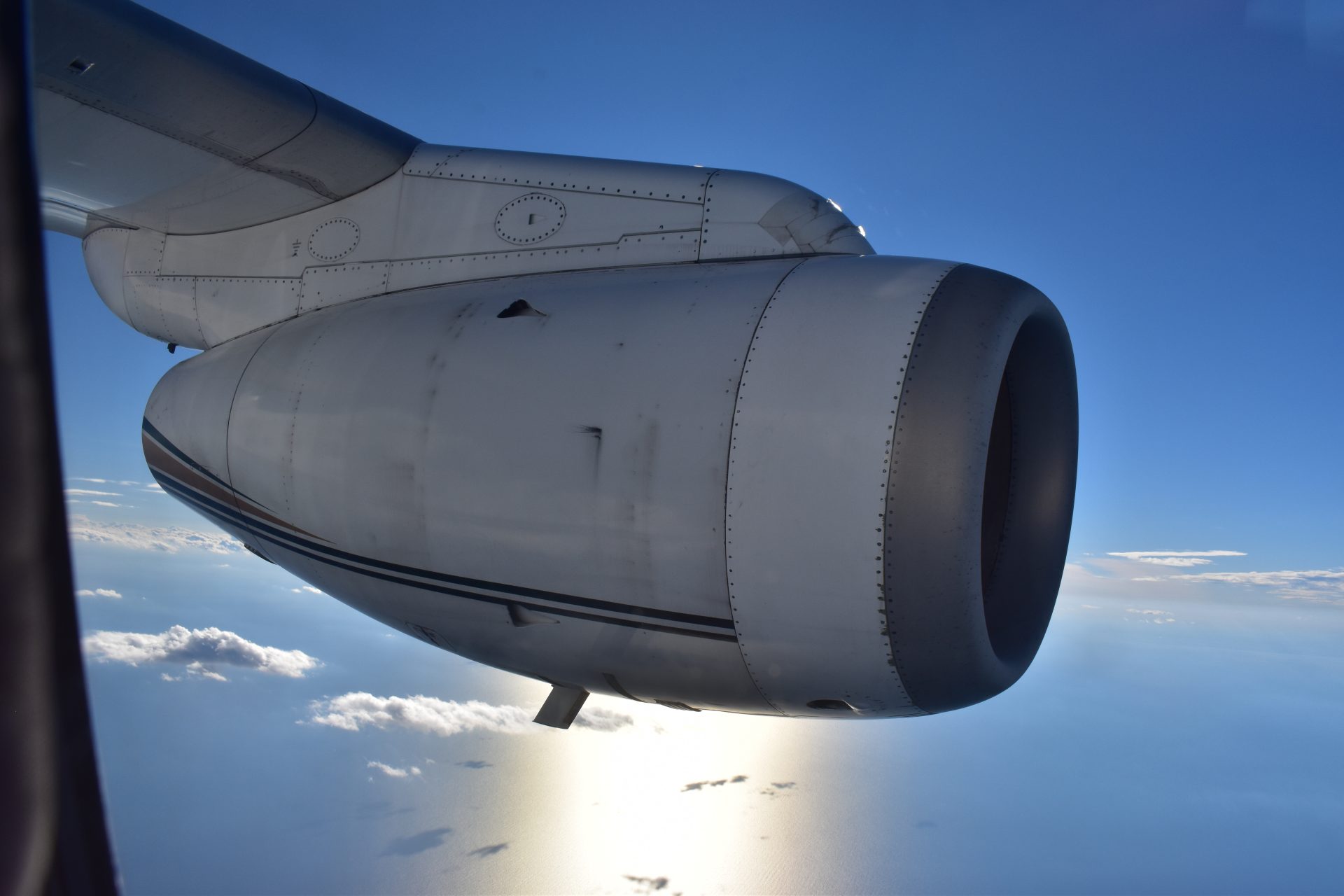 The view from my newly selected seat, 2A (Photo: AirlineGeeks | Joey Gerardi)

Unlike the Beech-1900 aircraft, this Dornier 328Jet had an air sickness bag in the seat back pocket, but what really struck me was what it was called: they referred to it is a ‘Convenience bag’ and intended it to be used for vomit and urine disposal. 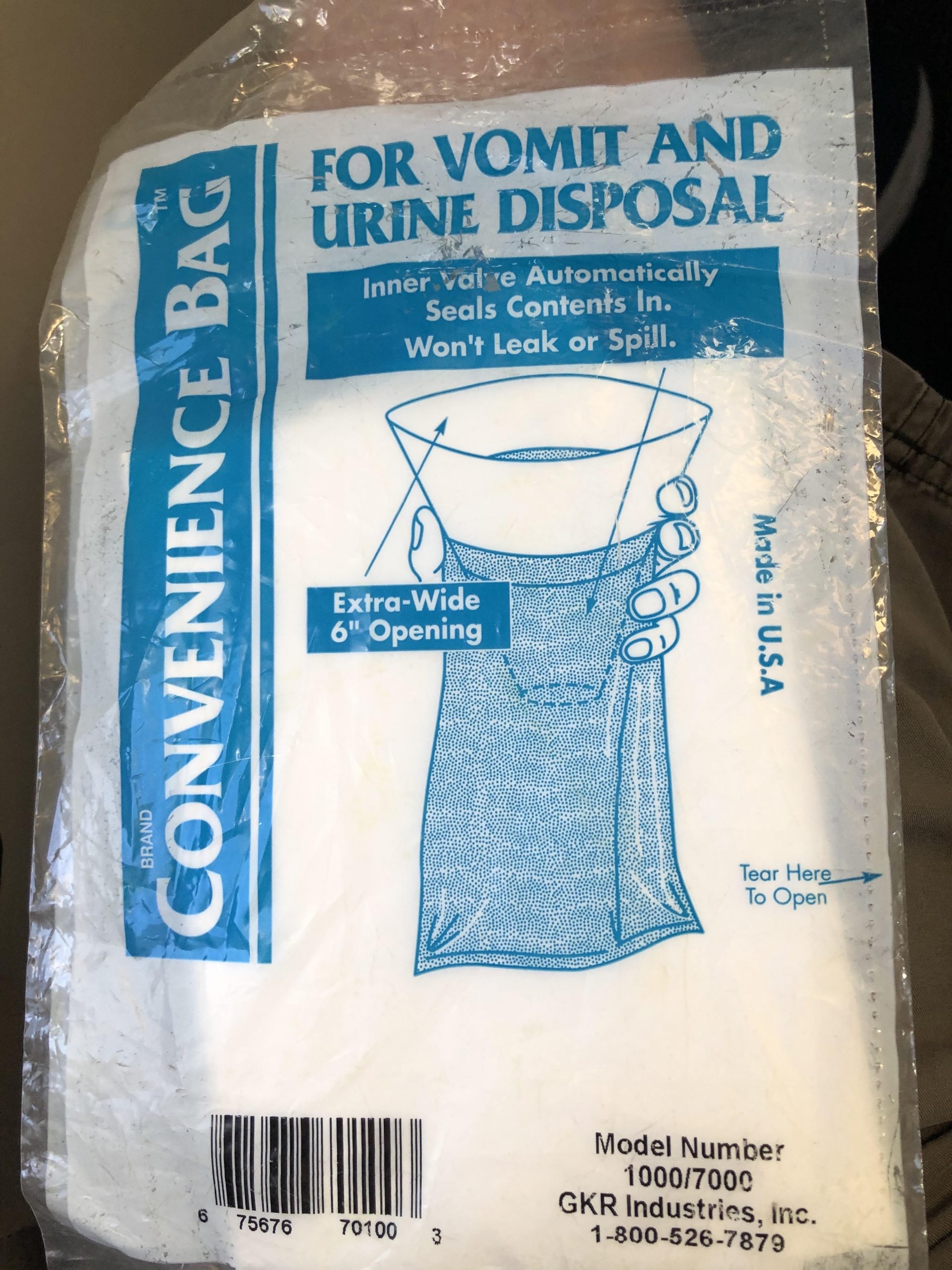 The ‘Convenience Bag’ in the seat back pockets of this Dornier 328Jet (Photo: AirlineGeeks | Joey Gerardi)

I found it quite amusing that they had a bag for urine disposal on an aircraft that came equipped with a bathroom while the aircraft with no bathroom, the Beech-1900C, didn’t have one.

Before I knew it we had begun our descent into Manistee. Eventually, we reached the western Michigan coastline and got some amazing views of the eastern side of Lake Michigan 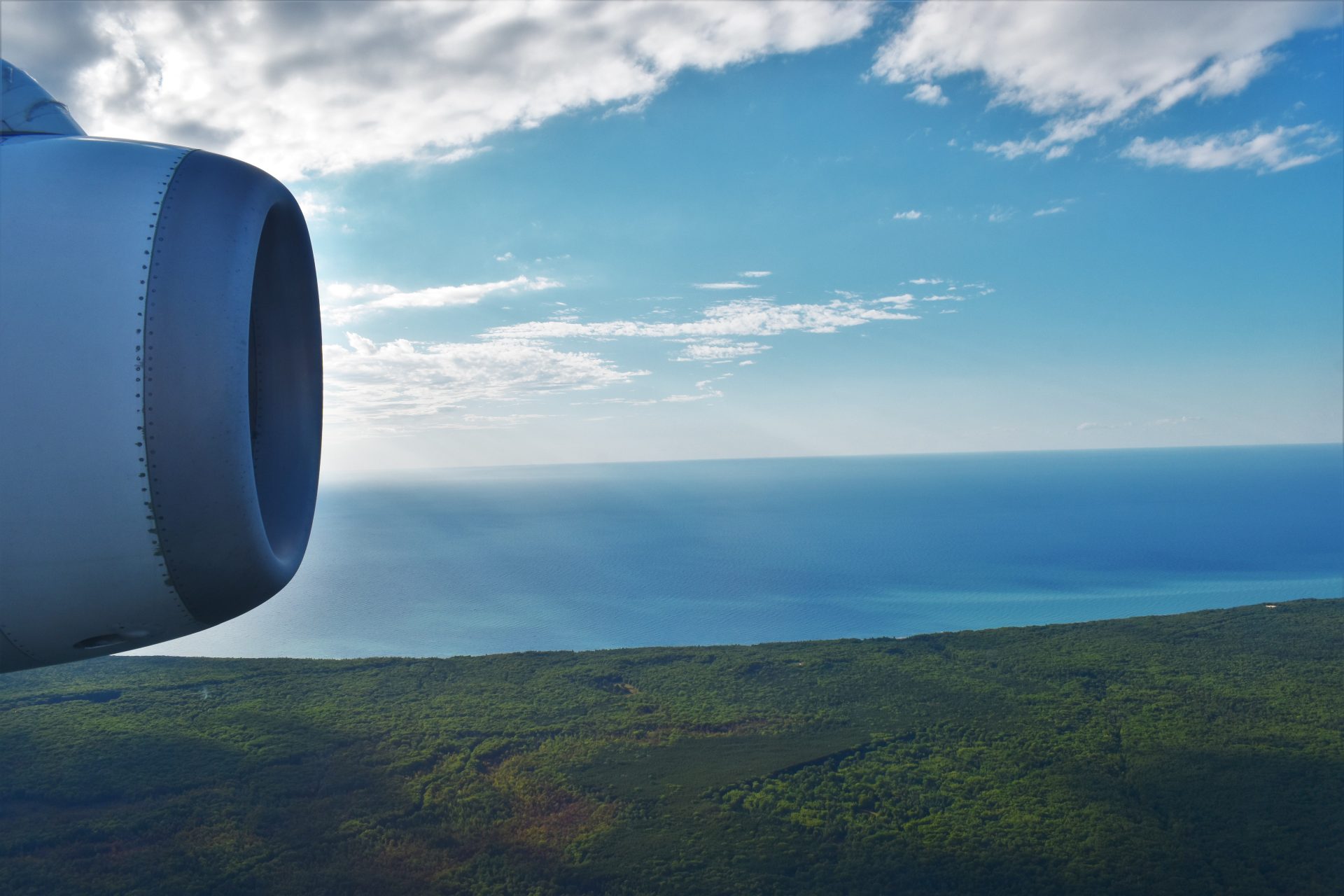 A view of the west Michigan coastline as we approach Manistee (Photo: AirlineGeeks | Joey Gerardi)

Now on the downwind leg of the traffic pattern, passengers on the left side of the aircraft could clearly see the Manistee airport. 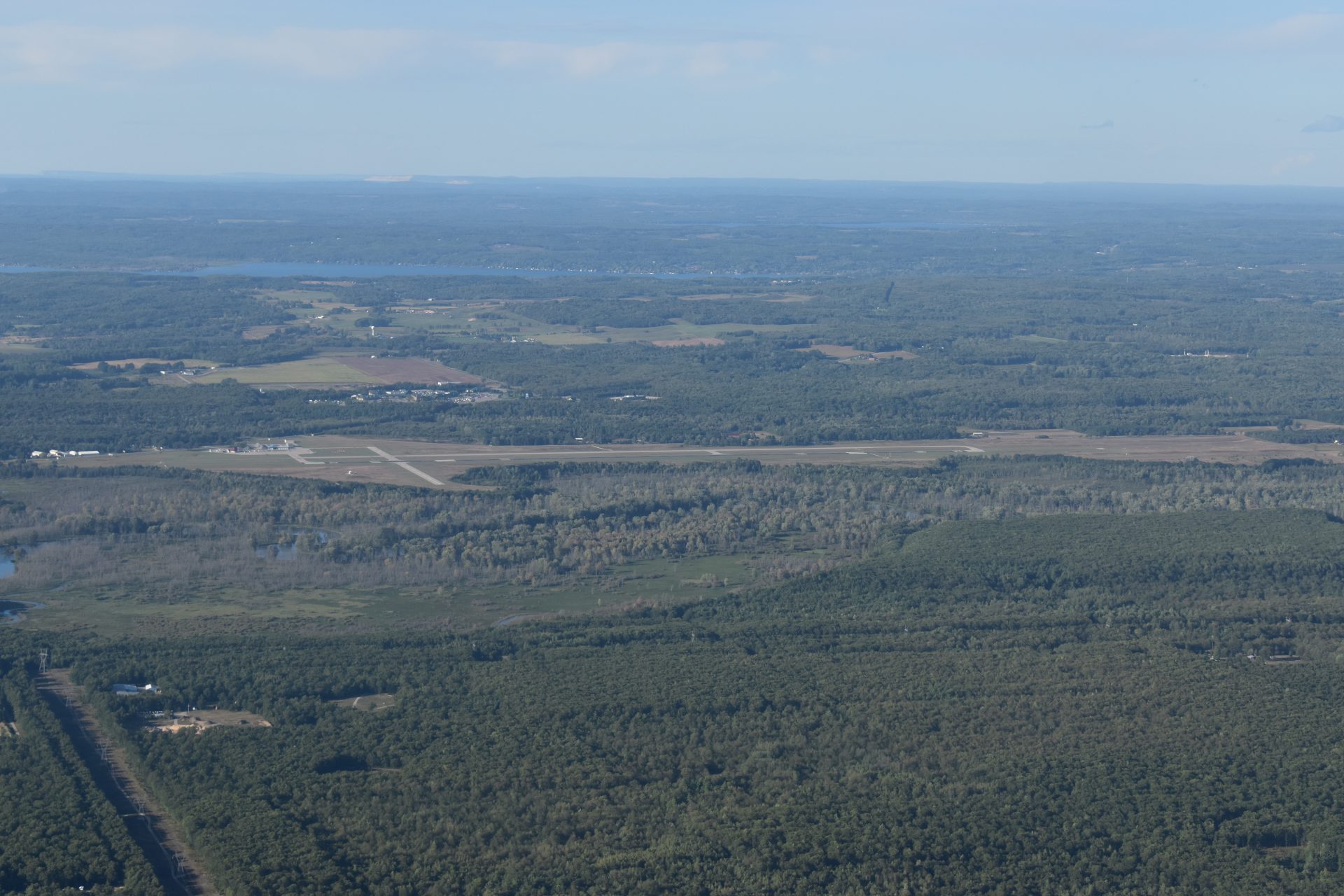 A view of Manistee County Blacker Airport from the window of the plane (Photo: AirlineGeeks | Joey Gerardi)

We turned for landing and smoothly touched down on the same runway I had started my journey from just four hours ago. 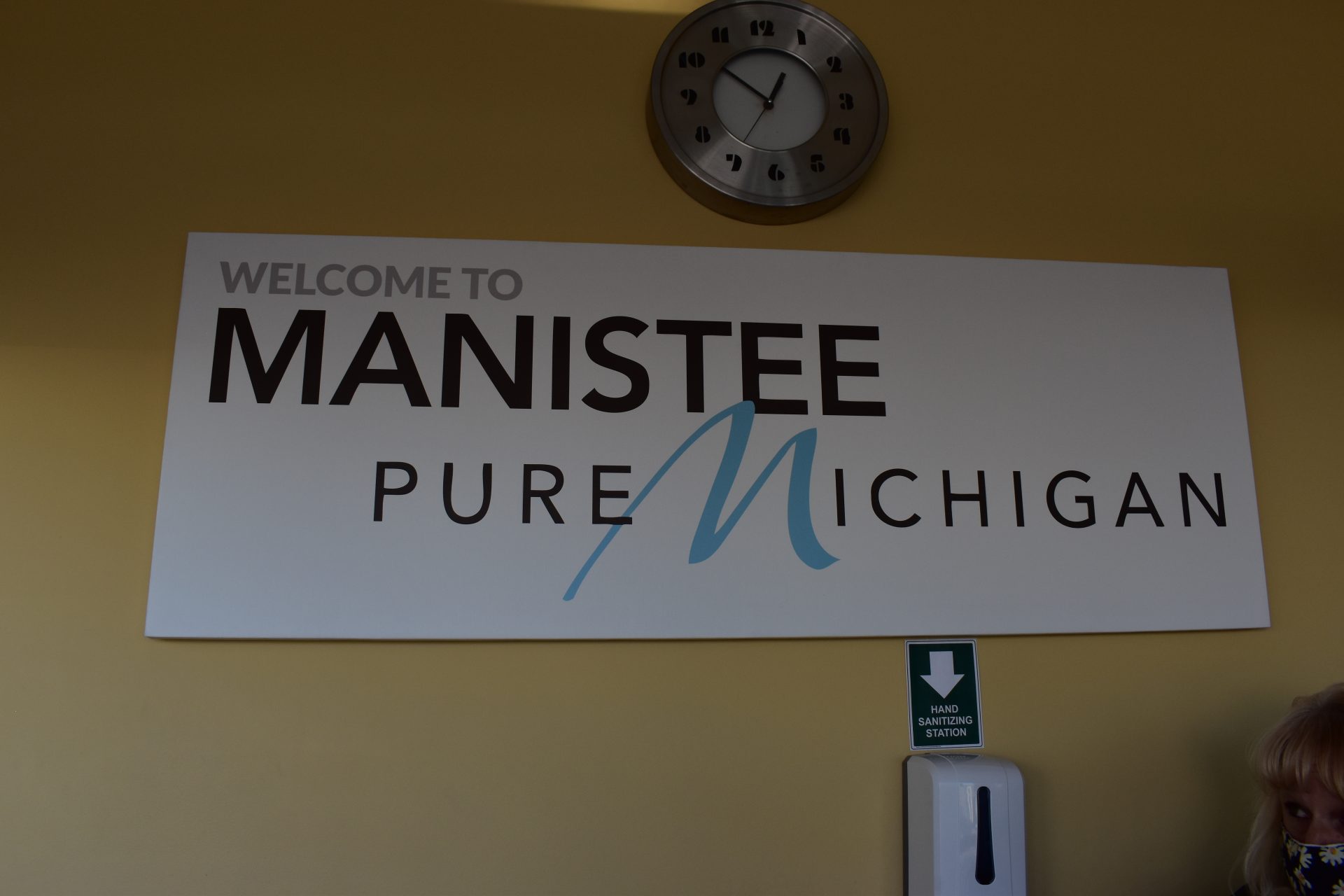 A sign welcoming passengers to Manistee as they enter the terminal from the aircraft (Photo: AirlineGeeks | Joey Gerardi)

After experiencing North Country Sky first hand, I understand why it would be a hassle for residents that needed to travel regularly. The inability to check bags further than Chicago; a lack of codeshares; inconsistent onboard service and accessibility; and fluctuating and inconsistent flight times and aircraft types made traveling inconvenient.

It was a true AvGeek experience that is no more. The airline’s last day in Manistee was Sept. 30, 2020 with Cape Air taking over the EAS contract the following day on Oct. 1, 2020. The end of service in Manistee also marked the last time the North Country Sky name would be used, as this was the carrier’s only flight. 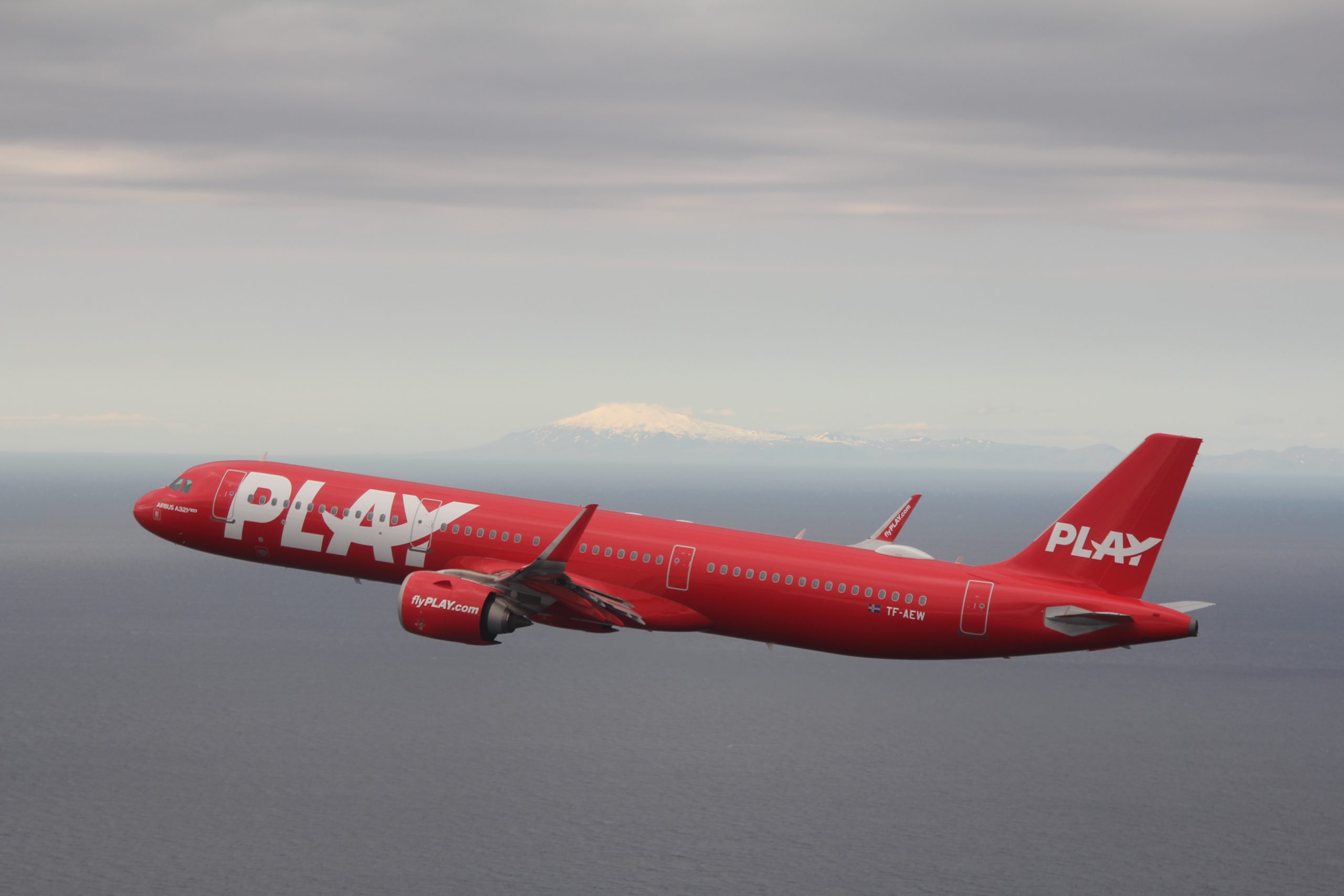 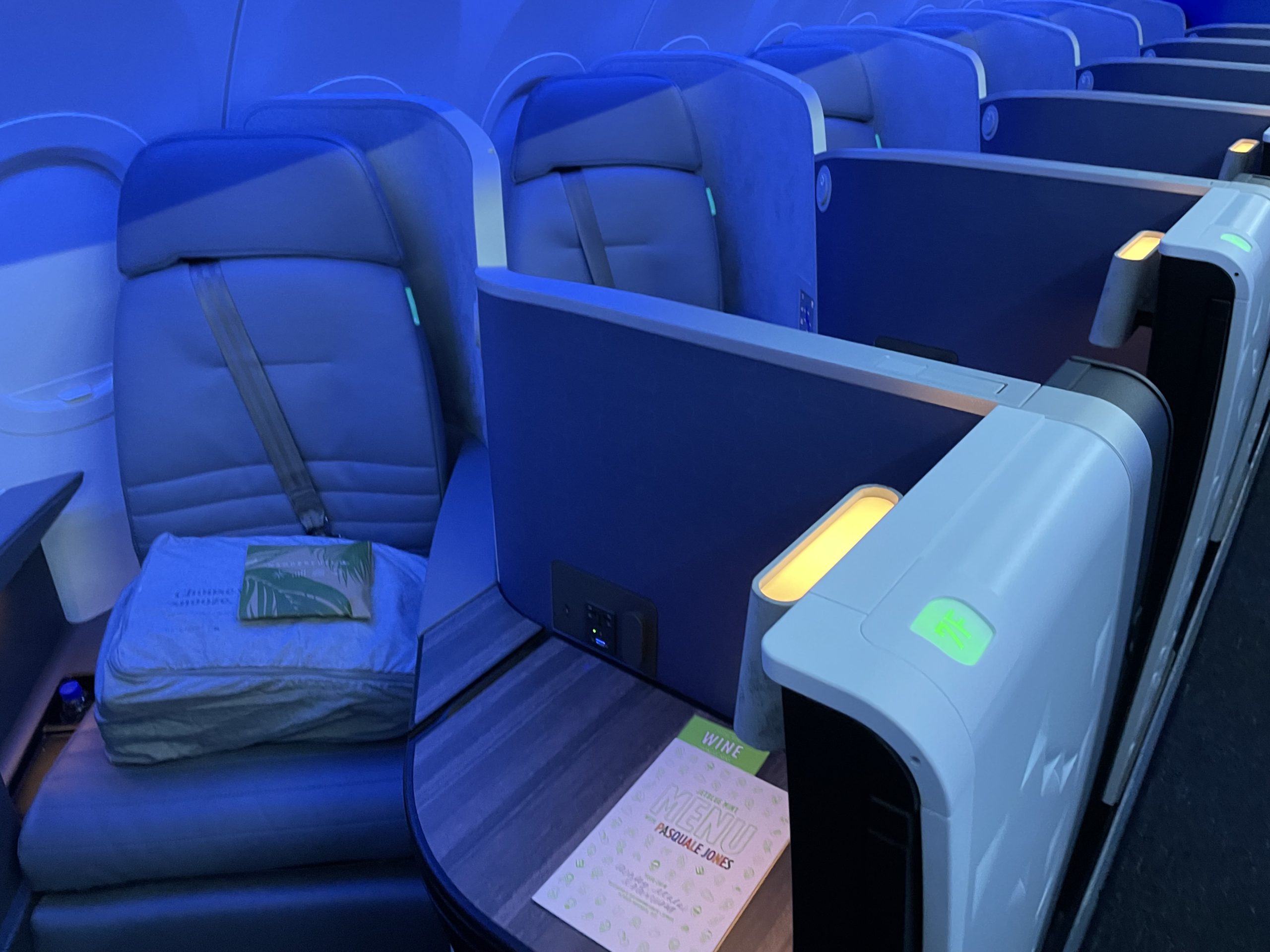