The arrival onto runway 25L by the Qatar Airbus A350-900 WXB — registered A7-AMF — at 9:50 a.m. was then greeted by a water cannon salute by the airport fire trucks to commemorate the occasion. 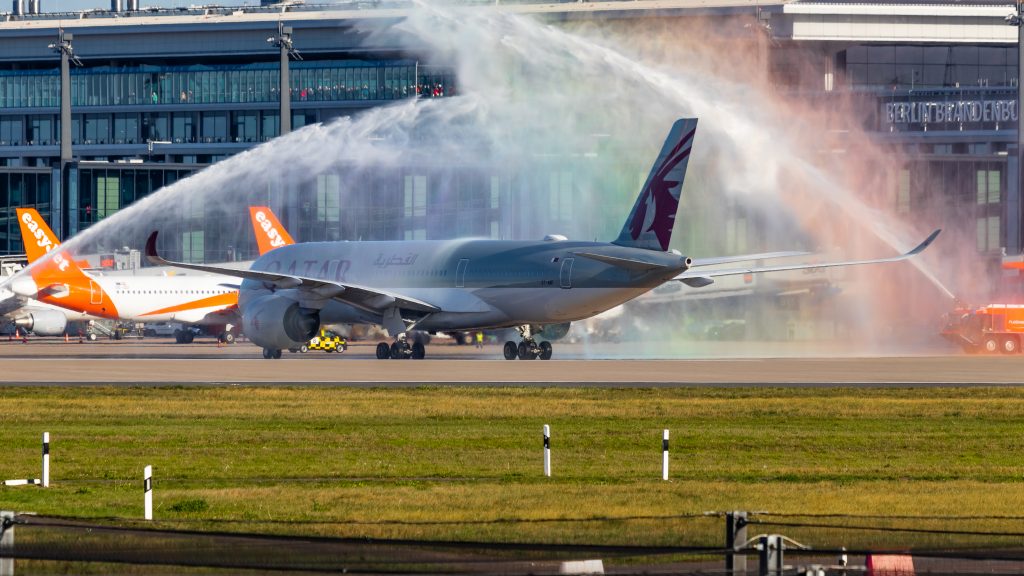 The last day of October brought an end to years of delays, controversies and cases of corruption that overshadowed the planning and construction of Brandenburg Airport. Now, after a successful opening that saw around 3,100 passengers on its first day, the airport will begin life as the airport representing the German capital with the two runways in full operation.

Bad weather during the opening day saw the original plan of the two biggest carriers — easyJet and Lufthansa — to land on the two runways at the same time canceled due to a low cloud base. easyJet planned to conduct a visual approach onto runway 25L while Lufthansa would land on 25R. However, the activation of the Instrument Landing System for 25L was not yet active, so a back-up instrument approach for 25L was not possible.

This change of plan saw easyJet becoming the first carrier to officially land at the new airport after a short flight from Berlin Tegel, with Lufthansa following behind after flying in from Munich.

This left the title of the first landing on the airport’s southern runway to Qatar Airways, which decided to change from the Boeing 787 aircraft normally used for Berlin to a bigger Airbus A350-900.

Speaking about the event, Qatar Airways CEO, Akbar Al Baker said, “I know it has been a difficult road to get here, and I think the wait has truly been worth it. We first began flying in Berlin in 2005. Gradually growing the route as it became one of our most popular destinations. While we had to temporarily suspend services due to COVID-19, our commitment to Berlin and to Germany has remained as strong as ever.”

Although this is officially the first landing at Brandenburg’s second runway, the Qatar Airways A350 is not the first aircraft to have landed on the runway itself. In the summer of 2018 runway 25R, the normal runway at Berlin Schonefeld Airport — now renamed Terminal 5 — located to the north of Brandenburg Airport, underwent extensive runway works, causing aircraft flying in and out of Schonefeld to taxi to Brandenburg’s newer southern runway, causing taxi times to be almost double than normal, sitting at around 20 minutes during peak season.

Also, the Berlin ILA Airshow, held every two years, has been using the southern runway for the past couple of airshows. The airshow was due to go ahead in May this year but the pandemic caused it, like many other events across the world, to be canceled.