After departing from Manistee County Airport, we continued our climb through the clouds to our cruising altitude of 6,000-Feet. 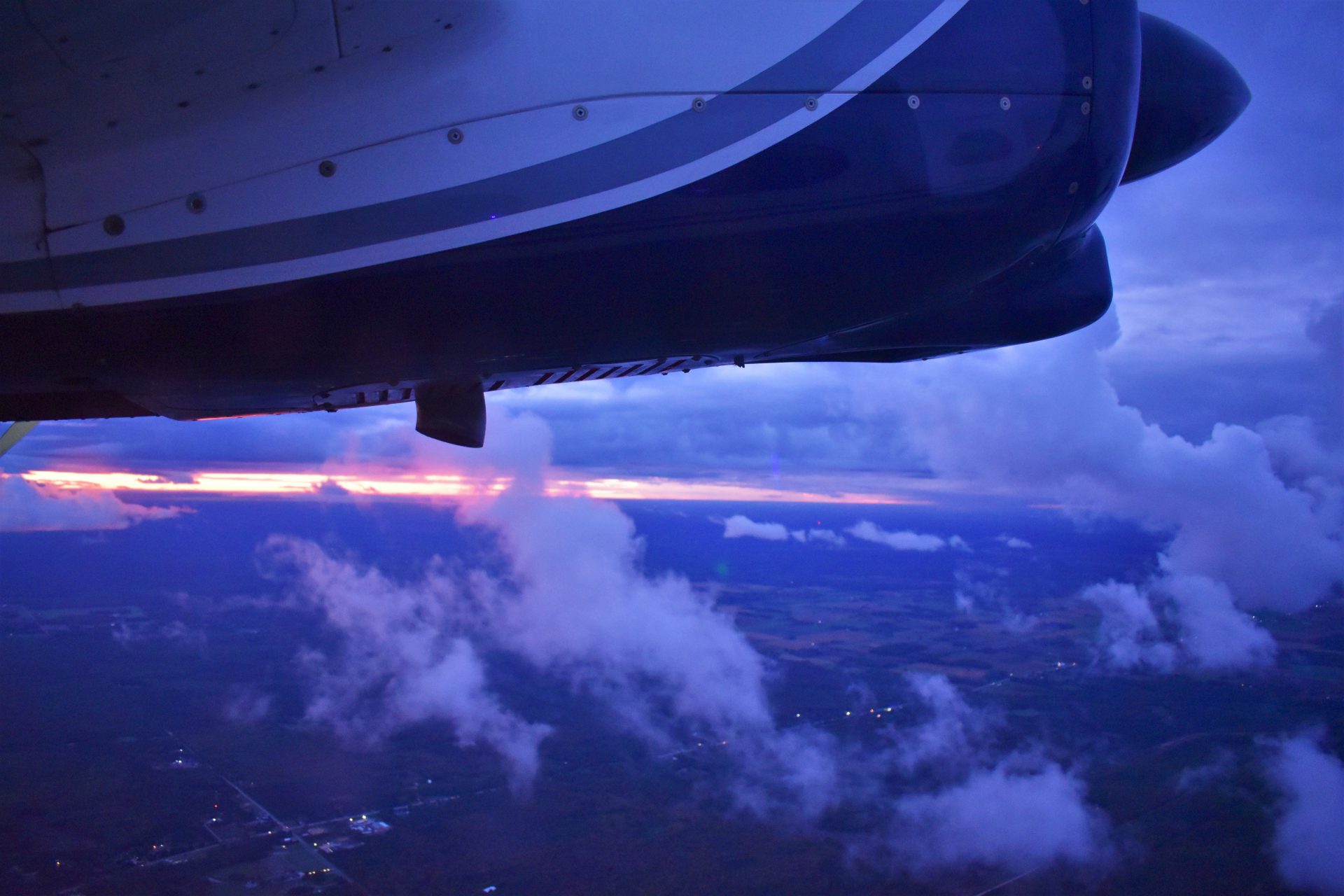 Just after departing on the first Cape Air flight out of Manistee (Photo: AirlineGeeks | Joey Gerardi)

Unlike my flight onboard North Country Sky’s Beech-1900C, this aircraft went directly over the water. Although due to the low cloud layer I was unable to see the west Michigan coastline or the water for the majority of the flight. 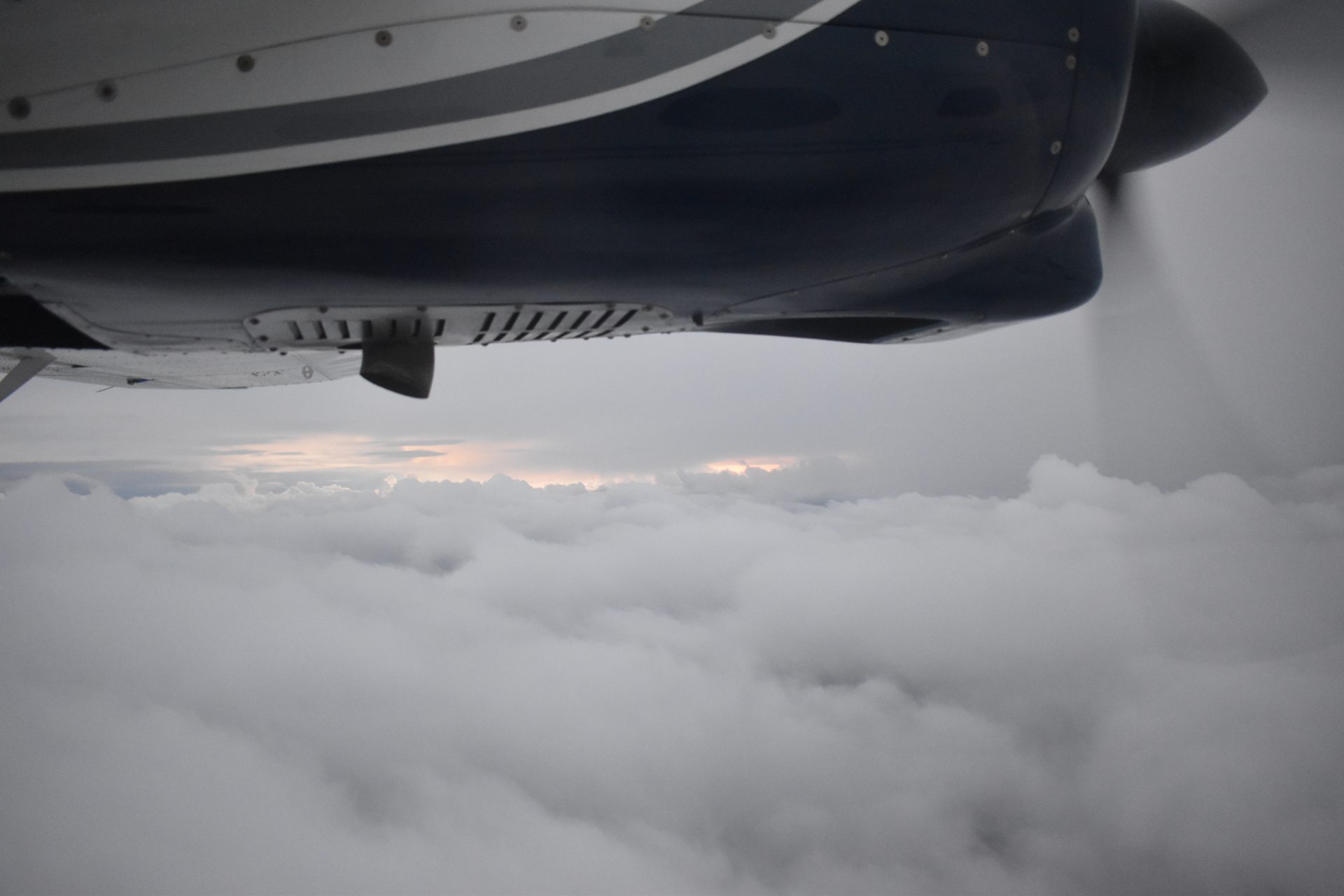 I would have been completely clueless about our whereabouts during the flight, but fortunately I was able to see the Garmin navigation screen from where I was seated despite being in the third row of the aircraft. 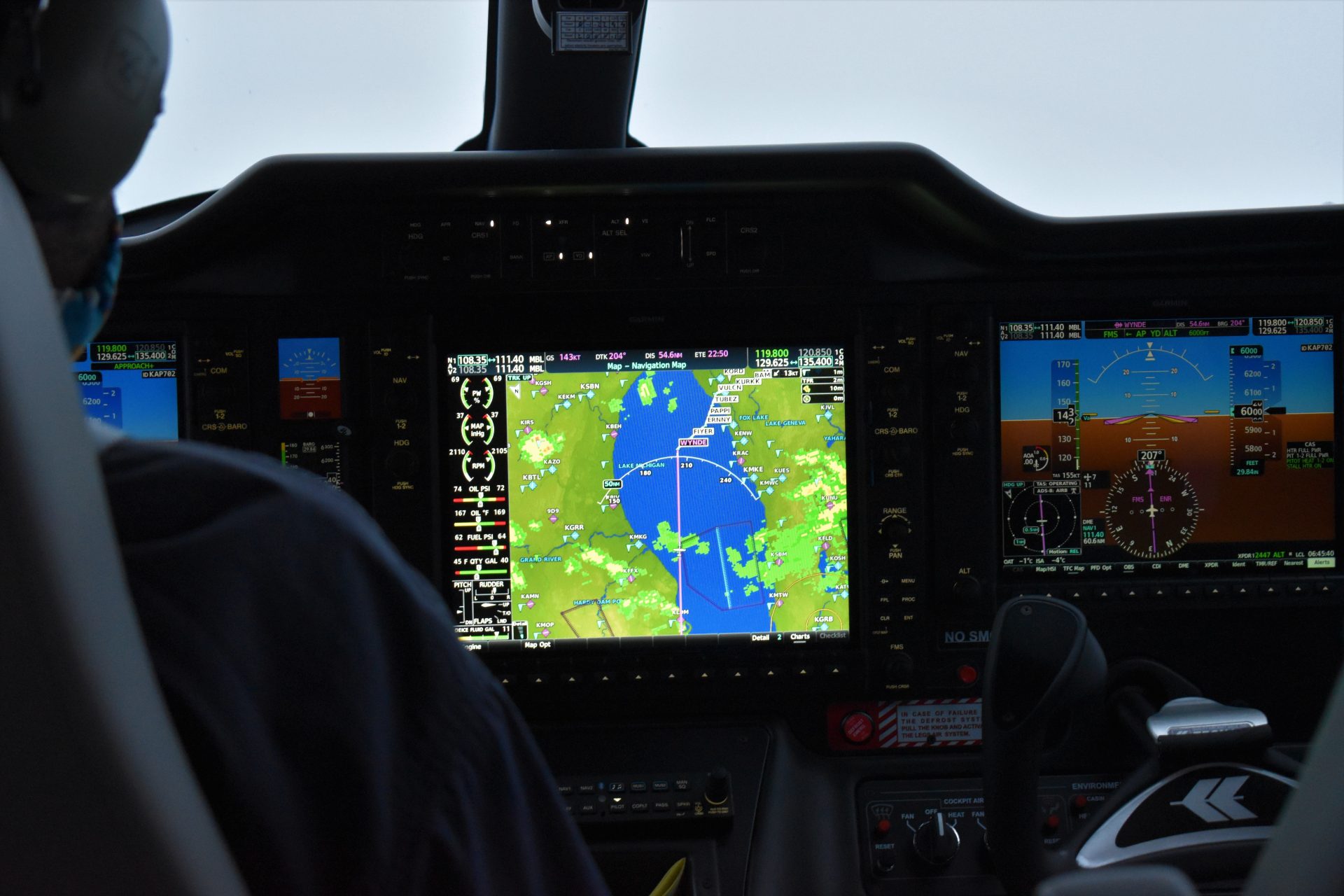 The navigation screen, clearly visible from my seat in the cabin (Photo: AirlineGeeks | Joey Gerardi)

Roughly halfway through the journey to Chicago, the sun finally popped out from behind the clouds and gave way to some beautiful colors. Not more than 10-minutes after that the clouds finally dispersed and I could see Lake Michigan below. 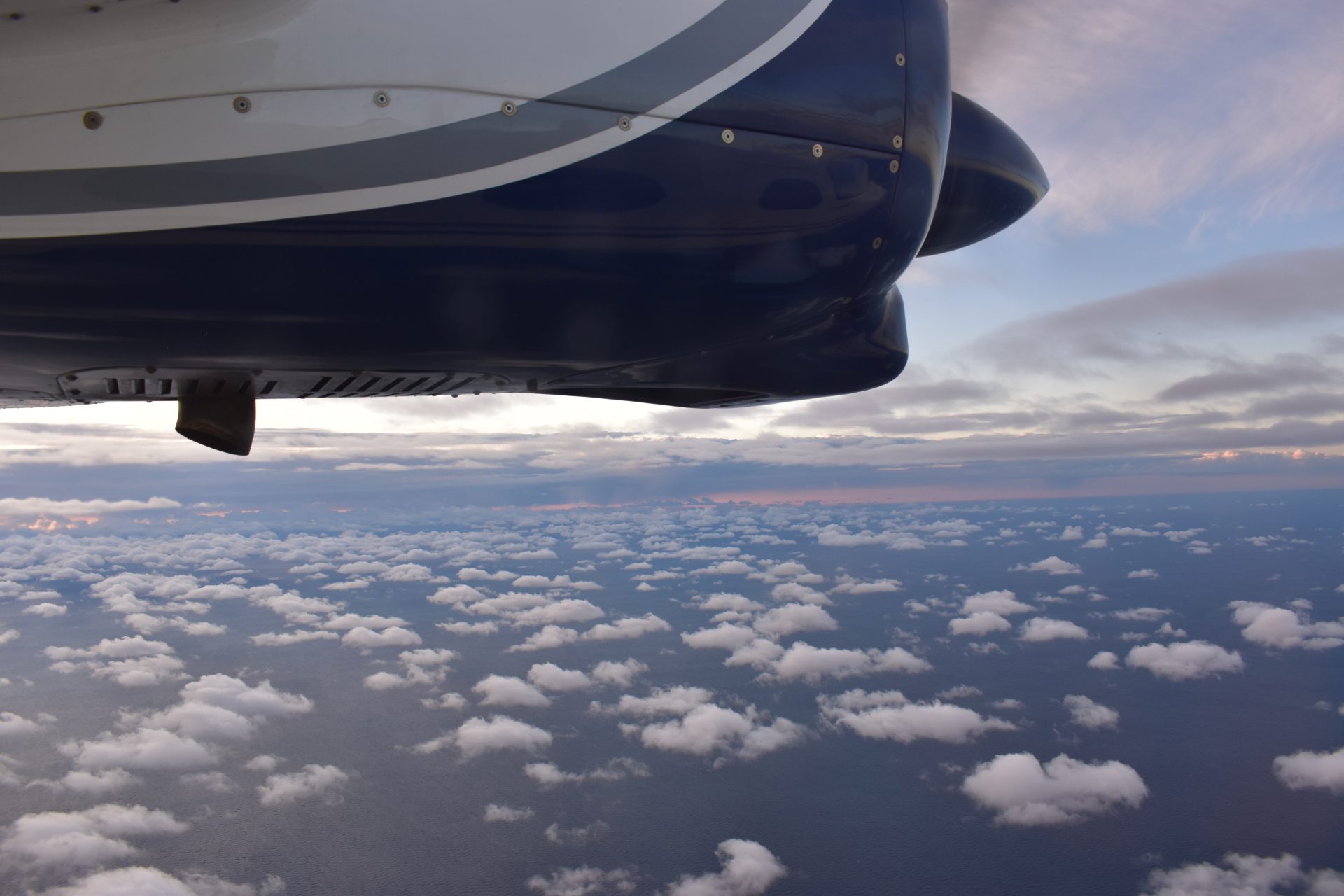 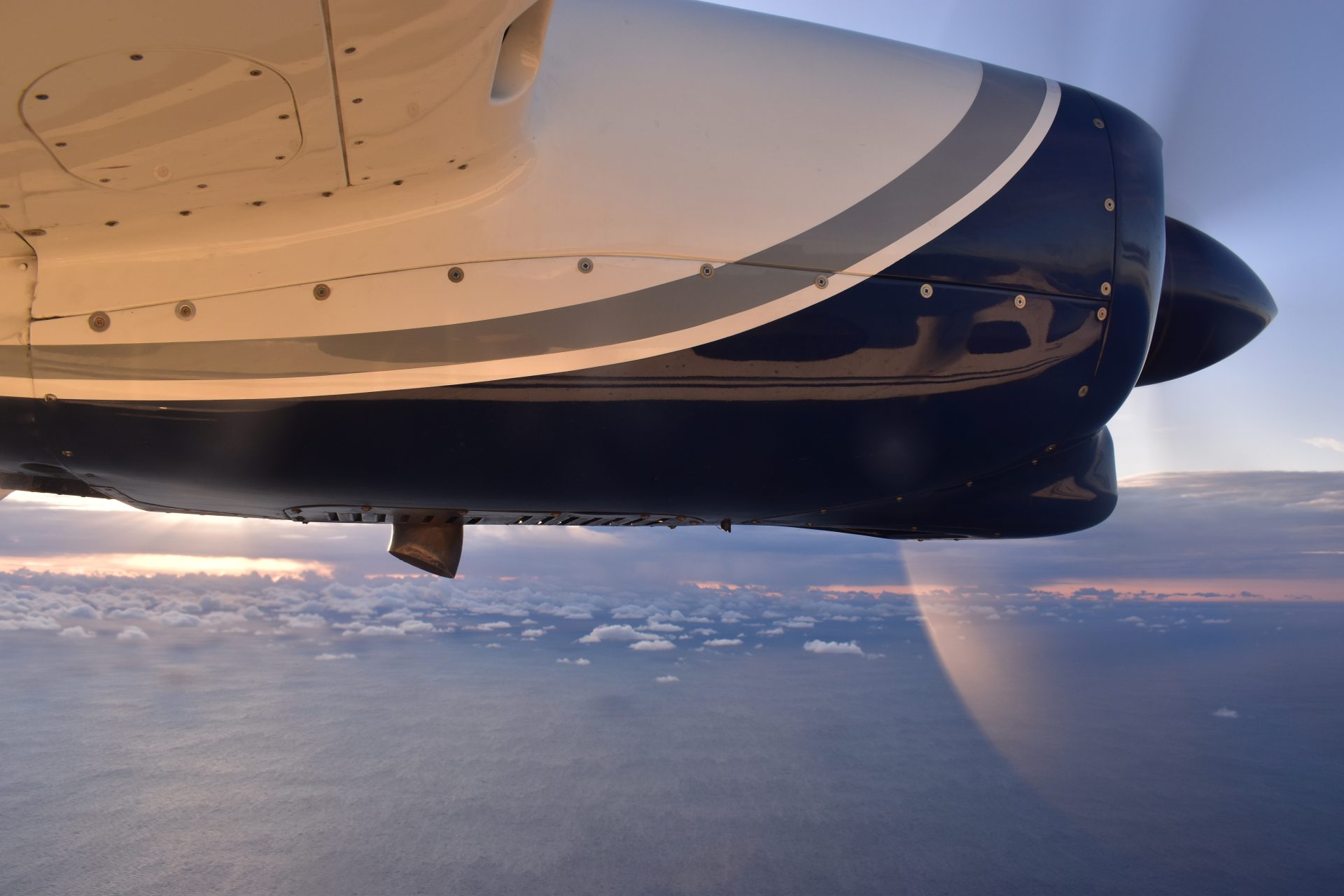 The reflection of the aircraft seen on the engine (Photo: AirlineGeeks | Joey Gerardi)

This is something not seen to often on high winged aircraft, the ability to see the aircraft’s reflection is another sign of not only how new the aircraft is, but the type as a whole. Cape Air was the launch customer for this Tecnam P2012 Traveller.

As we came closer to Chicago, I began to see the city skyline out of the cockpit window, another unique feature of these smaller aircraft. 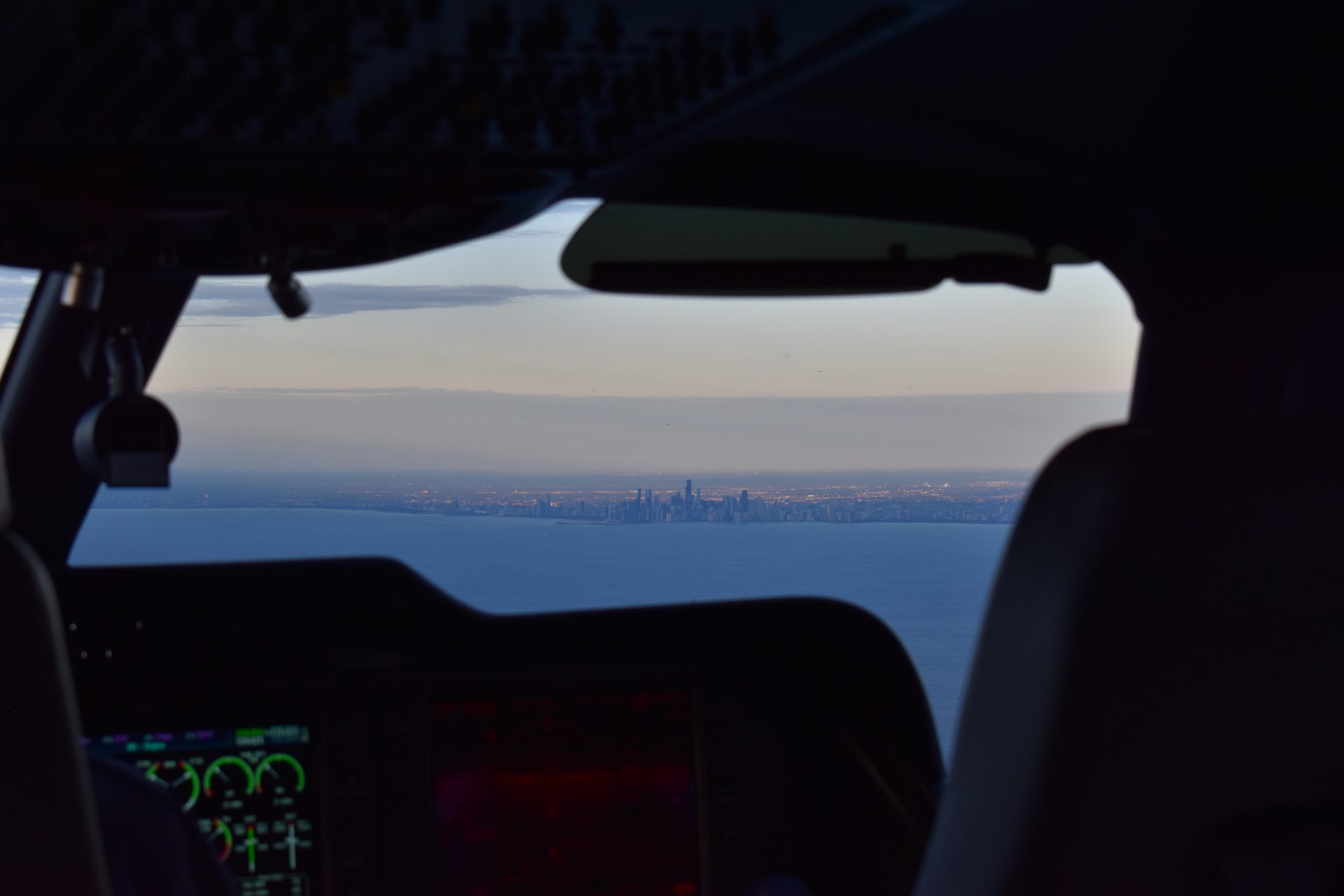 The Chicago skyline coming into view, as we approach our destination (Photo: AirlineGeeks | Joey Gerardi)

As we passed over the shoreline we were already lined up to O’Hare’s runway 27R. Passengers on the left side of the aircraft were also able to see two larger jets in the distance that were almost parallel to our aircraft, although they were going much faster. 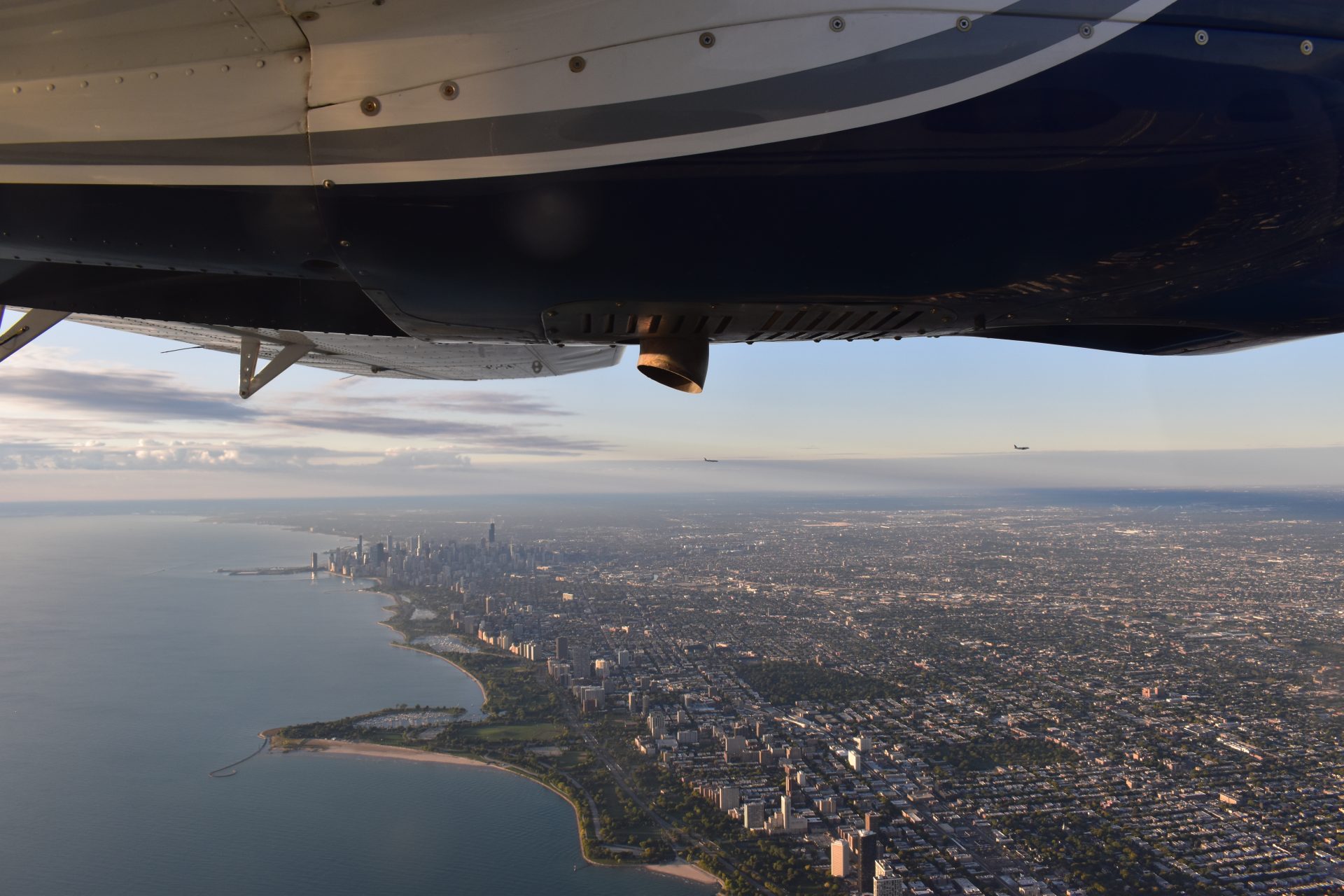 On final, all passengers became able to see the runway we would be landing on out of the front cockpit window. 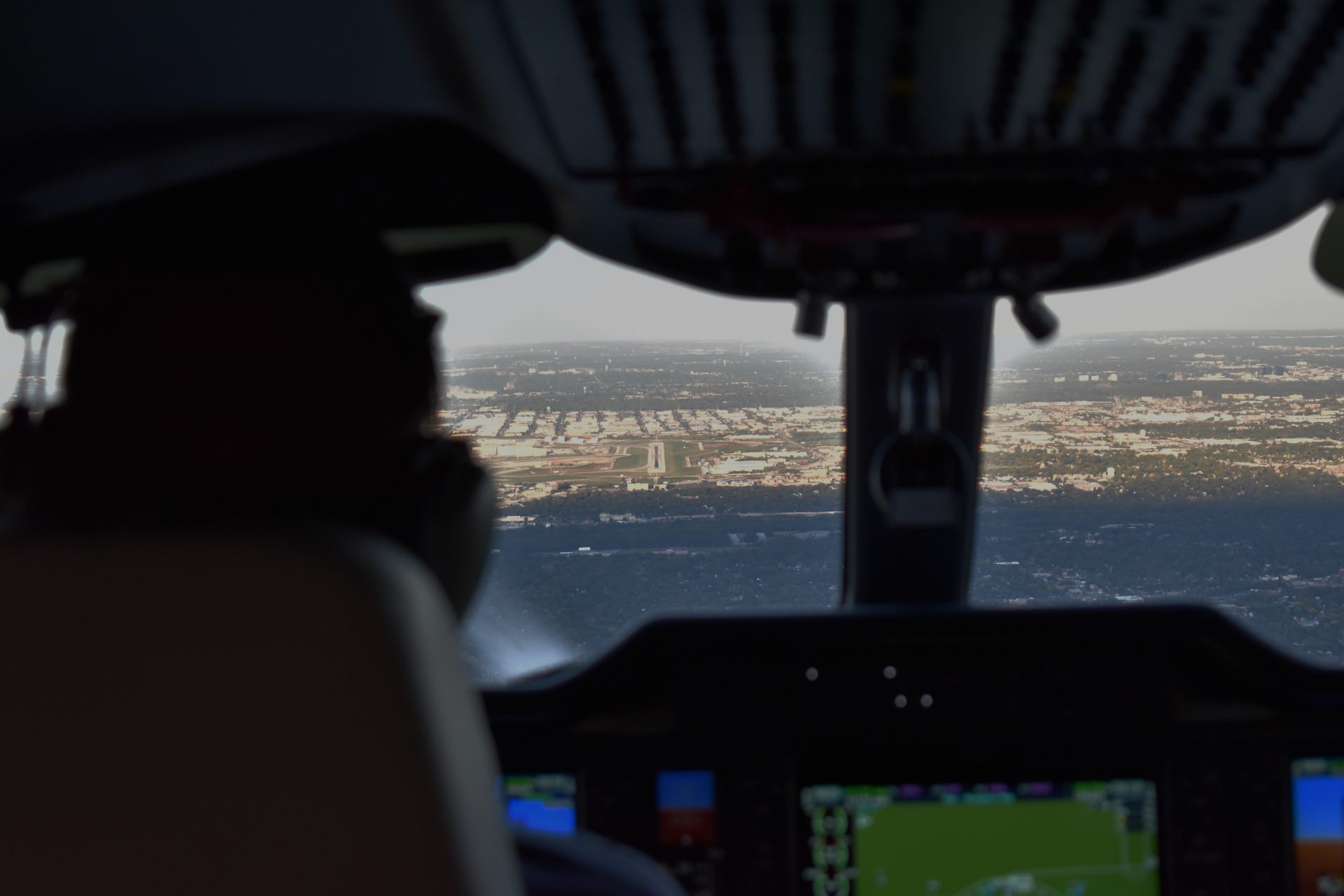 A view of runway 27R from the cockpit window (Photo: AirlineGeeks | Joey Gerardi)

We landed on the runway at 7:28 in the morning, one-hour and nine-minutes after departing from Manistee, the flight took almost 20-minutes longer than the previous flight on North Country Sky’s Beech-1900.

Between Michigan and Chicago, we crossed west over a time zone border from Eastern Standard to the Central Time Zone, meaning flights from Michigan to Chicago have the unique ability to travel back in time. That is if you’re going fast enough, only flights that take under an hour have the ability to do this, and due to our one-hour and nine-minute flight, we weren’t able to accomplish this.

After a roughly 10-minute taxi, we arrived at Gate L11A, this gate is where Cape Air, as well as Boutique Air and Air Choice One, park smaller propeller aircraft. Upon walking out of the plane, I was able to grab a picture of the magnificent looking cabin on the brand new Tecnam P2012 Traveller. 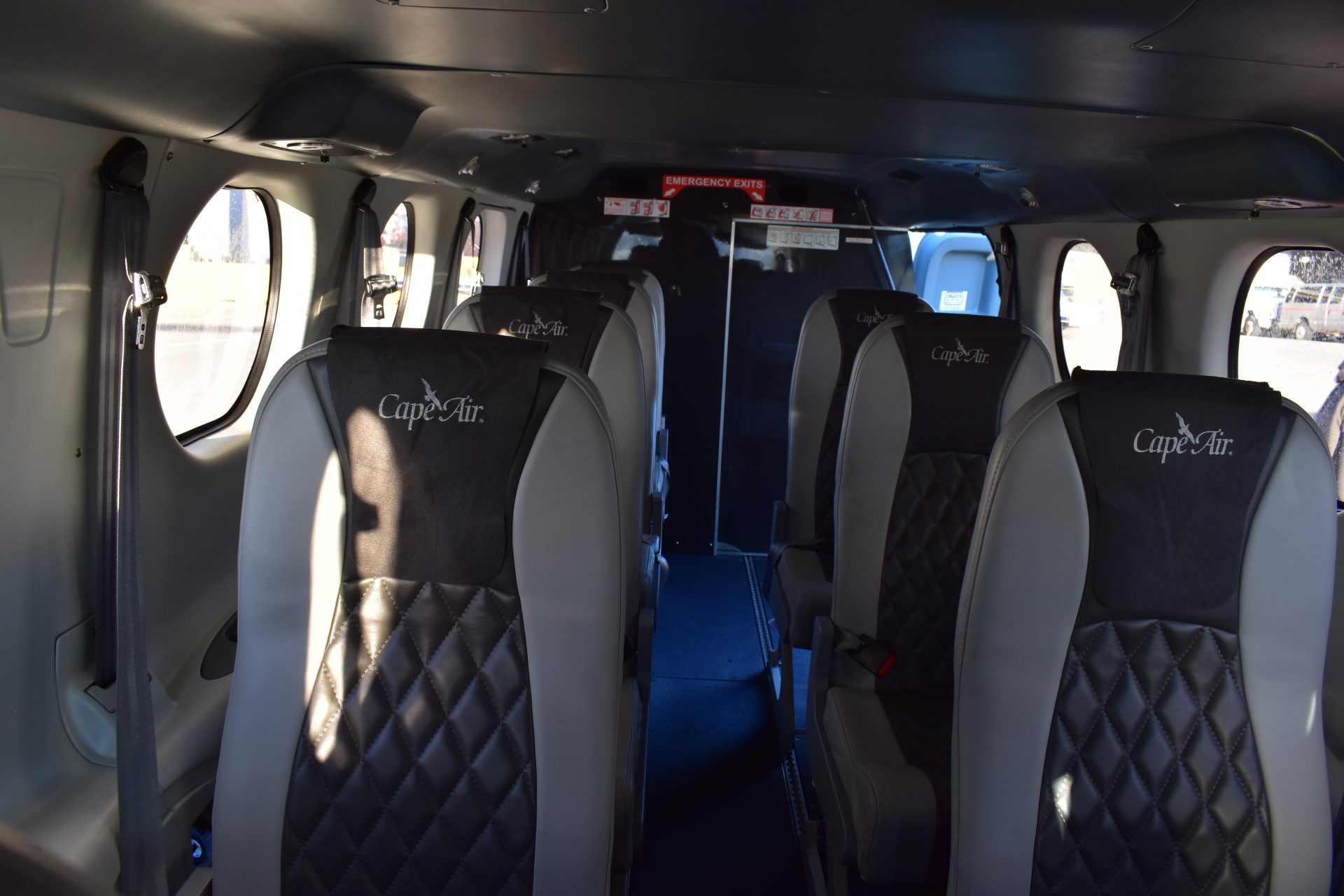 Rather than a jetway, after walking out of the aircraft, passengers are led to a stairwell which leads them directly into the main terminal. Gate L11A is located in a part of the airport that predominantly houses American Eagle and their regional jets, in addition to a few Spirit Airlines gates.

After walking into the terminal, I decided to head to eat some breakfast as I wait for the return flight back to Manistee. 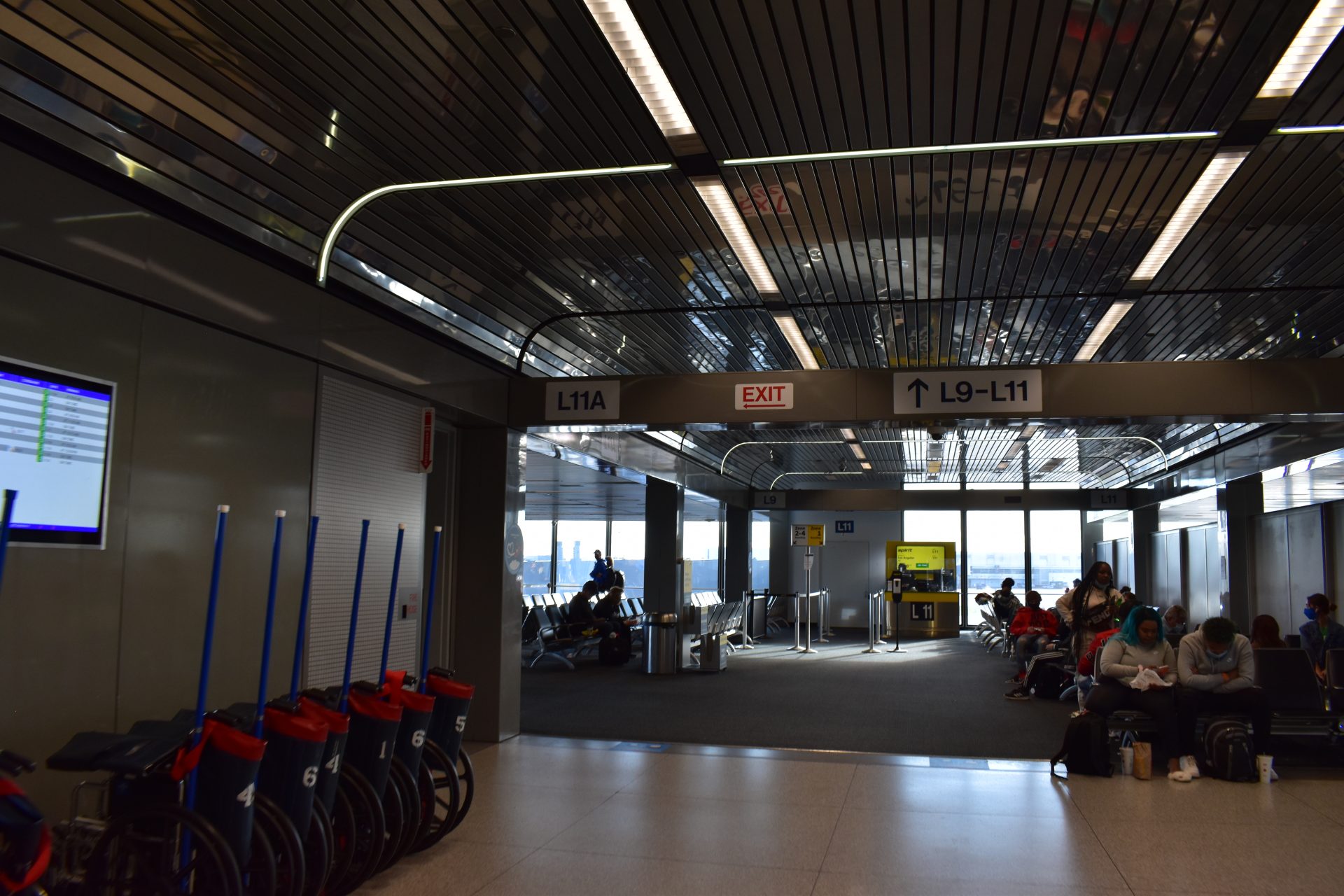 Gate L11A, at the end of the terminal (Photo: AirlineGeeks | Joey Gerardi)

After some breakfast, I headed back to the gate to get my boarding pass for the return flight to Manistee. Although I wasn’t the first to check-in this time, I was still excited to see what they would do for the first arrival into Manistee. 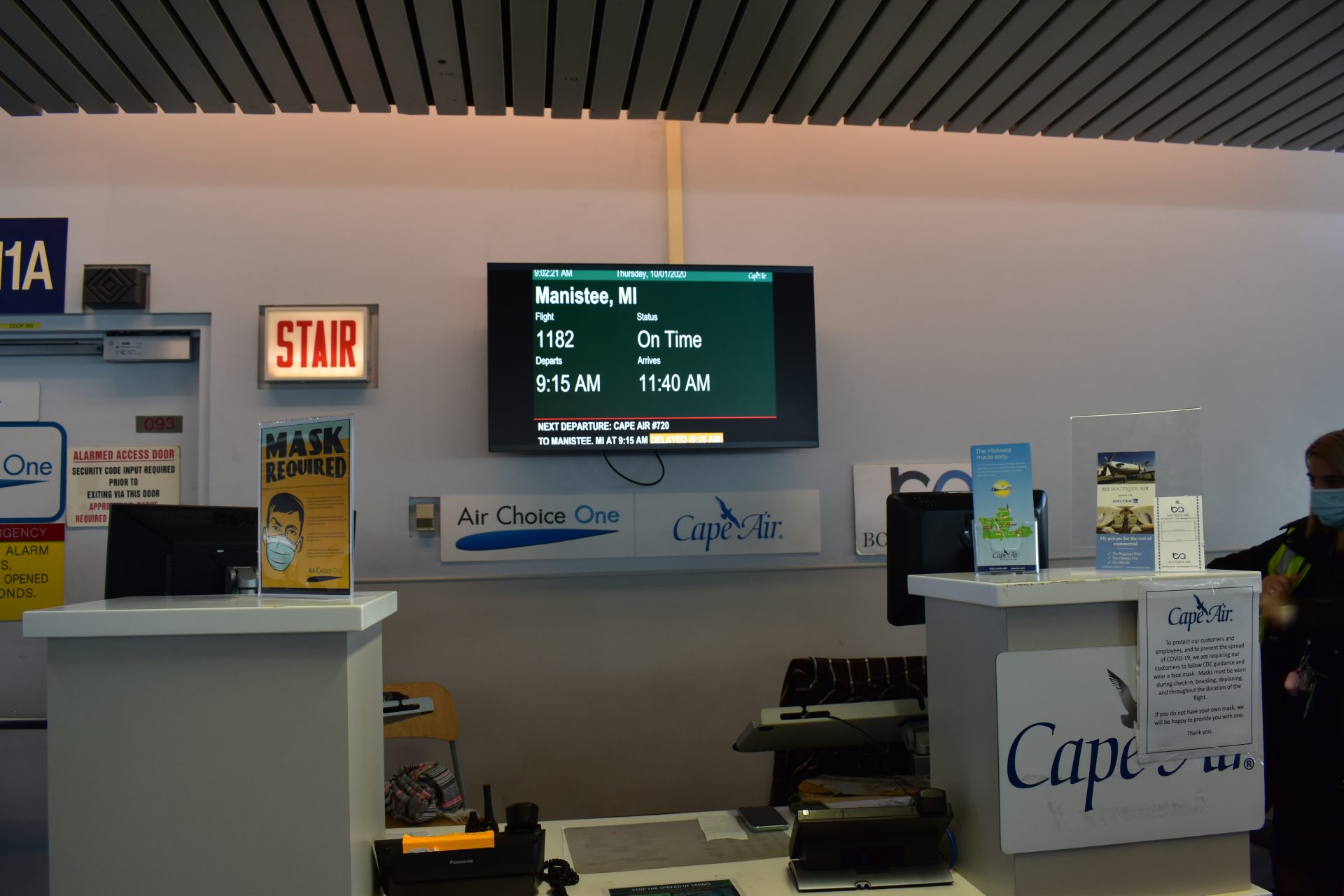 The flight was called and we headed out, just like every other airline flight at Chicago, with the added bonus of not having to use a jetway.

The two engines started up, and we pulled out of gate L11A, as we taxied to the runway it was amazing to see the size comparison of this smaller aircraft compared to jets. 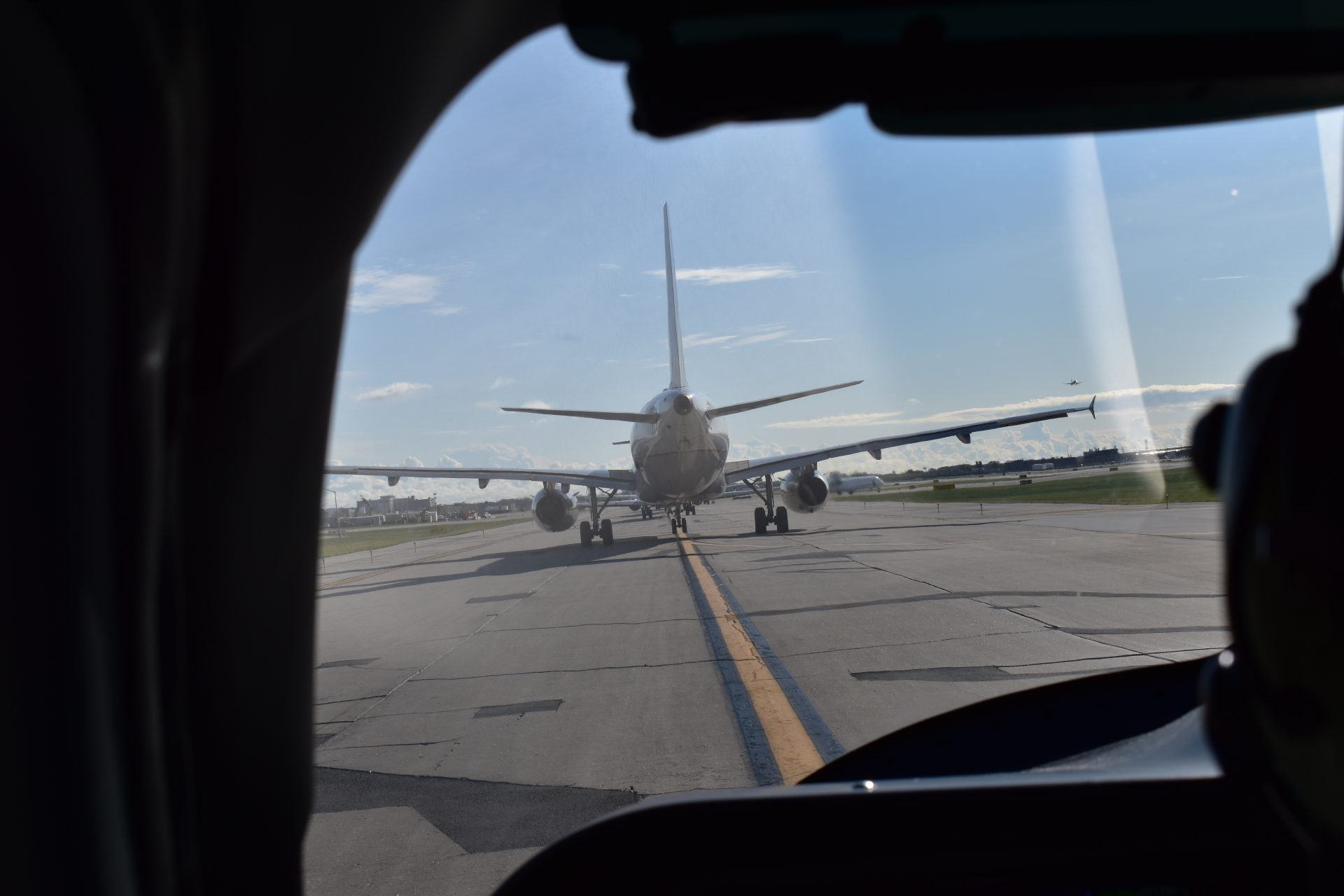 Behind some relatively larger aircraft, while taxiing to the runway (Photo: AirlineGeeks | Joey Gerardi)

After abound 10-minutes of holding, we took off from Chicago O’Hare and headed directly east to the middle of Lake Michigan before then turning north and slightly west. There was some weather over the lake, which accounted for the odd flight path. 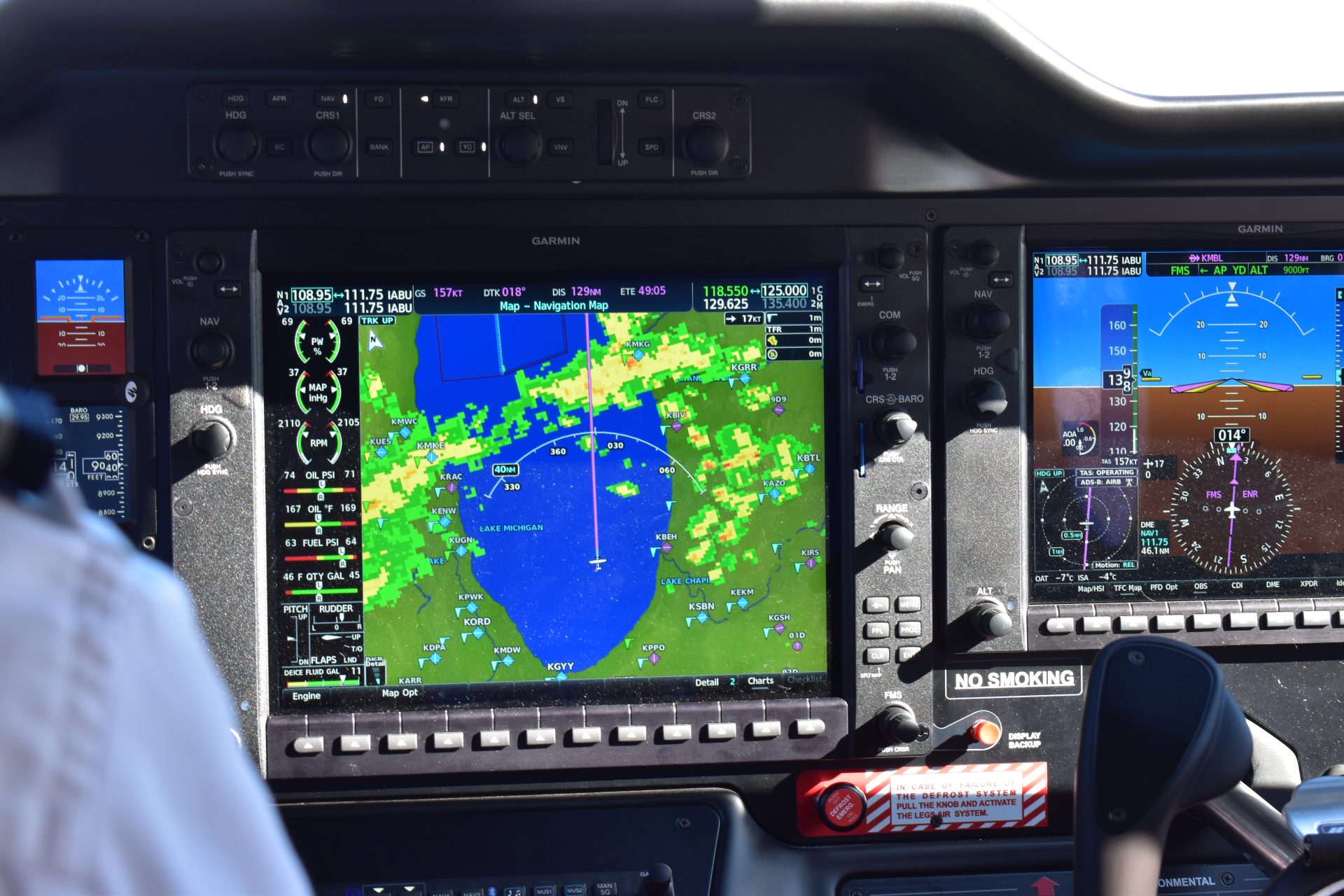 The rest of the flight progressed normally, although due to the long routing around some weather the flight took almost an hour and a half. Despite the rain and clouds en-route, the flight was relatively smooth for a propeller aircraft. There was also a bit of wind on approach to Manistee, but it wasn’t anything the pilots couldn’t handle 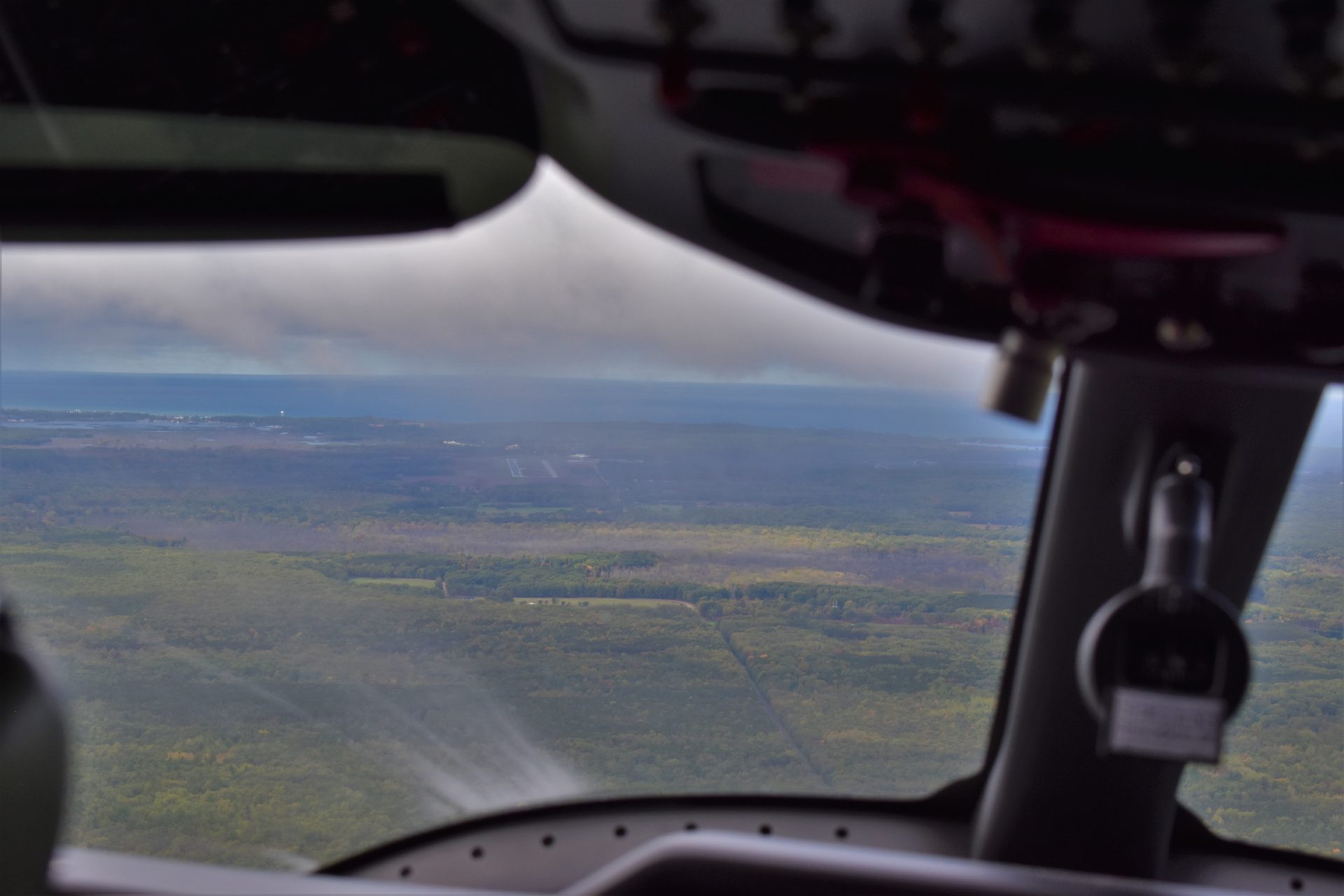 Upon getting off of the aircraft, every passenger was given a brownie which was from the same store as the goodie bag from the morning. 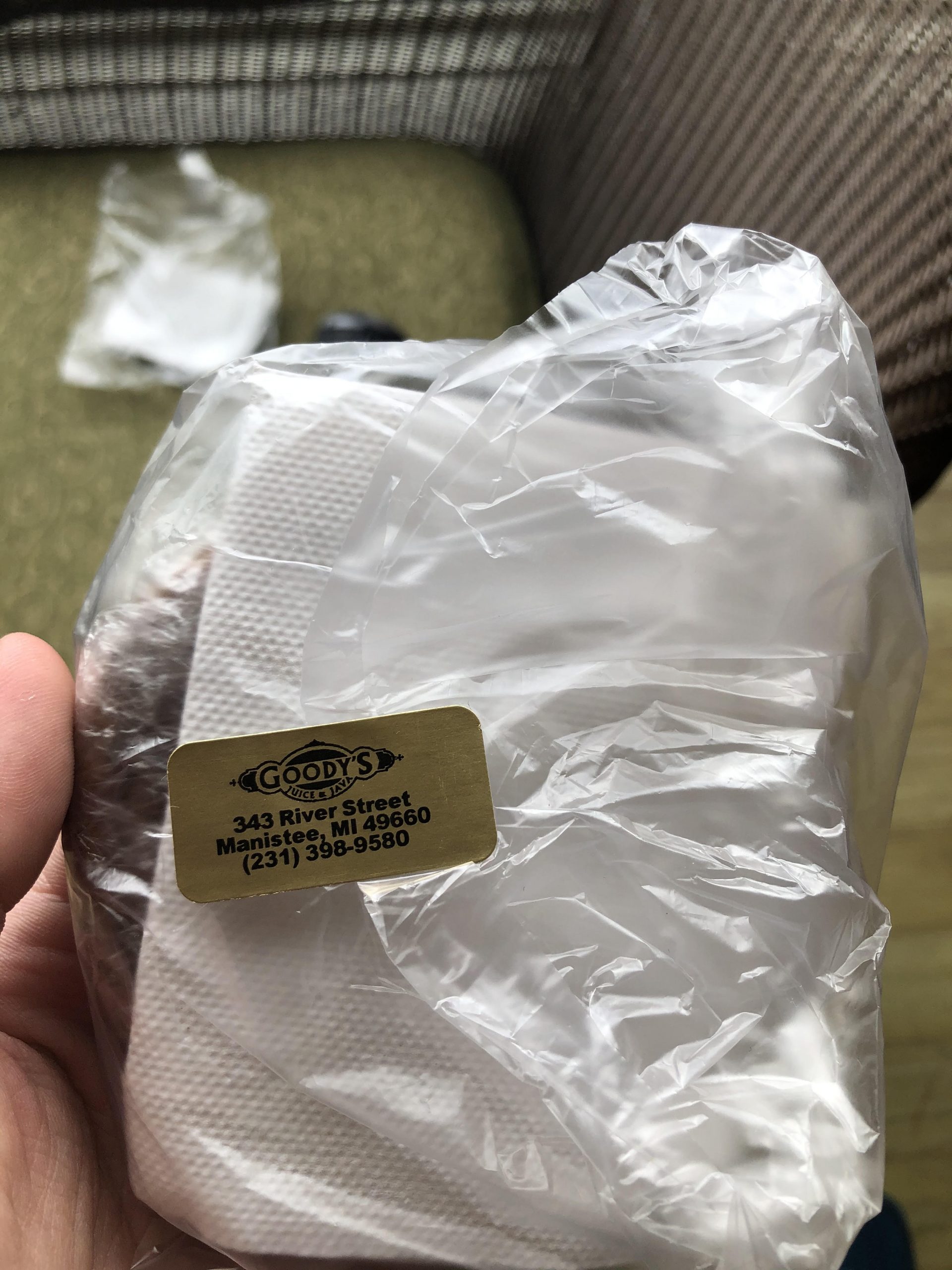 A brownie was given to every passenger on the inaugural arrival into Manistee (Photo: AirlineGeeks | Joey Gerardi)

Time to reflect on the advantages and disadvantages of the new Cape Air service versus the pervious service I experienced on North Country Sky.

Cape Air service is much more consistent in terms of flight schedules, with most scheduled arrivals and departures happening around the same time every day, versus the previous carrier whose schedule was quite sporadic and unpredictable.

Cape Air also has agreements with American and United so passengers can check bags in Manistee and they will go al the way to their final destination or vise versa. With North Country Sky they had no interline or codeshares so all check bags must be re-checked when changing airlines.

As is the case with any airline, when problems arise they swap aircraft to keep flights as close to on-time as they can, but in this case, you would be going from the Tecnam P2012 to the carrier’s cramped and much less comfortable Cessna 402.

While the Tecnam P2012 is the aircraft flights are scheduled to operate on out of Manistee, stuff does happen and aircraft do get swapped sometimes. A number of the flights to Manistee since the inaugural flight have been swapped to the Cessna 402. It is never fun when any flight gets delayed, but it would be even worse for the first flight out of a new city to get delayed, which is probably why the airline had a Cessna 402 sitting in Manistee the morning of the flight, just in case. 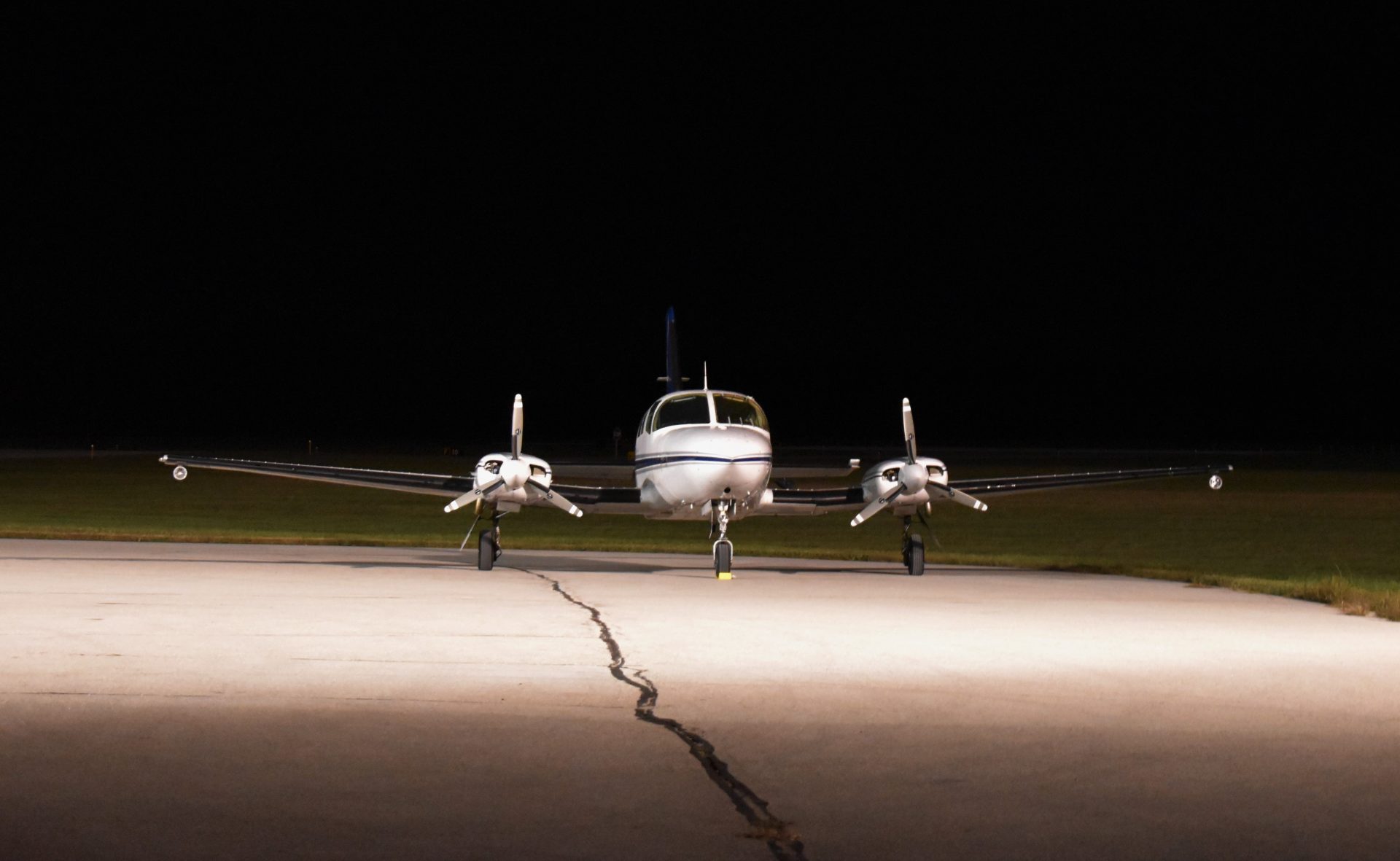 Service on Cape Air’s brand new Tecnam P2012 is slower than the Beech-1900C and obviously much slower than the Dornier Jet, and the Cessna 402 being the slowest of the four aircraft. Despite the slower ride, I didn’t mind it as the cabin was comfortable on the Tecnam.

Even if you don’t book one of the codeshare flights to United or American, Chicago O’Hare has a lot more nonstop destinations than Chicago Midway. Pre-Covid, Chicago O’Hare is one of the few airports in the world to have the distinction of operating non-stop flights to six continents, meaning you can fly from small-town Manistee, Mich. to Africa and Australia with only one stop.

Despite the disadvantages, Cape Air will be a welcomed addition and change for the community of Manistee.

A video account of the journey can be viewed below;