Even as U.S. commercial airline traffic continues to sit at less than half of 2019 levels, a number of airlines have taken the opportunity to open service to new markets, grabbing unused slots and gates left behind by other airlines. Much of this activity in the U.S. has been centered around domestic airlines adding routes from smaller U.S. cities to leisure destinations to allow better connectivity for those looking to get away but stay safe when not at home.

American Airlines launched routes including Kansas City to Cancun. United Airlines added over a dozen new flights, including one from Denver to Belize City, Belize. And nearly every U.S. airline increased frequencies to destinations in Florida and southern California.

But while the domestic and short-haul international markets have shown signs of life, the long-haul international market has floundered more than any other. Airlines both U.S.- and internationally-based have slashed hundreds of frequencies crossing the globe as countries have restricted who is allowed to come and go, with many carriers cutting either all or a vast majority of their route networks.

Doha-based Qatar Airways has taken pride in operating a larger portion of its international schedule, more than most other major carriers. And without a vast domestic route network like that of U.S. airlines for it to fall back on, it didn’t have many other options to continue to make money.

But as it’s operated that strong network, the airline has also begun to see new opportunities to launch flights. In October 2020, Qatar Airways added San Francisco as its newest destination, kicking off service on Dec. 15. A week before the flight even started service to the city, it announced service to another West Coast giant, Seattle, in conjunction with a new partnership inked with Seattle-based Alaska Airlines.

Initially, that route was slated to begin on March 15. But as the first few weeks of San Francisco’s service came to a close, the airline realized it was seeing huge success that even it might not have expected just a few months prior. So Qatar Airways made the decision to launch service to Seattle as quickly as it could. The first flight — operating under the flight number QR719 — touched down in Seattle at 11:20 a.m. on Jan. 29. The return flight — QR720 — left at 4:05 p.m. local time. 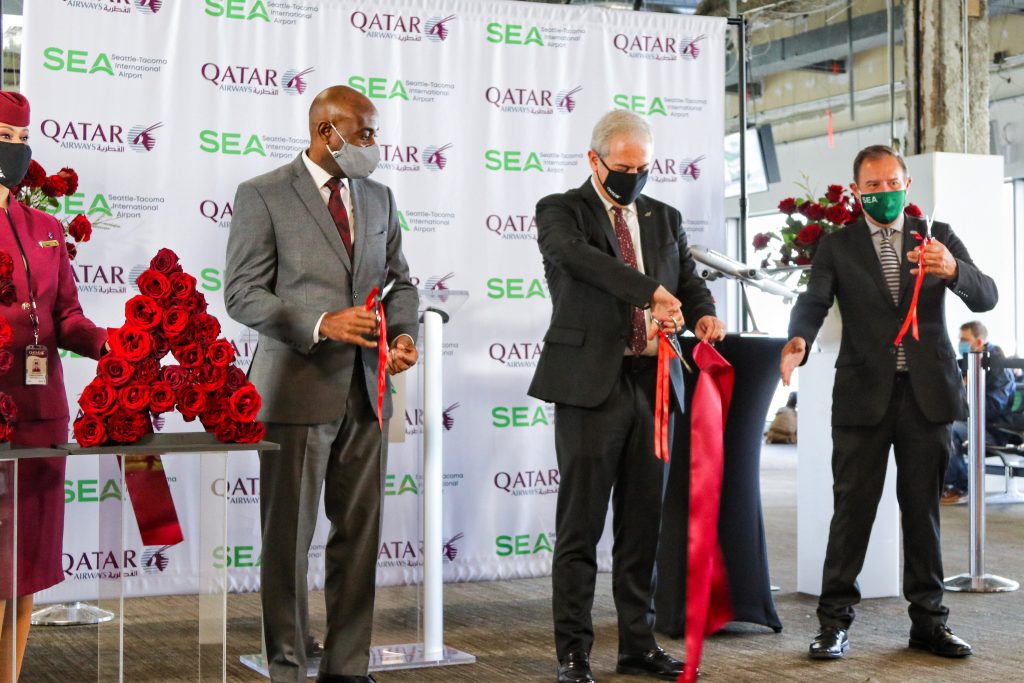 “This is truly, truly an exciting day for our airport, for our region, and for global businesses and international travel,” Seattle Port Commissioner Peter Steinbrueck said. “We are terrifically excited. Today’s launch of a new service with Qatar Airways signals the return of robust air travel and better days ahead.”

“We began service to San Francisco in the middle of December, and it has been an incredible success for us,” Drusch said. “So with that success in San Fran, we said, ‘We should be able to replicate that success in the largest city on the West Coast we don’t service yet. Let’s go for it with Seattle.'”

Drusch added that the airline’s partnership with Alaska Airlines contributed to its decision to launch sooner because Alaska brought a large network of connectivity to get customers to and from Seattle from across the U.S., streamlining trips for the airline and for passengers.

“As we accelerated our discussions with Alaska and came to agreements with them on partnering, we said, ‘Let’s begin the service because we’ve got the best partner on the West Coast, and in particular in Seattle to help support the service and help bring customers to Seattle as a gateway,'” Drusch said. “It all coalesced. It was a nice alignment of activities.”

The airline had originally planned to operate the flight with an Airbus A350-900 aircraft, which it uses for most of its other flights to the U.S. But moving forward, Seattle looks to be slated to receive a Boeing 777, which Drusch said is a testament to the route’s early success.

“It’s because the demand picked up so quickly that it warranted putting the 777 in there,” he said. “Our flight out [on Jan. 29] requires a 777 to handle the load. Airline scheduling is a very dynamic practice, and even more so during COVID because traffic ebbs and flows very quickly. If it ebbs a little bit, we can always put [an Airbus A350] in. If it stays strong, we’ll keep the 777. But it’s still a big airplane, whether you put in the A350-900 or the 777, and you’re still talking about a lot of seats in the market.” 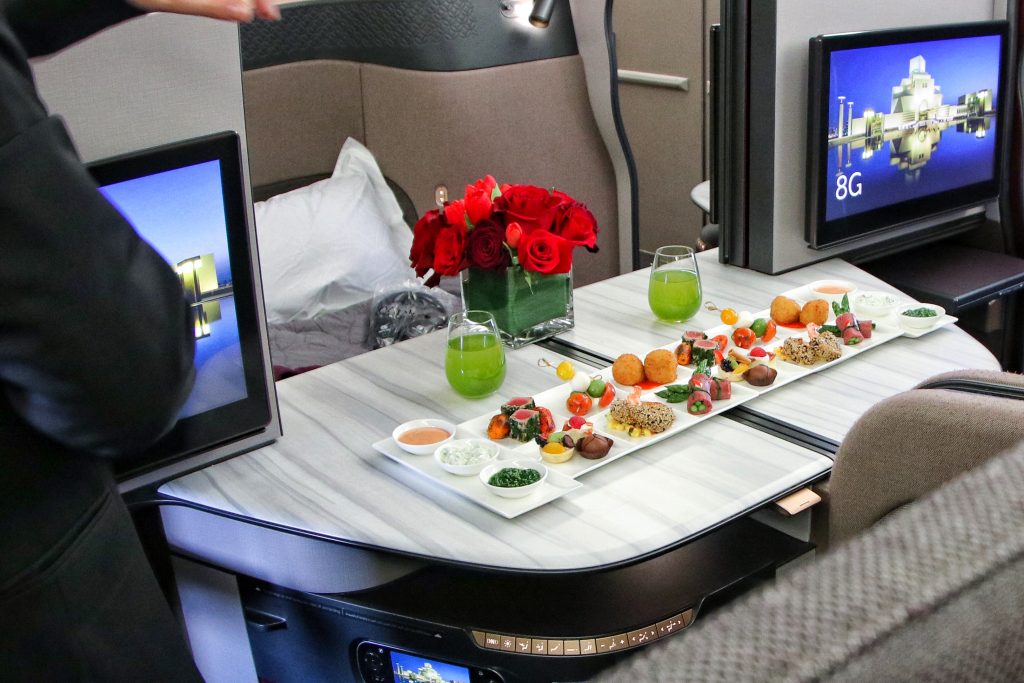 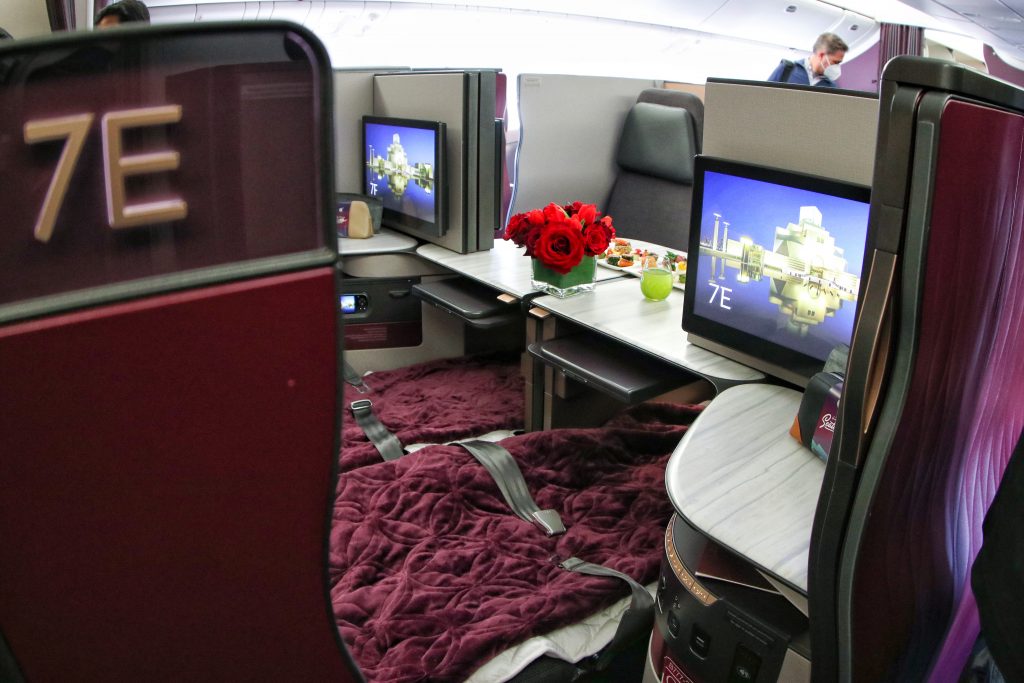 Qatar Airways has been unique in its desire to maintain its extensive international route network amidst the COVID-19 pandemic. And while that has proven a successful strategy for the airline, Drusch believes its positive effects extend far beyond the airline’s 2020 bottom line. He credits that strategy as the reason Qatar Airways has seen such success in its new markets in the past two months.

While he added that nobody, including Qatar Airways, knows “how the markets are going to develop,” he said the airline is coming out of 2020 with a new ideology for launching routes centered around cargo strategy.

“Cargo’s importance to our airline has increased during COVID. We are actually the single largest cargo/freighter airline in the world as of the most IATA reports,” Drusch said.

He added that the success has come from “a combination of what we call the ‘Golden Triangle’ within Qatar Airways where we plan all of our markets, all of our capacity, all of our aircraft allocations, between the scheduling and planning people, the cargo team and the revenue management teams. So cargo plays a much more important role in our planning today than it did prior to COVID. But most importantly, as passenger airline planners, we now will be much more cognizant and inclusive moving forward forever in planning markets based on the input of cargo also.”

And even as the U.S. has ramped up entry testing requirements in the wake of a transition to a new presidential administration just over a week ago, Drusch said Qatar Airways and passengers are undeterred and that the new policy has had no effect on customers booking flights and traveling to the U.S.

“[The U.S.’s] regulations are very reasonable in terms of, you’ve got a reasonable amount of time that you have to get a PCR test. If for some reason you’re coming from a country that does not have easy or quick PCR testing, you can do your test when you arrive,” he said. “So we’ve made the rules very flexible for people to adhere to. So we have not seen any negative impact from that requirement.”

While the airline appears to be slowing its U.S. route network additions for the foreseeable future, its jump at the U.S. West Coast in recent months has illustrated an eagerness to provide broader connectivity to the country as European airlines — previously the stalwarts of the U.S. international airline scene — have pared back their services. And while Qatar Airways hasn’t yet entered “second-tier” U.S. markets like Austin or Orlando, it’s feasible that flights from Doha are not too far away.

AirlineGeeks’ Mateen Kontoravdis and Katie Bailey contributed to this report.