While business travelers remain grounded, vacation-goers in the U.S. and abroad are slowly returning to the skies. In preparation for the upcoming winter season, airlines are pivoting their schedules to adapt to adjusted leisure demand that is anticipated.

American Airlines is the latest U.S. carrier to adopt its schedule to new travel trends. The Fort Worth, Texas-based carrier is adding 23 new and unique routes to its schedule as it focuses on more point-to-point flying within its network.

This news comes just over a week after the airline cut its October capacity by 55% and announced its intentions to drop 15 small U.S. destinations from its schedule when federal aid requirements expire in October.

Mexico will see the biggest additions to American’s network, with new mainline flights from primarily non-hub cities. The airline will fly from Cancun to Columbus, Indianapolis, Kansas City, Raleigh and St. Louis. Flights from Raleigh will operate daily while the rest of the routes will operate on Saturdays exclusively.

The airline will face competition on several of the Cancun routes from a variety of carriers within the industry. Fellow legacy airline Delta Air Lines will offer competition on the Raleigh route with its six weekly flights. American will also feel the heat from Frontier on the St. Louis route, which will see daily service from America’s second-largest ultra-low-cost carrier. American’s flights between Cancun and St. Louis are currently priced almost two times higher than Frontier.

Cancun isn’t the only Mexican city receiving new flights, though. American is also expanding its presence in Los Cabos, with flights from Austin, New York-JFK and Sacramento. American already serves Los Cabos from multiple hubs including Dallas-Fort Worth, Los Angeles, Phoenix and seasonally from Charlotte and Chicago O’Hare.

Eastern Airlines will compete with American on the New York JFK route, utilizing a Boeing 767 aircraft for its Wednesday and Saturday flights to the Mexican vacation spot. American will also face competition from its newfound ally, Alaska Airlines, on the Sacramento service.

Puerto Vallarta, Mexico will also see the addition of Los Cabos flights from Charlotte, an important domestic hub for American. The new flights to Mexico begin in December and are expected to operate until April 2021.

In addition to new point-to-point services from Mexico, American Airlines is also adding several new domestic routes from its Miami and Phoenix hubs. From Miami, the airline will offer Saturday-only service to Dayton, Ohio; Lexington, Kentucky; Milwaukee; Rochester, New York and Portland, Maine. These flights will all be served on regional aircraft operated by Envoy and Republic Airways. The airline will not compete with any other U.S. airlines on these routes. 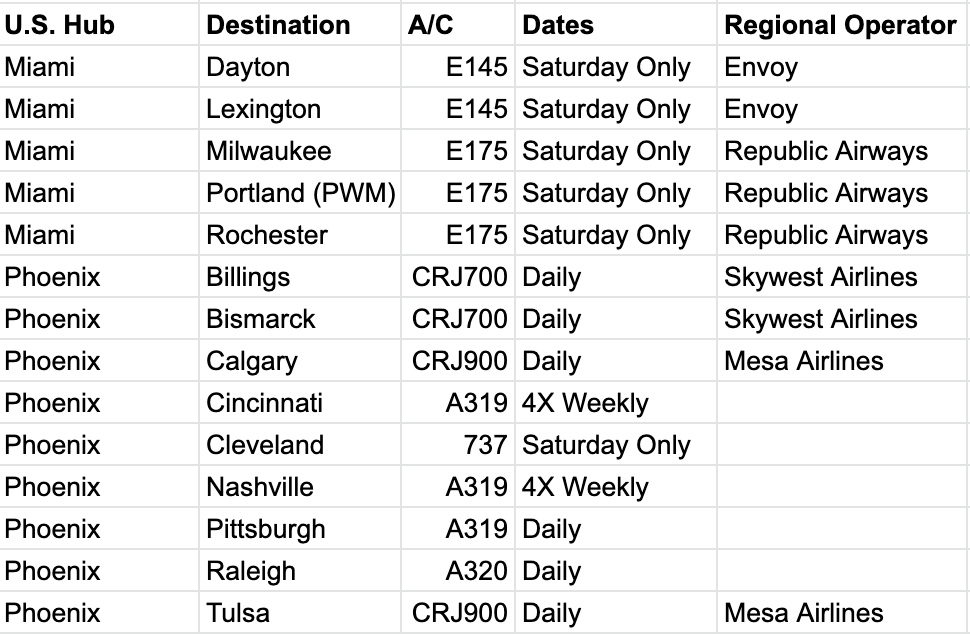 The Fort Worth-based airline is the latest U.S. carrier to adapt to the new operating atmosphere provided by the COVID-19 crisis. Earlier this week Alaska Airlines and Allegiant added new flights to their winter schedule as well in an attempt to capture more leisure flyers.

The airline noted that prior to March business travel accounted for 10-15% of passengers but 40% of the airline’s revenue. Despite being such a large margin of profit, Vasu Raja, Chief Revenu Officer, said that the airline does not need to leverage its operations around the currently diminished business customer base.

The airline expects business travel to be the last type of travel to recover. As long as international and domestic quarantine requirements remain in place, American does not expect to see business flyers returning in the same numbers they once held.

With the big focus now on leisure travel, American is focusing its operations on more point-to-point routes from strategic spoke cities, as seen with these new flights. While hub-and-spoke flying will always remain the backbone of American’s network, the airline has taken note of carriers such as Allegiant and Frontier that have had success with the point-to-point flying model.

Raja first announced the Austin to Los Cabos flights in late 2019 when he announced American’s intentions to experiment with more weekend-only leisure flying from non-hubs. The COVID-19 crisis may have put this route on hold from its original May launch date, but the pandemic has accelerated the airline’s ambitions to serve more point-to-point flying from U.S. airports that have enough traffic to justify the route.

In line with industry expectations, a source close to AirlineGeeks noted that American is planning for a scenario where the Boeing 737 MAX is recertified to fly in late October. If everything sticks to the schedule, the airline is planning to re-introduce seven aircraft into the fleet during the second half of December.

No specific schedule has been released yet but the airline is planning to base the aircraft in Miami. The airline expects the 737 MAX 8 jets to fly routes that the 757-200 fleet served prior to its expedited retirement. 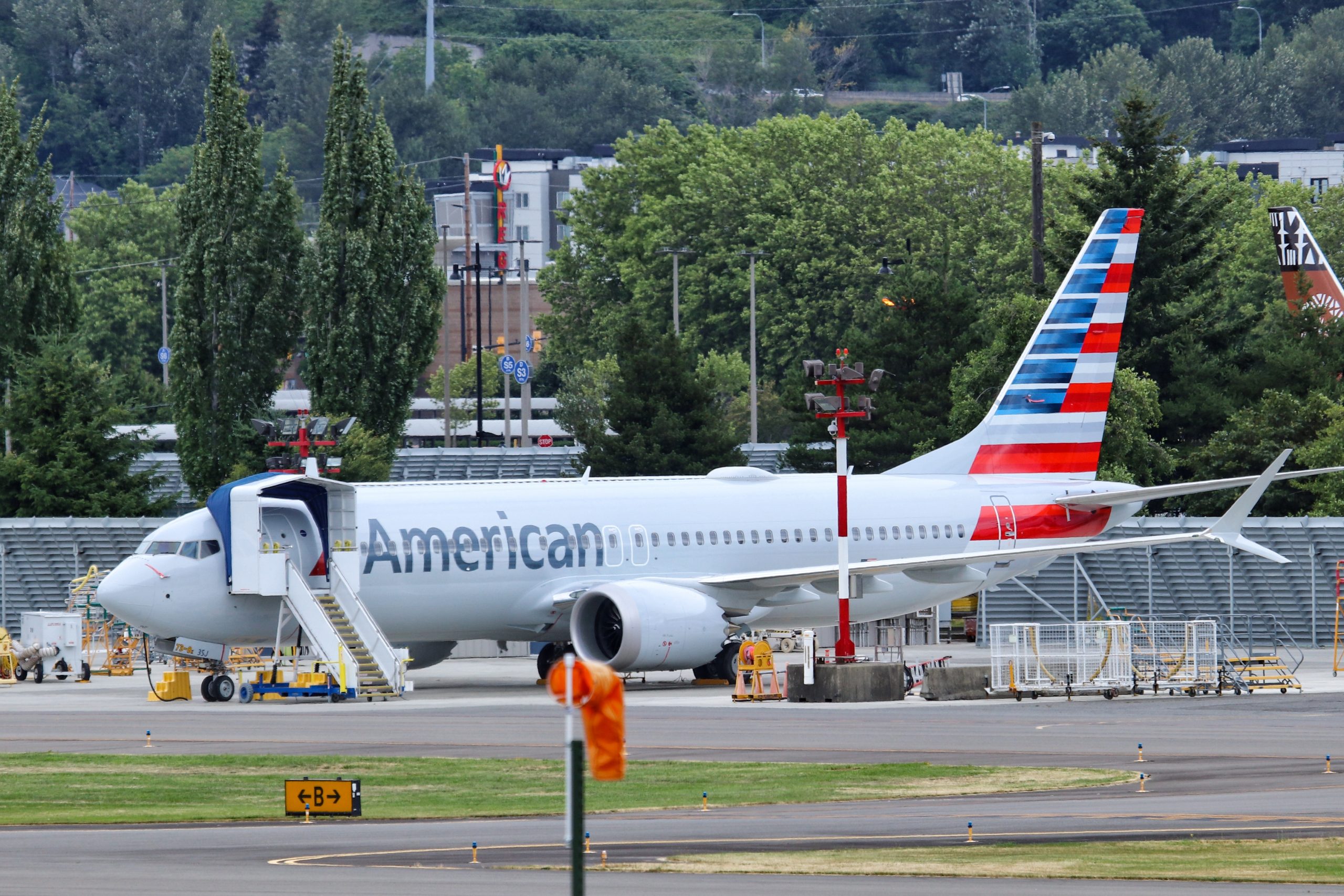 Despite the downturn in travel demand, the airline wants to incorporate the new, fuel-efficient aircraft into its fleet and retire several older, less efficient 737-800 aircraft due to the aircraft’s superior economics. The delivered jets are fully financed and owned by American.

All 24 737 MAX jets in the American fleet have been flown from Roswell to Tulsa where they are preparing for their re-entry into service.

The delivery date of 17 additional 737 MAX aircraft that Boeing has already produced for American, however, remained uncertain in July when the airline was in talks with the manufacturer to finalize financing for the aircraft. It is unclear if an agreement between American and Boeing has been reached yet regarding the 17 jets. Looking at the big picture though, American still plans to take delivery of all 100 ordered MAX jets over the next several years.

This story was updated on Monday, Aug. 31 at 1:01 a.m. ET to correct an error that placed Bismark in South Dakota when it is in North Dakota.