Sky Express, previously an all-domestic Greek carrier has launched its first flights into the international market. The airline recently started flying to Larnaca, Cyprus from its main hub in Athens, with the first scheduled commercial flight touching down on Monday, Feb. 22, according to the airline. Prior to the international launch, the carrier flew to 33 domestic destinations within Greece’s mainland and islands.

Flights are currently less than daily, but as of March 1, flights will become twice daily. The airline states in a press release that flights will slowly increase to three weekly daily flights by the end of March.

In response to the inaugural international service, the airline said: “Staying true to the values that make it fly higher every year, Sky Express supports both the Greek and Cypriot societies during this difficult time, satisfying the need of the passenger public for attractive and competitive services while flying to even more destinations.” 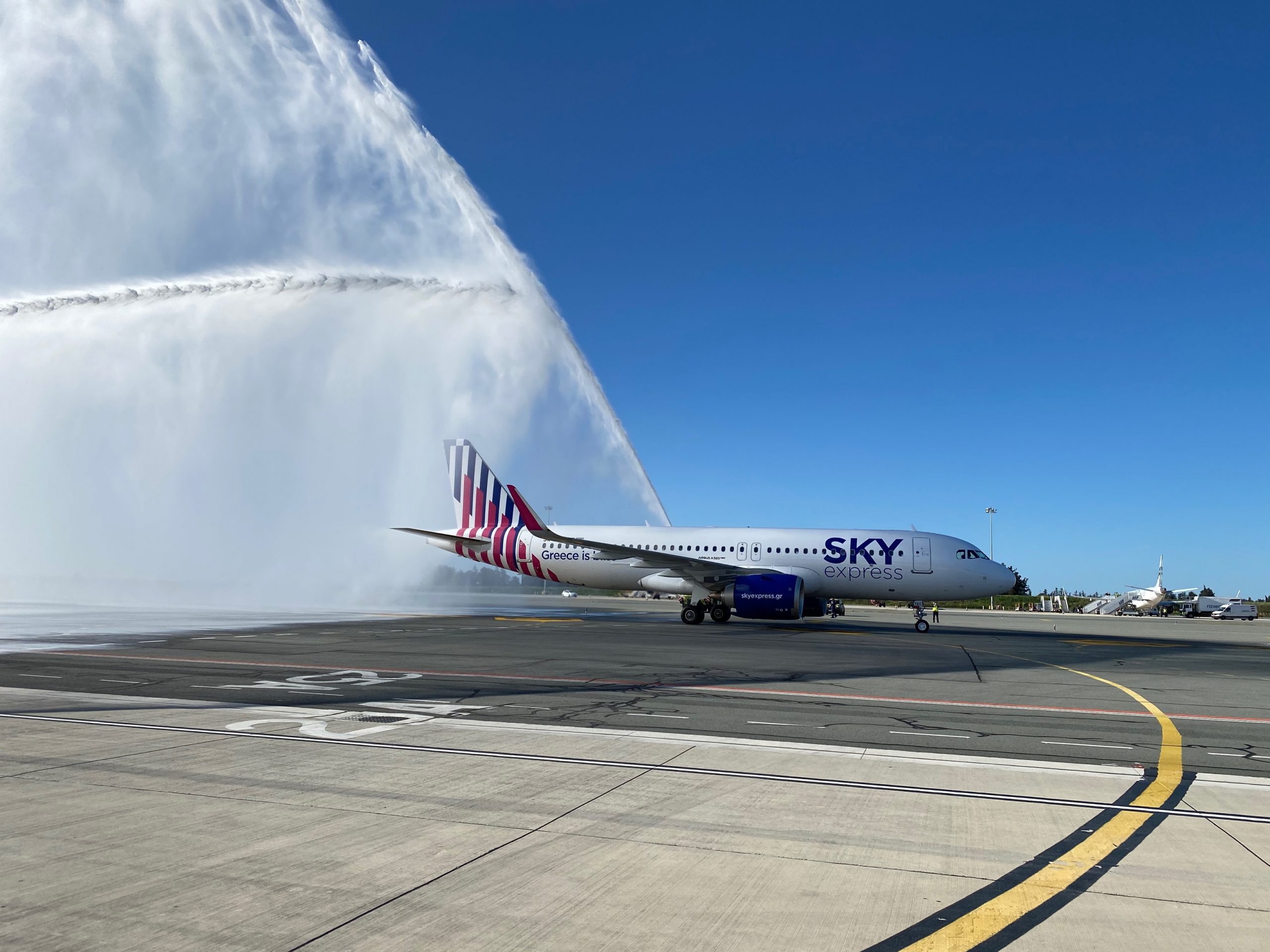 The schedule for the majority of March features a 7:15 a.m. departure from Athens with arrival into Larnaca just one hour and forty minutes after leaving Greece. The aircraft will return to Athens forty minutes later. The second frequency of each day will depart Athens at 7:00 p.m. and arrive at Larnaca at 8:40 p.m. The flight returning to Athens will depart Larnaca at 9:20 p.m.

Operations to Cyprus will take place on the airline’s brand new Airbus A320neo aircraft. The Airbus features a standard 186 all-economy layout commonly seen on other low-cost carriers around the world.

The airline also recently inaugurated domestic service between Athens and Thessaloniki utilizing the new A320neo jets. Since the delivery of the first aircraft in October, Sky Express has been rotating the jets on several popular domestic routes, bringing the A320neo to multiple Greek island airports such as Mytilene and Kos.

One of the few airlines to expand its fleet during the pandemic, Sky Express took delivery of its first two A320neos at the end of 2020. Two additional A320neos, originally intended for Interjet, have been repainted in the Greek carrier’s new livery and are currently in storage in Montpellier. These two jets are expected to join the fleet in the coming days.

According to the airline, it will also be leasing two frames from outside lessors for a total of six total A320neos. The A320 fleet will complement Sky Expresses’ current fleet of ATR 42 and 72 turboprop aircraft.

While Larnaca is the carrier’s first destination outside of Greece, international expansion is expected to continue in the following months with the addition of four new destinations in three European countries. The next planned destination is Brussels, with daily flights scheduled to commence on March 28. Following that, the airline will launch Saturday-only flights to Paris Charles de Gaulle Airport. From its Athens hub, the airline will also launch flights to Nantes and Lyon this summer.

From its Heraklion hub, Sky Express is scheduled to commence flights to Dortmund and Hamburg in May. According to Cirium, Sky Express will offer approximately 101,000 international seats from its Athens and Heraklion hub during August 2021, a busy month for tourism in Greece.

Sky Express has been awarded the “Fastest Growing Airline” award by Athens International Airport for five consecutive years. With six A320neo jets planned by summer 2021, the airline is expected to announce more international services in the future.

While the summer travel season is at its mid-season peak, several major airlines continue to rebuild and expand their route…