A Delta Airbus A321 in Atlanta (Photo: AirlineGeeks | Craig Fischer)

On Thursday, Delta Air Lines announced that it would convert 25 options of Airbus A321neo aircraft into a firm order, bringing a total of 125 Airbus A321neos to the fleet. Additionally, the airline acquired options for a further 25 aircraft, for a total of 100 aircraft options.

With the new orders, the Atlanta-based carrier expects its first Airbus A321neo deliveries in the first half of 2022, a delay from a pre-pandemic estimated delivery of late 2020. In addition to the new Airbus A321neo aircraft, Delta plans to accelerate and accept the delivery of three long-haul aircraft in the second half of 2022. Specifically, this incorporates two Airbus A350-900 deliveries and one A330-900neo delivery. The airline intends to take an additional two Airbus A330-900neo aircraft in 2021 and resume A350-900 deliveries in 2022. The delivery of the A330-900neo allows the American carrier to retire its aging Boeing 767-300 by 2025.

Mahendra Nair, Delta’s S.V.P. – Fleet and TechOps Supply Chain, states, “With our customers ready to reclaim the joy of travel, this agreement positions Delta for growth while accounting for the planned retirements of older narrowbody aircraft in our fleet, addresses our carbon footprint, increases efficiency and elevates the customer experience. We thank Airbus for their steadfast partnership during the pandemic and look forward to working with them as we take delivery of the A321neo as well as our accelerated A350 and A330-900neo deliveries.”

However, the Airbus A321neo cannot replace the Boeing 757-200s critical role in transatlantic travel due to range issues. To do that, Delta Airlines would need to convert a portion of their orders or options to the Airbus A321XLR program, an extended range variant of the Airbus A321neo. 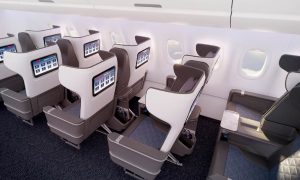 Passengers can expect 194 seats on the Airbus A321neo, including 20 new first-class seats showcasing improved privacy, enhanced memory-foam cushions, an enlarged tray table, more storage space for personal items and other new features. The airline will feature a heavy emphasis on Delta’s premium economy product, Comfort +, with 42 seats. Meanwhile, its economy class has 134 seats, similar to its current offering on its Airbus A321-200 aircraft.

These orders align with their current family of Airbus A321-200 aircraft and Airbus A320 family aircraft. The Atlanta-based airline has 115 of the Airbus A321ceo – current engine option – with an additional 12 incoming. However, Delta’s Airbus A321neo’s are powered by the Pratt & Whitney PW1101G turbofan engines, providing a 12% efficiency increase.

In its recent first-quarter 2021 earnings, Delta Air Lines reported positive news, amid an overall loss of $1.5 billion. In March 2021, the carrier reported an average daily cash gain of $4 million, showing improved signs towards a recovery. Therefore, with impending signs of a recovery, the airline believes its’ time to intake more aircraft.

“Recent demand trends are encouraging with rising confidence in air travel as vaccination rates improve and travel restrictions ease, with current domestic leisure bookings 85% recovered to 2019 levels,” said Glen Hauenstein, Delta’s president. “In the June quarter, we expect significant sequential improvement in revenue as leisure demand accelerates into the peak summer period and we add capacity efficiently with the removal of our seat block May 1 with revenues recovering to 45 to 50 percent of 2019.”