A Delta A321 rests on a hard stand outside of the airline’s TechOps facility in Atlanta (Photo: AirlineGeeks | Alex Navitsky)

The global COVID-19 pandemic has forced many airlines to adapt their fleets and networks and to reschedule hundreds of deliveries scheduled not just in 2020 and 2021, but also those in years ahead as airlines look to rework their balance sheets to better prepare themselves for the long run back to profitability. With a decrease in worldwide passenger demand of more than 50%, the last thing most carriers want at the moment is having more new aircraft parked, preventing them from turning their owners a profit.

In that vein, Delta Air Lines has announced it will delay the delivery of its first Airbus A321neo to 2022. The new model was originally expected to be delivered in 2020, but the current situation has forced the American carrier to delay even more of its plans, both in terms of fleet restructuring and network growth.

Delta has an order of 100 A321neos slated to be delivered in the next three years. However, the carrier is negotiating with the European manufacturer to adapt the delivery schedule. According to the initial agreement, Airbus would deliver 18 aircraft in 2021, another 20 in 2022 and the remaining 68 by 2023.

With the delay of one year, the airline expects to receive the new aircraft when the market starts to recover. Delta intends to finish all of its Airbus A321ceo — short for current engine option — deliveries by this year, the model of which the carrier is the largest operator in the world. Compared to its predecessor, the A321neo boasts a 16% cut in fuel consumption, up to 75% reduction of noise and 50% lower emissions.

The Atlanta-based airline, however, does not expect to receive any Airbus A350s this year and will wait until 2022 for the next two additions to the airline’s newest widebody fleet. In January, Delta received two Airbus A220s and four A321ceos, setting it up as the carrier that received the most aircraft from Airbus that month. 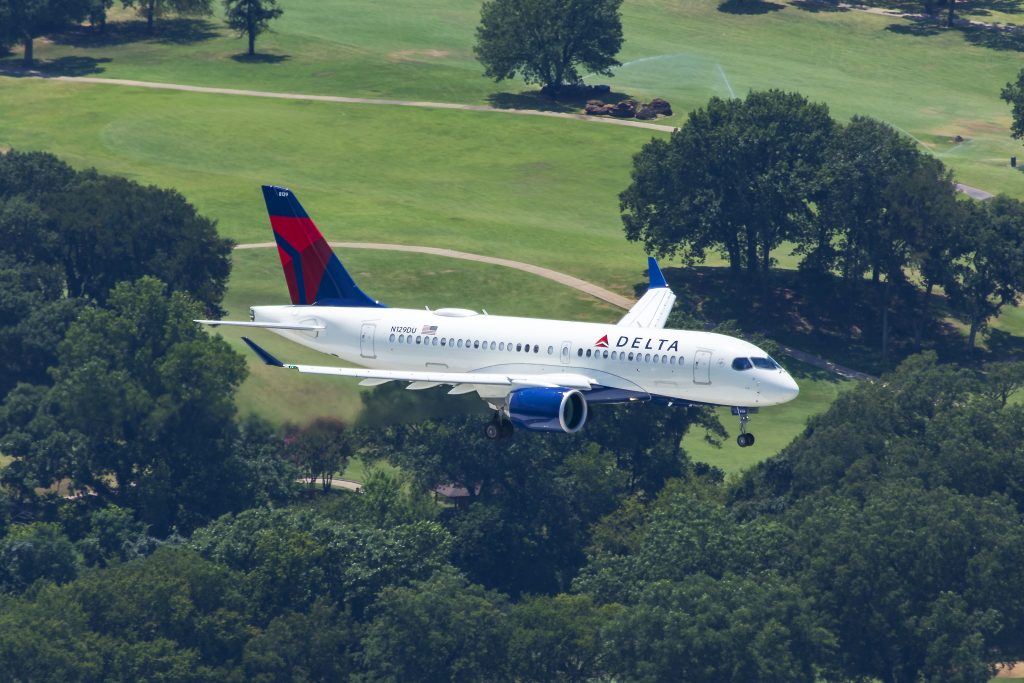 A Delta A220-100 on final approach. (Photo: AirlineGeeks | William Derrickson)

Despite Delta pushing back its A321neo deliveries this week, the A321 continues to serve as a bastion of Airbus’s narrowbody portfolio for carriers worldwide. On Feb. 7, Vietnamese low-cost carrier Bamboo Airways added its first unit of 2021, as VN-A222 was delivered from Hamburg, Germany to Hanoi, Vietnam’s Noi Bai International Airport and began operating the next day. Since then, it has been connecting Hanoi with different airports in China as the celebration of the Chinese Lunar New Year continues to strengthen both China’s domestic market and nearly all international routes to and from the country.

With this new aircraft, Bamboo Airways is pushing forward with its objective of taking delivery of 30 Airbus A321neos by 2025 as part of its expansion plan to 100 aircraft by that year. The aircraft, officially labeled as an A321neo ACF — Air Cabin Flex — includes two business classes plus economy class while its capacity is reduced from the original 244 seats to 223 seats.

This is the second aircraft that Bamboo has received this year after the delivery of an Embraer E190-100LR from aircraft leasing company CDB Aviation.

“As Bamboo Airways eyes further roadmap development anchored in the carrier’s strategy to have a route network connecting all regions of Vietnam, we look forward to supporting their efforts to meet the increasing demand from the country’s burgeoning tourism industry,” commented Sign Kadouh, CDB Aviation’s Head of Asia Pacific in a statement.