There is a reason that I opted out of Avelo’s media flight in late April, and my experience on the airline’s inaugural Phoenix/Mesa to Burbank flight highlighted that. Media flights are typically set up to go perfectly with an operational execution that does not match with reality. And sure enough, Avelo’s first flight last month was just that, with mostly media onboard and only a handful of paying passengers.

On May 3, Avelo began service between Burbank, Calif. and Phoenix/Mesa, Ariz. The carrier opted to fly into the smaller Phoenix Mesa Gateway Airport in east Phoenix, which currently only has regular service from Allegiant. It’s a nifty idea, as East Valley residents can expect a 30-minute-or-more drive to the bustling Phoenix Sky Harbor International Airport.

The flight was a turnaround trip with the outbound scheduled to Burbank at 7:30 a.m. local time, arriving in Phoenix at 9:00 a.m. Our flight, returning to Burbank, was scheduled to leave at 10:30 a.m., arriving at noon.

On this short one-hour flight, Avelo got a lot right, but also plenty wrong.

My first ride on Avelo did not exactly get off on the right foot. I snagged one of the airline’s introductory fares, which was only $24 and included a seat assignment. That’s a bargain in the Phoenix-Burbank market, but as the old saying goes: “you get what you pay for.” This notion definitely held up on Avelo. 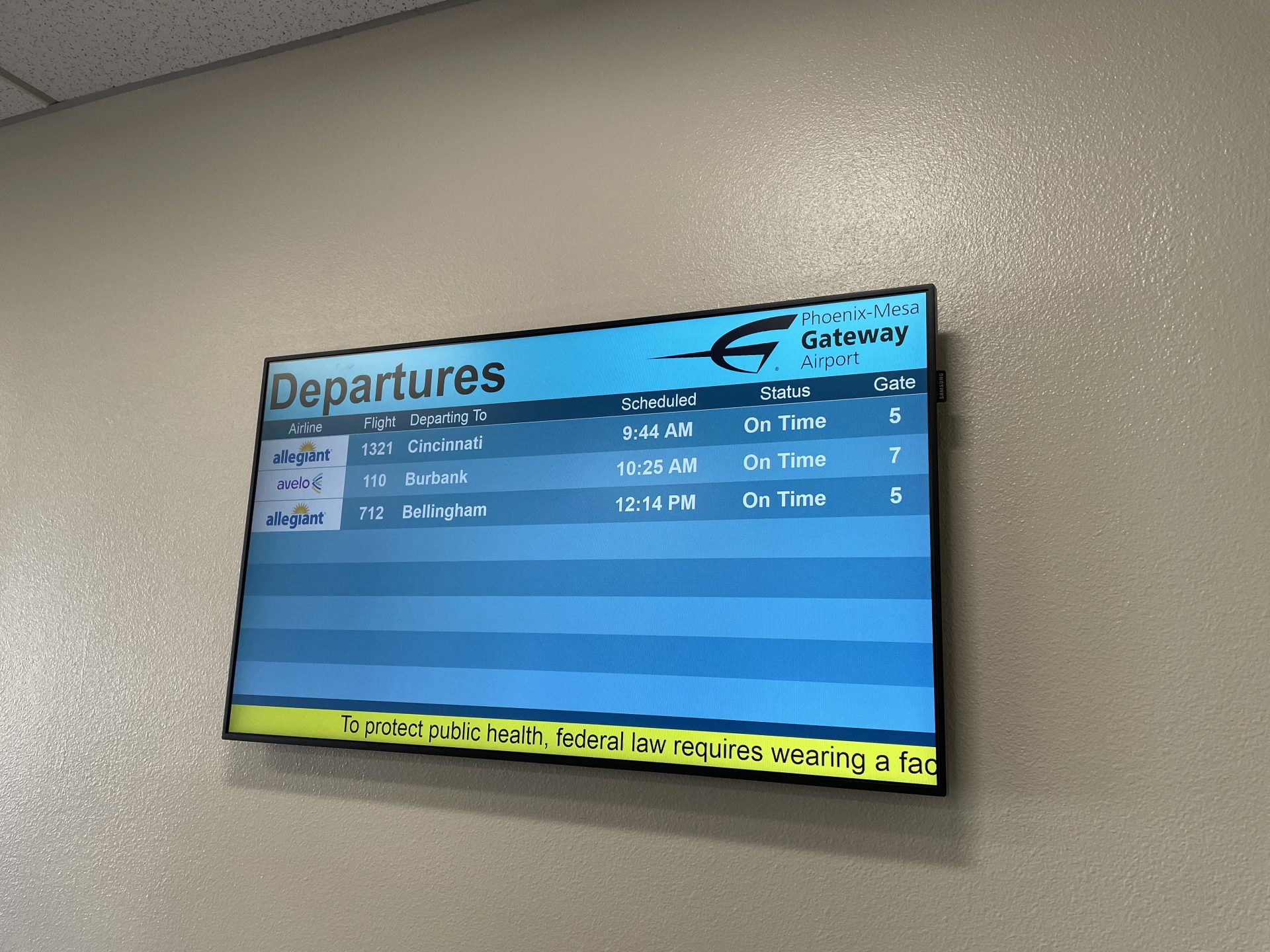 I arrived about an hour ahead of departure and was not able to check in for the flight ahead of time online. So I proceeded to the ticket counter, only to find it closed. Boarding was slated to start in about 15 minutes.

Some of the carrier’s ground handling staff seemed to be troubleshooting computer issues, and another person I knew on the flight said this had been going on for almost an hour prior to my arrival. A few minutes later, we were told to approach the counter. I received my boarding pass, which looked like it was printed on a printer at home one minute prior to the scheduled boarding time.

The other person on the flight checked a bag and received a handwritten claim tag.

We all have first days, I get that. But, as a start-up airline trying to attract clientele, wouldn’t you want all your ducks in a row prior to the launch day? Burbank to Phoenix is undauntedly one of Avelo’s most competitively saturated markets; there’s no room to slack.

I soon realized — and it slipped my mind a bit prior to the flight — that Avelo does not yet offer TSA PreCheck. The company is a start-up and likely has not gone through the compliance process to support this addition.

It’s a bit of a culture shock to not have PreCheck, but the line at Gateway Airport was not long and we moved through rather quickly. I am really hoping this is something Avelo is considering, though.

Beyond the PreCheck issue, there was a level of confusion at the checkpoint since, according to some of the officers, Avelo was manually checking us in and the data wasn’t linking with the TSA’s Secure Flight Program. So, the officers had to manually verify us.

I fully understand that the customer base Avelo is targeting does not travel often and likely does not have PreCheck. However, Allegiant targets the same group and offers it.

And Here Comes a Delay…

After passing through security and arriving at the gate, the airport authority had set up a nice display with some branded tchotchkes and cookies to celebrate the inaugural Phoenix flight.

By this point, we were well past our printed boarding time and were informed that there would be a delay as the aircraft had to be pushed off the stand, power up and taxi back in. The reason for this was not explained to us, but the airplane was sitting on the ground for well over 30 minutes prior. 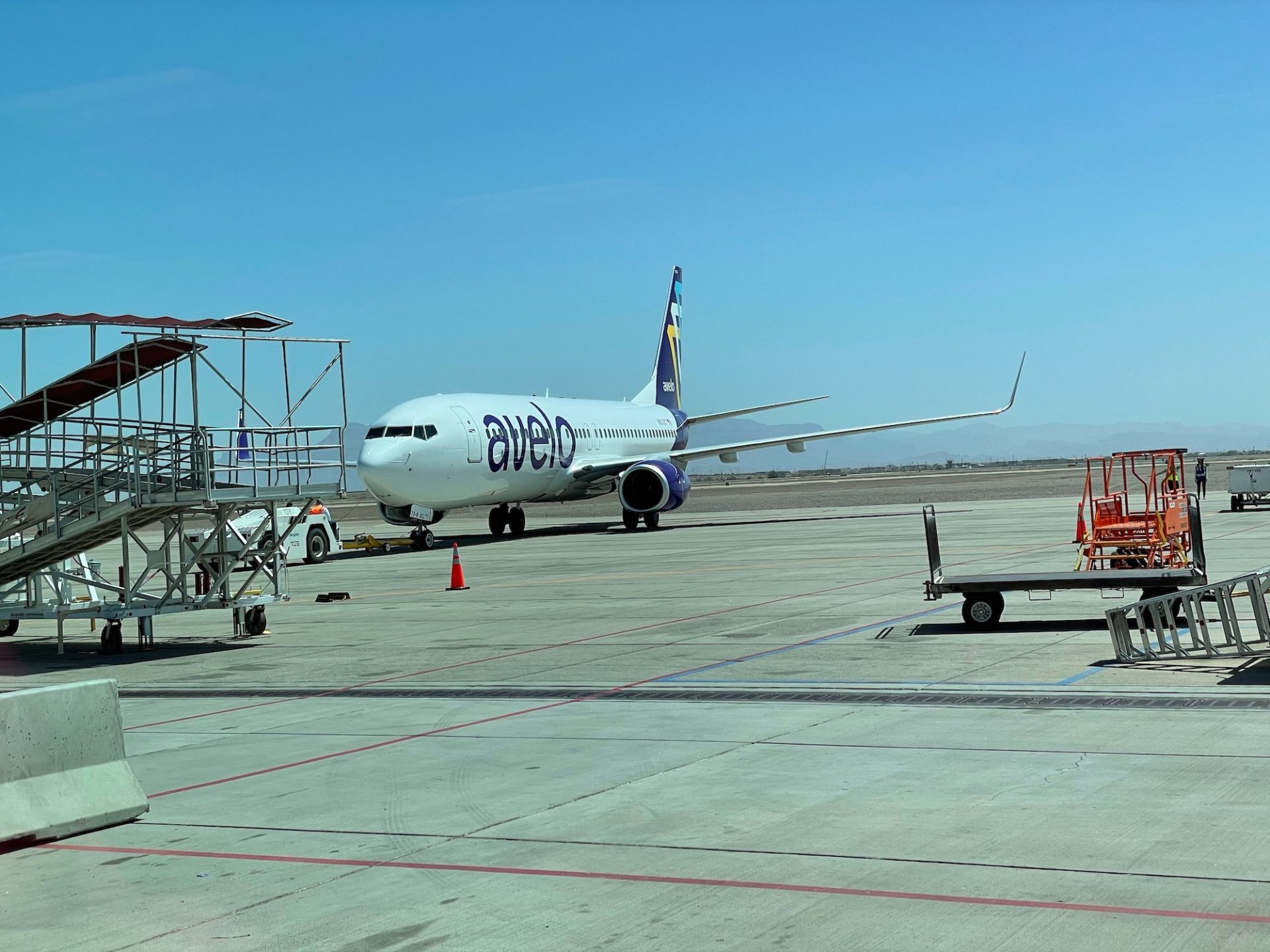 Our Avelo flight pushing back and then returning to the gate (Photo: AirlineGeeks | Ryan Ewing)

Looking out the window, the ramp staff looked to be scrambling to find a tug to pushback the Boeing 737. Our posted departure time had gone by and we watched as the airplane was repositioned on the taxiway and brought back in for an unknown reason.

Fuel had also arrived after that maneuver took place, which, again, is something you’d expect to be done well before the posted departure time or during the morning originator flight.

Finally, it was time to board, and the agents called all passengers at once, after those needing assistance. There were no group numbers on our boarding passes, so I’m assuming this was just a one-off occurrence. Thankfully, the airplane was not nearly half full, so everyone boarded rather quickly.

Dispatch reliability is a key data metric in measuring an airline’s operational success, which, of course, trickles over to the financial side, with this figure often referenced in shareholder meetings. Avelo is in its early life stages, so there’s little to measure thus far. Though, as it grows, I’m concerned these types of issues will become more of a theme.

We walked out to the freshly-repainted 15-year-old 737-800. The interior was fresh and clean. The crew was also quite friendly and thorough with their onboard announcements.

One point of interest that stood out to me was that it appeared the airline was seating everyone towards the back of the aircraft. I had selected seat 35F, and the plane was quite full in the aft section despite the light load factor. There were a few people scattered upfront, but some had strangers sitting next to them, which is odd considering that most airlines allow passengers to spread out nowadays. I’m wondering if this was more of an issue involving weight and balance; perhaps the Center of Gravity (CG) was too far forward.

Despite that, I scored a whole row to myself. The seat itself was fairly comfortable considering the expected tight legroom. But it did recline, which was a bonus. 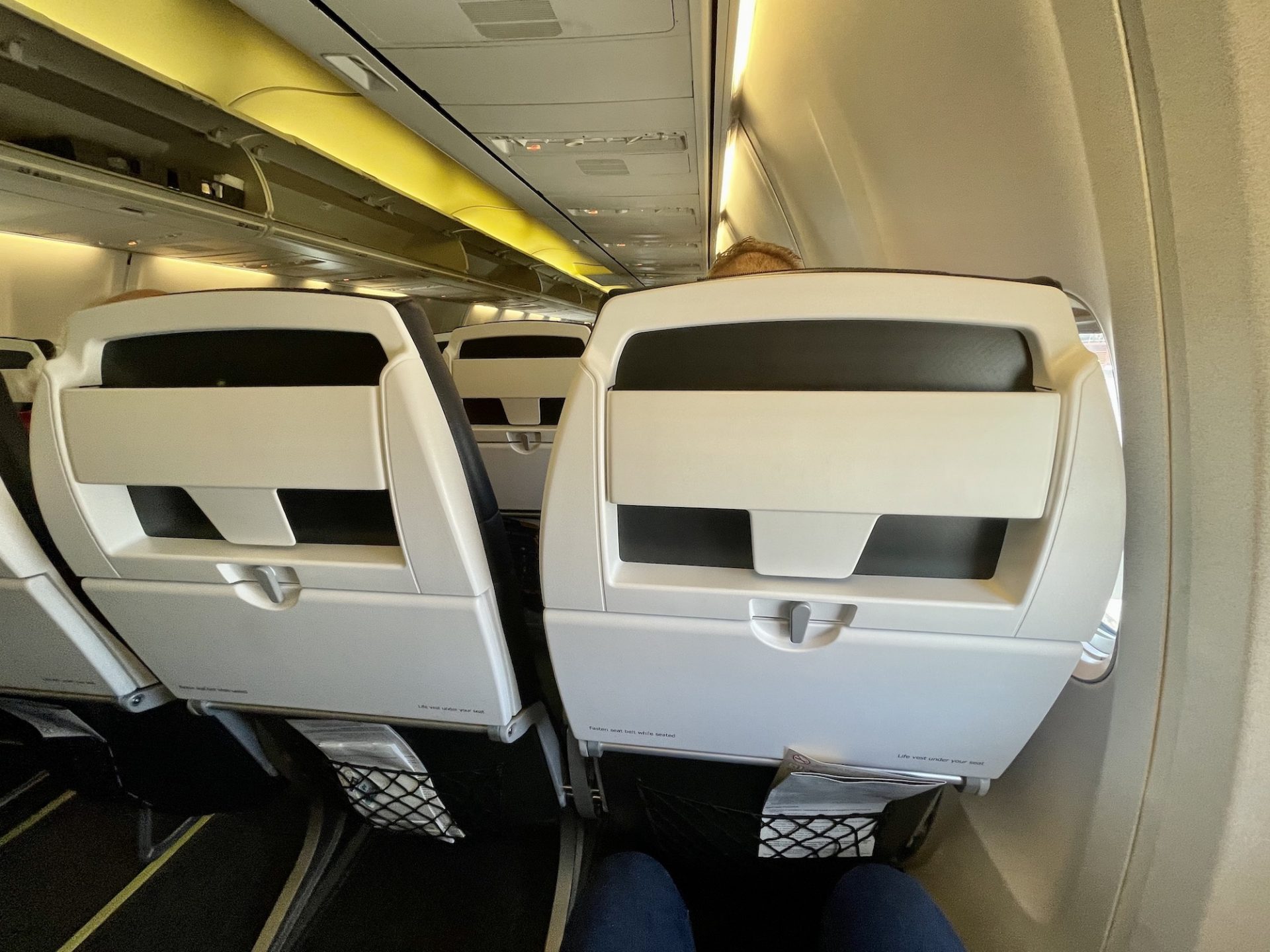 The flight was mostly uneventful and, after takeoff, the crew came around to hand out a COVID-19-era snack bag featuring a wipe, water, and some cookies. This was a nice touch from an ultra-low-cost airline. 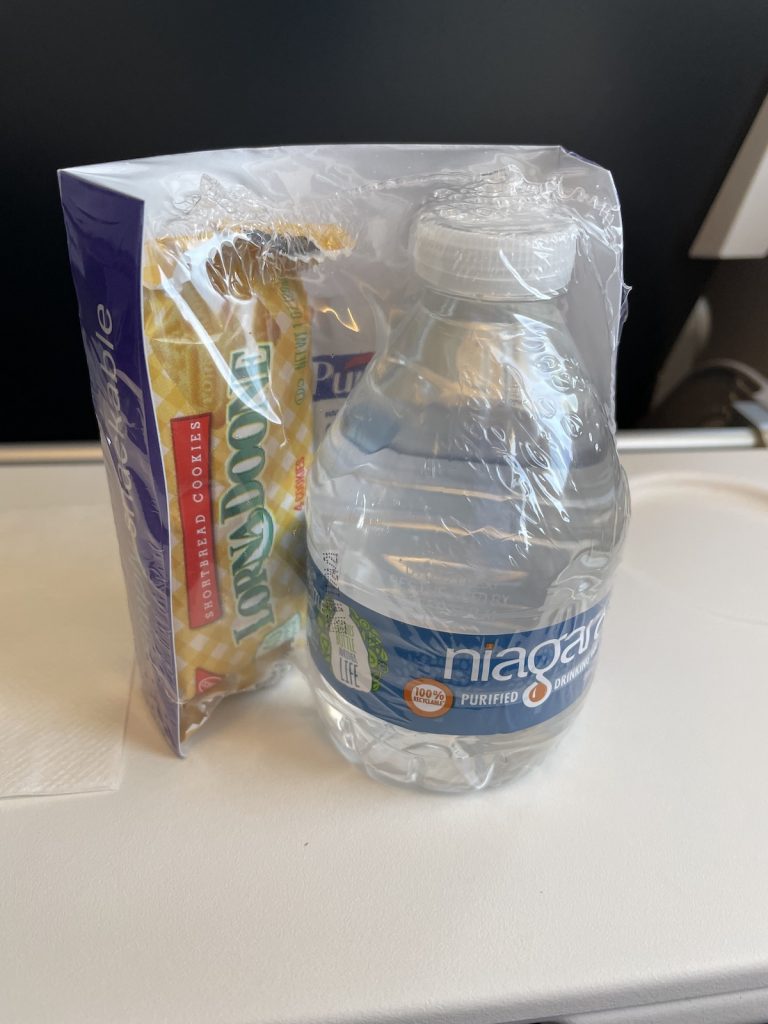 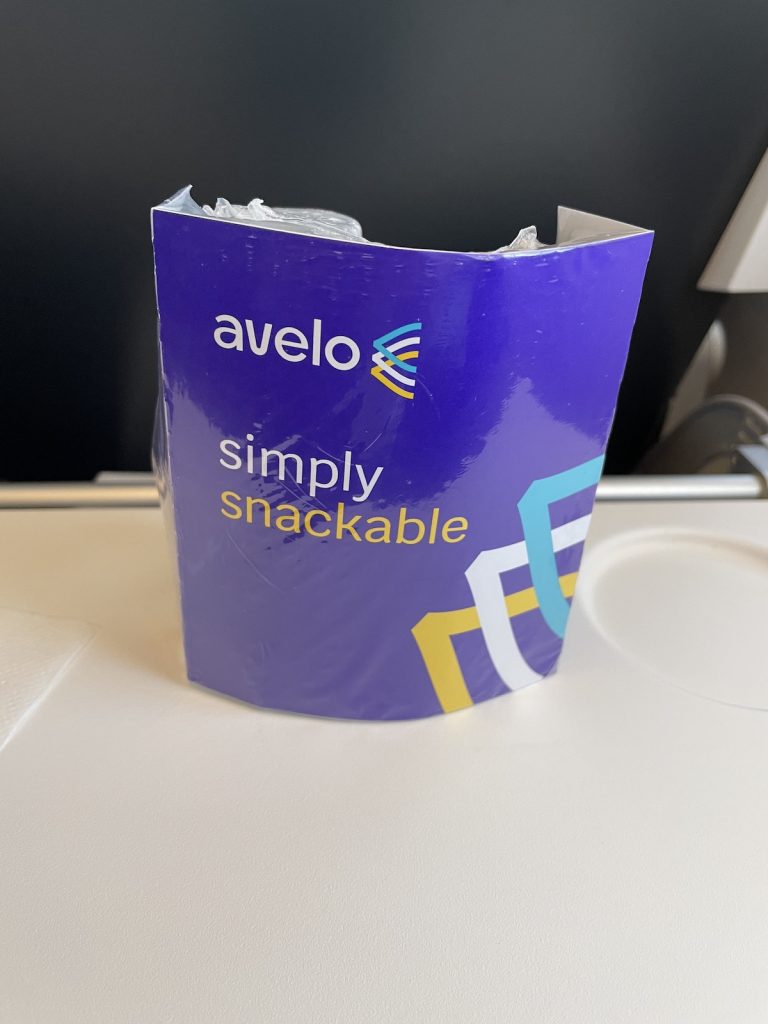 The arrival into Burbank was rather rough. The airport is nestled in the hills, creating some often turbulent conditions. Add to that a shorter runway and it is a recipe for a dicey landing. This definitely was the case on our flight, and I think that freaked some of the other passengers out a bit. 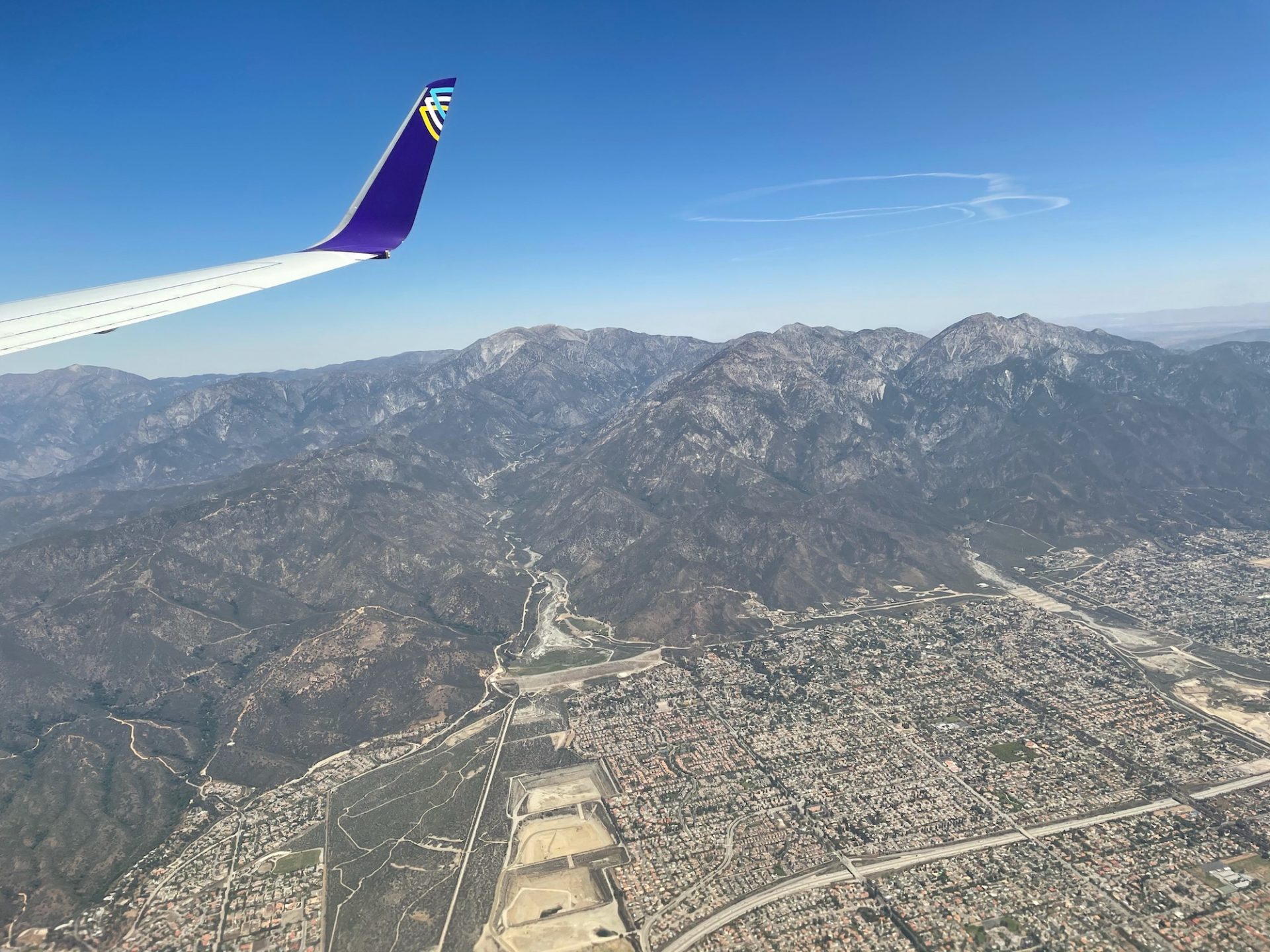 I heard some grumbling during the deplaning process from a couple next to me, among others, who weren’t a huge fan of this. Nevertheless, I can’t blame the airline or its pilots for this rough ride. That’s just the nature of the beast in Burbank.

We rolled into the gate more than 45 minutes behind schedule and were greeted with a friendly “welcome to Burbank” by ground personnel.

Lack of Preparedness and First Impressions

My experience on Avelo was widely different than those, including my AirlineGeeks colleague, experienced on the airline’s first flight from Burbank to Santa Rosa in April. It seemed as though the airline had all its ducks in a row for that flight, but definitely not ours, shedding light on a few themes.

For what it’s worth, a quick scan of ADS-B data shows that most of Avelo’s other operations since its start data have been on time. Perhaps our delay was a one-off incident?

Whether it’s the IT issues at check-in, repositioning the aircraft at the gate, last-minute fueling or boarding all groups at once, a lack of preparedness seemed to be the common theme on my Avelo flight.

Sure, some of these are growing pains and any start-up operation will experience them. But some of these issues, such as the check-in problems, could have been dealt with days prior to the inaugural flight. First impressions are everything and the airline business is no exception to this. Avelo just did not seem to care about that from an operational perspective.

It was clear to me that the airline’s station staff had little experience, and many of them appeared to still be training. Once again, this type of training should have been done well before an initial flight with revenue passengers onboard. The optics were off.

I think Avelo has a niche opportunity to lure in more regular clientele on some of its routes, including the Phoenix to Burbank run. That’s an almost guaranteed continuous revenue stream. But to attract these types of customers, the airline needs to set the tone and differentiate itself from the others. To achieve that goal, these types of blunders just can’t happen.

Where Avelo Gets It Right

From the ground staff to the in-flight crew, I did not encounter one unfriendly Avelo employee. Granted, the airline’s Gateway Airport operation is ground-handled, but even the contracted staff seemed happy and willing to help. Avelo is doing something right with employee morale.

Despite the circumstances, the ground staff in Phoenix were patient with customers and frequently updated us on the delay. I also noticed the company’s CEO Andrew Levy, who appeared very hands-on in the operation, was on the flight.

The flight attendants were also very attentive, providing thorough and clear announcements. They also came around plenty of times to collect waste. It was easy to see that they were motivated. Even the captain made several announcements updating us on our progress.

And despite only paying $24 for my one-way ticket, Avelo offered everyone onboard a $25 credit for the delay. This was a very nice gesture in the no-frills ultra-low-cost airline world.

From a customer service perspective, Avelo shines bright. We received smiles and thanks in Burbank.

Avelo definitely has potential. I am certainly rooting for them as their business model has the ability to be more widely-useful as it expands.

From the outside, Avelo’s inception has appeared to be rushed. This is understandable considering that the company’s leadership wants to rapidly capitalize on a nimble travel market as COVID-19 loosens its grip on the industry. This need for speed may be the culprit behind some of Avelo’s lapses.

For now, though, it has a lot of growing pains to heal. A bit more planning and preparation would serve Avelo — and its customer base — well as it begins to expand more.

Follow Ryan
Ryan Ewing
Ryan founded AirlineGeeks.com back in February 2013 and has amassed considerable experience in the aviation sector. His work has been featured in several publications and news outlets, including CNN, WJLA, CNET, and Business Insider. During his time in the industry, he's worked in roles pertaining to airport operations and customer service while holding a B.S. in Air Transportation Management from Arizona State University along with pursuing a concurrent MBA and law program. Ryan has experience in several facets of the industry from behind the yoke of a Cessna 172 to interviewing airline industry executives. In addition to supporting AirlineGeeks, Ryan works full-time in the aviation industry.
Follow Ryan
Latest posts by Ryan Ewing (see all)
737airlinesAveloBoeingcarrierFeaturedlow costnew airlineRoutesstart uptrip report
Related Stories
[ Related Stories ]January 12, 2023 7:00 am ET
By Fangzhong Guo