Onboard Breeze Airways’ Inaugural Flight from Tampa to Charleston

Both cities will serve as two of Breeze’s four East Coast bases with New Orleans and Norfolk being the other two. The startup took flight just a month after low-cost competitor Avelo Airlines launched its maiden flight from Hollywood Burbank Airport to Sonoma County Airport on April 28.

Breeze is the brainchild of infamous airline mogul David Neeleman, well-known in the industry for founding JetBlue Airways, Azul Brazilian Airlines, WestJet and Morris Air – which merged with Southwest Airlines in 1994. Using a point-to-point network to connect medium-sized markets, Breeze hopes to fill the gaps left open by the hub-and-spoke model used by legacy carriers. Considering Neeleman’s successful track record, the airline is expected to prosper with its sound business model and technology-driven customer service strategy.

The inaugural flight from Tampa to Charleston is a highly underserved leisure route currently only operated by Silver Airways. However, Breeze’s product easily outshined its competitor, with generous legroom and only $20 carry-on and checked bags. Fortunately, AirlineGeeks’ got to be on that flight — here’s our firsthand experience onboard “the world’s nicest airline.”

The festivities began at Tampa’s Main Terminal, where guests heard from Breeze executives and Tampa and St. Petersburg tourism representatives. Founder and CEO David Neeleman explained how he chose the routes, saying he specifically targets city pairs with no nonstop service. He also discussed one of the visions for the airline — if Breeze’s customer service is simply nice to their customers, those customers will want to come back.

He said, “Breeze starts with the foundation that we’re seriously nice. The airline business is unfortunately not flawless, there are many things that can make operations irregular like maintenance or weather delays. However, if we can continue to just be nice, then the people will be nice to you in return. If you start with anger, then that leads to unhappiness, and then people won’t fly you again. Being nice is a promise we can build around.” 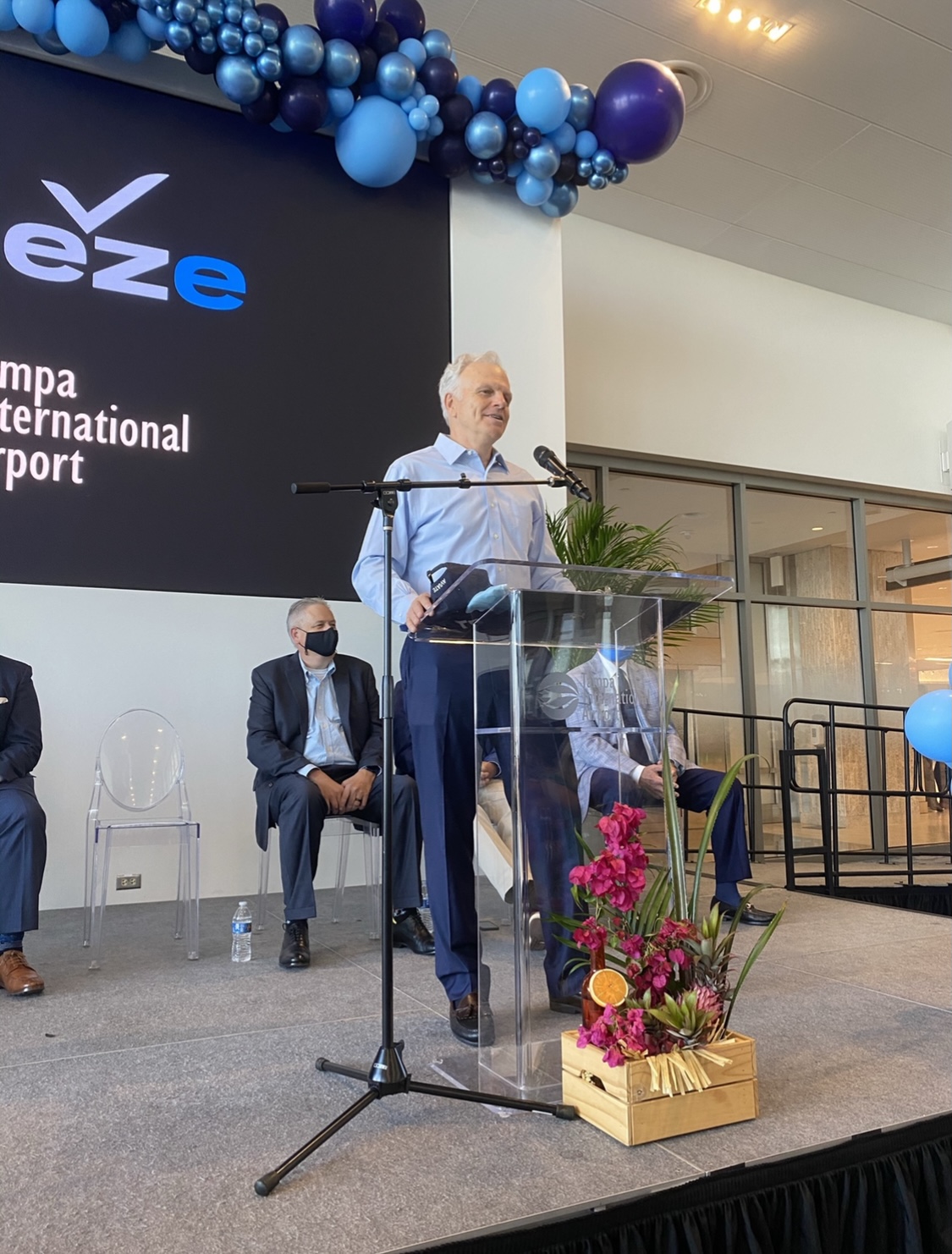 The media also heard from Embraer Vice President Mark Neely, who explained why the E190/195 jets were perfect for Breeze’s business strategy. He said, “Success these days is about having the right aircraft, capacity at the right markets and the right frequency with the right ticket price. Our Embraer 190s and 195 are right on point with all of that. These two airplanes have excellent unit operating costs and make them ideal for this Breeze low fare business model. They’re incredibly versatile airplanes that allow you to have the frequency without adding excess capacity which allows for the preservation of yields.”

After the press conference, passengers were escorted to gate C43, where we got the opportunity to go down to the ramp and watch Neeleman do a champagne christening of the E195 aircraft used for the inaugural flight. 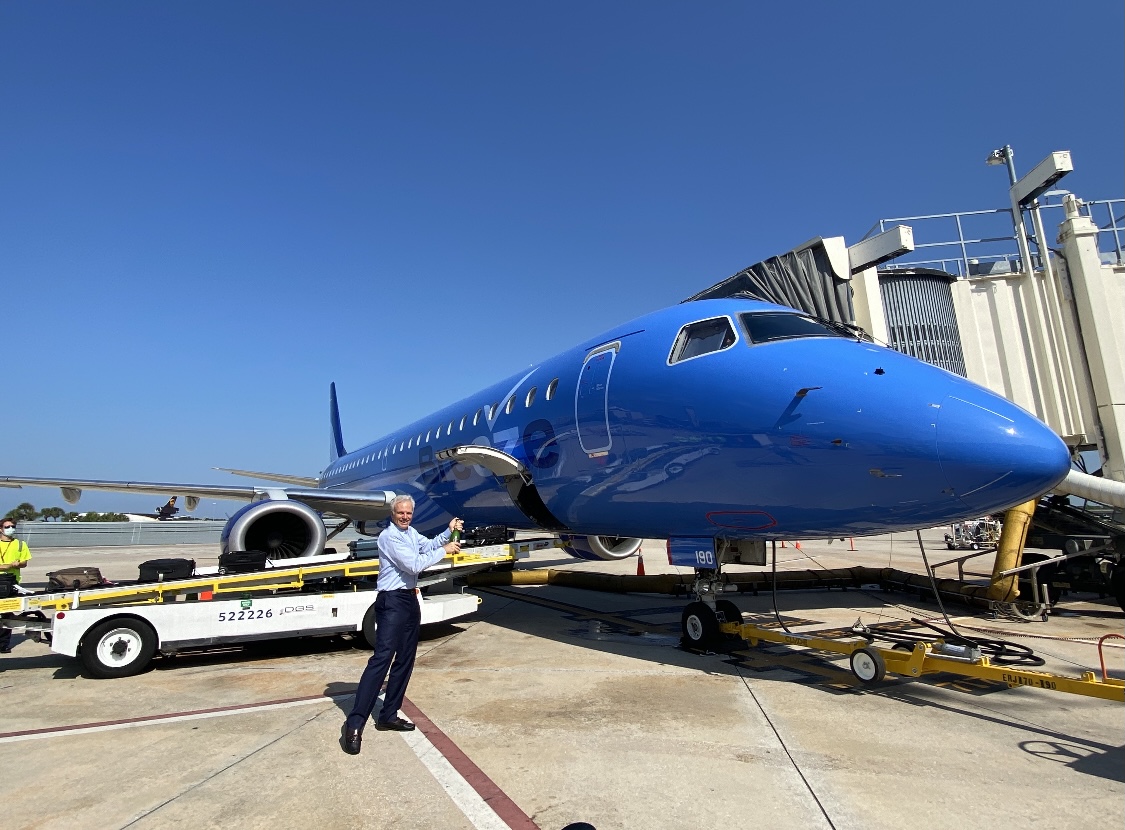 Breeze has acquired 13 Embraer 190/195 aircraft for its fleet. The airplanes accommodate 108 to 118 passengers in a 2×2 configuration, guaranteeing passengers get a window or aisle, meaning no middle seats.

The cabin is split into “Nice” and “Nicer,” with the E195 “Nicer” seats boasting a generous 34 to 39-inch pitch and an all-inclusive ticket package. Customers who purchase a “Nice” fare will need to pay extra for seat selection and baggage, but the seats will still have a roomy 31-inch pitch.

After our photo-op on the ramp, we headed back to the terminal to see Neeleman cut the cake and officially launch the airline. 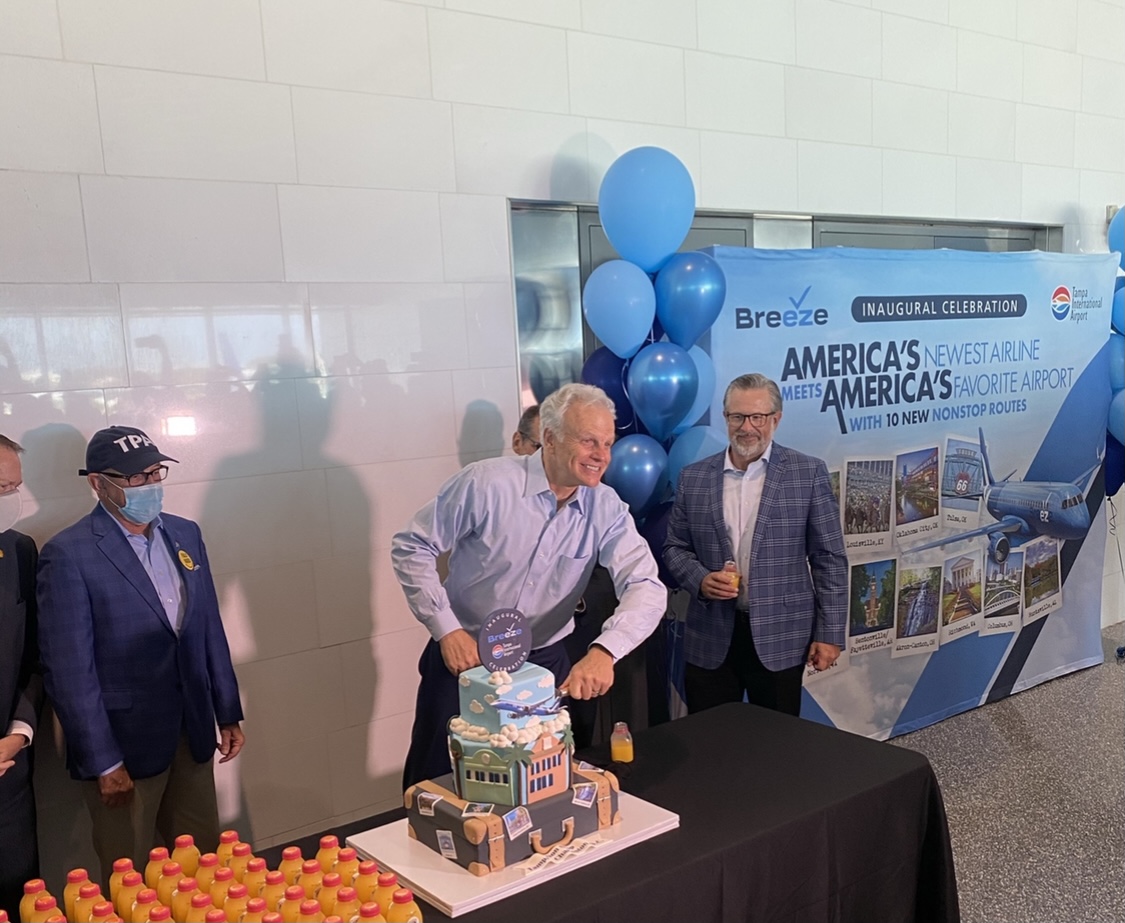 Passengers could use Breeze’s app to check-in online 24 hours in advance, store their boarding pass and read details about the aircraft. While the app was a little glitchy and does not have Apple Wallet capabilities yet, it worked well for the inaugural flight. The airline was even set up with TSA Pre-Check, so I was able to whiz through security.

Passengers can check-in and retrieve their boarding pass on the Breeze app (Photo: AirlineGeeks | Taylor Rains)

After a water cannon salute in Tampa, we took off right on time and began our 57-minute journey to Charleston. We couldn’t have asked for a nicer day for flying. 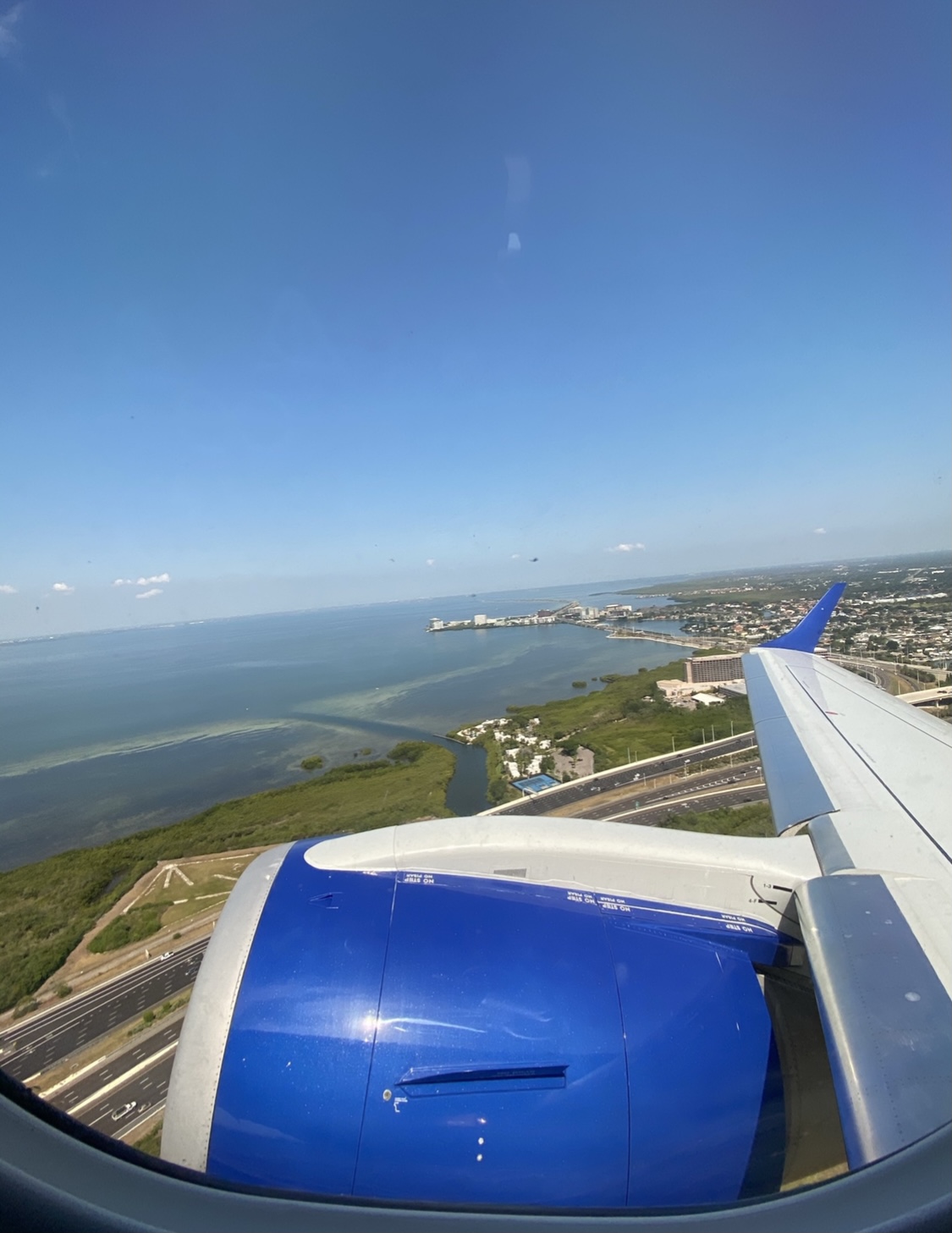 It was a beautiful day for flying (Photo: AirlineGeeks | Taylor Rains)

Onboard the Inaugural Flight

Neeleman isn’t exaggerating when he says Breeze is “seriously nice.” First and foremost, the seats exceeded expectations. The padding was more than enough to be comfortable for a few-hour flight and they had decent recline, plentiful legroom and the tray tables were easily large enough to fit my laptop.

Unfortunately, it seems like Breeze doesn’t plan to keep these seats and will instead replace them with a slimmer Safran model. While this seems like it could devalue the product, a representative from Breeze explained that the seat pitch on the E195s would remain the same and they will be adding power ports.

Furthermore, inflight entertainment will soon be available for passengers on personal devices on the E190/195s and WiFi connectivity will be available on the Airbus A220s. 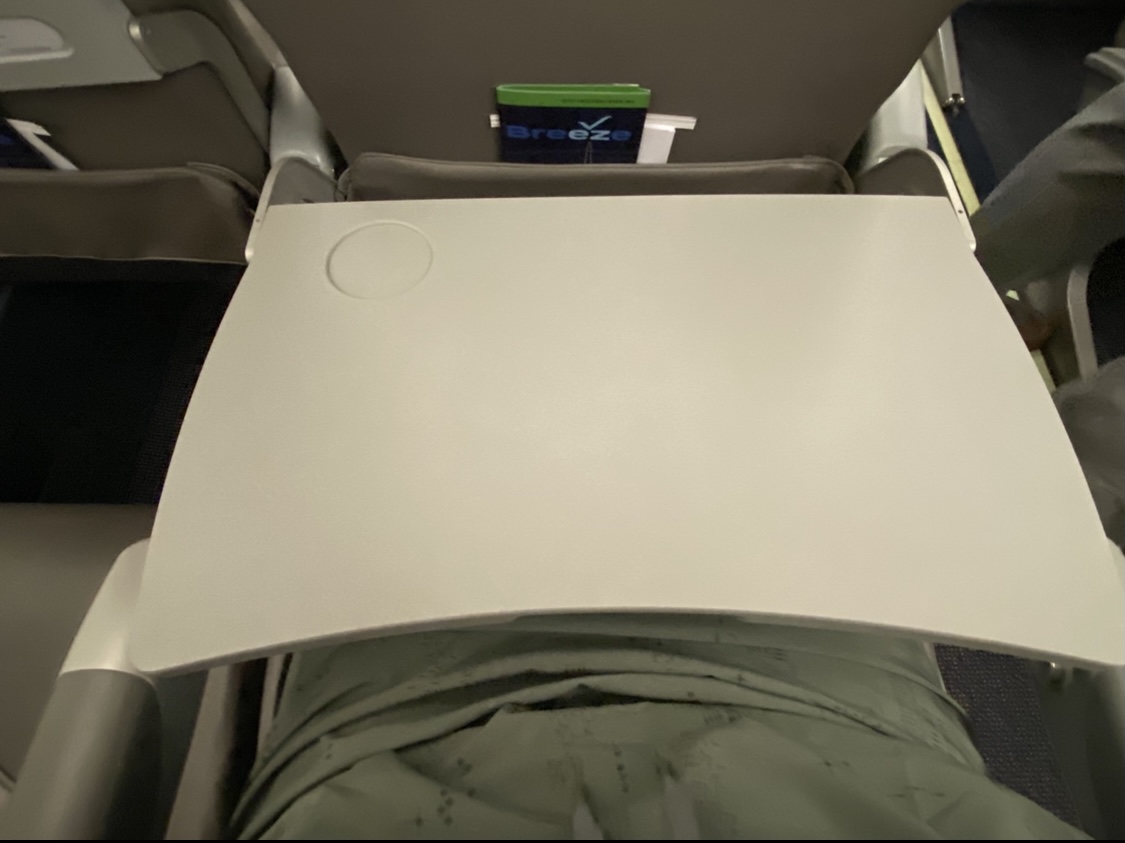 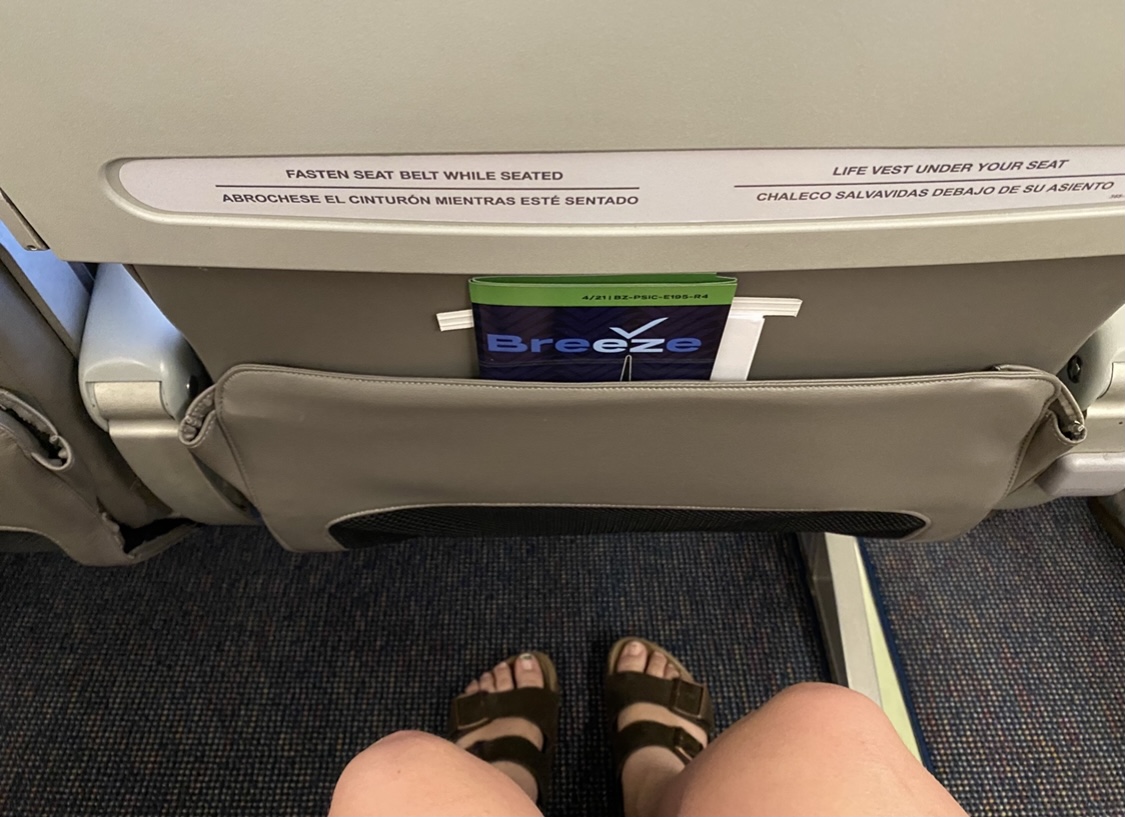 Breeze has a 2×2 seat configuration with a 31-inch pitch in the “Nice” class on the E195 (Photo: AirlineGeeks | Taylor Rains)

About 20 minutes after takeoff, the flight attendants started the inflight service. They served bottled water, Kind Mini Bars and Utz Potato Chips. For now, these tasty snacks are free in both classes but will be a-la-cart for “Nice” fares later this summer. 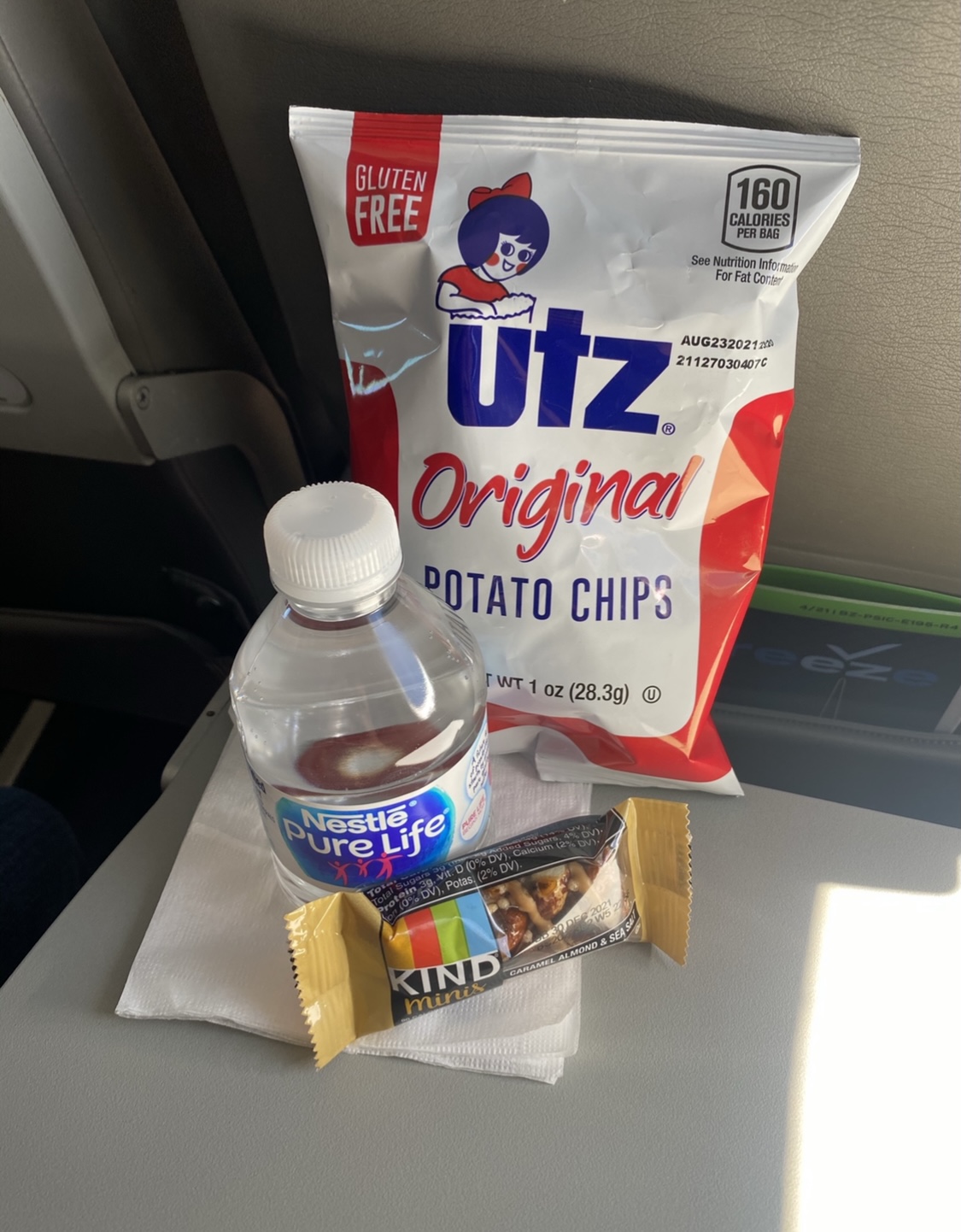 Breeze snack service will be complimentary in “Nicer” but will be a-la-carte in “Nice” starting later this summer (Photo: AirlineGeeks | Taylor Rains)

We landed in Charleston about an hour after takeoff and were welcomed with applause and cheers from airport staff. After deplaning, we heard from Charleston Airport Director Elliot Summey, who thanked Breeze for choosing Charleston as its first destination and how it will help his local community prosper. 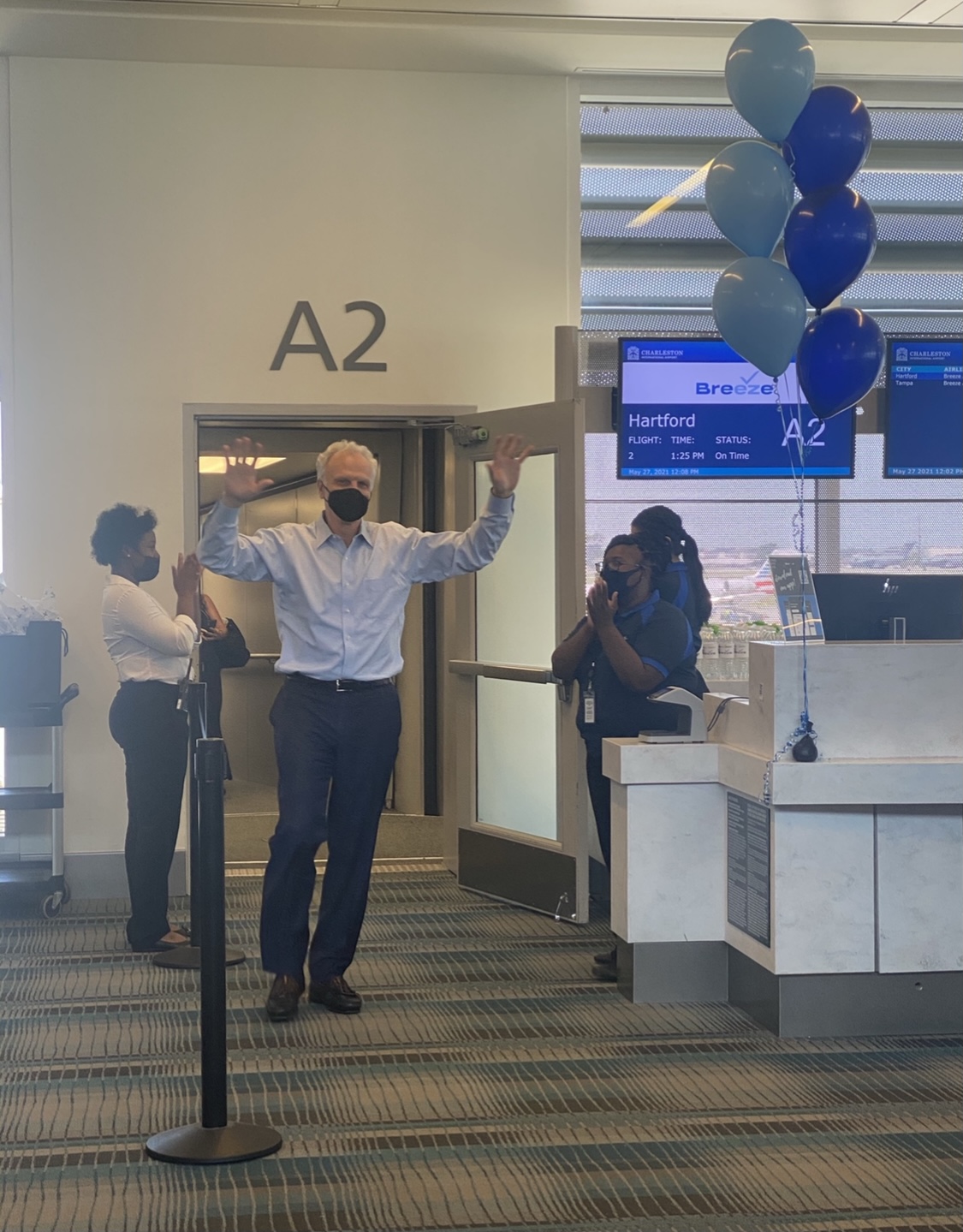 The partnership between Charleston International Airport and Breeze will bring tourism and prosperity to the local community (Photo: AirlineGeeks | Taylor Rains)

How Does Breeze Compare to Other Newcomer Avelo?

Avelo Airlines and Breeze Airways are the United States’ latest startups, and having two launches within a month of each other is nothing less than intriguing. Not to mention, Avelo recently announced Tweed-New Haven Airport as its East Coast base, suggesting it may be creeping into Breeze’s network plan.

While there is a lot of room in the market for more flights and frequencies, the question stands: is there enough room for both and will one be more successful than the other? With two industry veterans at the helms — Avelo’s Andrew Levy and Breeze’s David Neeleman — both airlines have the potential to soar. Let’s quickly compare the two.

From a low-cost standpoint, Avelo’s product is expected — cheap fares for a 29-inch pitch regular economy seat comfortable enough for an hour or two flight. Anything more than that will be at an extra cost. However, the tray tables were noticeably bigger than its budget competitors and the seats actually reclined, which was a pleasant surprise. As far as inflight service, the company is offering complimentary drinks and snacks onboard but plans to provide this a-la-carte in the future – similar to other ultra-low-cost carriers.

Meanwhile, Breeze Airways’ product proved to be nicer than Avelo’s — which I guess is the point of the airline’s “seriously nice” motto. The seats were extremely comfortable, which is mostly due to the great padding throughout. The recline, large tray tables and 31-inch pitch definitely added to the experience. However, it does not appear that these seats will last long. But, hopefully, the new ones will offer a level of comfort that exceeds what it experienced on traditional low-cost airlines.

One of the other pros going for Breeze is the seat configuration. Avelo is currently operating a fleet of Boeing 737-800 jets, which are set up in 3×3 rows. This opens the possibility of getting stuck with the dreaded middle seat if you do not pre-select a seat for a fee. However, Breeze’s fleet of E190/195s are in 2×2 rows, meaning no one will worry about getting stuck in the middle and there is a lesser need to prepay for a seat.

While Breeze’s base product shines over Avelo’s, it does still have its low-cost model, meaning checked luggage, carry-on bags and seat selection cost extra. However, customers have the option to bundle their fares on both Avelo and Breeze, though Breeze’s add-ons appear to be more expensive. For example, a checked bag on Avelo costs $10 compared to $20 on Breeze. Meanwhile, seat selections start at $4 on Avelo and $10 on Breeze.

Overall, I have high hopes for both companies, though Breeze definitely outshines in terms of customer experience. I suspect the product will get even more attention once the inflight entertainment and power outlets get installed later this year.

Breeze Airways’ product was what I expected it to be – a comfortable airline that is connecting the right underserved leisure routes. It has a lot of potential in the markets it has chosen and will likely expand quickly, especially with its pedigree to the popular JetBlue Airways, which could bring in more customers.

While I was slightly disappointed that a lot of the technology Breeze promoted was not available on the inaugural flight, I am impressed with the app and am excited to see the future of the company’s tech-driven customer service strategy.