American startup airline Breeze Airways revealed its first set of routes on Wednesday, aiming to launch service just in time for Memorial Day weekend. The industry newcomer released the first batch of cities to which it will begin service throughout May, June and July as the airline moves toward a complete slate of 39 nonstop routes to 16 cities by the week of July 26.

The airline’s first flights will operate between Charleston, S.C.; Tampa, Fla. and Hartford, Conn. beginning May 27, with routes to the remaining 13 cities beginning over the course of the following eight weeks.

In addition, Breeze is looking to “focus most flights” around four cities: Charleston, Tampa, Norfolk, Vir. and New Orleans.

In the case of Tampa, Breeze will serve 10 cities from the Florida hub. However, the airline will only start service to Charleston and Louisville, Ky. in May, with Tulsa, Okla.; Norfolk; Bentonville, Ark.; Oklahoma City and Akron, Ohio services beginning in June and Richmond; Columbus, Ohio and Huntsville, Ala. flights kicking off in July.

Charleston’s 11 routes follow the same pattern though are more backloaded in the two-month window. Flights to Hartford, Tampa and Louisville begin in May, flights to Norfolk will begin in June and Breeze will start service to Akron, New Orleans, Pittsburgh, Columbus, Richmond, Huntsville and Providence, R.I. in July.

The airline’s third main focus city — Norfolk — will see service to Breeze’s three other focus cities in addition to four others: Hartford, Columbus, Pittsburgh and Providence. Finally, the airline is launching service from New Orleans to 10 cities, but the city will not see any routes launch until July 8. Between July 8 and July 16, however, the airline will inaugurate service to Charleston, Louisville, Akron, Bentonville, Oklahoma City, Richmond, Tulsa, Columbus, Norfolk and Huntsville. 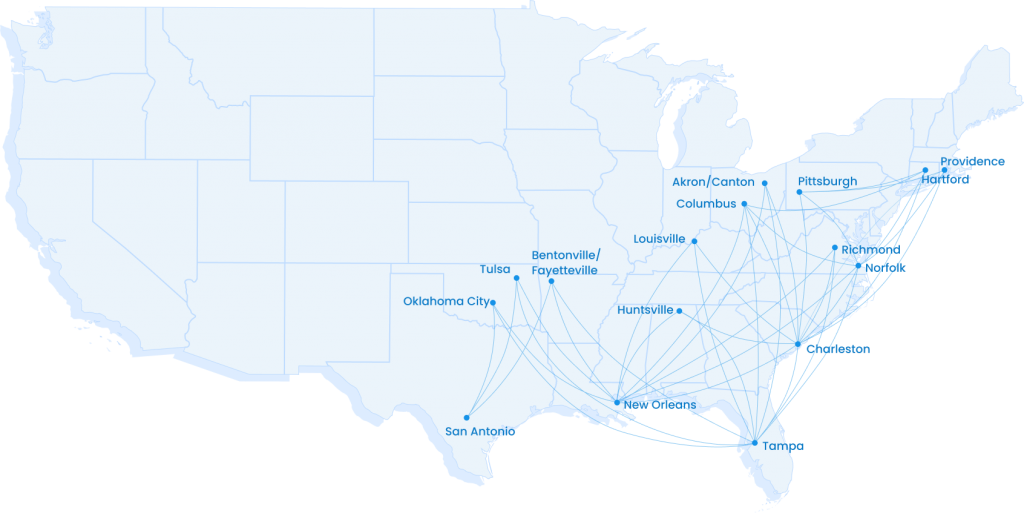 A map of all 39 routes Breeze will launch over the next few months, announced Friday as the airline began accepting reservations (Photo: Breeze Airways)

Nearly all the routes were chosen based on one of Breeze’s major themes: serving city pairs that founder David Neeleman believes have been left behind by the hub-and-spoke system of most major U.S. carriers.

“Breeze provides nonstop service between underserved routes across the U.S. at affordable fares,” Neeleman said in a statement announcing the routes. “A staggering 95 percent of Breeze routes currently have no airline serving them nonstop. With seamless booking, no change or cancellation fees, up to 24-months of reusable flight credit and customized flight features delivered via a sleek and simple app, Breeze makes it easy to buy and easy to fly.”

In an interview with AirlineGeeks in early May, Neeleman said Breeze saw 700 city pairs between which it could successfully operate. So above all else, these 39 routes may be serving as only a proof of concept for the airline as it begins to add aircraft to its fleet in the months ahead. 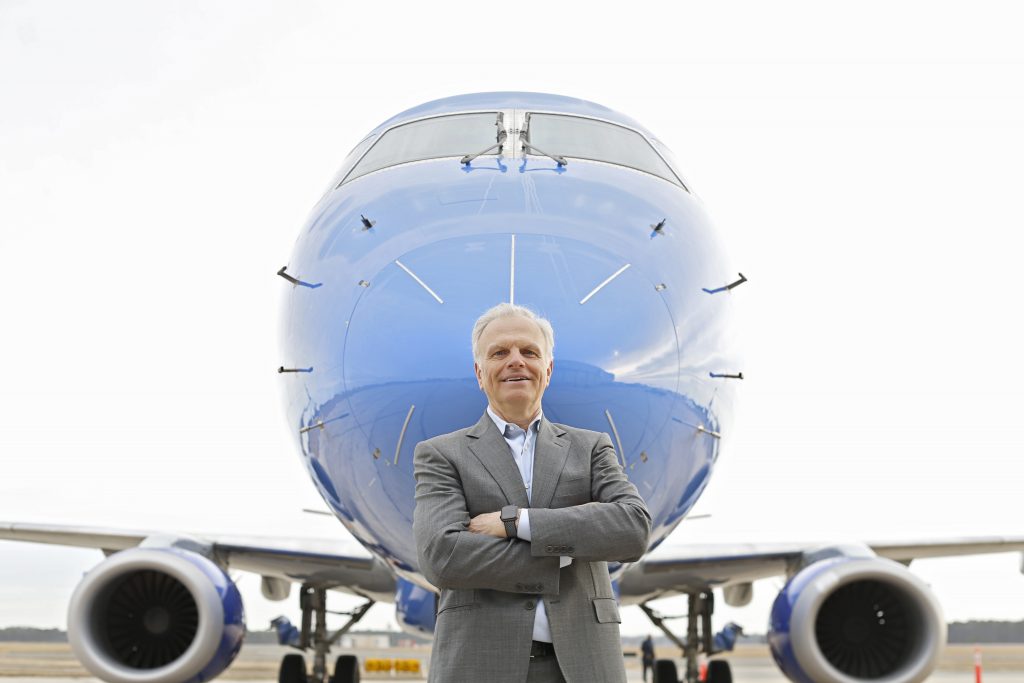 Breeze CEO David Neeleman stands in front of one of Breeze’s Embraer aircraft, which will operate the first of the carrier’s routes. (Photo: Cean One Studio | Cean Orrett)

Breeze will begin its operations with a total of 13 aircraft, including 10 Embraer E190 aircraft configured with 108 seats and a further three Embraer E195 aircraft that will hold 118 passengers, both in an all-economy 2-2 configuration. In addition, the airline will receive 60 Airbus A220 aircraft between October 2021 and September 2026, taking delivery of one new aircraft per month throughout that period.

Bringing in the new aircraft will also see Breeze launch longer flights, possibly to a wider variety of destinations. In its statement, the airline said that the average flight time for the Embraer aircraft will be under two hours, while every route the A220 operates — to be announced in the fall — will be over two hours in length, capitalizing on the aircraft’s ability to fly farther than similarly-sized counterparts.

The introduction of the A220 will also see the advent of the airline’s “Nicest” cabin, the term Breeze will use for its premium cabin that, according to a statement from the airline, will be in a 2-2 configuration at the front of the aircraft. Otherwise, passengers will have the opportunity to select from regular “Nice” seats or extra legroom “Nicer” seating on both the airline’s Embraer and Airbus aircraft. 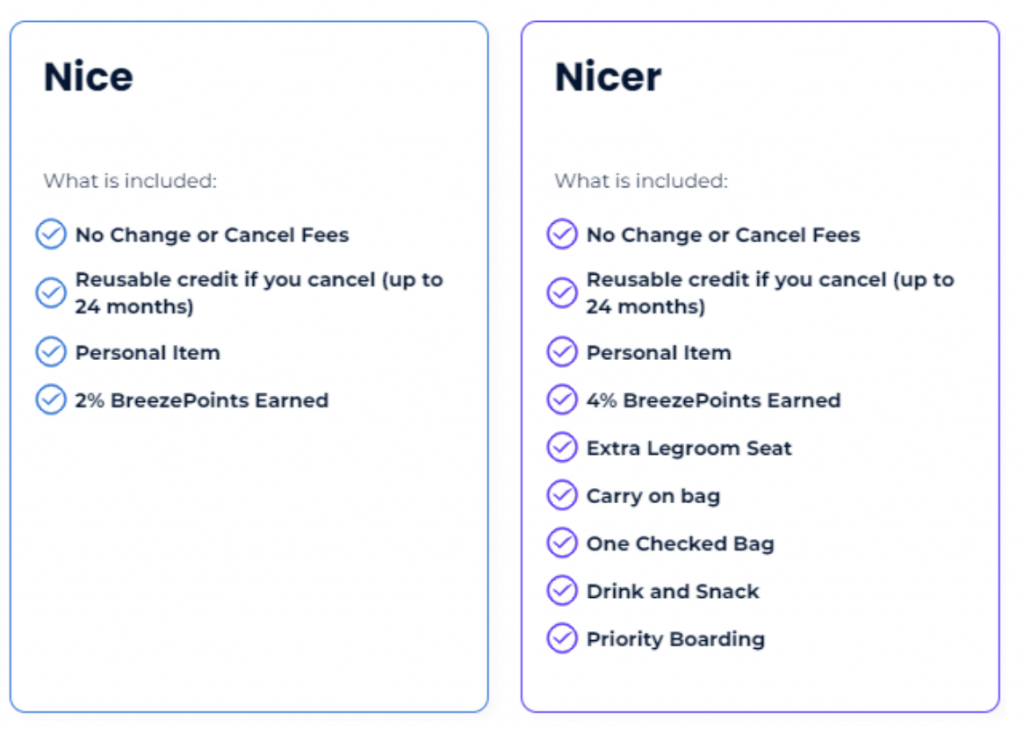 The airline is also introducing a frequent flyer program called BreezePoints. Unlike many other programs, BreezePoints will allow passengers to use those points to purchase not only flights but also to pay for add-ons such as seat assignments, checked and carry-on bags and other ancillary fees.

Similar to other low-cost carriers, Breeze is offering passengers a bare-bones base fare. Breeze passengers will be able to purchase seat assignments — starting at $10 for everyone except families, who can sit together for free — in advance or wait until check in to avoid the extra cost.

In that same vein, any luggage other than a single personal item, a carry-on that could be placed under a seat, will serve as an additional cost. The airline will charge $20 each way for up to three bags, whether checking or carrying on.

Notably, Breeze’s routes are all to and from cities located in the eastern U.S., even though the carrier is headquartered in Salt Lake City, Utah. While the airline is slowly working its way up to what is expected to be a route network that spans the entire country — and likely spans international borders — the airline will not, at least in the next few months, have the opportunity to compete with the other U.S. startup that has been making headlines with its 2021 launch: Avelo Airlines.

Avelo, the Burbank, Calif.-based low-cost carrier that is a brainchild of a number of former industry executives and is headed by former United Airlines CFO Andrew Levy, has begun operating in much of the western U.S. with a business model that is similar in some ways to Breeze’s.

Avelo operated its first flight just a few weeks ago, meaning these two airlines are truly both in their infancy. The months ahead will offer the first clear sign of whether they have found a sustainable business model or will have to do a little more legwork to carve out their respective niches.

If they’re both able to work through the growing pains of starting a new airline in a market dominated by a few massive — and until early 2020, massively profitable — super-carriers, the airlines will be set on a crash course as they continue their broad expansions.

Neither Levy nor Neeleman is likely to back down from that battle, and the U.S. aviation market may be in store for one of its more interesting battles since airlines consolidated themselves throughout the 1990s and 2000s.

Of course, the moment where they meet is at least months away, as Breeze and Avelo look set to stay confined to their respective regions for the months ahead. And it’s possible they stay that way, just as with how Alaska Airlines and Neeleman’s own JetBlue have seemingly found success among a largely West Coast-based and East Coast-based clientele, respectively.

But both Breeze and Avelo are young and ambitious as the new players in the market are expected to be, and there’s plenty of reason to believe today’s announcement by Breeze is just its first move in what will almost certainly be a very long game between the two.