Since Nov. 1, Cathay Pacific Airways flight CX841 service from New York’s John F. Kennedy International Airport to Hong Kong returned to Russian airspace due to a strong high altitude headwind in the temperate zone. Previously, such weather has caused the flight to divert to Taipei to fuel up. Cathay Pacific had previously avoided Russian Airspace since the beginning of Russia’s Invasion of Ukraine.

Cathay Pacific used Airbus A350 XWBs to operate the flight from New York to Hong Kong. The flight is among the longest flights in the world. Normally the flight would take more than 15 hours runway-to-runway. However, with the strong headwind and the detour to avoid Russian airspace, the flight recently took an astonishing 17 hours to arrive. On Oct. 19, the flight confirmed its diversion to Taipei only a moment after it took off. The weather conditions were harsh enough to make the situation clear even at the beginning of the flight. 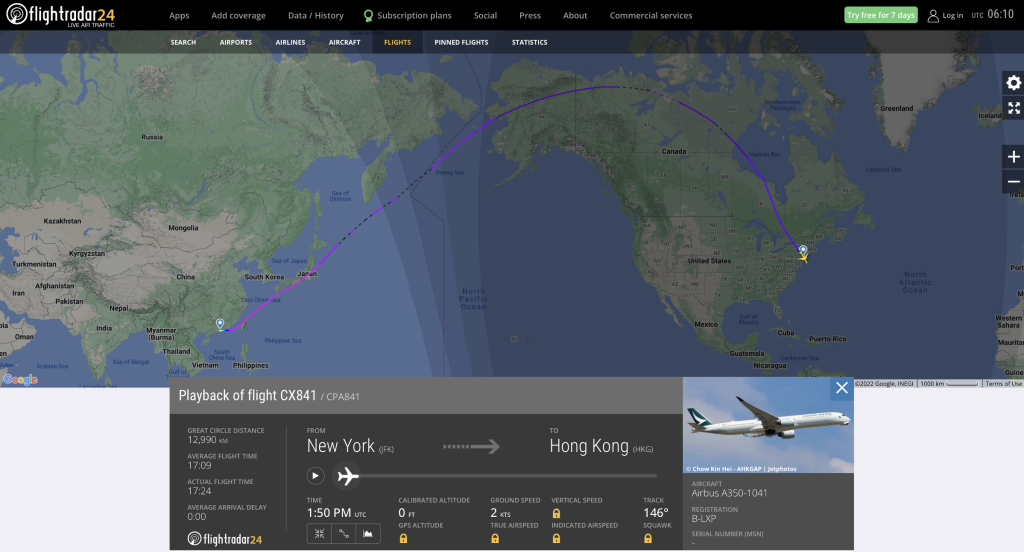 Due to the temperature difference between the tropical area and polar area of the earth, in addition to the rotation of the earth, there’s always a wind moving from west to east in the temperate zone, and it’s called the Westerlies. The wind is especially strong during winter time in the northern hemisphere. Such a strong headwind will prolong the flight time of westward long-haul international flights, making some flights unable to operate with the original plan.

To mitigate the situation created by the Westerlies that a route becomes inoperable for a type of aircraft, airlines may add a stop to fuel up, or, unload some passengers or cargo to reduce the fuel consumption rate. In this case, Cathay Pacific has a major operating hub in Taipei, and not many passengers would volunteer to delay their travel even with high-value vouchers.

Since the Russian invasion of Ukraine, many carriers have chosen to avoid Russian airspace. Russia, on the other hand, has also banned carriers from “hostile nations” to pass through Russian airspace. Such a situation has made flights between the Far East and the western hemisphere longer, and some even inoperable. Lufthansa, Air France, KLM and other major European carriers rerouted their flights to Asia via the Middle East and Central Asia. Such routing made the operating cost of Asian flights even higher under the global inflation situation.

As Russia’s invasion of Ukraine has no end in sight, a large portion of the world’s most crucial airspace will remain unusable for many carriers around the world. Such a situation is negative for the world’s recovering aviation market. Cathay Pacific was forced back to Russian airspace as the northern hemisphere is entering winter, but it’s unknown how many other airlines will or can choose to do the same.