The resumption of services ends their almost seven-month suspension. In February, Air Canada paused operations to Mexico and the Caribbean at the request of the Canadian government. Since Air Canada Rouge primarily served these destinations, Air Canada suspended its operations.

The leisure carrier relaunched on September 7 with flights between Toronto and Las Vegas, Orlando and Regina.

Later this month, Air Canada Rouge will reintroduce other destinations. These include Cancun and Tampa.

Jon Turner, Air Canada’s Vice President of Inflight Services and President of Rouge Operations, said in an airline press release: “Air Canada Rouge remains integral to Air Canada’s overall strategy. As we emerge from the pandemic, we anticipate increased demand for vacation travel and from customers flying to enjoy overdue visits with family and friends.”

“Air Canada’s leisure airline is ideally suited to serve this market with a compelling array of leisure destinations and an inviting travel experience so that the holidays begin as soon as customers board an Air Canada Rouge aircraft,” continued Turner.

Air Canada Rouge operates all its flights with narrowbody Airbus aircraft, including A319s, A320s and A321s. Onboard WiFi is available for purchase, and every aircraft is in a two-class configuration featuring Premium Rouge and Economy.

Along with its announcement of service resumption, Air Canada Rouge also shared a look at an upcoming cabin interior.

Nine A321s of its 39-aircraft fleet will feature a new interior design, the first entering service later this fall.

The new design features playful Rouge brand accents and leather seats, with a 30-inch pitch in Economy. The A321s will also offer upgraded personal power options, including USB-C ports and an electronic device holder integrated into the seatback. 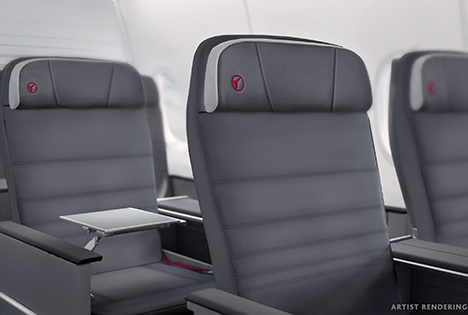 Customers can also benefit from upgraded entertainment streaming, no longer needing to download an app to stream content. Complimentary television and movies are now available to stream directly from their device’s web browser. Alternatively, customers in Premium Rouge can borrow a complimentary, sanitized iPad to stream content.

Rouge flight attendants have also received a new uniform more in line with the mainline Air Canada uniform. The leisure variant, however, has new neckwear and brevets to represent the Rouge brand.

Before the pandemic, Air Canada Rouge also flew to select long-haul destinations. These included leisure-heavy destinations across Europe such as Athens, Edinburgh in Scotland and Venice in Italy.

However, in June 2020, Air Canada retired its last Boeing 767 amidst the COVID-19 pandemic. As a result, its leisure airline no longer has a fleet to fly further away.

Air Canada’s Chief Financial Officer, Michael Rousseau, said in a quarterly earnings call in May 2020 that international leisure markets would be served by “mainline 330s and 777 high-density” aircraft.

Rousseau went on to say that Rouge would “continue to be an integral part of Air Canada, albeit as a primarily a narrowbody operator into leisure markets.”