This is Part Two in a short series of trip reports aboard European ultra-low-cost carriers. To view Part One, click here.

I don’t think I need to say much about Ryanair. The juggernaut of affordable travel revolutionized forever how people fly in Europe, defying legacy airlines and lowering fares significantly.

I had thought my first flight with them would be on a trip to Greece I had planned for September, but I needed to change my plans for a trip to Sicily. I was invited to try DAT Volidisicilia, a regional airline that operates essential flights there (that trip report will be coming soon), and thought connecting in Catania, Italy with Wizz Air would be possible, so I bought a ticket from Pisa, Italy to Catania flight with them, connecting into a Catania to Olbia, Italy segment with DAT.

Some two weeks before the flight I received an email saying that the DAT flight would leave Catania earlier, which would make the connection impossible. (Later I discovered it would already be impossible anyway since the time on the ground would have been too short).

Then I had to resort to Ryanair. Since they dominate the national market, they provide a high number of frequencies on a couple of trunk routes. This was also true in the Pisa-Catania market, where on some days they have four separate flights, while Wizz only operates four a week.

I had already booked with them before and had extensively searched for fares on their website, so the booking itself was quite straightforward. Ryanair has my favorite website among ultra-low-cost carriers. It’s so simple to find the best fares and to insert your data, and the process of dodging the ancillaries is not as painful. 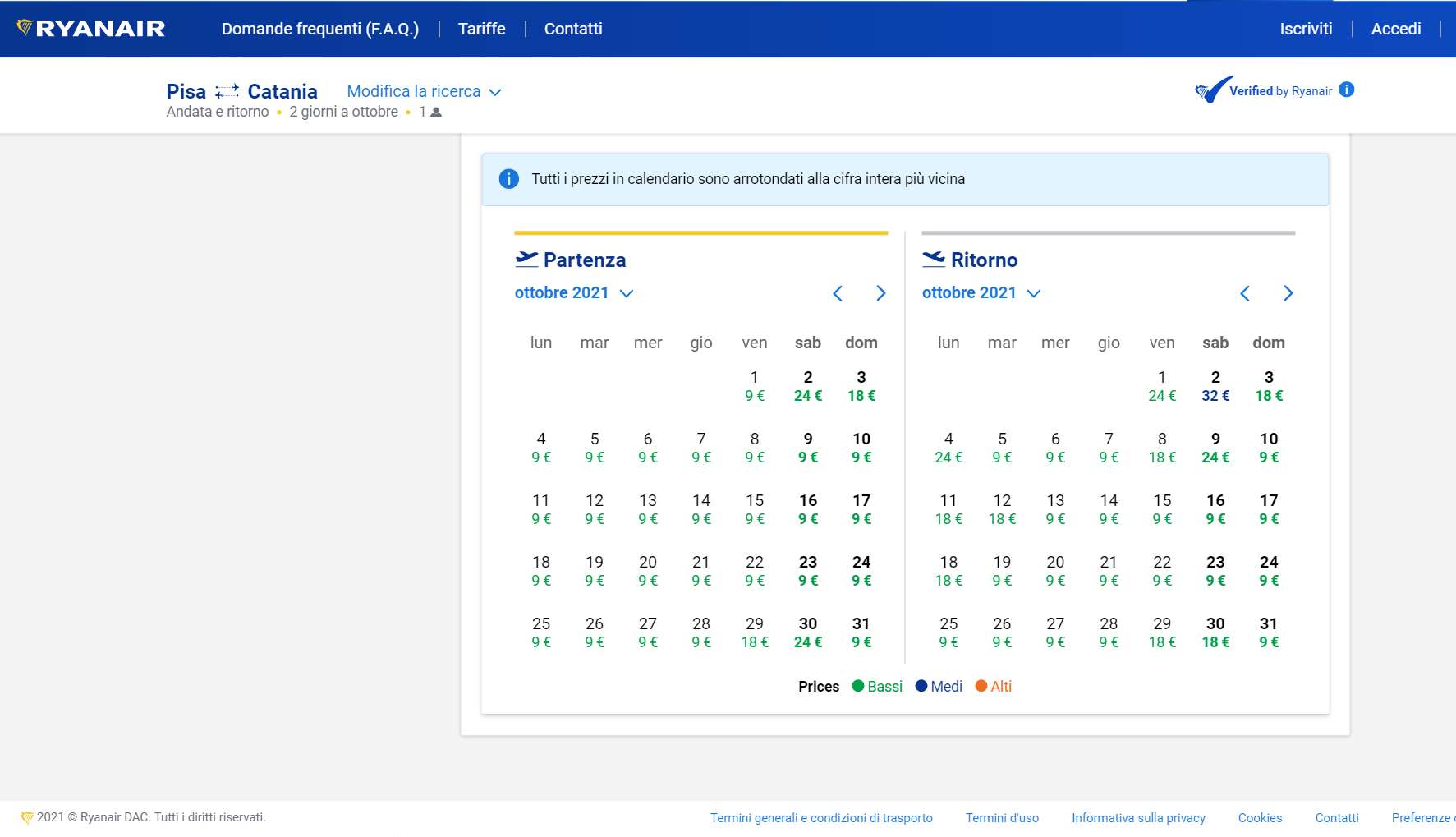 In the end, I booked my ticket to Catania on the first flight of the morning for 21.99 euros ($26) ten days before the flight, which was not a bad deal and a relief. If it was too expensive, I would have been in trouble.

The night before my flight, I did my check-in via Ryanair’s app, which I found to be incredibly lean, and in just a couple of minutes, I was ready to go the following morning. I woke up at 3 a.m. to take a taxi from my bed and breakfast to the airport at 4:10 a.m. In 20 minutes I was at the departures area of Pisa Airport. 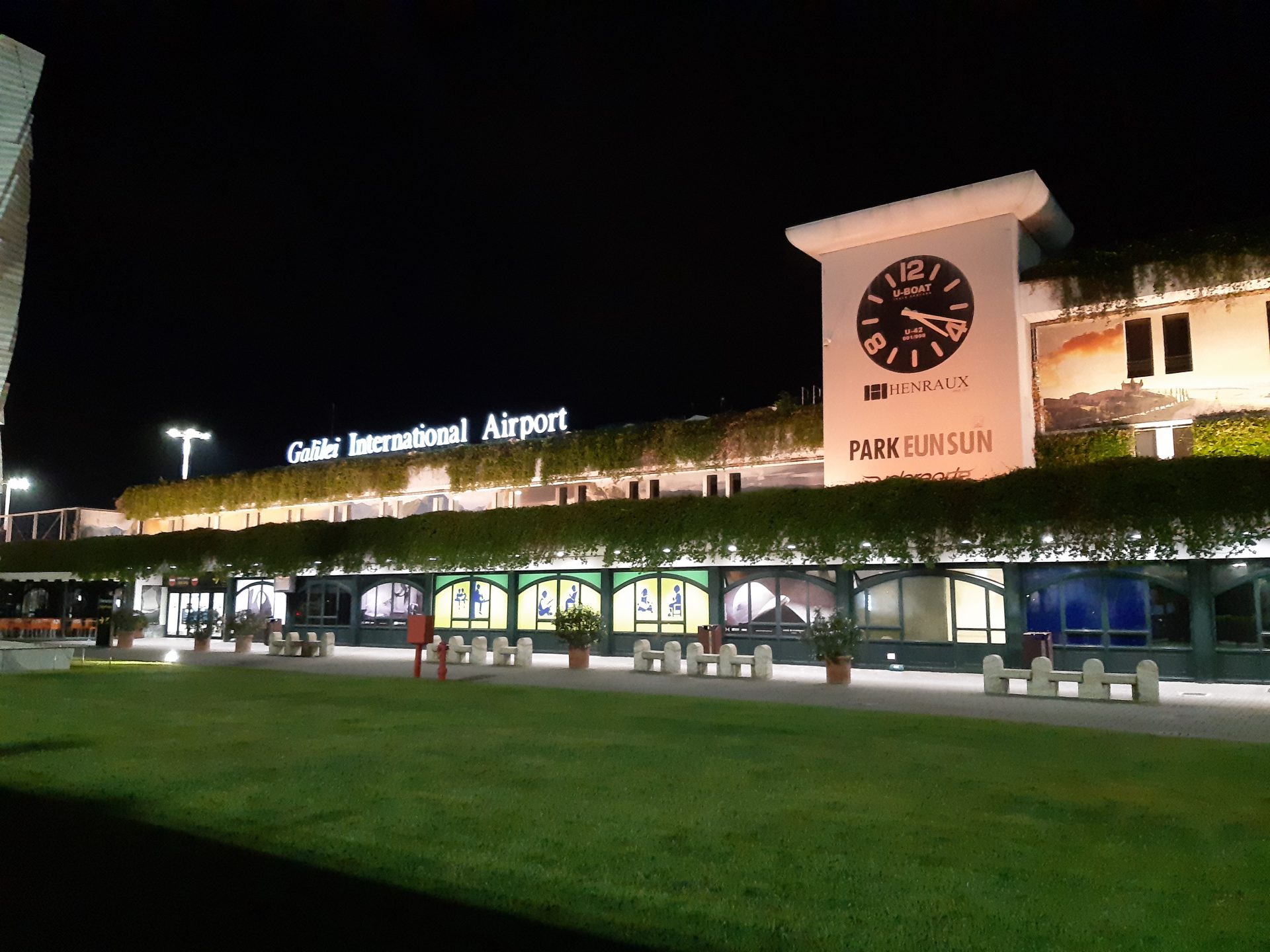 I’m not very familiar with the topic of Italian infrastructure yet, but Pisa Airport is managed by the same company — Toscana Aeroporti — that manages Florence Airport. For whatever reason, though, the ultra-low-cost carriers only operate from Pisa with Florence receiving mostly the legacy carriers and their low-cost affiliates. 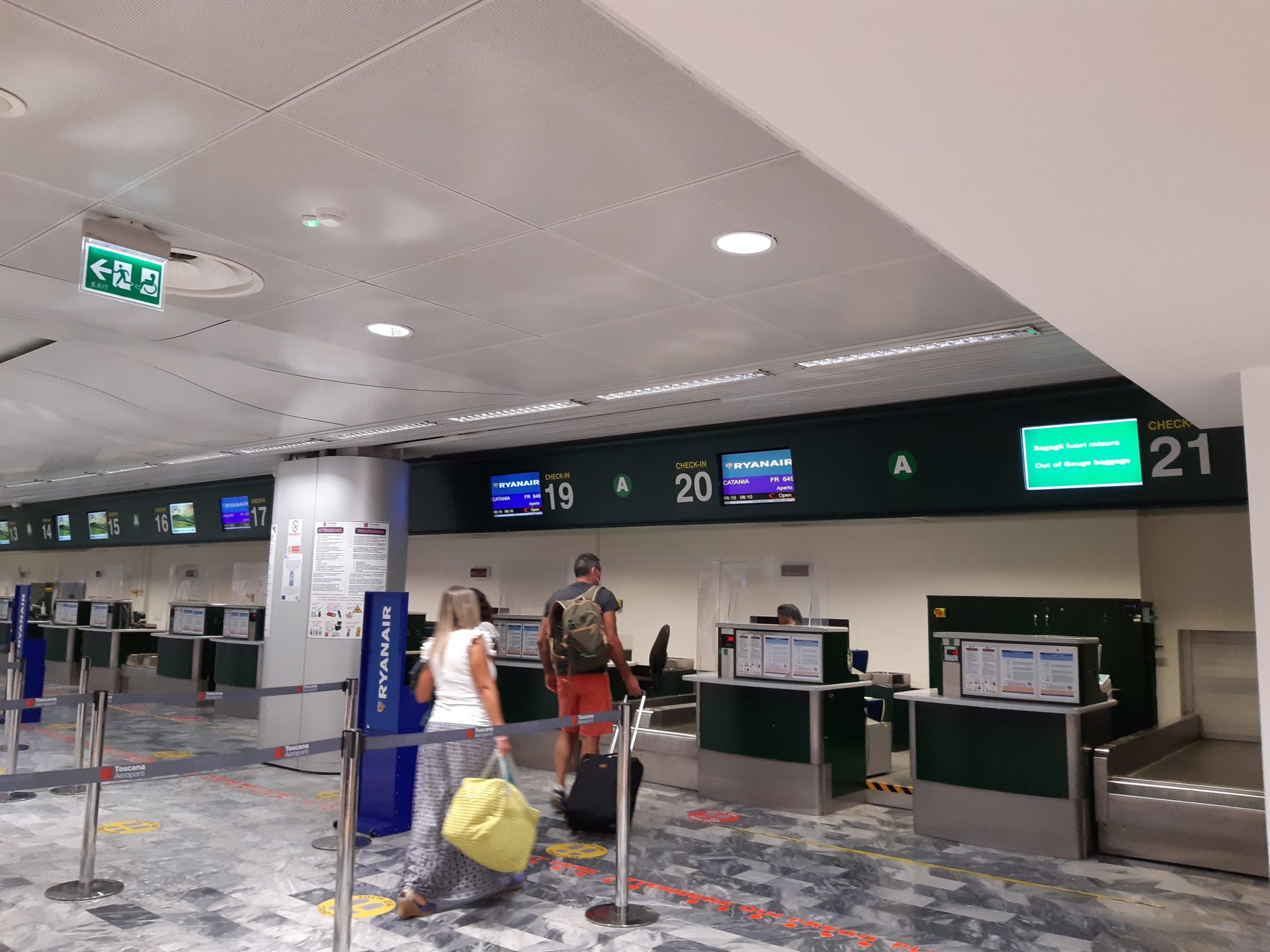 As a result, Pisa Airport won’t ever receive a five-star Skytrax rating or anything near that, but it does its job. The terminal really gets full during the rush hour though.

Nevertheless, because my flight was the first of the day, I cleared the safety screening very fast. In fact, the automatic boarding pass check wasn’t even open, and an airport worker at the entry of the screening area cleared our tickets. 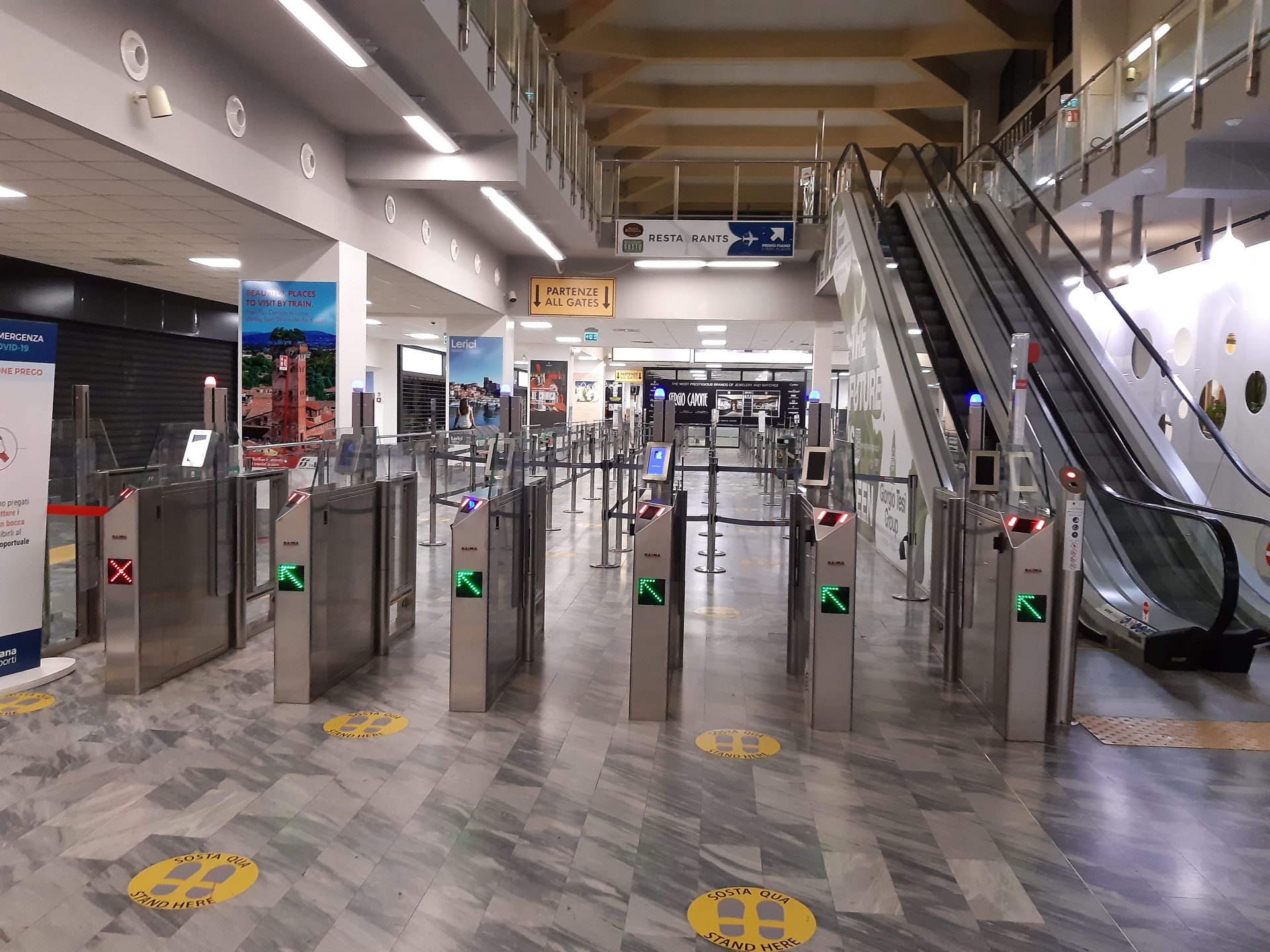 The flight left so early that once I got on the airside, the food shops were not even opened. They did open a little bit before my boarding though, so I could grab a coffee to wake me up for the long day that was about to come.

Ryanair has a big operation in Pisa, which could be seen on the airport’s screens. 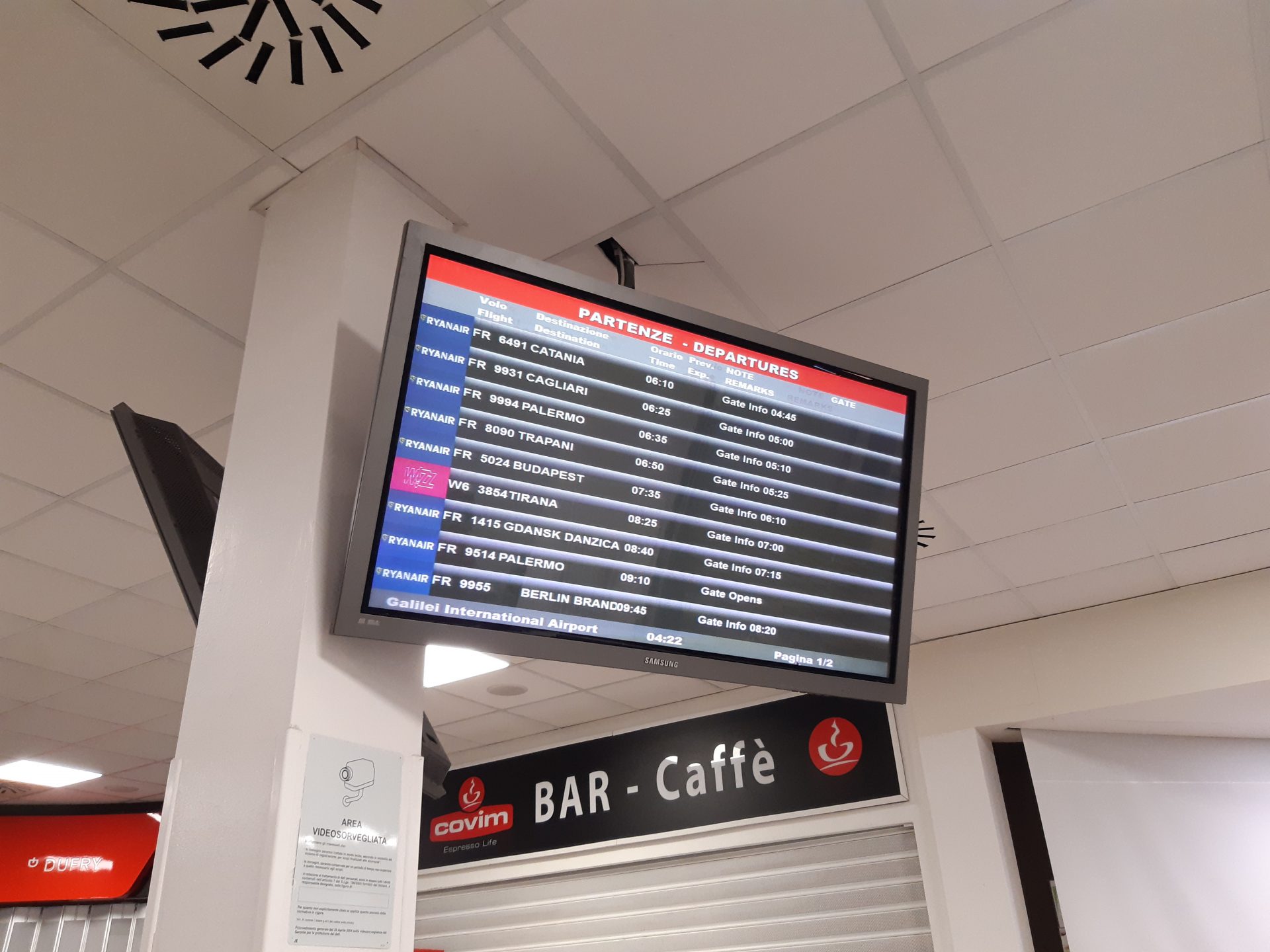 Thankfully my aircraft would be boarded in a remote position that is close to the terminal building, so buses would not be needed. This, however, prompted the boarding to be made in a separate airside area. 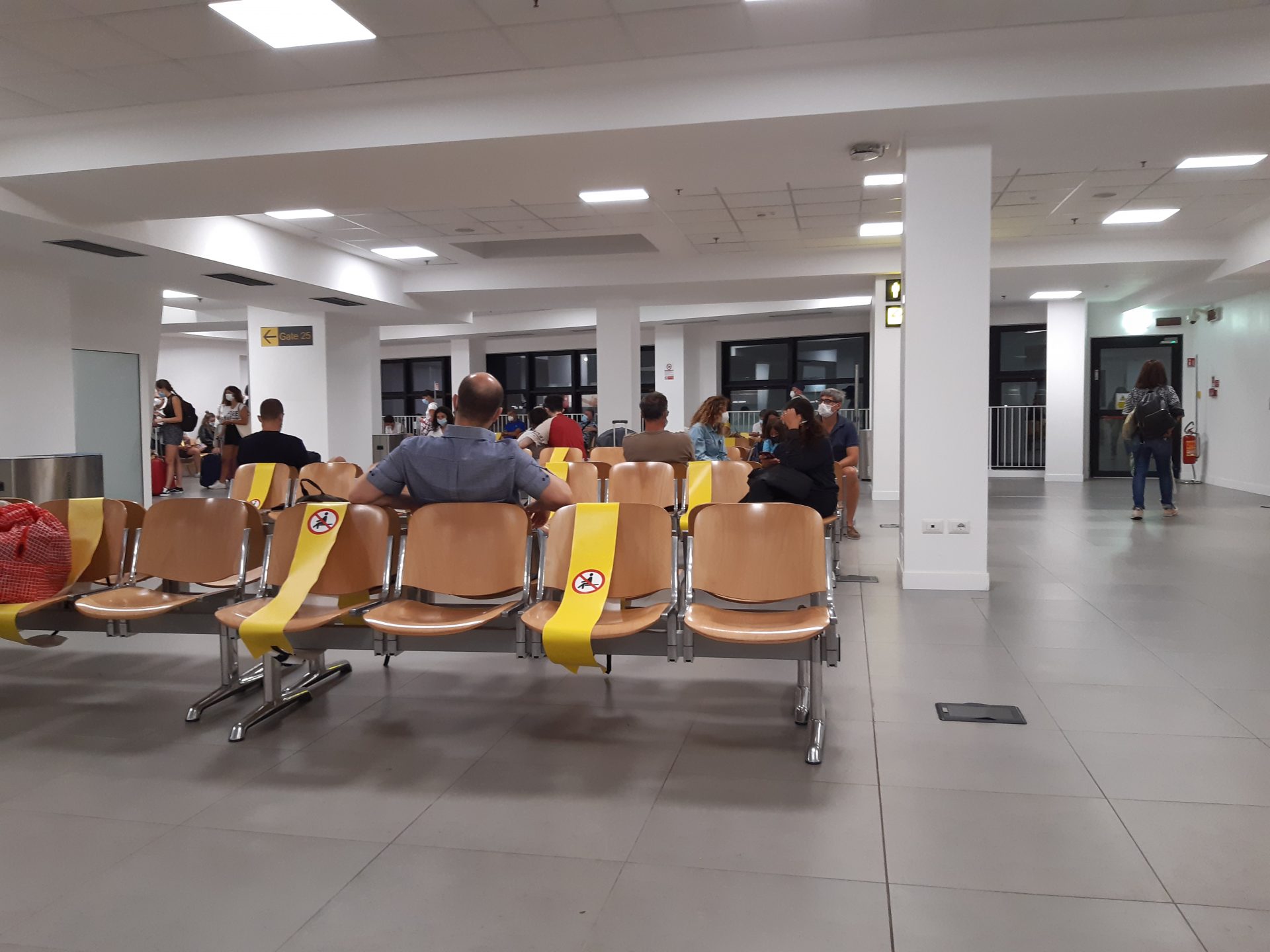 The fact that the aircraft overnighted in Pisa also meant any delay, save for a maintenance contingency, was virtually impossible, so boarding was started with less of a rush at 5:31 a.m.

As an ultra-low-cost carrier, Ryanair takes matters very seriously when it comes to the size of luggage: Passengers that pay for a cabin bag have priority of boarding, whereas the ones that don’t have to stay in the “normal” line. As I didn’t pay for it, I stayed drinking my coffee until the line shrank. 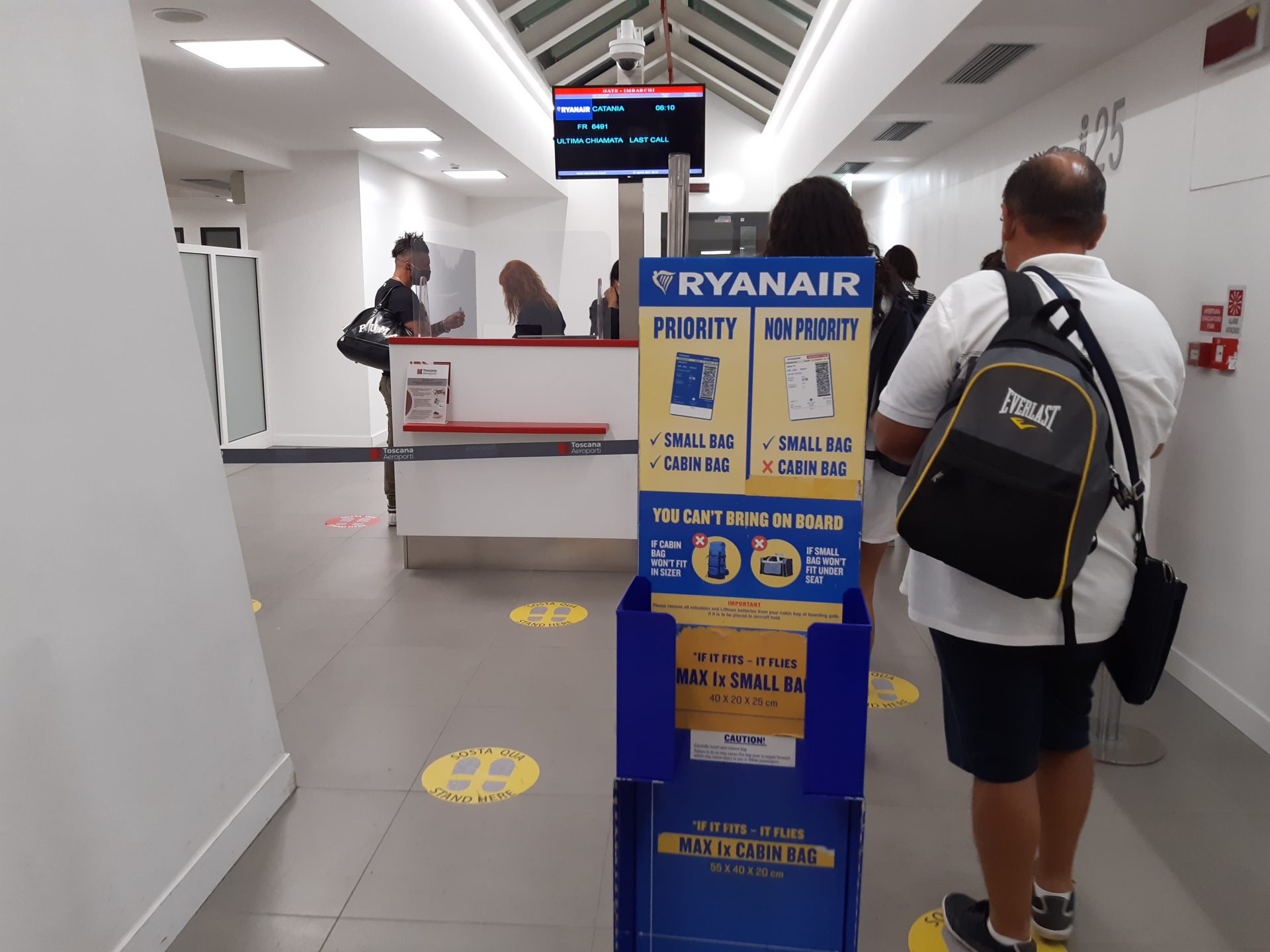 As an ULCC, Ryanair takes the size of luggage quite seriosuly. (Photo: AirlineGeeks)

My flight today would be operated by 9H-QBG. According to Airfleets, it was delivered to Ryanair in October 2017 as EI-GDG before being reregistered in Malta in February 2020.

Now theoretically, this flight was operated by Malta Air, a subsidiary of the Ryanair Group which got many of the group’s E.U. operations a while ago for an intricate matter of tax collections. However, besides the aircraft registration and the fact that flight attendants did mention the flight was operated by Malta Air, few would notice it was, as the branding, livery and everything else was Ryanair. 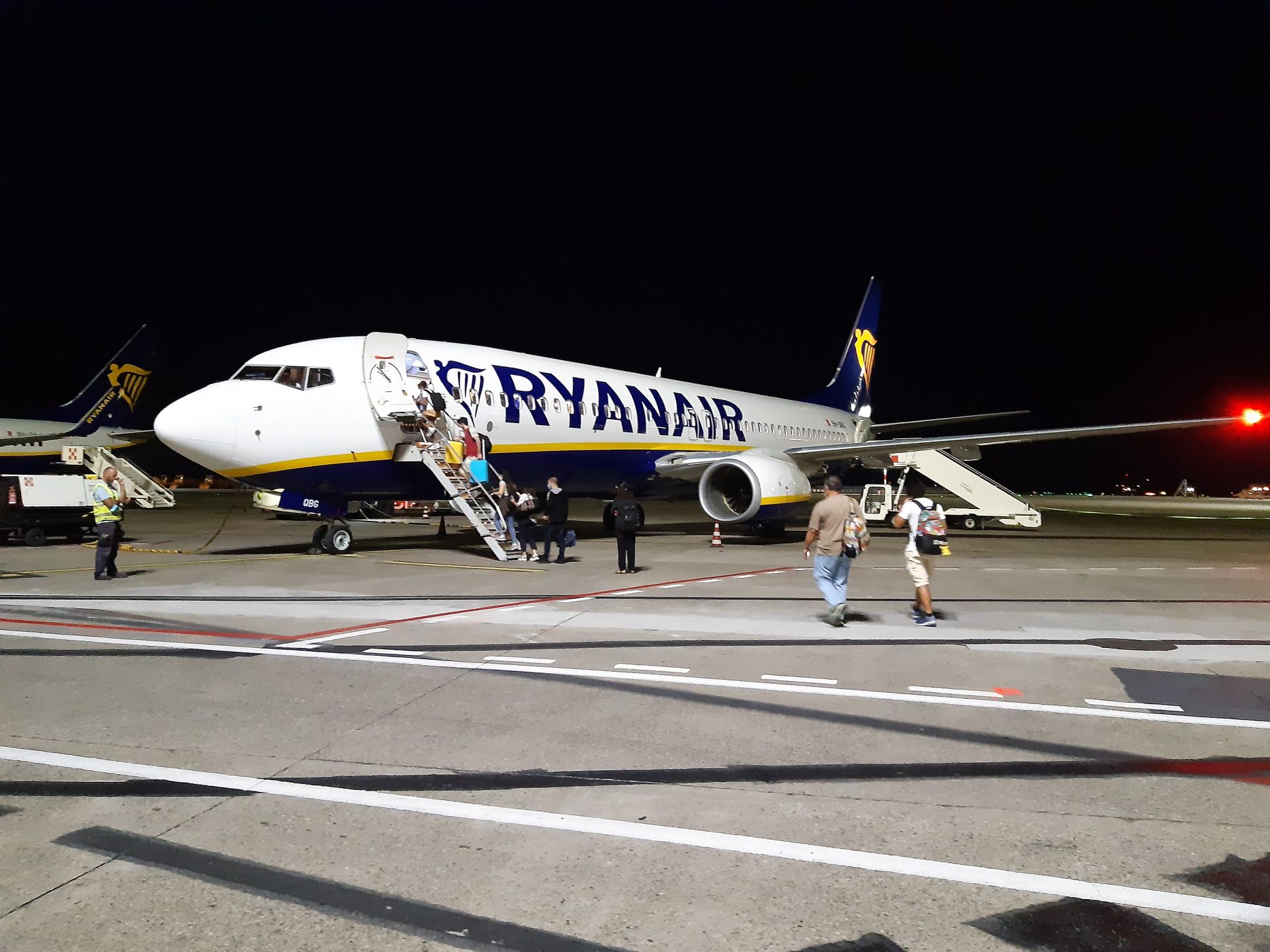 Of course, I love remote boarding, and at least this is something ultra-low-cost carriers almost always provide. I usually board through the back door because it’s less crowded, as I did this time. As a very new 737-800, 9H-QBG didn’t disappoint with its Sky Interior cabin. 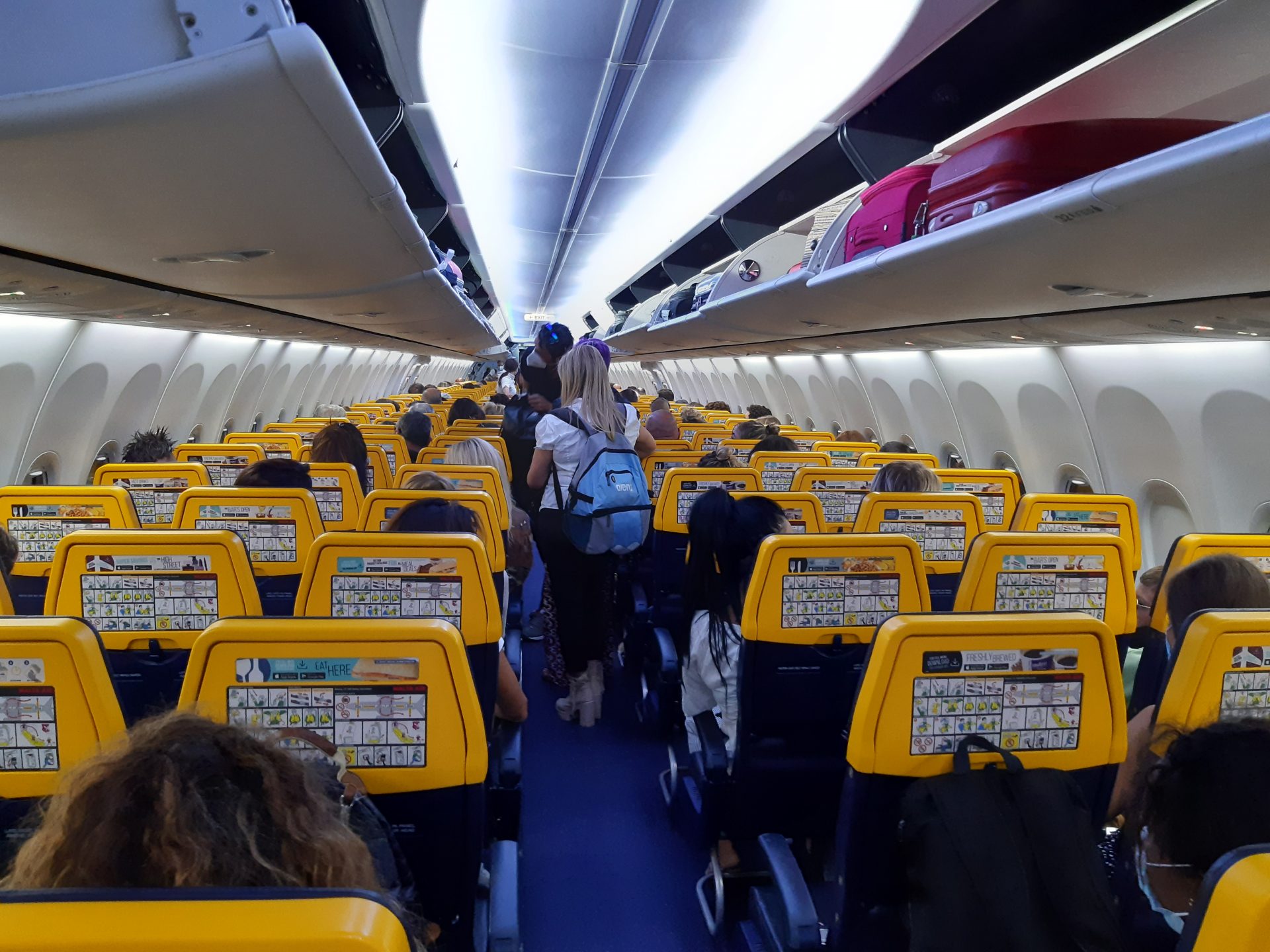 This time, I sat in 6C and asked the flight attendants if there would be any windows available. They told me to wait for boarding to be finished. At 5:59 a.m., eleven minutes before schedule, doors were closed. Thankfully, my entire row was empty, so I moved to seat 6A.

The flight had 135 seats occupied out of 189, which makes for a 71.4% load factor, way under the 82% average Ryanair registered systemwide in August.

Pushback was started at 6:01 a.m. and take-off, due to the very low traffic of the time very seamlessly, took place at 6:10 a.m.

At 6:20 a.m., onboard service was started. Contrarily to WizzAir, which in my two flights preferred not to serve hot food, RyanAir did. I asked for a hot sandwich, a large cup of coffee and one of their famous lottery cards, which unfortunately I did not win. 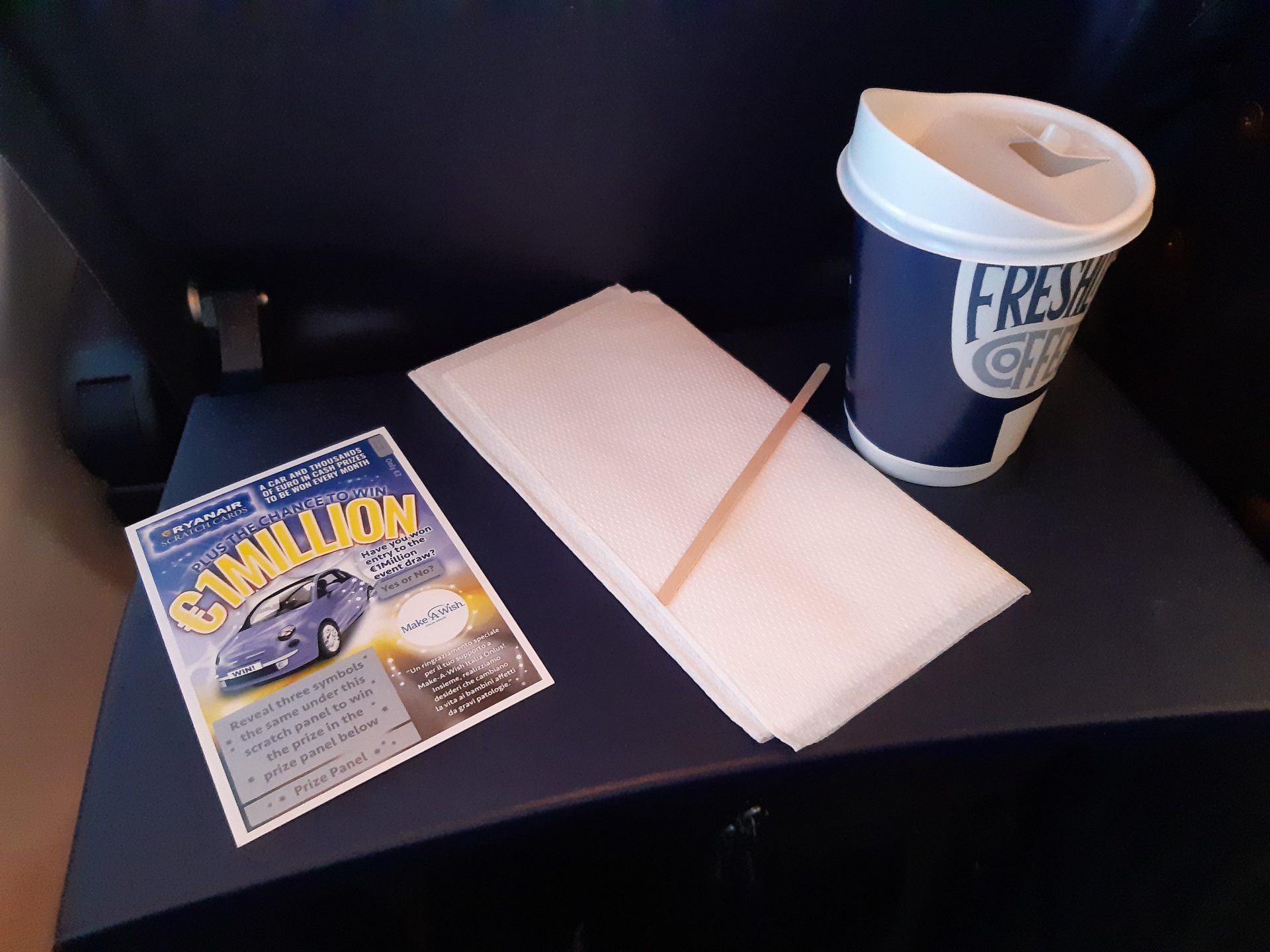 The flight attendant, who was very nice to everyone onboard, asked me for some more minutes for the sandwich, since they were warming it in the back of the plane. It did arrive, though, in five minutes or so. 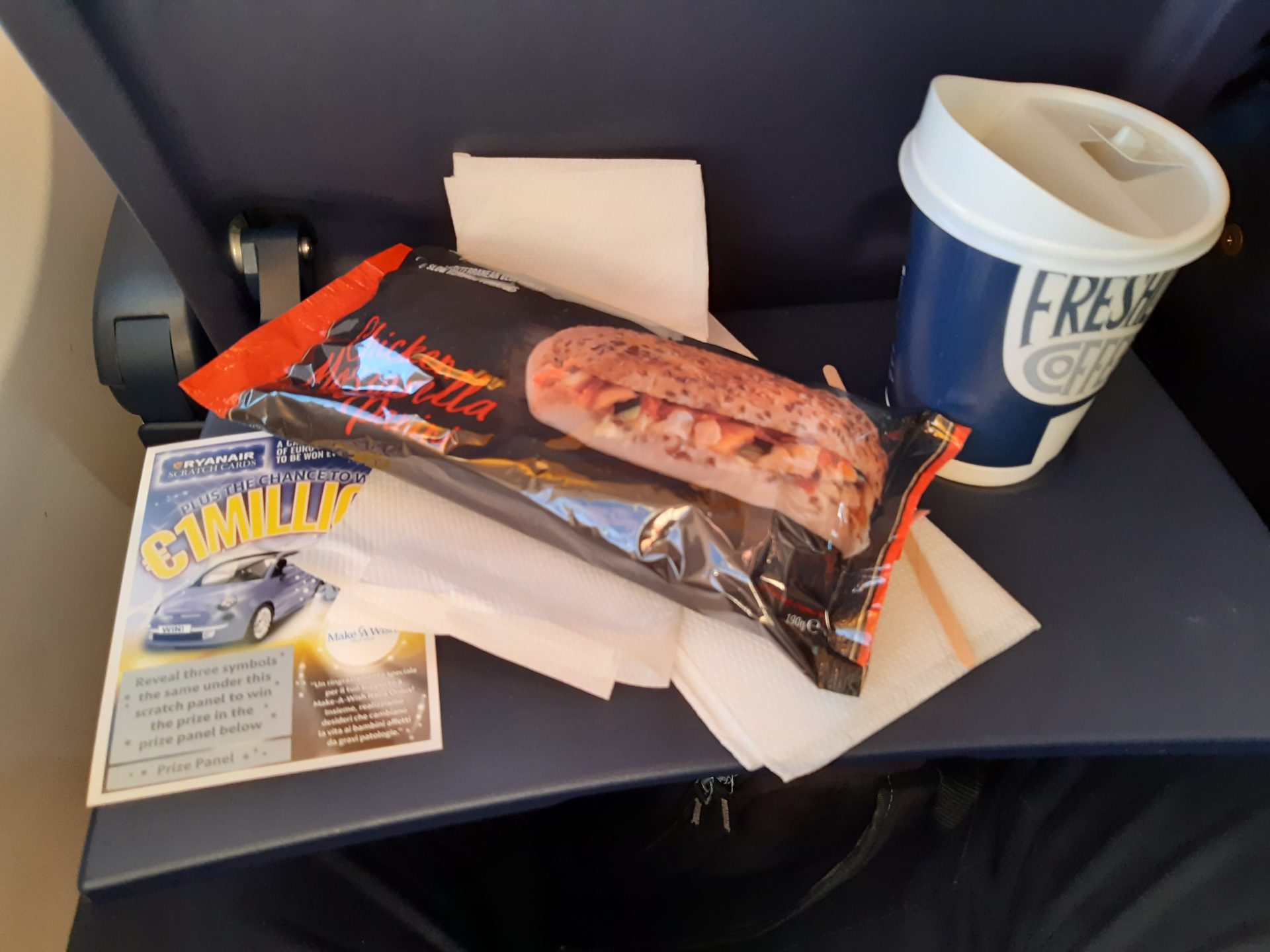 The sandwich arrived in plastic wrapping and indeed was very hot. Not the best sandwich ever, but still very much worth the price. 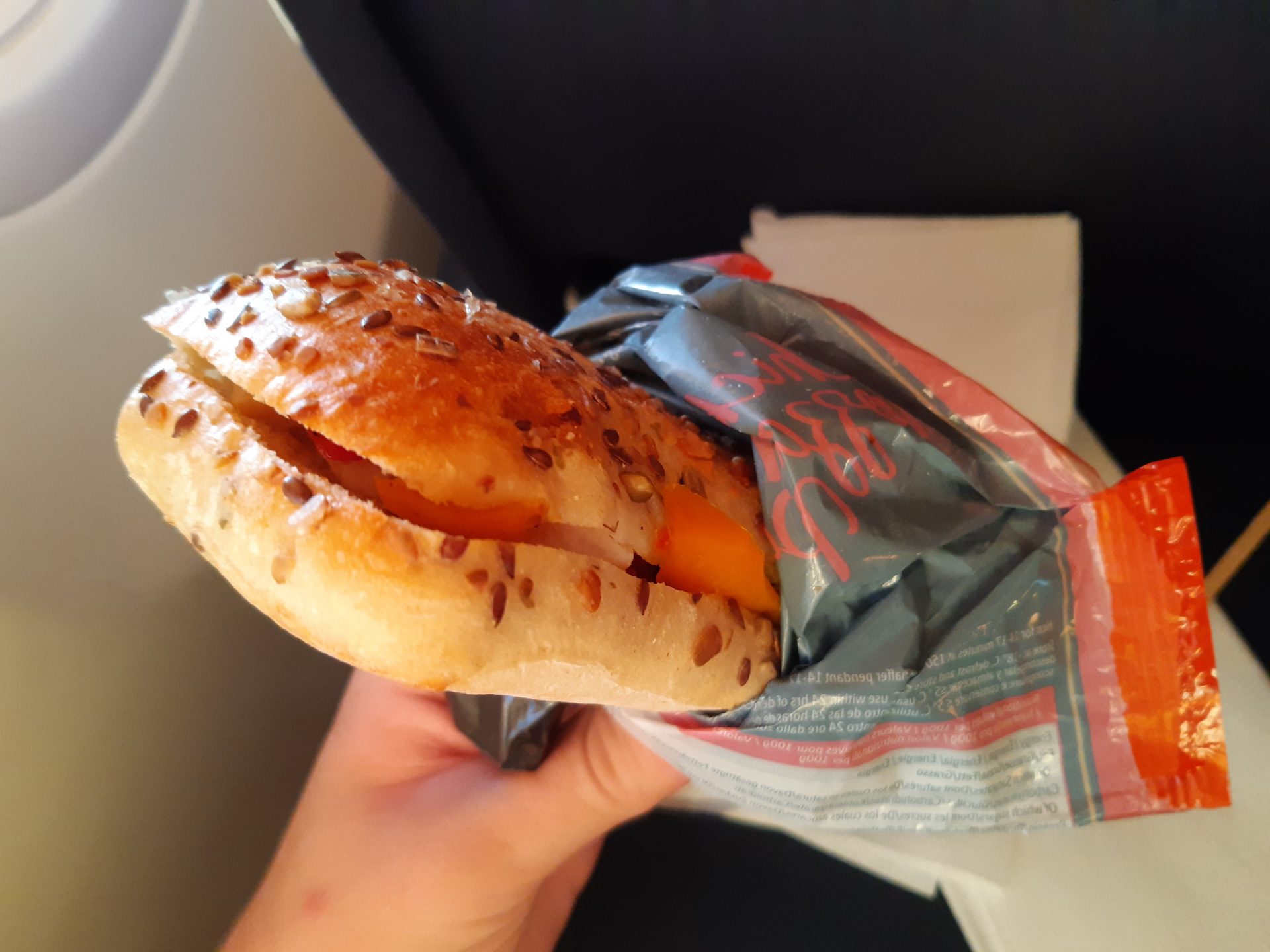 Out there, the sun started shining. That’s why these very early flights are worth it — they never get boring. 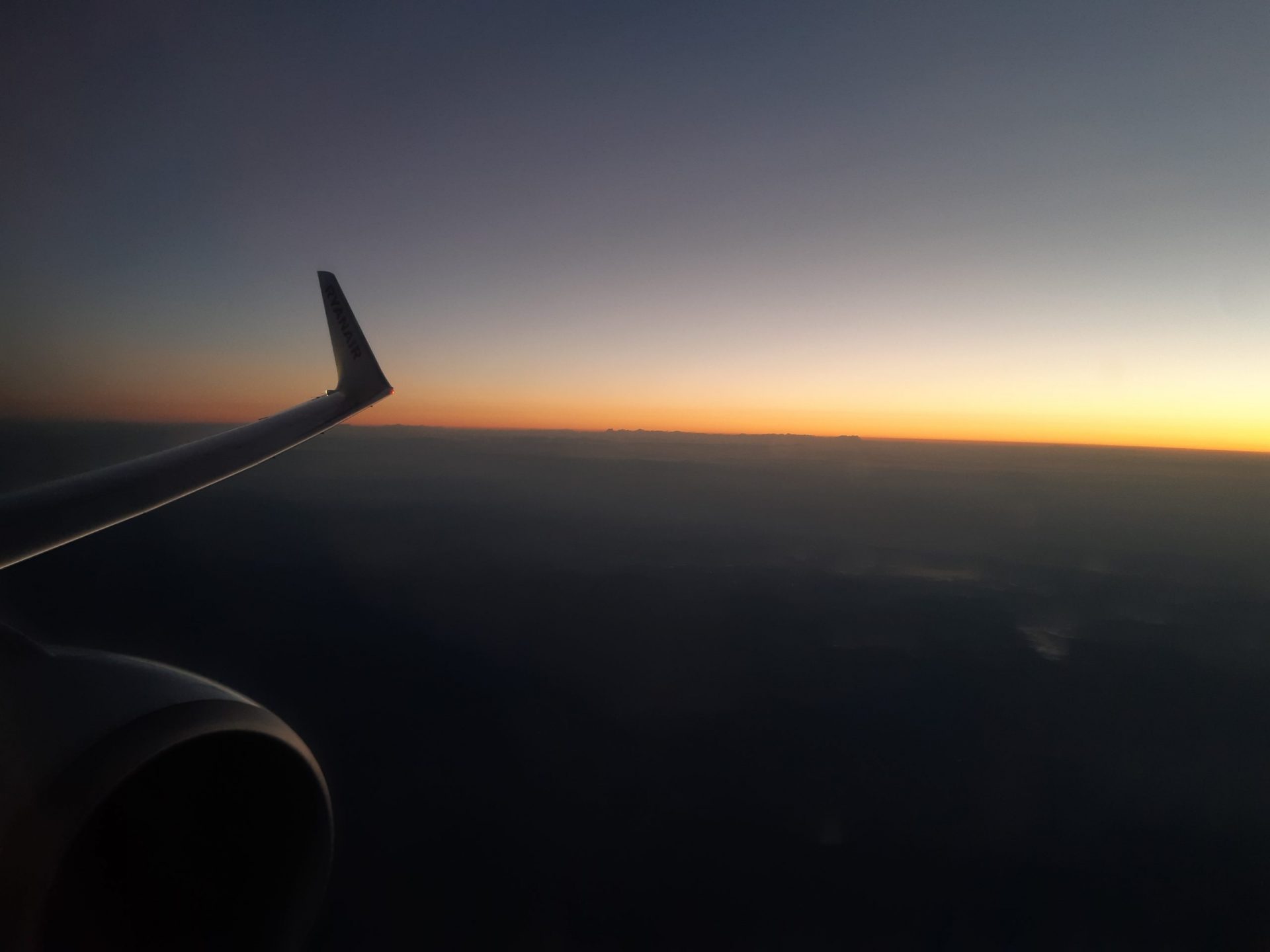 Now onto the aircraft: the Sky Interior onboard Ryanair’s 737-800s is simply phenomenal, way better than that horrendous, more yellow old cabin. The mood lighting always helps to give a more welcoming atmosphere to the flight’s phases. 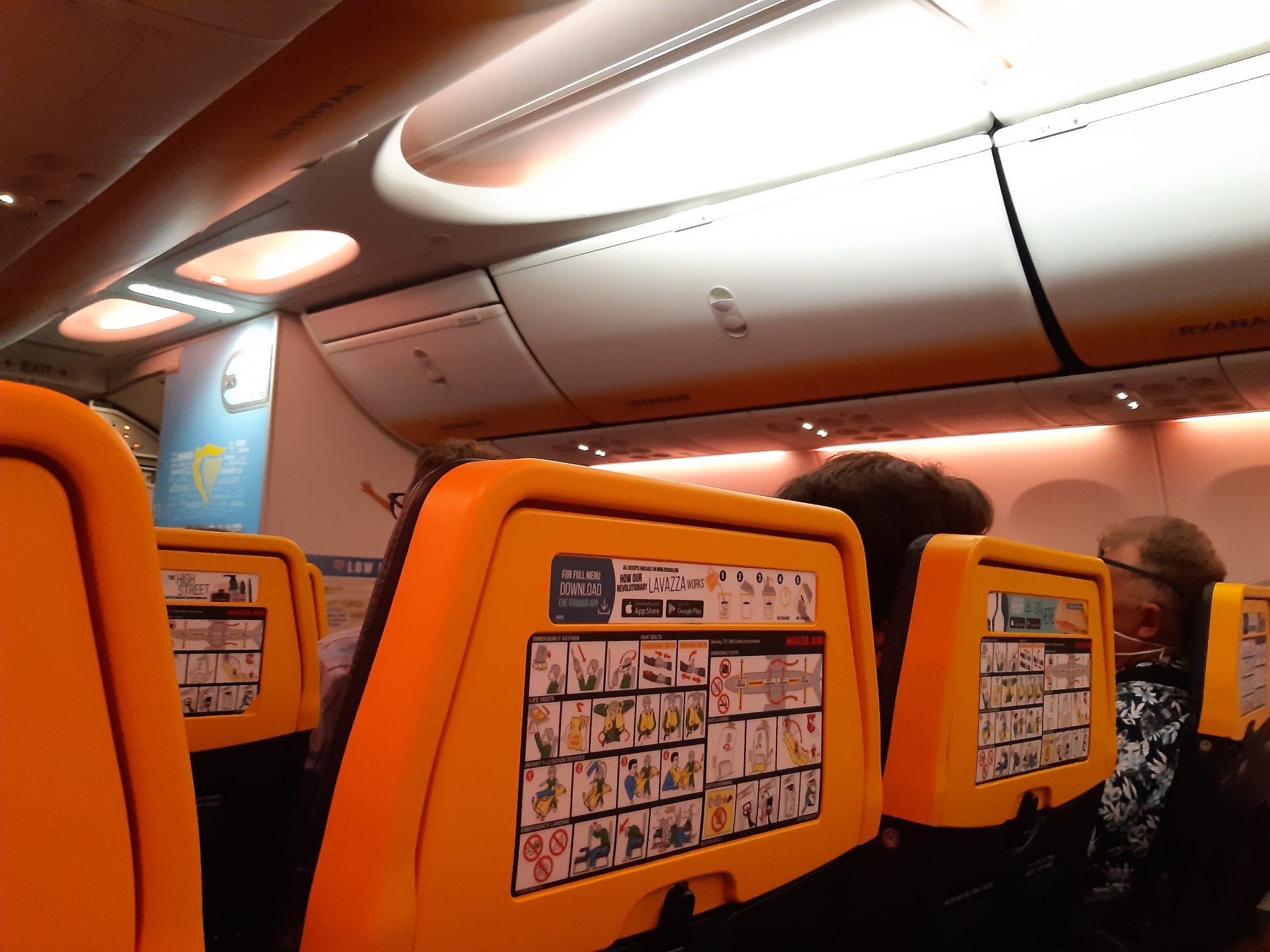 View from my seat onboard Ryanair’s 737-800 with the Sky Interior cabin. (Photo: AirlineGeeks | João Machado)

Seat pitch also looked okay for an ultra-low-cost carrier, though I never really have a hard time with any airline anyway. 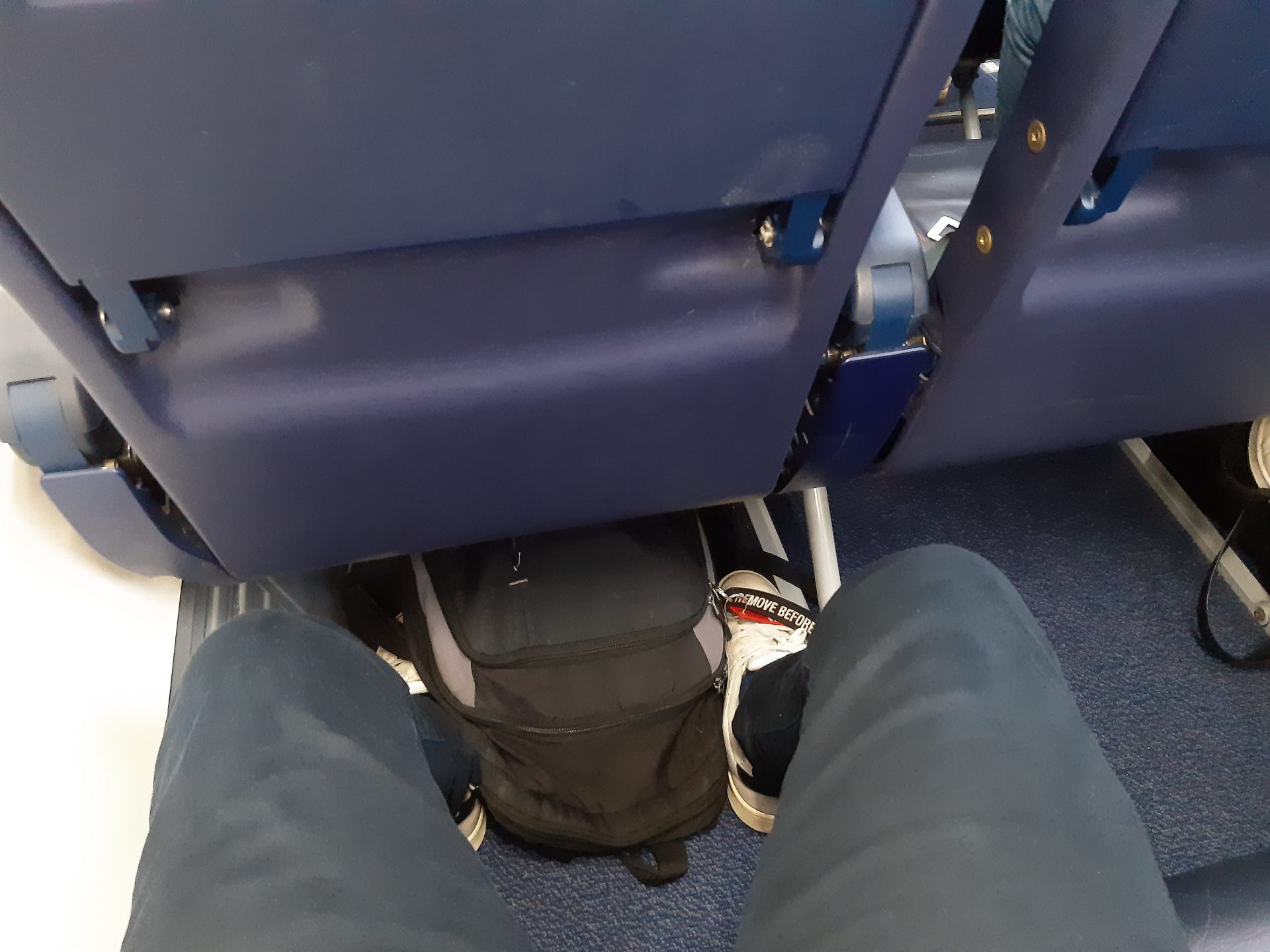 The fresh interior even made the safety instructions, that on Ryanair are attached to the seatback, look cool. This was another place of the aircraft showing Malta Air titles. Malta Air actually operates its Boeing 737-2800MAX in their full colors, all of which are based in Italy, funnily enough. 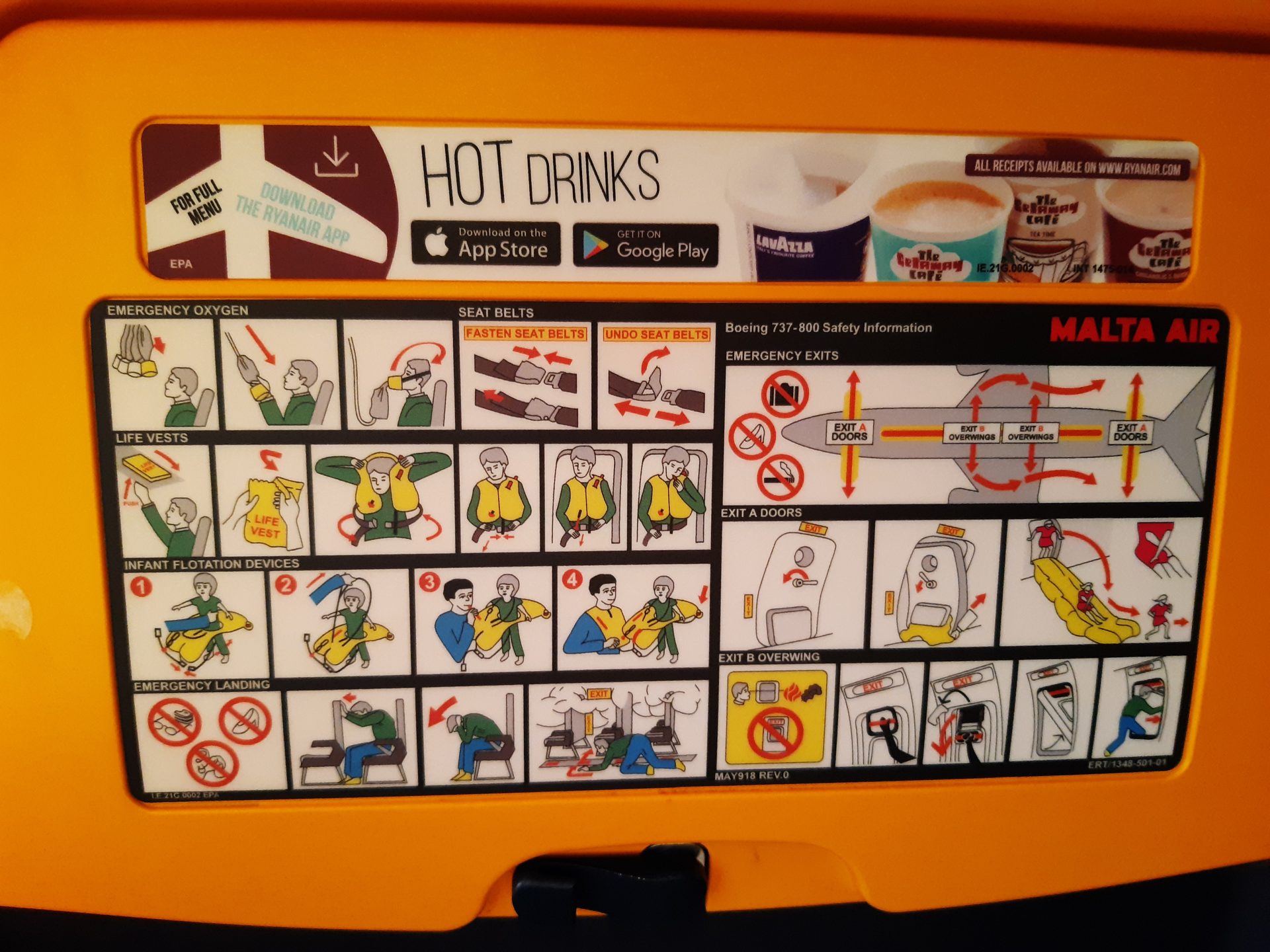 The bathroom was clean since it was the first flight of the day, though it was very tight, as airlines push to get more space for the actual cabin. At the front of the plane, this was the only lavatory, and by Ryanair’s Covid-19 policy, passengers had to ask permission for the flight attendants to head there in order to avoid gatherings and lines. 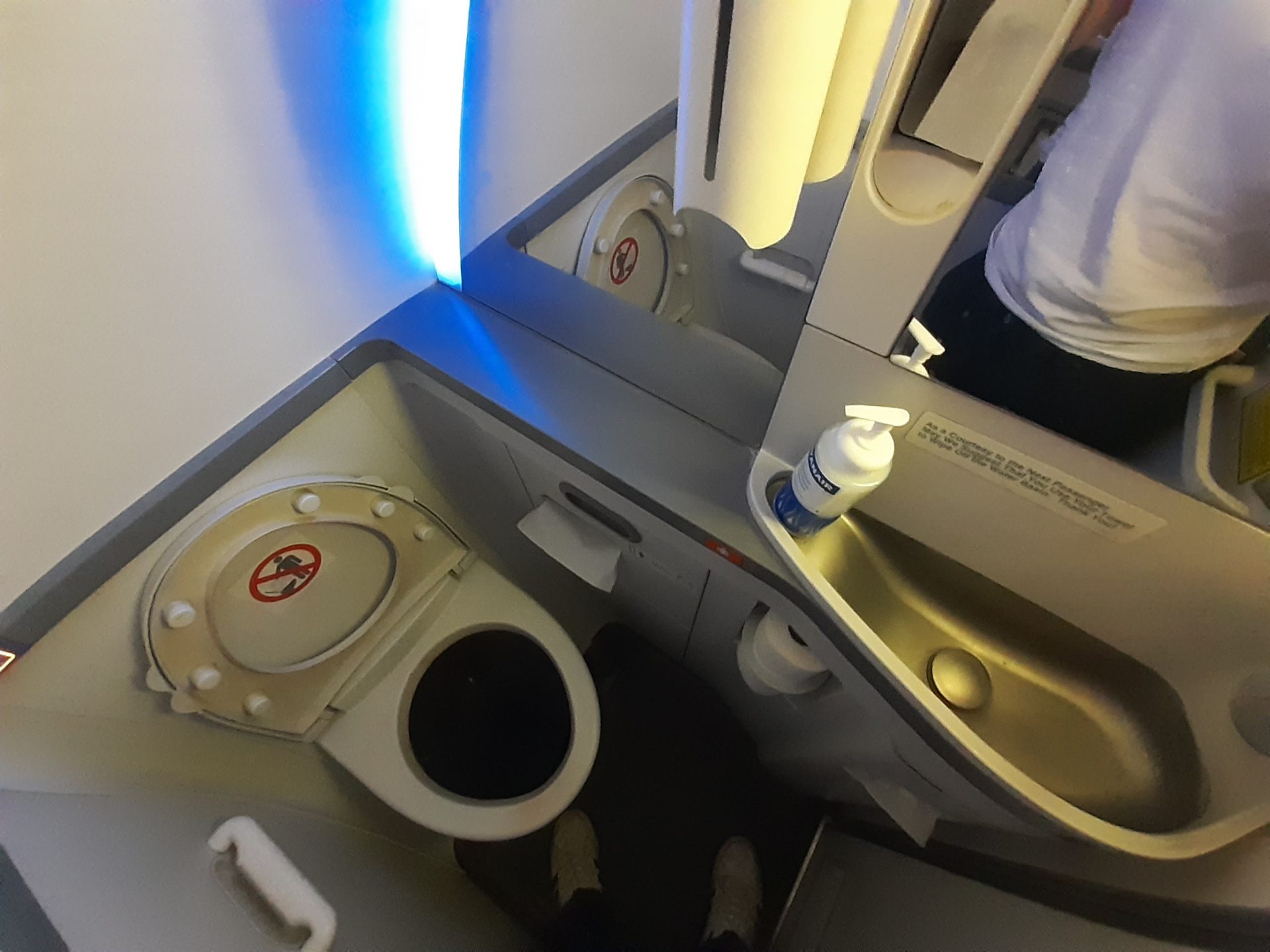 Back to my seat, the tray table was big enough for my (small) laptop. 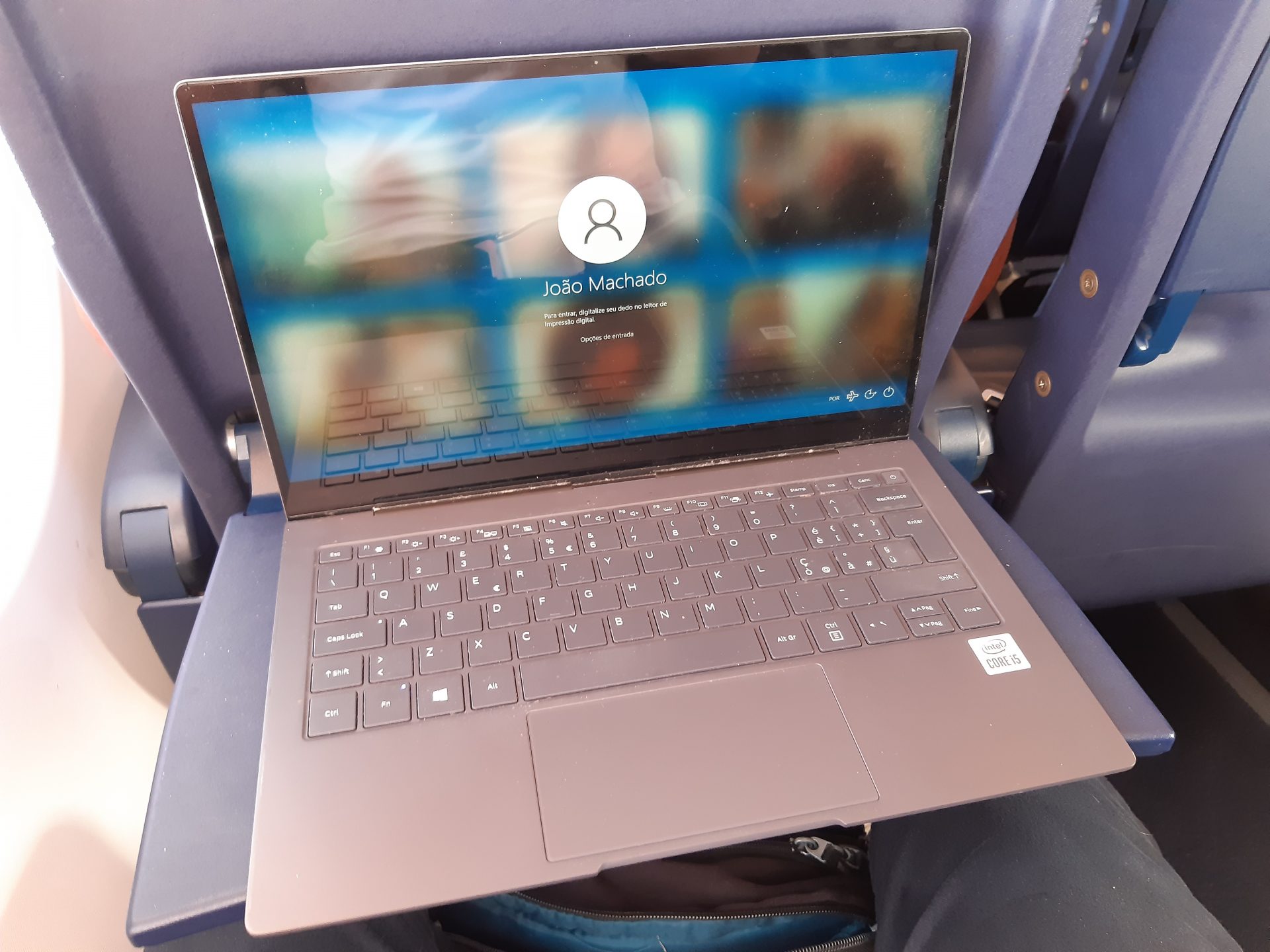 With a considerably light load, at 6:35 a.m., just 15 minutes after the onboard service was started, the duty free service was offered to passengers. I didn’t look at the catalog because I didn’t want to spend more, despite there are usually good deals on these flights.

As the flight continued, I took my time to write a little, but despite being quite a long flight by domestic Italian standards, at 6:56 descent into Catania began. At 7:03 a.m. 9H-QBG crossed over Sicilian territory.

A smooth sail into Catania continued and at 7:16 a.m. the 737-800 touched on runway 08 of Fontanarossa International Airport.

Deboarding was quite quick and, despite we stopped in a remote position, we did so in a position that was adjacent to the terminal, which means no buses were needed. 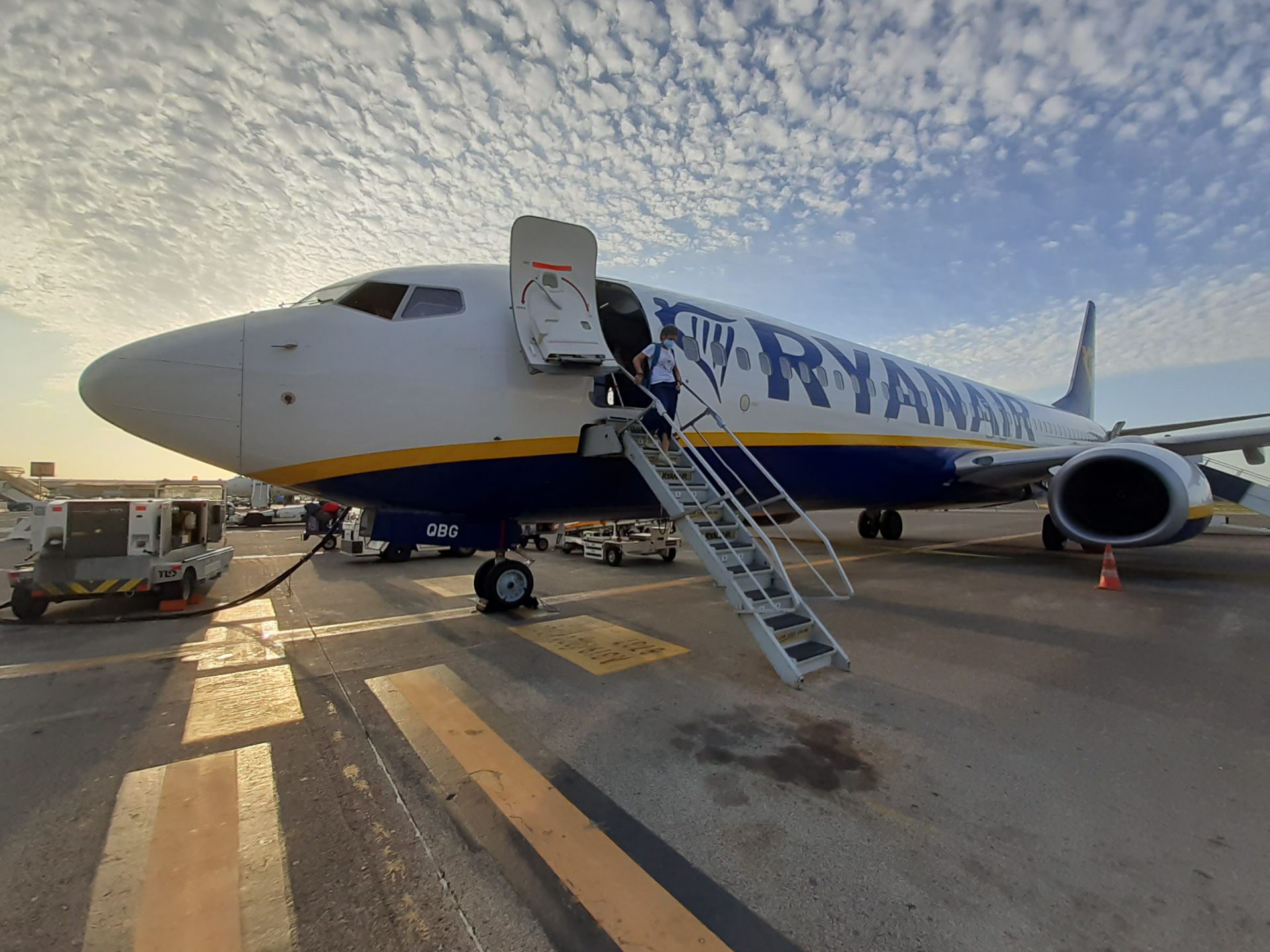 I had a lot of time to explore the airport before my next flight, so I was in no rush. 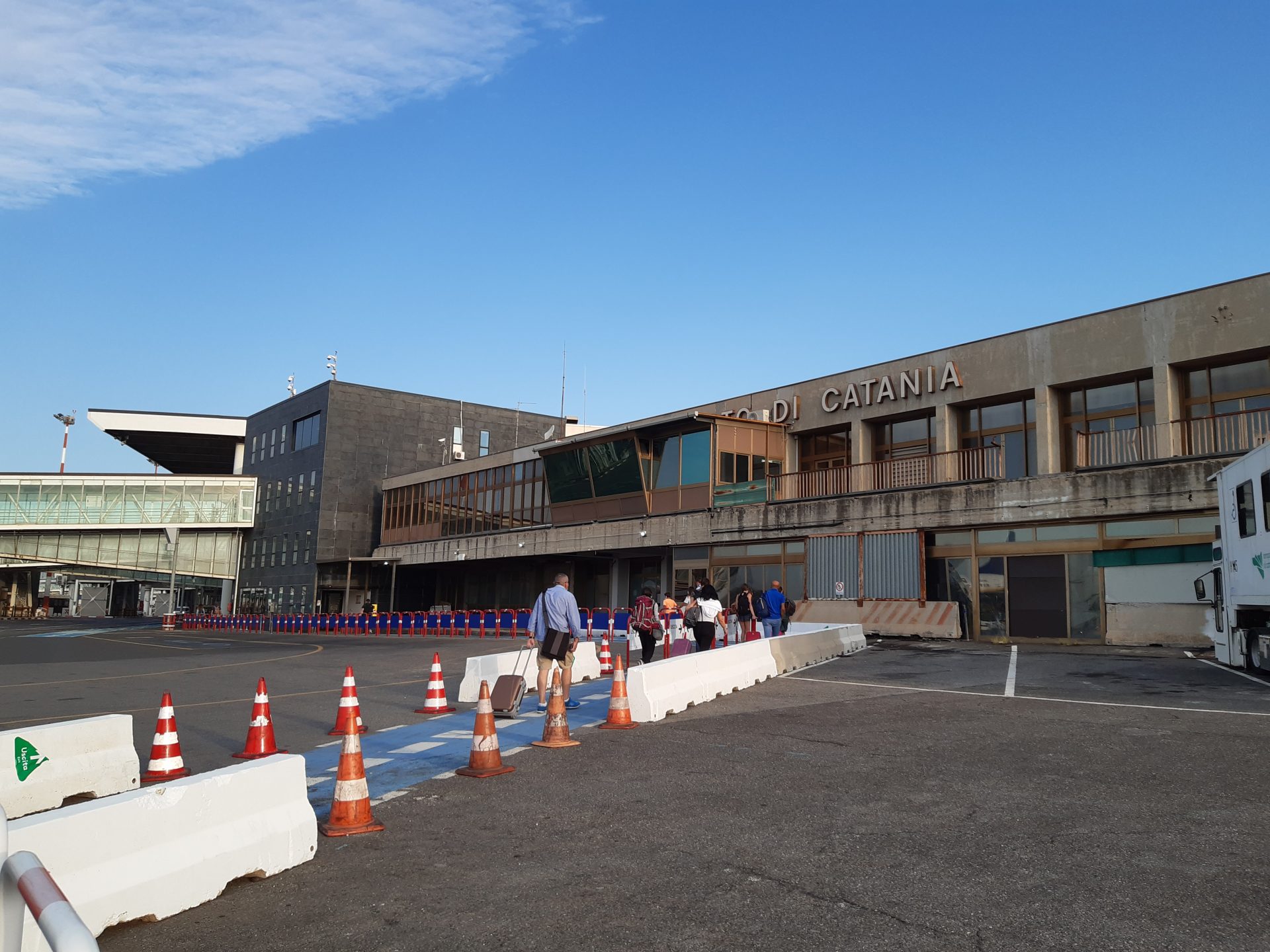 I was quite curious to try Ryanair after so many years of reading about it, and I have to say it was brilliant. Suffice to say it was way better than my first flight with Lufthansa a year ago, albeit that one was operated by their CityLine subsidiary, with an Embraer 190.

The cabin was great — luckily I had the Sky Interior — the cabin crew was very kind to all and the food selection was great and at a reasonable price, which is worth noting given the reputation ultra-low-cost carriers usually carry. I prefer paying extra for decent hot foot than having decent or bad hot food automatically included in my ticket price.

Last but not least, the fare was insanely cheap, even though it was bought just 10 days before the flight. At the end of the day, this is what matters for most passengers, and coupling that with the fact that my flight experience with them as so smooth and enjoyable, I’d rate my first Ryanair flight an absolute success. I seriously hope they’ll keep this track record because I’m sure I’ll benefit from the dozens of destinations they — well, Malta Air — connect to Pisa in the years to come.