The first deliverable COMAC C919, a Chinese-designed narrow-body jet, is now entering the final assembly process at the manufacturer’s Shanghai factory, aiming for a year-end delivery for this highly anticipated jet. China Eastern will be the owner of the first C919, and its maiden flight is projected to take off in the first half of 2022. 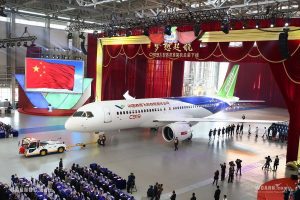 The C919 roll out marked a milestone for Comac. (Photo: Zhang Anchao/Comac)

According to the news shared by the Eastern China division of the Civil Aviation Administration of China (CAAC), the Production Certification Board (PCB) of the division audited the manufacturing plan and overall testing of the jet before the first deliverable C919 entered the final assembly. The C919 was originally planned to be delivered to customers by 2016. However, the timing was pushed back multiple times due to technical difficulties.

Currently, the aircraft has over 900 orders, three hundred and fifty of which are confirmed orders; the only confirmed order from a company outside of Greater China is an order for 10 C919s from GE Capital Aviation Services (GECAS), and the ordered jets will likely be leased to Chinese airlines as well.

The first COMAC C919 completed production in November 2015 and took off for the first time on May 5, 2017. A fleet of six test aircraft are completing certification at multiple airports in China. Like other mainstream aircrafts, C919 has a global supply chain to obtain the more advanced aviation technology.

The Aviation Industry Corporation of China (AVIC) will produce the fuselage and many other components for C919. Additionally, the aircraft is equipped with LEAP-1C engines made by CFM International, the same manufacturer that makes engines for the Boeing 737MAX and Airbus A320neo. The Chinese-made engine for the aircraft is still under development and is planned to enter service by 2025.

Other than AVIC and CFM, Honeywell, Rockwell Collins, and many other leading aviation manufacturers will be suppliers for C919. Leveraging established foreign suppliers for C919 is also one of the strategies of COMAC to have global customers trusting its product.

The C919’s Role in the Global Fleet Outlook

According to the latest forecast by Boeing, until 2040, the global narrow-body aircraft market is projected to need more than 32,500 new aircraft, three times the current on-hand orders of Boeing 737MAX and Airbus A320neo planes. Among the 32,500 new aircrafts, 8,700 will be delivered to Chinese carriers.

New players are joining the competition for the enormous unfulfilled demands of the market. Russia’s Irkut MS-21 is also targeting this market, and Irkut is expected to make the first delivery of MS-21 to Rossiya Airlines, a subsidiary of Aeroflot, in 2022. C919’s entrance to the market will likely not cause any short-term impact to Boeing or Airbus. However, the Chinese state-owned manufacturer is likely to obtain help from the government to push sales to the largest airlines in China, which are state-owned as well. That may cause Boeing and Airbus to lose sales to major customers such as Air China, China Southern and China Eastern, all of which have hundreds of 737s and A320s.

As one of the nation’s most ambitious projects to uplift development, the Comac C919 is certainly bearing the hope of China to demonstrate the country’s rejuvenation. However, with all the uncertainties of international relations and geopolitical situations, only time will tell whether this aircraft can carry the wish of the entire nation to climb through the cloud.