More than 600 days after the U..S.’s travel ban was introduced aimed to reduce the spread of coronavirus infections, arch-rivals British Airways and Virgin Atlantic momentarily put rivalries aside as both airlines departed from London Heathrow to New York’s John F. Kennedy Airport, symbolizing the end of restrictions on travel to the U.S.

At 8:50 a.m.”Speedbird One” and “Virgin Three” both lined up on runway 27L and 27R respectively at the same time, and on the countdown from Heathrow Tower, commenced their take-off roll at the same time, giving viewers both at the airport and online a spectacular view of the two Airbus A350-1000s lifting into the sky at the same time in a historic moment.

And to add a bit of fun to the special day, the two airlines decided they would race one another to see who will land in New York first, with British Airways deciding to take a more northerly route across the Atlantic via Manchester and Northern Ireland. Whilst Virgin decided to maintain a southerly routing to the north of Cardiff, Wales, and then Shannon, Ireland, before “crossing the pond.” 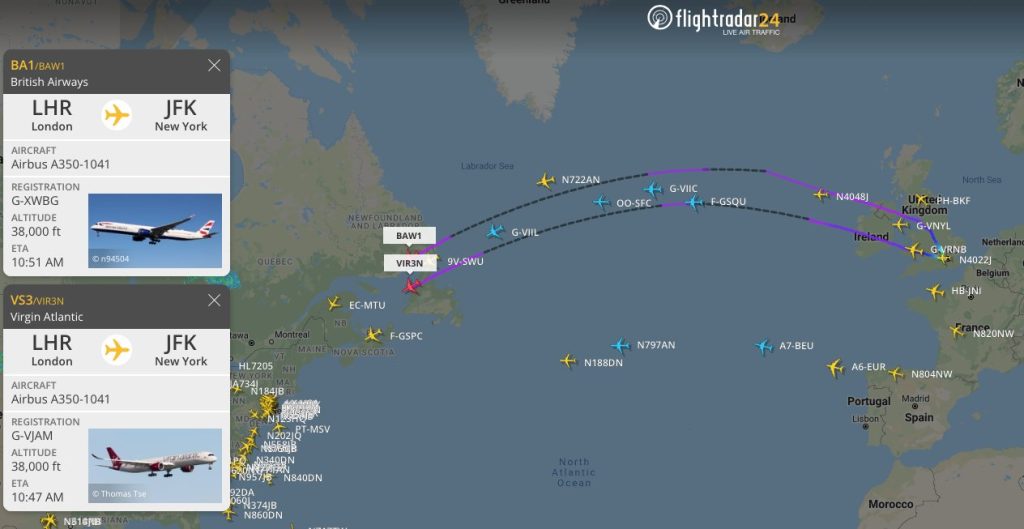 BAW1 and VS3’s routing across the Atlantic, with the former taking a more northerly routing (Photo: FlightRadar24)

7 hours and 58 seconds after departure, “Virgin 3” touched down on JFK’s runway 04R at 10:50 a.m., ahead of its rivals “Speedbird 1″ which landed 10 minutes later. But regardless of who won the race, everyone can count themselves as a winner with Monday’s travel restrictions lifting.

Sean Doyle, British Airways Chairman and CEO was onboard the flight, commenting, “After more than 600 days of separation, today is our moment to celebrate the UK-US reopening. We’re setting aside rivalry and for the first time ever, British Airways and Virgin Atlantic aircraft will be seen taking off together to mark the vital importance of the transatlantic corridor.”

“Transatlantic connectivity is vital for the UK’s economic recovery, which is why we’ve been calling for the safe reopening of the UK-US travel corridor for such a long time. We must now look forward with optimism, get trade and tourism back on track and allow friends and families to connect once again,” he said.

In response to the re-opening of travel to the U.S. for fully vaccinated passengers, German flag-carrier Lufthansa reported that its 31 flights to the United States are fully booked, with Virgin’s 98% full.

Shai Weiss, Virgin Atlantic Chief Executive, remained in London but said in a statement, “Today is a time for celebration, not rivalry. Together with British Airways, we are delighted to mark today’s important milestone, which finally allows consumers and businesses to book travel with confidence. The US has been our heartland for more than 37 years and we are simply not Virgin without the Atlantic. We’ve been steadily ramping up flying to destinations including Boston, New York, Orlando, Los Angeles and San Francisco, and we can’t wait to fly our customers safely to their favorite US cities to reconnect with loved ones and colleagues.”

Under the new rules that came into force, travelers who have received two doses of a vaccine and show proof, as well as having a negative test result taken within 72 hours before arrival are eligible. Any unvaccinated Americans and children under 18 may still enter but must take a test within 24 hours of travel.