The U.S. Department of Transportation granted the airline three weekly direct flights,, which will commence on November 17, 2022 (subject to approval by the South Africa Government). Tickets are currently available for sale.

United started seasonal service from Newark, NJ to Cape Town, South Africa in 2019 and expanded to year-round service this year. The carrier has more flights to South Africa than any other North American airline.

Patrick Quayle, United’s Senior Vice President of Global Network Planning and Alliances said, “We are thrilled to further expand our Africa offering with this first-ever direct link between Washington DC and Cape Town,”

With this addition, United will offer a total of 19 weekly flights to Africa. In addition to these new flights to Cape Town, the airline launched nonstop flights from Newark, NJ to Johannesburg and Washington, D.C. to Accra, Ghana and Lagos, Nigeria in 2021.

“These new flights build upon our existing year-round New York/Newark to Cape Town service – together they’ll provide a near-daily pattern from the U.S. to Cape Town along with connectivity to the broader region through our Airlink partnership,” he added.

United’s new flights also connect Cape Town to 55 U.S. cities, representing more than 92% of the U.S. travel demand. The new flights will also allow customers to connect in Cape Town to other points in South Africa, and other countries in the southern region of the African continent with United’s South African-based partner Airlink and their Cape Town hub. 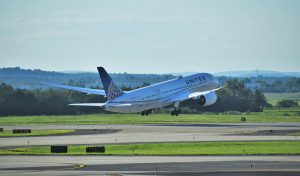 Over recent years, the US – Africa Atlantic corridor, including flights between the United States and South Africa have been subject to the attention and rivalry of two US airlines – Delta and United.

The two carriers have battled it out throwing legal blows to oppose the other from gaining the upper hand with more frequencies from their US hubs to SA’s Johannesburg and Cape Town.

According to a bilateral agreement between the United States and South Africa, US airlines are limited to 21 air service frequencies to South Africa per week.

before the pandemic, Delta held a larger market share of routes to South Africa, for the good part of two decades. Its only competition was South African Airways. United on the other hand had only launched its inaugural flight to Cape Town in 2019.

However, United’s flights to Cape Town gained traction and momentum. In August 2022, United is projected to have a 58% seat share between the US and South Africa, compared with Delta’s share of approximately 42%, according to a data report from CAPA and OAG.

Before United received approval from the U.S. Department of Transportation (DOT) for its three weekly services from Washington to Cape Town, the frequency share between US Airlines for services to South Africa was split as follows:

In February and March 2022, Delta and United applied to the DOT for rights to operate three weekly services to Cape Town from their hubs in Atlanta and Washington-Dulles respectively.

For United, this would provide a near-daily pattern to Cape Town. However, only four frequencies of the 21 allowed frequencies remained. Hence, Delta was vying to deny United from gaining a majority of the seat market share on flights to South Africa.

Saudia for this northern winter season will have available flights between Jeddah (JED) and Barcelona (BCN); with this the company…